I’ve been doing some looking, and haven’t yet found what I was looking for, namely, a 1/35 scale Panzer IV, Ausf F or G, with an interior. Has manufacturer come out with such an animal, and if so, what have been the reviews on it? Sorry to ask what is probably an easy question to answer, but suffice to say my life at the moment is in shambles, and any help to keep my mind on models, rather than elsewhere, would be appreciated! 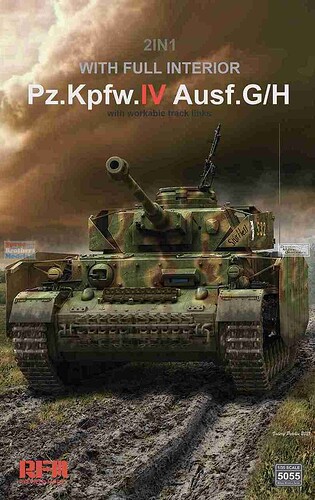 You, sir, are fabulous!! My limited experience with RFM has been really positive, so I’m good with this kit. Many, many thanks!!!

MiniArt also has several Pz IV’s with Interiors. No idea how accurate etc. 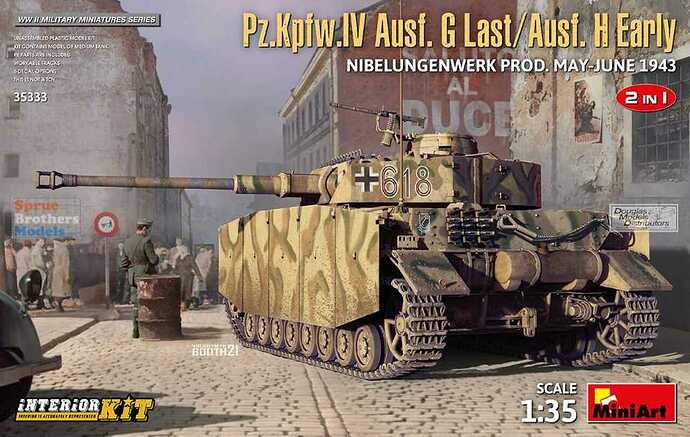 Darn, now you have to make a choice. Check to see the differences between the two versions. One kit maybe better than the other, however I think you would be happy with either.

Considering Miniarts track record so far I am fairly confident that we will see other variants of Pz IV sooner or later.
They have only released 8 variants of G/H/J yet, … So I took a look at Rye Field’s 5055 Ausf. G/H. The instructions are online and that’s what I checked.

I barely know this tank, but I do really understand the intercom. And I know that the G and H had different intercoms.

In the hull, I was surprised to see both systems provided by this kit. The amplifier of the H system is there, plus the switch box and driver’s socket of the G system.

But the annoying thing is: the kit instructions tell you to use both of them. There’s no “optional” symbols. It should be either one or the other. And in the H version, since the switch box is not used and it leaves space on the wall, some other equipment should probably be moved.

Then I went to the turret. The gunner’s intercom box and its wiring is present in the kit. That’s appropriate for the H version, but he should have nothing in the G version. The instructions don’t tell you that.

The commander’s box is provided too, but there should be two different versions. The kit gives you the G version, which has two cables attached. There should be a smaller box, with a single cable, for the H version. The kit doesn’t have that.

So, in conclusion, I think this is an incredibly detailed kit, but Rye Field obviously do not understand the purpose and the usage of the intercom boxes - which leads me to suspect that the rest of the kit also may have version errors.

I built RFM’s iv J. In that kit there were a number, a large number, of parts not used. Even though their instructions don’t use the parts there’s a good chance the parts are in the box. The instructions missed the drivers dash. Nothing mentioned. I scratch built one. Then found the dash on a sprue. I’m far from an ‘expert’ but my research into the iv J had me conclude that there were very few ‘pure’ versions out in the fields.
Yes their instructions are very limited. But aren’t they all?

I haven’t been watching this thread closely, but I see a bunch more info having been added. I appreciate everyone’s input, but I really respect David Byrden’s opinions, whether he is familiar with the Panzer IV or not. That he could identify duplicitous intercom hardware not being identified as optional is a bit disconcerting, however, I am not a Panzer IV expert either, and my purpose in wanting a IV with an interior was just to be able to see some detail with the hatches open. WIth that in mind, sounds like the RFM would still be a good choice for me. Ideally, it WOULD be nice to know if there is a difference in terms of detail between the RFM and MiniArt models, but again, I’ve been happy with my RFM models and I’ve had no experience with MiniArt, except for some figures.

FWIW worth my kits have all been RFM or MiniArt, I would say RFM is a good step or two ahead of MiniArt. MiniArt seem obsessed with small details that will be hidden. So does RFM but not to the same extent. Both have rather vague instructions. RFM details are just that bit sharper.

I built a RFM Panzer iv J interior kit. It’s possible to build it and not glue down the top deck. I built my iv J so the turret and deck lift off to see all the interior. It just take a bit of pre planning.

Great info, Bruce, thank you! That just reinforces my thoughts about going with RFM instead of MiniArt. I also have a bunch of Dragon Panzer IVs also, and I suppose I will get to those some day, but I’m thinking that when I get around to building my first Panzer IV, it will need to be one with an interior. I think I have a IV D, IV F, IV F Vorpanzer, IV H, and maybe more by Dragon, and they are great kits. The Vorpanzer is one of the kits they called a ‘Super Kit’ back in the day, incredible amount of parts. I think I’ve also got a IV D Vorpanzer by Cyber Hobby (also Dragon). I’m always amazed, when I look at the parts in the box of a Panzer IV, at just how tiny these tanks really were. It will be interesting to see how that small volume of space is filled with interior details!

Curt, I would also go with the RFM kit over the Miniart for sheer buildability. The Miniart kits have many tiny parts that break when you attempt to remove them from the sprue. No two ways about it. No such pain with the RFM kits.

I agree with @SSGToms Matt’s view.

I’ve not build a MiniArt but inspecting a few kits and instructions I believe the RFM will be the better build experience for the reasons Matt mentioned.

Thanks, SSGToms, and Armor_Buff, for your comments. Just about everything is leading me toward getting the RFM kit over the MiniArt. I’m sure the MiniArt tank is a great model, but my familiarity with RFM, and the recommendations of most of you, make me think the RFM tank will be the better fit for me. I’ve been building 1/48 airplanes for the last few years, but now beginning to look forward to getting back to armor also, and hopefully doing both!

Keep in mind that MiniArt change plastic supplier a few years back. The newer kits now have nice plastic. On my current bulldozer build I’ve broken 2 items getting them off the sprue. I guess 2 out of 750 isn’t too bad!!

Just recently finished the Ryefield Panzer 4. I chose the G because of the detail with the bolt on armour.
Ryefield did really well to provide the 2 options of the G or the H. The detail within the kit is exquisite.

The box is full to the top with sprues, the engine compartment alone is a full on build for a couple of days.

There is so much in the box and as other people have mentioned there is a lot of parts that will be used as spares.

Here are some images of the Ryefield Panzer 4G in sub sections in the paint line ready to be primed. 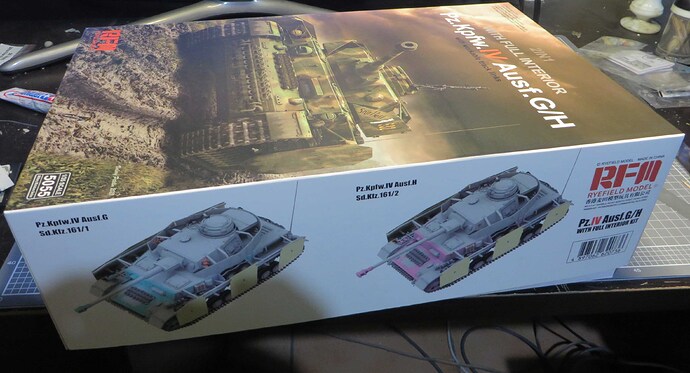 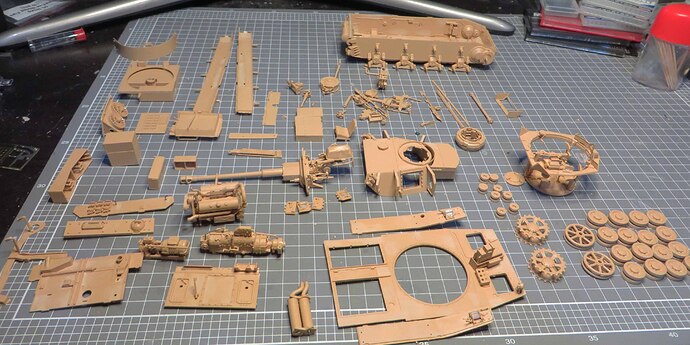 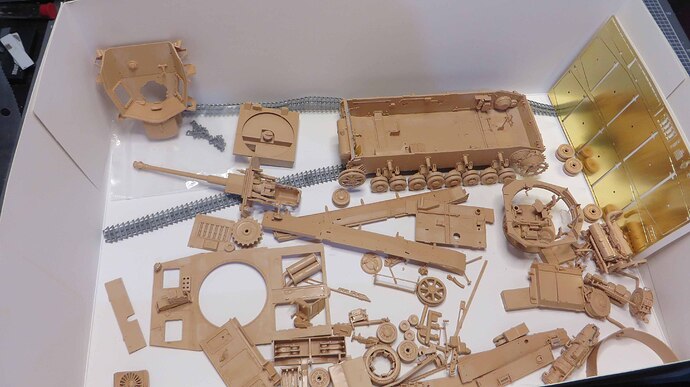 Don’t hold off, grab one of these little gems.

However, it’s a very bad influence on modelers like myself. Only ~35 Pz IV kits in the stash and now I’ll have to buy another one…

@Michael_Walsh: Wow, Michael, THANK YOU for that great post! You gave an ideal description of why the RFM model is the best choice. Thank you for the comments about detail and the photos, too! Your photos alone would be a reason to get that kit, which I am DEFINITELY getting, now. I hope that I end up building my Dragon versions, too, one day, but this RFM interior version looks just too good to pass up! Thank you, again!

Well, everyone, I’ve finally made my decision. I placed an order for the Rye Field Panzer IV Ausf G/H with full interior! I also ordered the RFM upgrade set. I’m really excited about this tank! This is going to be my first really ‘new’ tank, different from anything I have in my collection of tanks. I think it’s going to be really cool to have a full interior in a Panzer IV, something I would never have even thought about, even a few short years ago.

I also ordered a few things that are different than what I had been planning. I have a few AFV Club Shot Kal Israeli tanks, one of which I am going to build as Avigdor Kahalani’s Yom Kippur War tank, but that I saw that Amusing Hobby came out with a new tooling Shot Kal, so I got a few of the Eduard Upgrade sets for that tank, all of these from Sprue Brothers. I ordered the Amusing Shot Kal from a different store, as SprueBrothers didn’t have it, but now I have a lot of new toys coming!! I’ve got to believe that the Amusing Hobby plastic is better that the AFV Club plastic, which I have never liked. I did do an AFV Club 1967 Shot Centurion a few years ago, and it turned out pretty nice, if I do say so myself, but that was despite the brittle plastic that was hard to work on/with.

Thanks again to all of you who helped make me aware of what is out there, and I hope I can do the Panzer IV with interior the justice it surely deserves!