Late last year I saw a build review of this kit in Fine Scale Modeler. I’ve always been a fan of the older Beetles and have also wanted to build a model of one from WWII so needless to say I just had to have this kit. Soooo…my wife got it for me for Christmas. I’ve been waiting for a slot in which to build it so I finally got one here a month or so ago and I had a lot of fun building it. The only real problem that it has is in the windshield fit. There’s alot of sanding that needs to happen with the glass itself if you want it to fit perfectly in the opening. I managed to get it to work for me but it wasn’t without its struggles. I will say this however, you will not find a better Type 82 out there on the market that has this kind of detail along with ease of build. IMO this is the absolute best kit out there for this car.

I simply could not build this car and NOT put any aftermarket items or scratchbuilding into it so I started by adding spark plug wires and fuel lines to the engine, threw a German newspaper in the front seat from Fields of Glory and miscellaneous items like a helmet, map as well as the map bag, binoculars and a bread pouch in the back of the passenger compartment along with a set of glasses laid on top of the newspaper in the front seat from the Mini Art German Equipment kit. I also added a first aid kit on the passenger compartment wall next to the rear seat. The exhaust tail pipe outlet was drilled out as well.

I was originally going to go with Tamiya German Grey as the body color but decided it was just too dark for my liking so I went with, of all things, some Stynlrez grey primer for the body color. After a good coating of Stynlrez I weathered it with an airbrushed coating of Mig Dark Wash which seemed to darken it juuuuuust the right amount. Decals are OOB and after those were applied a very light coat of Model Master Acrylic Flat Clear was applied to the whole body.

Any how…here’s the completed build: 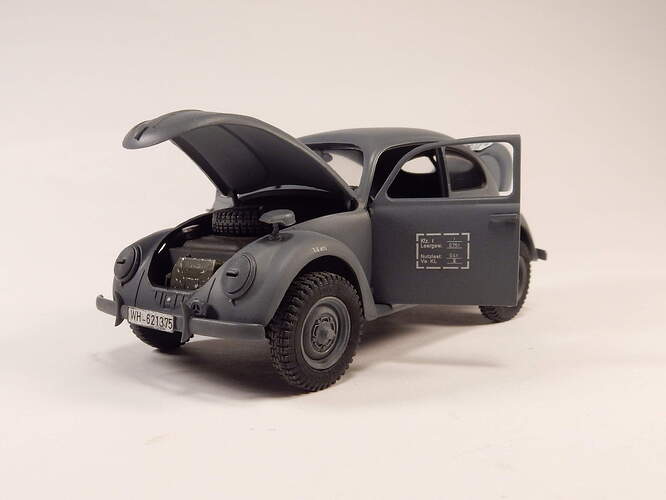 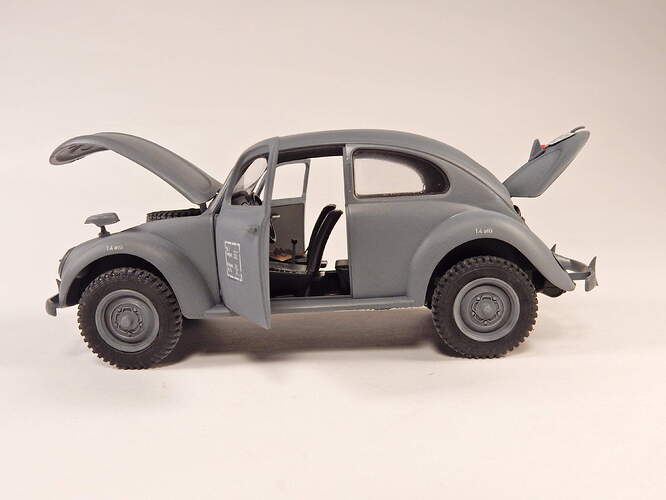 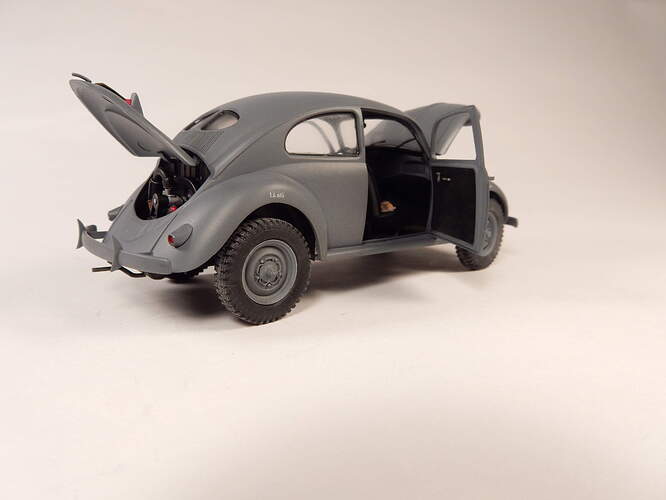 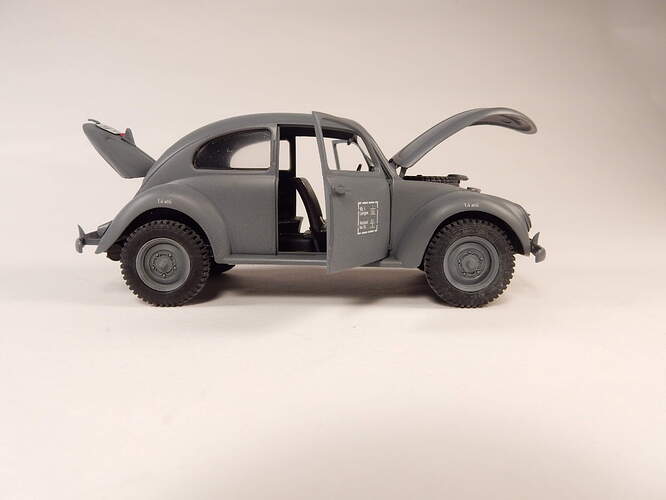 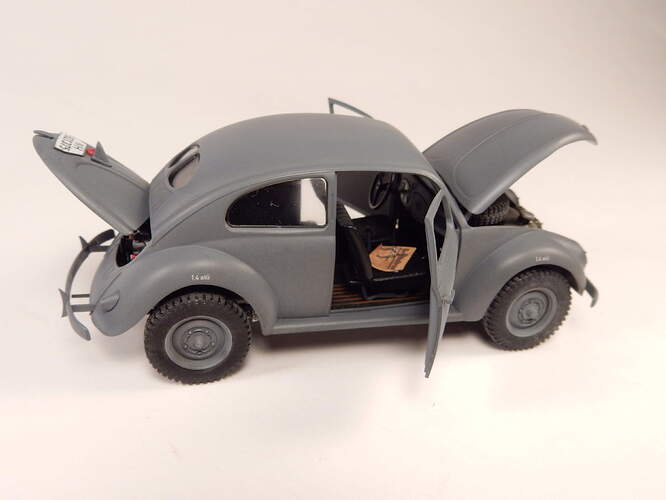 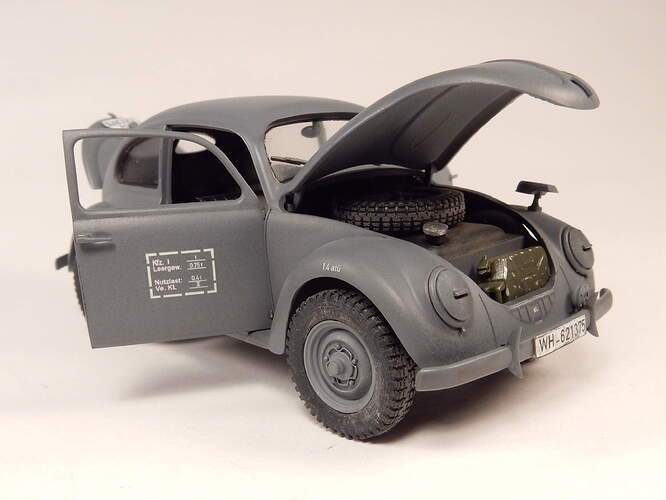 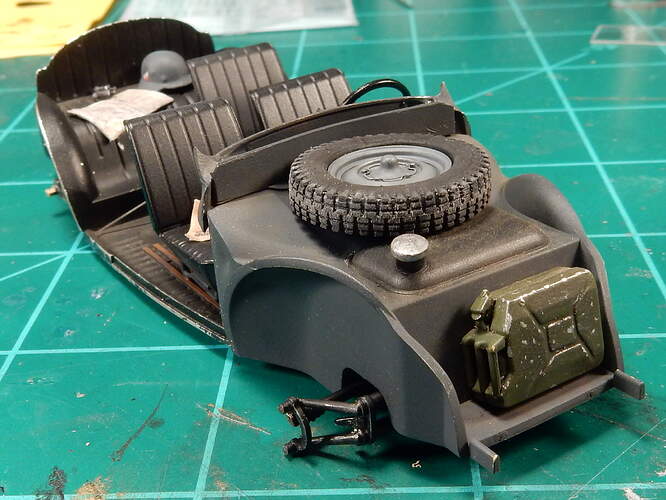 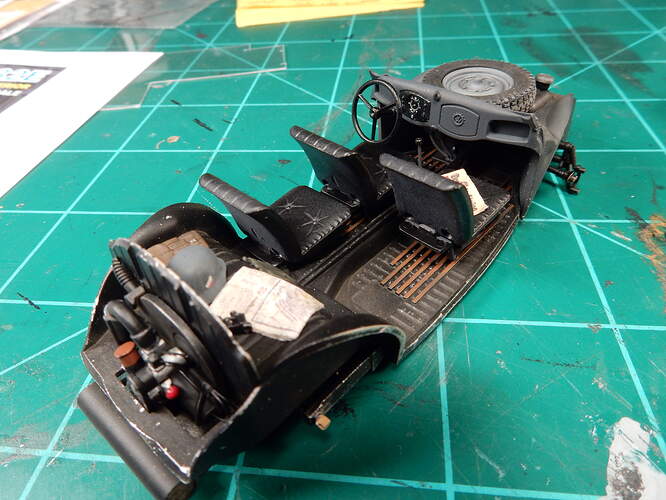 That looks great! I love the interior!

Lot of great work here but I have some comments:

Can we get an engine shot to see the fuel line and plug wires you scratched?

Tamiya’s German Gray is actually a bit too light for Panzergrau.

The small stubs on the bottom of the headlight bezels are too big; really should be not much bigger than the screw used to fix it in place. That is likely what is creating the gap, as there is none on the actual vehicle.

Also a bit disappointed in the wooden floor slats as they cover much more of the floorpan than that, as well as the cooling fan on the engine. I have to thank you for photographing this in a way that let me see most of the assemblies in built form. I am seeing a number of things that will need fixing should I decide to buy this kit, which I am now questioning.

Thanks for the comments panzer modeler and brekinapez!

I really appreciate the honest feedback brekinapez. One of the things I really didn’t like about this was those stupid ejector pin marks under the engine cover/ bonnet and the thing was I didn’t really see it until AFTER I finished the build. That sucks. After seeing the other offerings of the Type 82 (which I don’t think this one is a true 82) this one here is about the best out there IMO. I agree that there are some corrections to be made for sure but again…not as many as the other 1/35 offerings out there. This kit didn’t get the love it truly deserved given the fact that it can be displayed in an all “opened up” fashion but it was a fun build nonetheless. I really appreciate the honest feedback on it. I’ll see if I can drum up a picture of that engine for ya brekinapez.