I like the idea of opening the holds and displaying the cargo. Wish I had the space to do such a large diorama.

Mark - to be honest I do not have the space either but I am just going for it - will figure out where it will go when I am done.

Very impressive progress so far. Its looking like it will be a very well detailed and busy scene. look forward to seeing more progress with it all. Great work

Now that the I-169 is complete it was time to start working the I-36, I will be using the AFC Club I-19 kit to build this submarine. But as usual, before I do here is the history of the I-36. 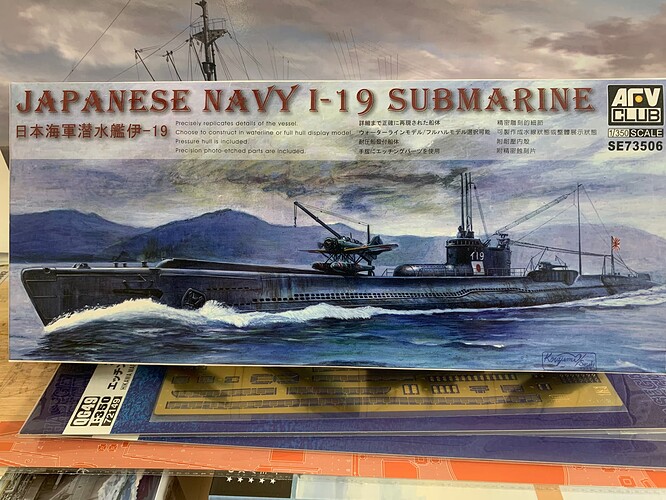 Japanese submarine I-36
I-36 was an Imperial Japanese Navy B1 type submarine. Completed and commissioned in 1942, she served in World War II, operating in the Guadalcanal campaign, New Guinea campaign, Aleutian Islands campaign, and the Marshall Islands. She finished the war as a kaiten manned suicide attack torpedo carrier, operating against Allied ships at Ulithi Atoll and in the Philippine Sea. The only submarine of her class to survive the war, she surrendered to the Allies in September 1945 after the end of the war and was scuttled by the United States Navy in 1946.

Service History
Upon commissioning, I-36 was attached to the Kure Naval District[2] and assigned to the Kure Submarine Squadron.[2] She moved to Agenosho Bay for work-up in the Iyo-nada in the Seto Inland Sea.[2] With her work-up completed, she arrived at Kure on 30 November 1942.[2]

New Guinea Campaign, December 1943–January 1944
While at Truk during December 1943, I-36 took aboard torpedoes, distilled water, stores, and supplies from the auxiliary submarine tender Heian Maru. Reassigned to the Southeast Area Fleet on 18 December, she got underway on 21 December bound for Rabaul to resume her role of running supplies to New Guinea.[2] She arrived at Rabaul on 24 December 1943, and that day aircraft of the United States Army Air Forces Fifth Air Force attacked Japanese airfields in the area.[2] To avoid attack, I-36 submerged and waited on the harbor bottom until the American aircraft had left.[2]

On 28 December 1943, I-36 embarked on a supply run to Sarmi on the northern coast of New Guinea, where she surfaced a half hour after dark on 31 December 1943 and began to transfer her cargo into four Daihatsus.[2] When an Allied bomber arrived in the area, she suspended the unloading of her cargo, crash-dived, and moved out to sea until the bomber departed.[2] She then returned to Sarmi, completed unloading her cargo into the Daihatsus, and got back underway, returning to Rabaul on 2 January 1944.[2] While she was there, a routine inspection discovered significant erosion of the tiller for her stern planes.[2] As a result, she received orders to cancel her next supply run and return to Japan for repairs.[2] She departed Rabaul on 5 January 1944, was reassigned to Submarine Squadron 1 on 6 January while at sea, called at Truk from 9 to 10 January, was attached directly to 6th Fleet headquarters when Submarine Squadron 1 was disbanded while she was at sea on 15 January, and arrived at Sasebo on 16 January 1944.[2] She entered drydock there on 17 January 1944 for an overhaul, during which workers installed radar aboard her.

I-36 was selected on 1 September 1944 for conversion to carry kaiten manned suicide attack torpedoes.[2] She took part in kaiten launch exercises off the kaiten base at Otsujima in Tokuyama Bay on 28 September 1944,[2] and by October 1944 her 140-millimeter (5.5 in) gun had been removed to make room for fittings that allowed her to carry four kaitens on her after deck, two of them with access tubes allowing their pilots to man them while I-36 was submerged.[2] On 7 November 1944, the commander of the 6th Fleet, Vice Admiral Shigeyoshi Miwa, informed the crew of plans for a kaiten attack on the United States Third Fleet anchorage at Ulithi Atoll.

The I-36 conducted 5 Kaiten mission before the end of the war.

End of war
Undocked early on the morning of 6 August 1945, I-36 moved into the harbor at Kure and moored to a buoy.[2] Later that morning, her crew witnessed the atomic bombing of Hiroshima.[2] She was in the Hayase Seto Channel in Hiroshima Bay on 11 August 1945, preparing to get underway for the submarine base at Hirao to participate in the Shinshu-tai (“Divine Country Unit”) kaiten mission when two Iwo Jima-based U.S. Army Air Forces P-51 Mustang fighters subjected her to a strafing attack at 10:40.[2] The attack wounded her commanding officer and navigation officer and damaged a diesel fuel tank and a radar.[2] Repairs were estimated to take eight days.[2]

On 15 August 1945, I-36 and I-47 were at Kure when Emperor Hirohito made his surrender broadcast announcing the cessation of hostilities between Japan and the Allies.[2] I-36 was the only Type B1 submarine to survive World War II.

So here is the upper hull from the box

And here it is after some demolition. The intent is to highlight some of the features such as the lifeboat which was stored under the decking forward of the sail. 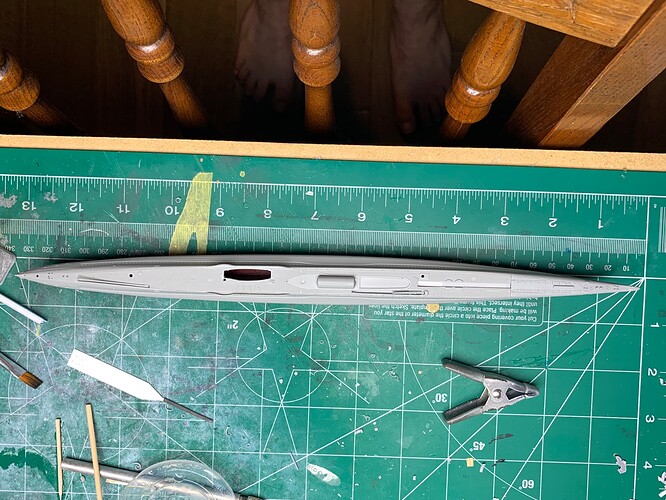 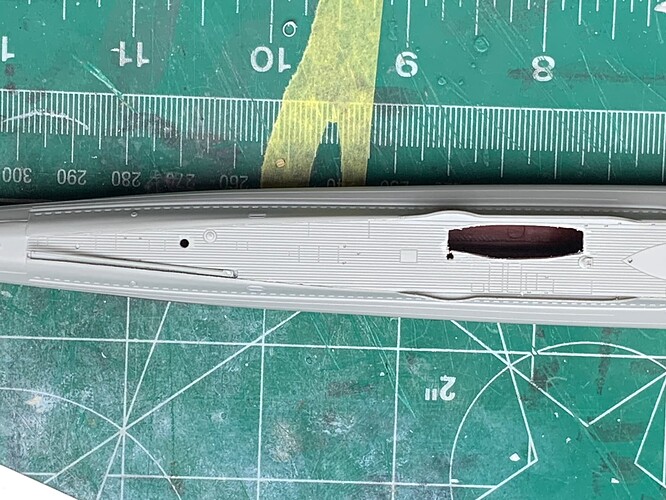 That is about as far as I got with this build but there will be more to come.

Thanks for stopping by and as always, comments, suggestions and criticism are always welcome.

And the back story for each vessel is a nice touch …

Wow Dave! What a cracking project!

So glad to have you aboard for the journey!!

Hey everyone - while the majority of my time off was spent on the Tama I did take a day to work on the I-36 using the AFV Club I-19 as the base kit. The PE upgrade set for the I-19 from AFV Club is not longer available so I used some of the Eduard PE from the Pit Road I-58 Upgrade set. There are some fit issues that will need to be worked out but in the end it provides some of the details that I was looking for.

The first step was to scratch build the storage area for the 7m cutter located aft of the conning tower. 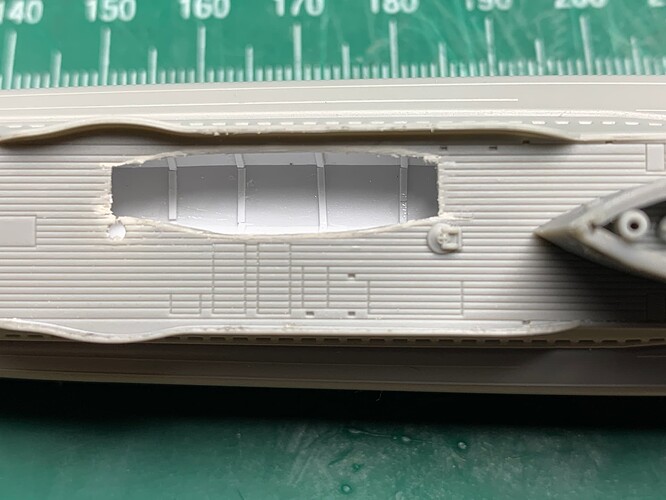 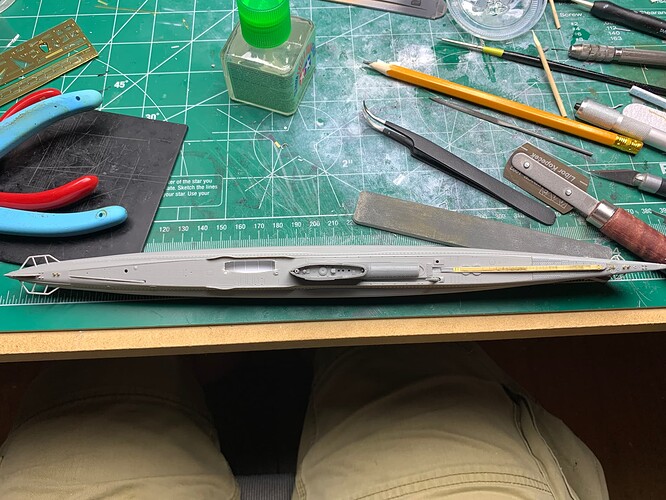 After that I changed out the molded bollard for some turned brass - affixed the conning tower and laid down some paint. Hind sigh being 20 / 20 I should have left the conning tower off until later but oh well - ill take that approach when it comes to completing the other I-15 class subs that will be included. 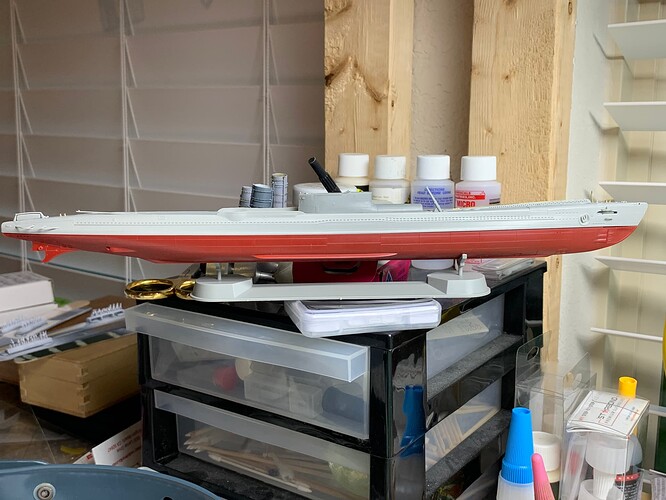 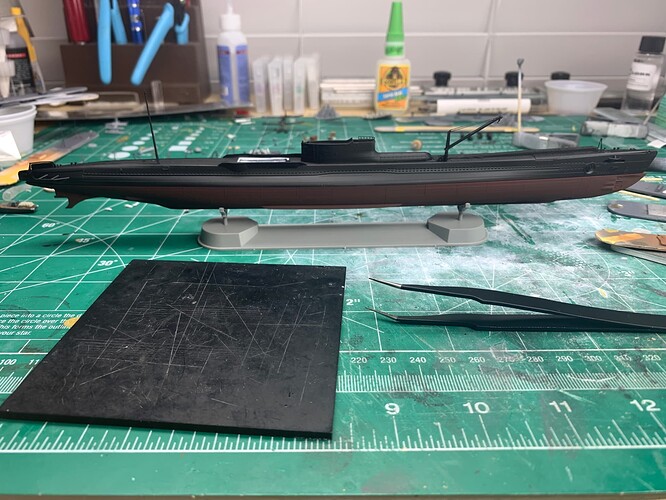 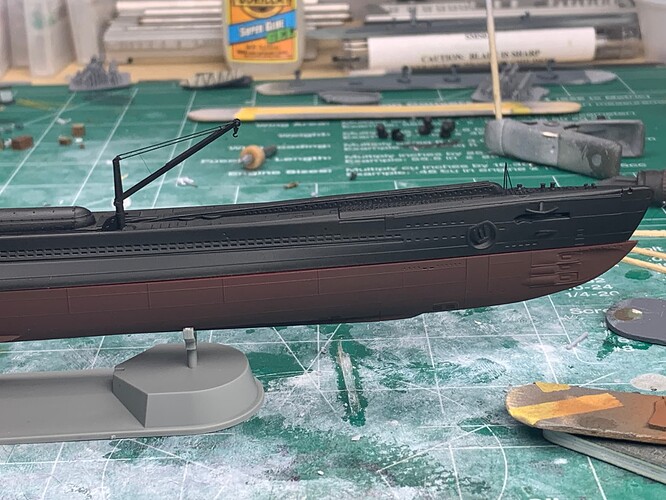 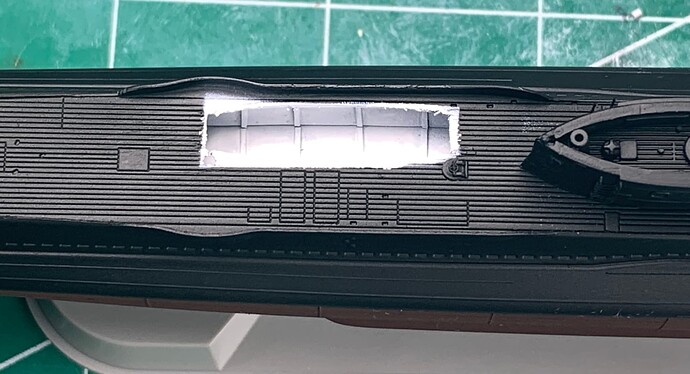 I really don’t want all of the submarines that will be included to be the same grey and since there is historical evidence the IJN utilized black on some of their submarines I decided to leave the I-36 as well…black.

I think this is my first kit that I have painted all black so there will be a learning curve with regards to weathering and color variations along the hull - should be fun.

This is as far as I got - the next steps will be to add the wooden deck and finish the overhead cover of the conning tower.

Thanks for stopping in and as always comments, suggestions, and criticism are always welcome.

It is all looking really good so far and has the makings for a great Dio… What will be the rough base size that they all sit on ?

Johnnych01 - If I remember correctly the sea-base is about 23’ long by 14" wide- I already have the wooden base cut and stained - the foam base is also cut but no color has been applied yet. I’ve been toying with the idea of using magnets along the sides to add the framing while keeping the option of expanding the diorama in the future. I have a general idea of how this would look but time will tell if it will be successful

While my wife was working last evening I grabbed a few minutes to add the wooden deck to the I-36. I used the Artwox wooden deck for the I-27 but since the I-36 and the I-27 are both I-15 B1 class subs the wooden deck fit without issue. Follow on will be to used a dark wash to dirty up the deck. 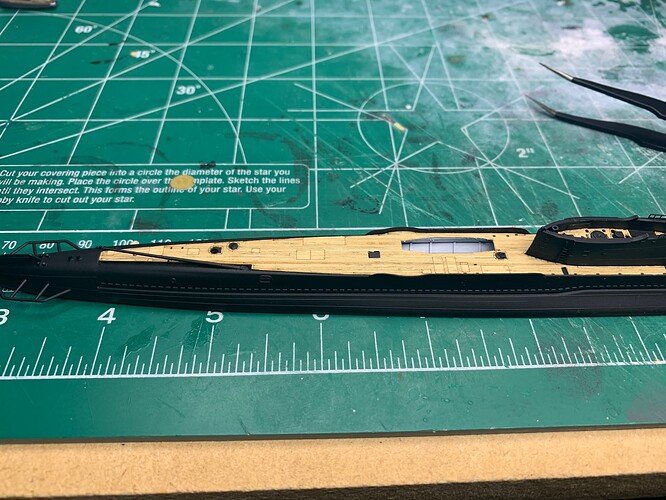 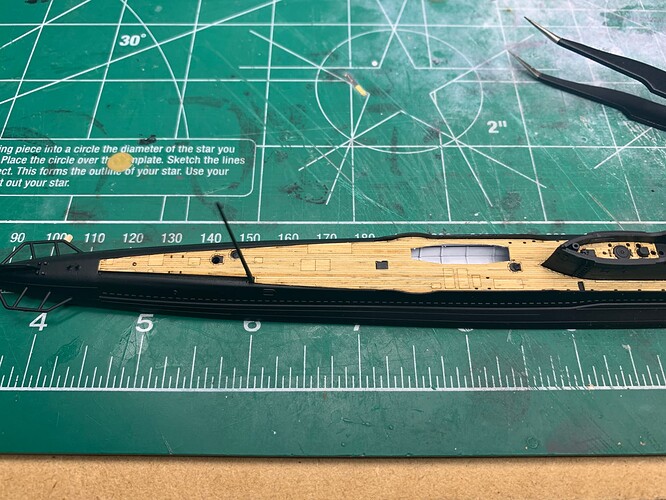 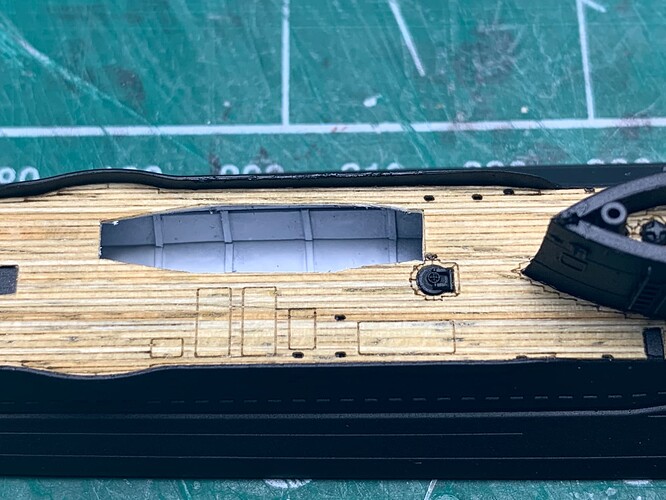 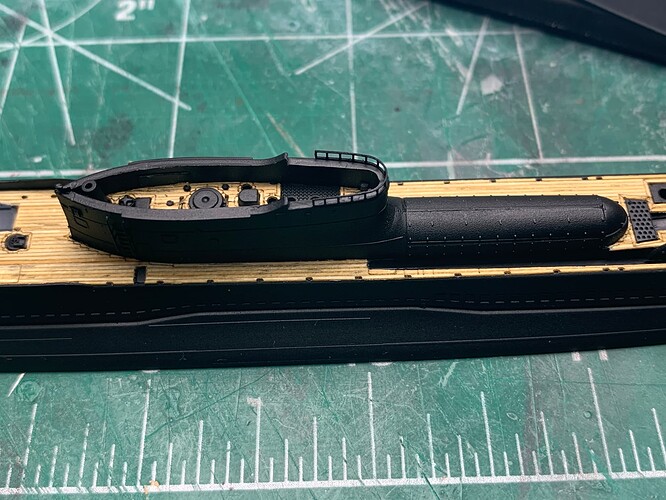 Thanks for stopping in.

She is shaping up nicely, but I think I liked the deck when it was painted black. The wooden deck addition is a nice feature, but it really stands out against all of that black.

Mark - Thank you sir!! I completely agree with your thoughts on the deck. If I have time this evening I will apply a wash of AK interactive dark wash for wooden decks which should tone it down. If not I may just go back and apply a layer of black.

Finally got a few minutes to darken the deck of the I-36, here I uses AK Dark Wash for Wooden Decks - pretty happy with the results but might go back and either darken a few spots or try and lighten a few spots - kind of torn between the two. 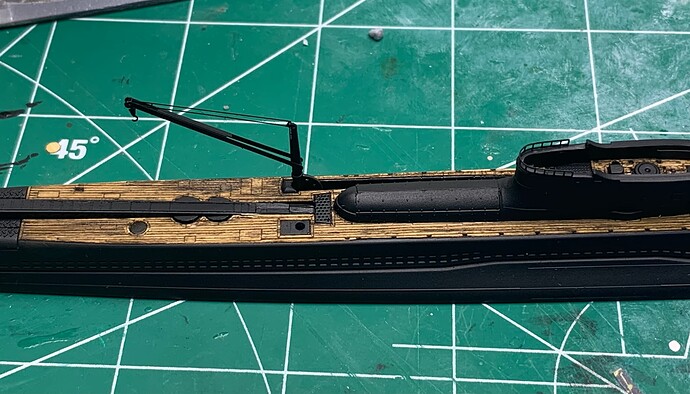 Lovely contrast between the black and the wooden decking … looks menacing like that.

Thank you all for the comments

@HGBARNES - not sure oily was the look I was going for but now that you have pointed it out I have to agree, need to go back and dress it up.