I bought this kit during the spring time of 2015 for a project to do with my son. I bought one for me and one for him to build together at the same pace. After we got started we both realized that this wasn’t the kit to have a beginner on so I shelved it and bought something a little easier for him. The reason behind this build was a meeting with my mentor at a church function we had over early summer of 2016. He used to build models but cant any longer due to a slight shake he has in his hands which makes him unsteady. I had asked him what his favorite WWII aircraft was(because he’s into that kind of stuff) and he responded almost right away with “The Corsair”. I kept that in the back of my head until September of that same year when I put the wheels in motion on building this kit. What I didn’t know was just how much of a challenge this build would be with all the gaps, misfits and alignment issues. I literally slaved away on this thing to get it done in time to present it as a Christmas gift for him with anywhere from 30 min. to 4 hours a day being spent on it. This is the kit I’m talking about to give you all a visual (and to properly warn any innocent bystanders out there) of what I bought. 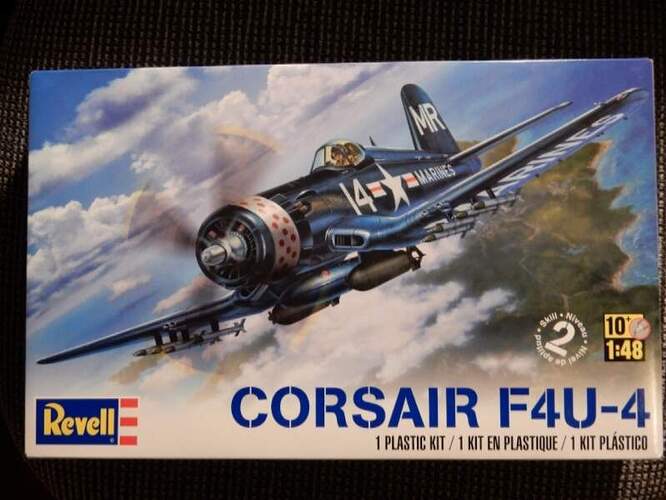 The fit issues alone where enough that I actually had the thing in the trash can… twice! I knew if I did what I wanted and went for the Tamiya 1/48 kit that I would have had a lot better looking build with more detail but I wouldn’t have been able to finish it by Christmas because that’s how I am. So…it got rescued from the trash can both times. The more detail, the more time it takes to get it done. I built her as flown as part of Black Sheep Squadron VMF-214 operated off of the USS Sicily (CVE-118) , Korea in 1951.The only things I added were a set of seat belts to the seat, some resin 500lb bombs, and some wheels & tires from the Eduard F6F Hellcat kit. 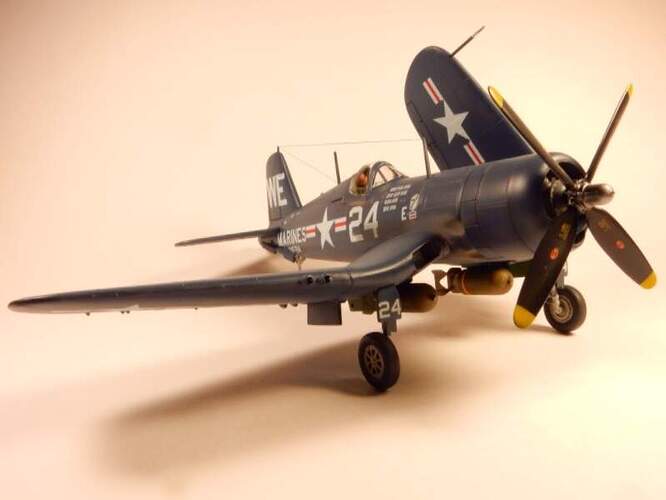 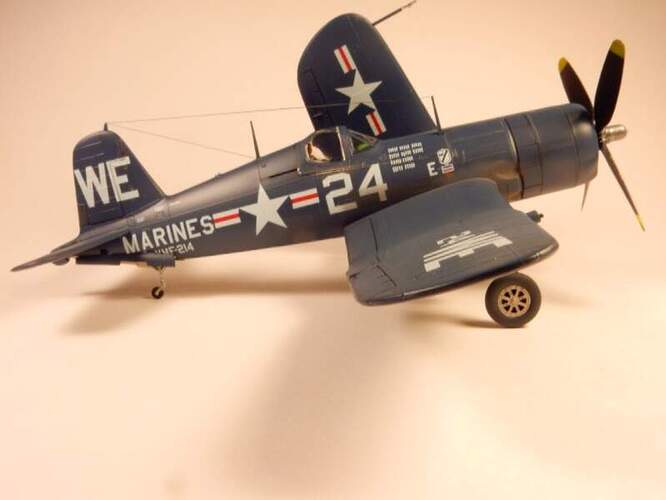 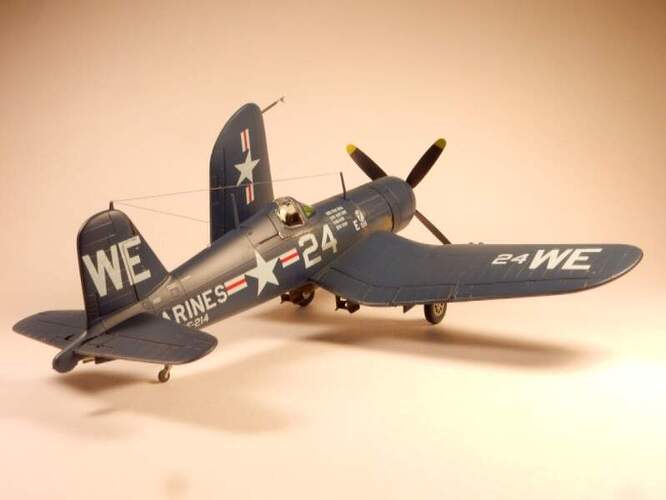 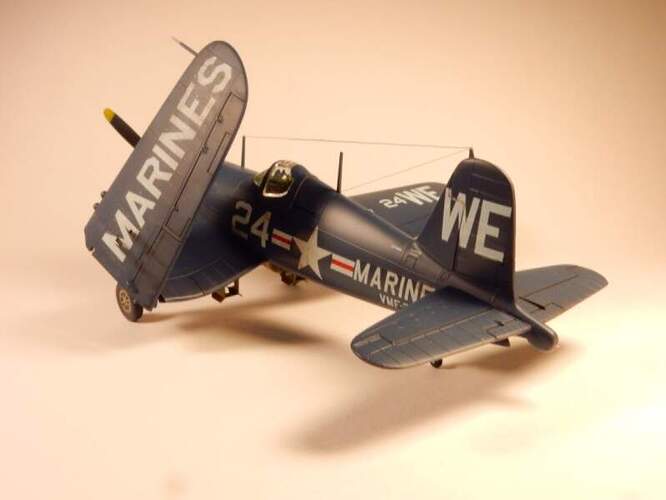 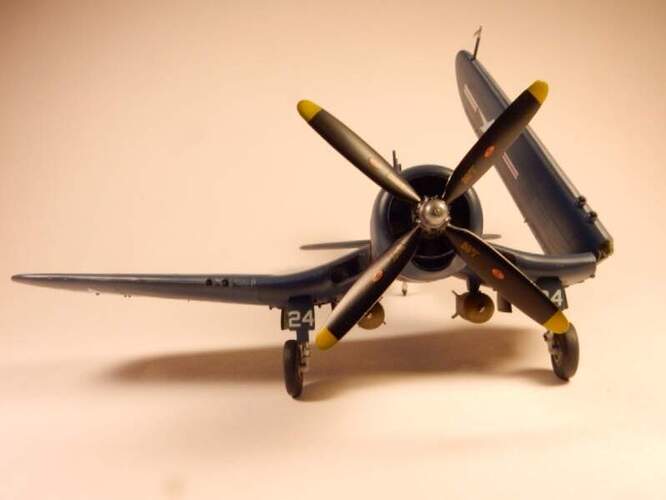 and a shot of it on the display base without the acrylic glass top on it. (It’s actually a shadow box with the glass removed, mirror cut to fit and a acrylic glass top made by a local plastic glass shop. You should have seen the look on his face when I gave it to him for Christmas. It really didn’t matter about the fact that this wasn’t my best build but the look on his face was priceless ! 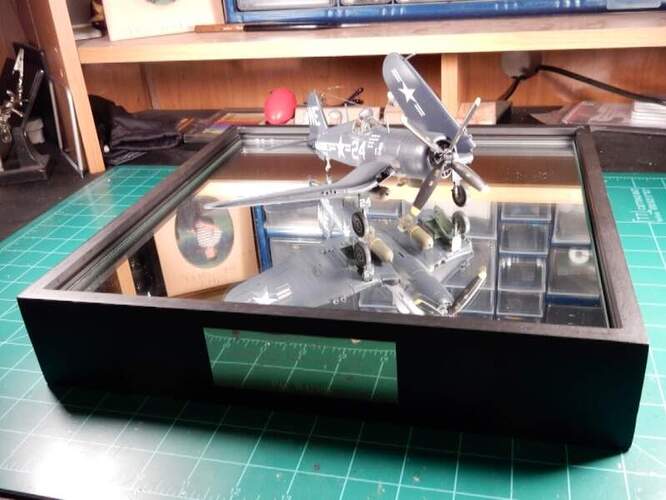 Forgot the shot of the cockpit. Pretty basic. Left it OOB except for some seat belts. Accurate? …No…but I didn’t opt for too much snazziness on this build. 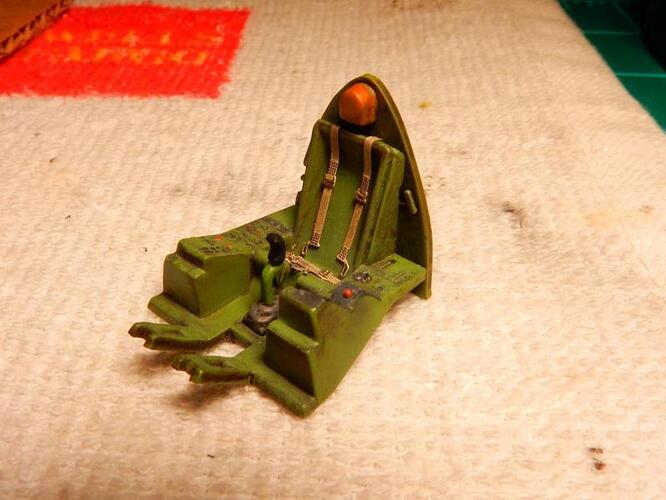 Looks like you pulled it off OK . Is this the ex Monogram kit ?

Yesiree. I put all these old kits together when I was a kid but didn’t remember the Corsair as being that bad.

For sucha old kit you did a really good job!
A++

My most memorable Christmas as a boy centered around these Monogram 1/48 kits . I had one or two on my list but I got ALL of them ! I must have been a good lad that year - I’m certain my older brother and sister thought otherwise - or my folks (Santa ? ) must have been flush that year .

Hey Joseph! Good thing you rescued this bird from the trash as you’ve done a great job!

Man, you’re a champ for pulling this one off as you did… whoa! I love it!

Thank you guys very much for the “likes” and the replies! This was a bittersweet victory for me. One one hand I was pleased with the outcome from such a dated kit and on the other I wished I would’ve built a Tamiya but then again…I’m glad I didn’t because my skills weren’t on the level with such a good kit. I do have a Tamiya birdcage kit in the stash though…