Here is a little fun project I knocked out in between work on more serious efforts .
This will be a surprise gift for a lifelong friend - one of the world’s true free spirits who always chooses a different path - case in point , his airplane .
Bought it without knowing the first thing about aviation but two years and $$ later he has soloed and working his way to his ticket .
This is the Minicraft 1/48 Piper Cherokee which I modeled and painted to represent my buddies aircraft . The kit is terrible ( and I am being generous with this assessment) . Fuselage and wings / tail not bad but the rest can best be described as general blob shapes combined with poor fit . The kit is a 140 but my friend’s plane is a 180 so I had to add the rear windows . My brother in law made the masks for the civil codes and the rest is old school tape masked /painted .
I had some scrap clear acrylic plastic around so I made a base and case . Upon completion of gluing the case together I promptly splashed cement on one side so made a panel to represent his hanger out of illustration board . A resin Japanese ground crew figure has been transformed into the man himself .
I think he’ll get a kick out of it.
Mahalo Brah ! 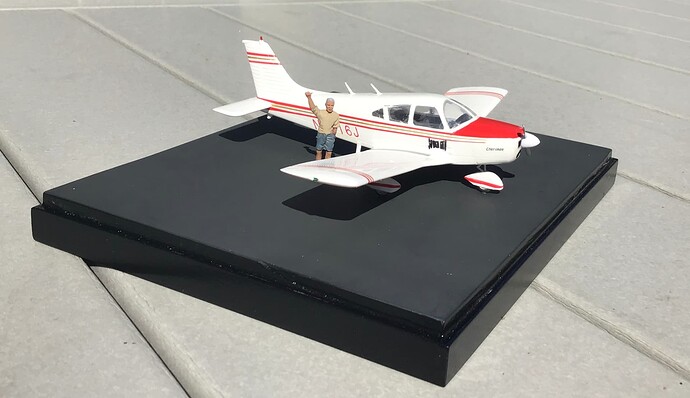 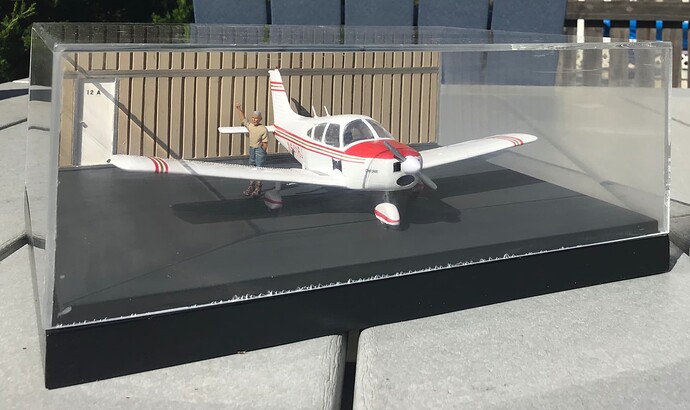 That’s a really cool build. I’m sure you’re friend will love it.

Very nice little thing. I am workign on somethign similar an SF-260 Marchetti in1/48 scale