A reason to check out the clearance racks

Here is a good reason to check out the clearance racks. I was at hobby lobby and found this on the rack for only $14.99. Reason it was missing the paint. and the Needle cap, which I bought at Hobby Lobby for about $7.00… so I took it home and tried it out and worked perfect first time… so I think I got my Deal of the Year this time… LOL 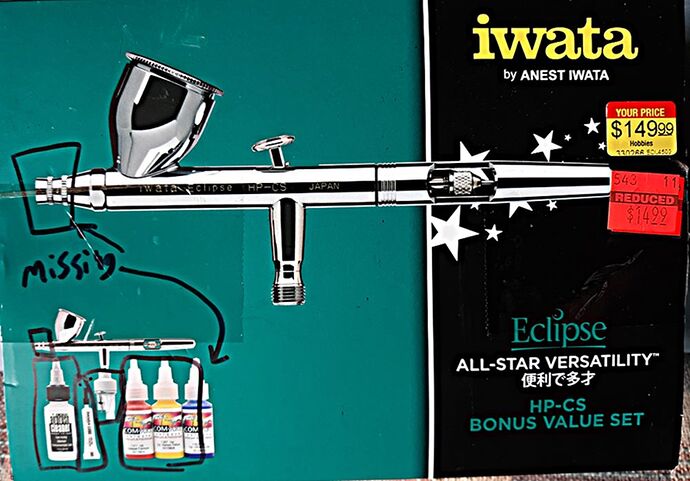 Now that’s the deal of the century!

Makes me want to go to Hobby Lobby:)

Congrats on a great deal. I would have jumped on that one also.

Attaboy ! Better buy a lottery ticket while your karma is strong …

SCORE!!! Goal!!! Touch down!! Hole in one!!! Home run!!!
Be careful, I think you used up your luck allotment for most of the coming year.

and I thought I stole mine! Mine was $149.99, and then used the 40% off deal! (another $60 off) Later I bought a Silent Air compressor from them that was on sale, and I sked if I could use my 40% off coupon? There was an arguement between the sales folks and the manager stepped in and gave me the deal. I ran out of the store before they changed their mind.

One I’ve beat my head against the wall over and over about was a Grex pump and air brush kit that had the hose and pistol grip brush. It was $347, and had been on the shelf for eons. Went home and checked to see what they cost at Spru Brothers. Went over there in the afternoon and it was gone! It was close to $150 cheaper!
gary