O.K. , All you Abrams crewmembers. What is the reg(s) on stowage on the turret blow out hatches. I’ve always been lead to believe it is a big time No-No. Added weight would slow down their popping and result in the blast getting into the turret. (True an Igloo with a couple 6 bpacks of Pepsi probably wouldn’t do much, but a couple 120mm ammo boxes with gear, half a pallet of MREs and 3 or 4 cases of Avian water …) Arguing with a knot head ,who’s experience is playing WoT (admittedly I am a Civilian E-Nothing, but I listen to my betters). Would like something official to hand him before I tell him to get back under his bridge, the goats are coming.

I was never a tanker myself. But that area of Abrams is commonly seen in photos piled high with cases of MREs, water, personal gear, etc.

Edit- if there is a reg or SOP against that practice, it is commonly ignored.

Same I agree with Carlos, I’m not a tanker either but ill get back to you in five years when I hopefully am…

I hope you’re not planning on becoming a Marine Corps tanker, Ezra.

I suspect that is at NTC , but … Besides the ammo blowing into the turret, how is the wind sensor s’pose to work with all that crap blocking it? (and they wonder wh they missed that T-90 by a klick.) 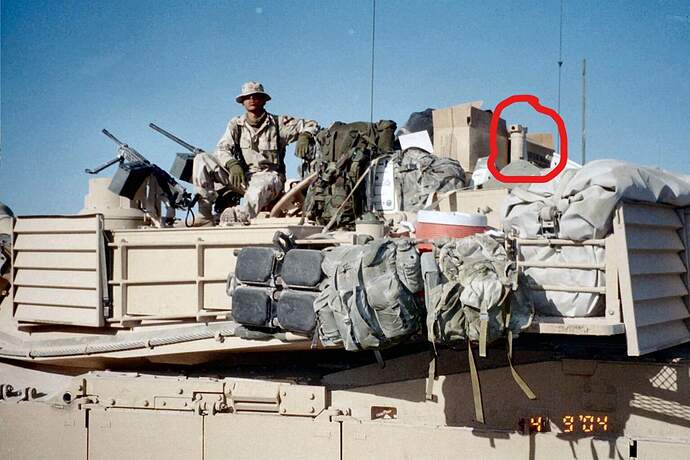 Gunny will train the boy right, I’m sure … “I got my eeeeye on yoooou, Pyle…”

I have to say this is something I have often wondered about is to the amount of external crap I have seen in models and real life pics of not just US heavy armour but other countries as well.
We never used to have an excessive amount of external kit on show. And the same goes for most images of Leopards that you see. All our kit was in either the external bins / baskets or inside the wagon… I get that wheeled wagons and some tracked IFVs with more men will run out of space so external storage comes into play more. But I don’t get it on a 4 man crew on an MBT ?

The problem being that currently the MC has no tanks anymore so that’s not a great career choice.

He would have to go Army and honestly if you look at the trends it might not be a safe career move in the Army either.

It’s been a long time so I may be forgetting but I don’t recall any regulations for storage. At the end of the day I don’t think all the things you listed on top would have an impact on the panels not working. The explosive force are going to find the path of least resistance, that will be the panels as designed. The weight on top even if heavy is not secured the same as the interior turret so it will move. Best to have combined forces to avoid testing that method.

Besides the ammo blowing into the turret,

I am not following you there.

Don’t recall all features of that wind sensor (I think there is three types) and ballistic tables but it grabs more then wind data and it still can grab that data. Wind towards or away will not impact the ballistic that much as the speed and weight of the round is different then a rifle round that can be more easily affected by atmospheric forces. If your missing more then a click something is really wrong and you probably shouldn’t be firing the main gun. My experience has shown your more likely to miss the target because you didn’t zero your sights especially the gas sights every day like your supposed to then computer miscalculating the ballistic data from a blocked wind sensor.

Unlike the Leopards and other vehicles the Abrams has very limited storage space inside (like none) and only two external bin that is packed already with tools and other items for the tank to function. All personal gear has to go on top. The rest I believe is the function of the mission and what your supply chain looks like. If your going out on a day patrol from a forward operating base vs assaulting on move like the opening days of the war your needs are very different.

We always stored on the blast panels. There isn’t a lot of internal storage on the Abrams tank, so everything goes in the bustle rack or on top.

Hahaha nope not Marine corps as they are getting rid of there tanks, so probably Army or National Guard. I want to be either in Abrams or Bradlys.

they are getting rid of there tanks

They are all gone as of this summer is my understanding.

My suspicion is that any time your blast panels come into use, you have problems way beyond what happens to your gear on top of them.

Quote @loncray
My suspicion is that any time your blast panels come into use, you have problems way beyond what happens to your gear on top of them

Sluff, that image is from Iraq, according to Prime Portal

I haven’t been to NTC in close to twenty years, but I sure don’t see any MILES belts on that Abrams. And nothing or nobody on rotation went into the box without MILES on. Aside from the large maneuver area, the MILES network at NTC to allow for analysis of each exercise is the whole reason for that place.

I have to say this is something I have often wondered about is to the amount of external crap I have seen in models and real life pics of not just US heavy armour but other countries as well.
We never used to have an excessive amount of external kit on show. And the same goes for most images of Leopards that you see. All our kit was in either the external bins / baskets or inside the wagon… I get that wheeled wagons and some tracked IFVs with more men will run out of space so external storage comes into play more. But I don’t get it on a 4 man crew on an MBT ?

Each US GI is issued enough uniform items and gear to fill two duffle bags and a rucksack. The packing list for a deployment is pretty long. Add in extra things like personal snivel gear, boots, other things to make your deployment a little better… it all adds up

it would be the power pack to let go first along with the suspension. Knowing what the overbuild factor that TACOM calls out (note: not every spec can be met), I’d say the hull is good for a realistic eighty tons. The gear box alone will handle 7,000+ ft.lb. of torque without any undo damage. The engine is rated for 1500 shaft horse power, so it’s not a power issue. Every transmission is tested behind a V16 locomotive engine that is run pretty much wide open about a third of the time. If you ever saw the gears that take the input power you’d have a stroke! Yes they’re pretty big, but that’s a small part of the equation. The machining specs are a monster in itself. Plus they’re not a JIC standard profile. Then after they are cut, they go thru a couple processes which only make them better. After that they are beautiful, but still not a finished product. Won’t tell you, but it increases the power handling and noise reduction about 25%. That hydrostatic drive is what you see in the variable speed and one track going the opposite direction as the other. One machining process is held to .4 arc seconds alone. In the end, I’d say the torsion bars are the weak link, and that’d be in the eighty ton weight range.
gary

when a tank goes into combat, everything you own is in or stowed on that beast. There ain’t gonna be a five ton truck loaded with your CD players and stuff following behind you! Even the cot you sleep on is stashed somewhere (how come tankers got cots?). If a truck does show up, he’s loaded with ammo and food; the heads back home at a very fast clip. Fuel is flown out in blivits, and a few other things like oil and maybe spare part here and there.

You almost always see those guys with at least two cases of food. There’s a good reason why. Jack rabbits are just too tough to eat, and rattle snakes are a pain to catch. So why? Mostly weather related. A big storm rolls thru, and you don’t see a resupply for two or three days.

Stik noted what you were issued at the start of the game. By midway half that’s gone or used up. I was down to three pairs of socks and a pair of pants and two tee shirts (my Mom sent) plus one long sleeved shirt that was full of fleas. Two pairs of boots after six months meant one is DX’d and never replaced. Just the nature of the game of mortal combat. When it rained everything is wet! Even the snakes move to high ground. CAV units wear out the track Sargent getting them pulled out when they get bogged down (I’d pass on that position!). Then it quits raining! Then gets hot, only to get hotter. Least your kinda dry for a change.

A guy once laughed at my generation for carrying huge ruck sacks in the bush. He failed to realize that your taking the battlefield to the enemy’s home, and you can’t run back and get some more stuff. You take what you think you might need, and maybe some more.
gary