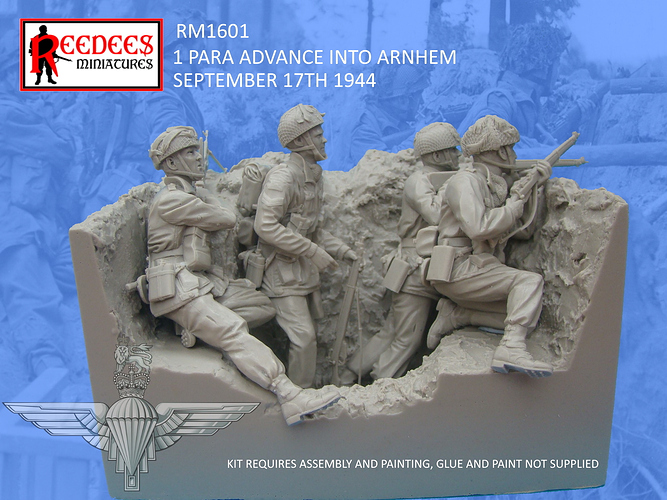 This excellent vignette, first in a series, was recently sculpted by Steve Reedees and is now available through his website. The historical photo below was used as his guide in creating this scene. It’s not too often you find vignettes in 1/16 scale that are directly related to an actual photo and I think Steve pulled this one off superbly. 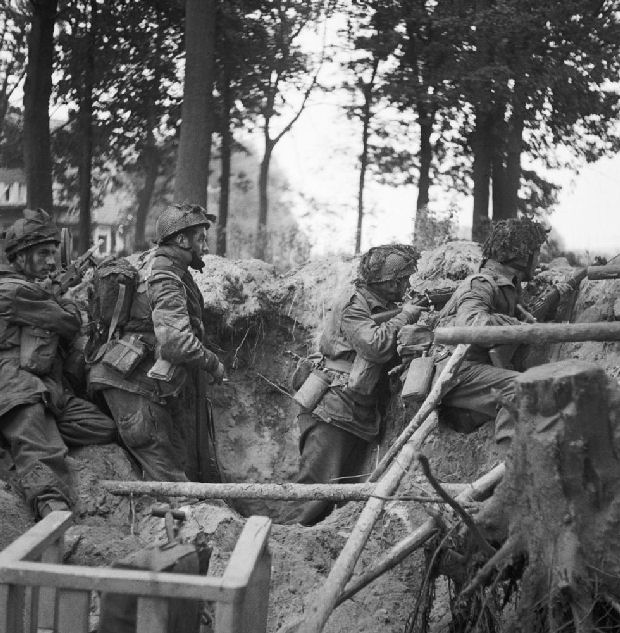 Using Steve’s own words to describe the scene: " The first release is RM1601 which is taken from a photo taken 17 September 1944 during Operation Market Garden at Wolfheze Village. It shows a Bren gun section of R Company 1 Para taking cover in a Bomb crater during their advance along Amsterdamseweg (Leopard Route)."

“Corporal Alfred Reynolds, second from left, who commanded the Bren gun section was seriously wounded a few hours after the photo was taken, he fell into German hands a died from his injuries a day or two later.”

The fate of the other three is unknown.

More historical data on this scene and the unit involved was posted on Planetfigure.com by Martin Rohmann, a “fixture” over at Planet Figure, known for his incredible ability to dig up historical information on battles and campaigns. Martin has found a Grave Registration Report Form and a photo of Corporal Reynolds’ grave marker. 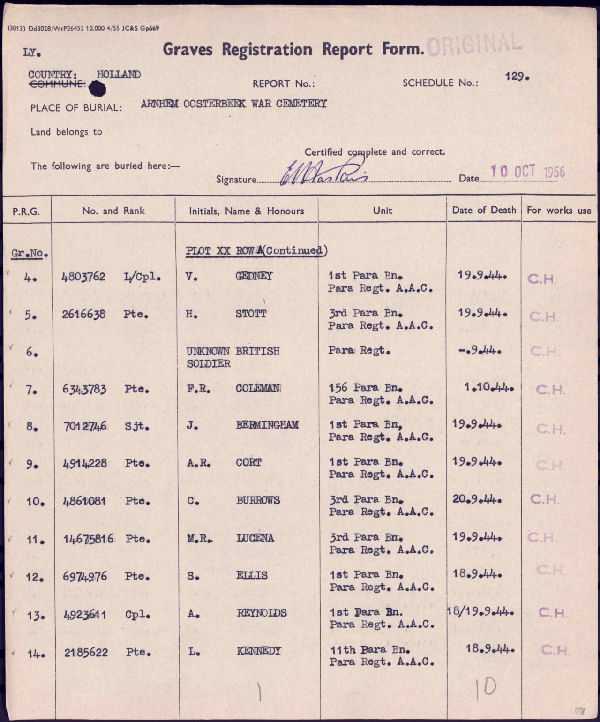 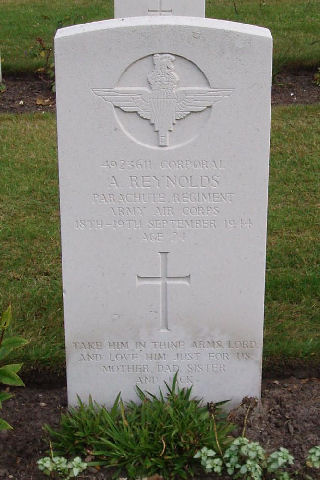 Personally, I think Steve did an incredible job honoring the memory of these Chaps and the unit involved with this vignette. Now I will attempt to do the same with this SBS and get to “sniffin paint and gluin my fingers together” in the process. This is my first go at British uniforms or camo patterns, so I’ll be going through the learning curve as we go along. Buckle up, here we go…

What’s in the kit?

Here’s what comes in the kit, four superbly sculpted figures in gray resin, and an excellent rendition of the crater seen in the historical photograph.

What I noticed right off was the clean mold work and the sparse amount of seams that requiring filing. These figures were molded with care and it shows. There’s even “locking lugs/ keyways” on all the arms and torsos, as well as a lot of the equipment, which makes for some real easy assembly. Another note of importance is where the arms meet the torso, the uniform folds actually overlap areas of the torso. There really isn’t much putty work to do when you have resin that locks together so cleanly. Pretty impressive. 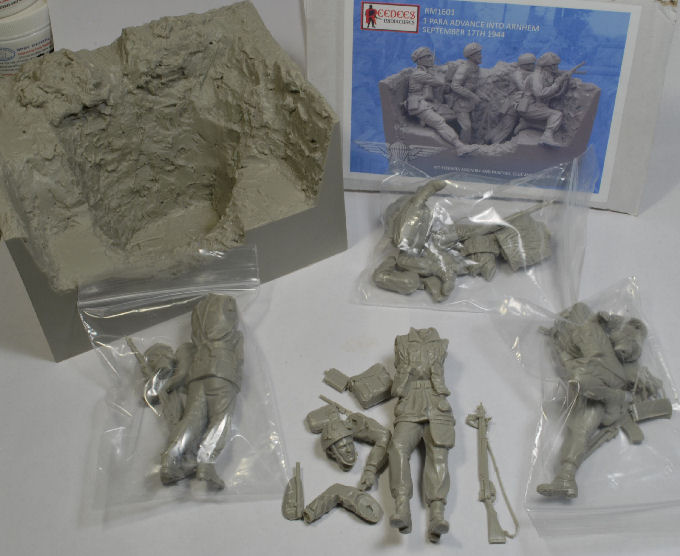 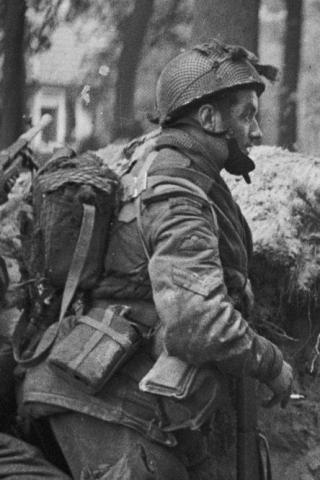 Here we have the “Corporal Reynolds” figure completed. There wasn’t much clean up to be had, really. There will always be some kind of mold lines visible in some locations, but very minor in this case. About the only real clean up for me was scrutinizing every little nook and cranny for any left over resin bits from the molding process. I used a dull dental pick to get any tiny bits that were found, but it wasn’t much.

The rifle mold was incredibly clean as well, but you still need to be super careful around the rifle strap so you don’t end up breaking it. It’s a delicate area and I did have a small amount of slag to remove, but mostly it was just little “feathers” of resin reside. I did bore out each and every rifle muzzle like I always do. Take your time when doing this, it’s a delicate area as well.

I added a strap for the Corporal’s back pack as seen in the historical photo. I used a strip of pewter for this because it’s just much easier to mold and shape than other materials. I dug out a bit of the resin on the pack for the strap ends and super glued them in place. Once the glue was set I formed the strap to a more natural appearance. I’ll be readjusting that strap after the paint process, but for now, it’s good to go. 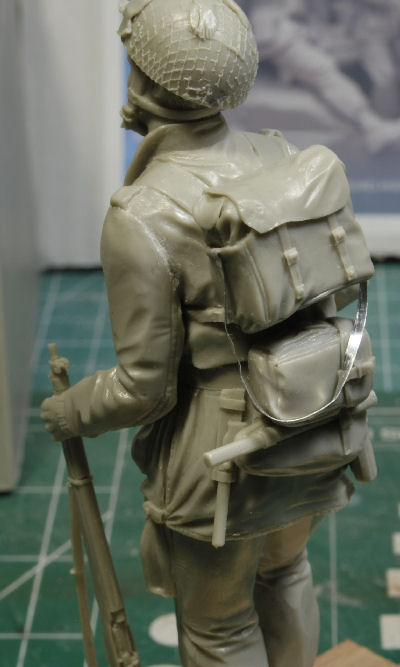 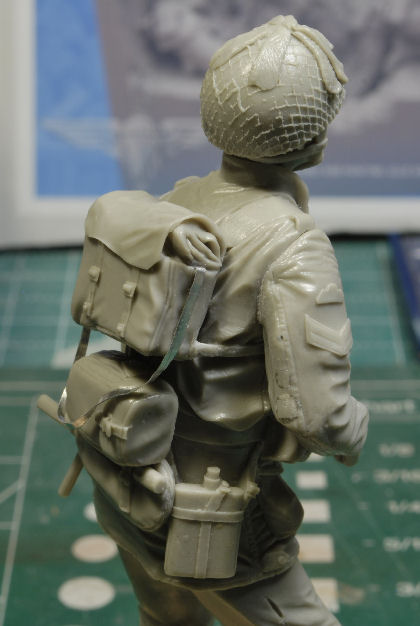 And lastly, each figure will be mounted on scrap plywood for ease of handling during the painting process. I always drill deep into the boots and install a sewing pin which will remain for final mounting into the crater when we’re all done. Corporal Reynolds is now ready for primer and paint.

One last note for all the figures in this vignette. I used Elmer’s wood glue to attach the heads for easy removal after the initial priming. I always like to paint the heads separate from the figures and a lot of times any flesh areas as well, if they can be kept separate without much difficulty. Nothing worse than trying to twist a brush into a tight spot, right?

More to follow me pronto and thanks for watchin. Cheers, Ski.

Nothing worse than trying to twist a brush into a tight spot, right?

I keep running into that problem with the smaller scales. Haven’t tried larger scales yet.

Ah,…give er a go Tank, you’ll be pleasantly surprised at the results!

I’m having a hard time just thinking about doing a 1/35th dio, yikes. It’s been so long, lol

It’s more of price point to completion ratio then a scale issue to me. Too slow a builder/painter to invest that kind of money.

Look forward to seeing what you do with the kit.

Understood and appreciated. Storage space for displaying these sets can get dicey at times. Thanks for watchin.

Thank you for the quick review of the kit.

I like the vignette and I’m sure you will do it justice. I’ll have to find a way to follow the topic on the new forums.

I’ll have to find a way to follow the topic on the new forums.

Mario under the reply there is a topic tracker. There is a watching or tracking options that can be used.

Jocko Willink does an excellent podcast regarding 1 Para at Arnhem, which is taken from “men at Arnhem” by Geoffrey Powell.

Thanks Gents, I greatly appreciate the kind words.

Klaus, thanks for that link, I’ll be checking this out, for sure.

@PolishBrigade12 jocko is an ex navy seal, so he puts his heart and soul into the sections of the book he reads.

Oh Boy!!! I’ll be buying to book. It’s a bit rough for me to listen to someone else reading, if ya know what I mean. But, the beauty is, the book is available on “A” website.

Thanks for the intel on this Klaus.

As mentioned in the intro, we don’t know the names of the remaining paratroopers, so we’ll number them as we go along. 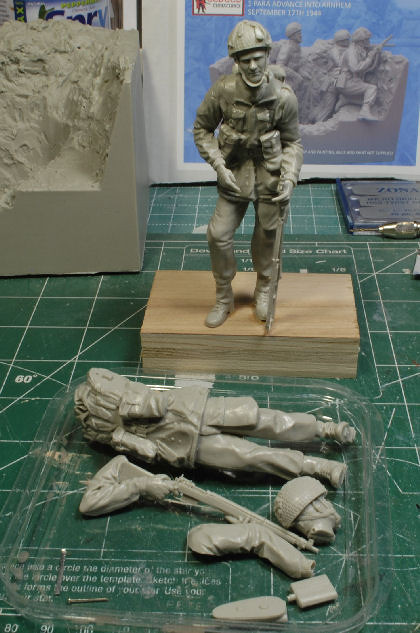 Figure two was a straight forward build with minor clean-up. I like to keep the parts in this plastic tub lid so I don’t have them flying all over the bench when I’m working. I really am tired of the carpet monster eating my resin parts, so this lid works wonders, lol.

Once the figure was cleaned and assembled I mounted him on the plywood. He is now ready for priming and painting. 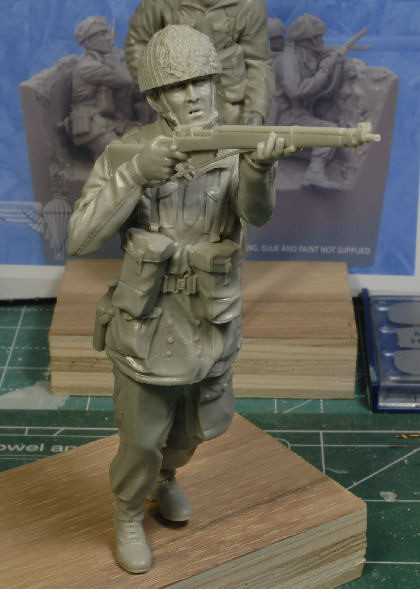 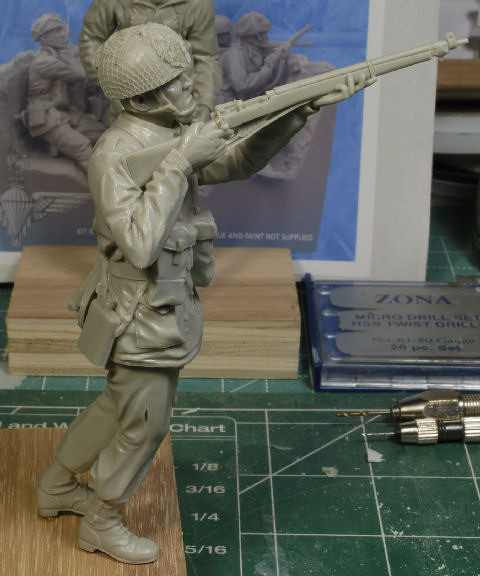 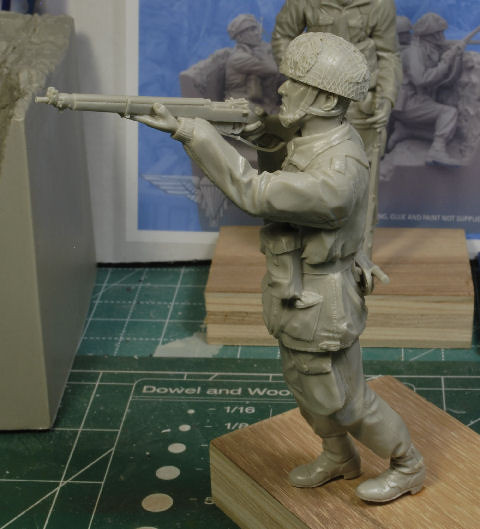 More to follow and thanks for watchin. Cheers, Ski.

Yep I think when I grow up I might veer off into this scale, looking great Ski!

Coming along nicely Ski! Looking forward to seeing how you paint these fellows, figures are my weak point.

Tim, once you start above 1/35th and get into 1/16th or 200mm ya just might not want to go back to squinting or straining your eyes, lol. Na, this is a fun scale to work with Bro, you should give it a go. You actually will learn fast, because your mistakes will blast you in the face and you’ll correct them mue pronto.

Thanks you Colin. Remember, painting figures is only a matter of continuous practice, nothing more. The fun part is, you learn from each one and before you know it, you’re running instead of walking.

Thanks for watchin Gents, Ski.

man you’re really ploughing through the assembly stage so I’m guessing that there aren’t to many fit issues either.

You’re right Klaus, the fit is incredible on these figures, impressive actually. Third fig will be posted mue pronto, Bren gunner up next!

Howdy Klaus. The painting will begin shortly, got a full range of acrylics on order. I hope the get here in a reasonable amount of time.