AK Interactive's Weathering Pencils--Buy or Not to Buy?

I think the base color for my 3D Sci-Fi printed figure is too dark. I should try the AK pencils on something of a lighter shade so that they will show up better so I’m not ruling out the pencils.

Besides, I just have two free samples so as others have posted here, I should buy a small set online and test them before committing to purchasing the entire set.

Thanks for all the advice modelers above.

To follow up on this thread, I purchased a few sets of AK Weathering Pencils, not the full set, and they’re pretty useful when they leave marks.

It is true that some of the pencils will not mark or leave any color on the paint, and that I find disappointing. The contrast with the pencils to the paint can be very subtle, but when it does work, the pencils do a great job of almost lightly drybrushing a figure.

Are the pencils necessary? Not really…detail painting can substitute for these pencils.

I wouldn’t say that the pencils are a gimmick, but they’re not really needed either and perhaps best used for AFV modeling with the dull AFV colors. On figures with gloss, semi-gloss or satin paint finishes, the pencils barely leave a mark trace of color. One really needs the flat matt coat colors of AFV modeling for the pencils to work.

I’ve purchased a number of these, and frankly, they are a waste of money. These pencils do not create any effects that can’t be done equally as well, if not better, using alternate, previously tried and true methods such as paint and pigments. I got the pencils mostly in the aluminum color ranges to use on airplane propellers, and I use them since i already spent the money, but I would not spend a dime on these in the future.

In addition, as others have written, oftentimes they do not even make the markings that they are supposed to. Highly limited value, in my opinion.

I dont get it , all vids ive seen the modeller then uses a brush plus thinners or water to blend them in …which is what you do with oils , and to some extent , pigments .

I bought into the pencil hype and purchased the big set. They looked fantastic on YouTube after all. I pull the pencils out from time to time but never can seem to get them to work… not at my bench anyway. A waste of money IMHO.

The pencils (or at least certain ones) work best with a flat matt paint surface.

I used the Gray Concrete pencil on the vertical Z-beam as a “drybrush method.” The lighter gray color is from the AK pencil. 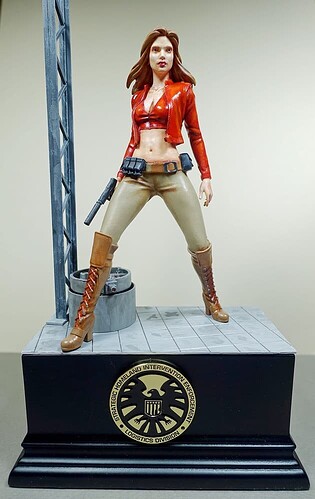 Other absolutely do not mark at all, such as it might be impossible to use an AK pencil on the gloss red “leather jacket” because it’s too slick.

The pencils (or at least certain ones) work best with a flat matt paint surface.

Yup, tried that too. I sat through the YouTube video’s too many times to justify wasting any more time.

Add me as the third. The other Matt and I have a support group that meets the second Tuesday each week. It’s about a helpful as the pencils but at least it’s free.

AKAKANONYMOUS? Do they serve free doughnuts?

Yep! They get them from the overeaters anonymous group in the next room.