Let the nations rejoice and the people be glad! A whole lot of you have been asking for pre-registration for Armorcon. And that day is now! Follow the link below and it will take you to the pre-registration page:

AMPS is all about armor modeling and the preservation of armor and mechanized heritage.

To be clear, while you can pre-register, you’ll have to pay at the door. BUT, all you paperwork will be filled out (no spending 10 minutes filling it out on show day) and it will be very legible for our data entry personnel! It’s a win-win in anyone’s book! Just be aware that pre-registration ends on Tuesday 28 SEP 21, so don’t delay! Also, you do not need to be an AMPS member to use the pre-registration (although it would be great if you did join the organization), just leave the field blank.

And just to beat this dead horse some more, sign-ups for ram-rodding, running (sorry, I forgot to add that role the first time, it has now been updated), data entry and judging can be found at the sing-up genius link here: 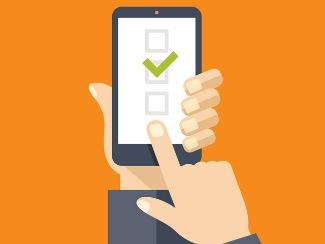 Thanks again and we’re really looking forward to seeing everyone in October!

Hope you all have a great show 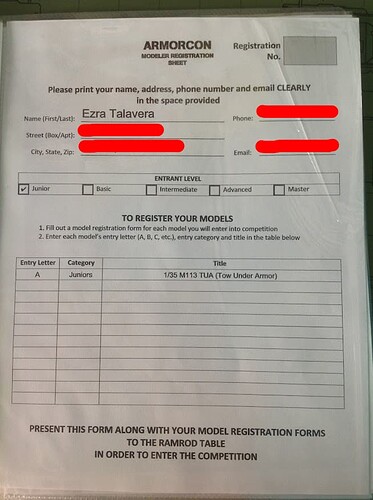 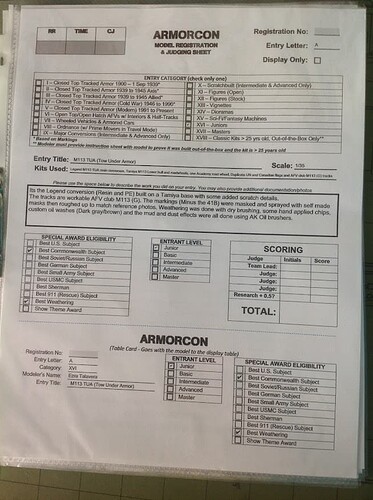 Ezra @Panzer_modeler , be careful of posting your address on an open forum mate

Ezra,
I would request that you use the link I have above to register online (it will make life a whole lot easier for everyone). That way, you’re already in our system and it will save our staff time getting all your paperwork entered. And Johnny is right, don’t post you address on an open forum like this.
Regards,
Georg

Ezra, be careful of posting your address on an open forum mate

Got ya! I will do that right way.

Any chance you AMPS guys might have a show west of the Mississippi ? Me being on the left coast your shows are always too far away

Me too! The AMPS shows really leave out a big chunk of the country.

There is 4 clubs on the left coast and a few more west of the Mississippi. It would be up to the clubs to have a contest. You can see who is the closest and asked about any contest plans. Regions and Chapters - Armor Modeling & Preservation Society

Some folks have a joint IPMS/AMPS contest. The armor is judged by AMPS rules and IPMS rules for the rest. For local IPMS clubs IPMS/USA Region Map | IPMS/USA Calendar

There’s a great chance of it happening if YOU put in the work. Armorcon started in 2000 and was the brainchild of a couple of the local clubs in the NJ/NY/CT area. We pulled together and made it happen. If you want a show in your area, form an AMPS chapter and get to it. It’s not particularly difficult, but it does require work (a good deal of it).
Regards,
Georg

Not to rain on anyone’s parade but the big factor in no AMPS shows west of the Mississippi is that the bulk of AMPS membership is on the east coast meaning that its hard to get the numbers to justify a show. While this might not be as big a factor for a local show it’s certainly a big consideration when it comes to hosting the Nationals. Anyway like Georg said it can be done but it does take considerable effort. Good luck.

I was just asking because the IPMS Nats makes it out this way on occasion. If all the AMPS members are on the east coast then it makes sense to have the contest there.

Actually, what I have seen is that there is a “sweet spot” triangulated between Chicago, New York and Washington DC. That’s an area where most members will drive to and it has a very large concentration of one important thing for a model show: a population with sizable disposable income to not only travel, but also to spend at the vendors. I’ve been going to the AMPS International since 1999 and I can tell you from experience that international shows outside that area don’t do as well as those inside it. Hope that helps to clarify the situation.
Regards,
Georg

IPMS also has a rule or guideline to move the Nationals every year but that requires chapters to submit a winning bid. From what I have seen the single biggest cost is the venue, no matter if it’s a local one day or multiple day National/International affair. It takes time to build a “war chest” and you must have good core group of about 3-5 people who aren’t afraid of work and hopefully drama free as feelings can get hurt when tough decisions need to be made. I have PowerPoint for a contest we did in 2008 that lays it all out and helped us over the 12 yrs running contests granted its more IPMS but it can used to run an AMPS show with some changes if your interested in doing a contest.

I just had such a good time at the recent Vegas/IPMS show that I wish there were more “mega” shows nearby. We have several regional shows and swap meets here in SoCal so I’m not deprived but they can’t compare to a national show. I’ve done IPMS Vegas, Phoenix (twice) L.A. and I’ll probably due Texas but a pure international armor show would be great.

Thought of flying but how do you get the ton of stuff you buy at the show back. After Vegas the whole back seat of my Mustang was filled with kits, books etc.

UPS with a few guys and split the shipping. Or, if someone drives send it back with them.

Or fly out with a small suitcase inside of an otherwise empty big suitcase. Bring the big one back full of bootie.

I will probably attend that one being only 3 hrs away. The last when I went too was at the same area.