The Austin armoured car 3rd series was the result of the experience gained from the previous models in the battlefields of Europe during World War 1. The 3rd series of vehicles used a 1.5 ton chassis as opposed to the previous chassis used on the 1st series of vehicles. The armour was thicker and better suited to protecting its occupants. The improvements here that specifically identify this offering as a series 3vehicle is that armoured plates replaced the side windows and a second driving point was added at the rear of the vehicle; something the Germans used in a number of their vehicles during World War 2. The vehicles in this release would seem to replicate vehicles either captured from the Russian forces or their allies who were given them. This line of models from MiniArt all seem to have fairly complete interiors and so let’s take a closer look.

This is partial text from the full article (usually with photos) at https://armorama.com/news/austin-armoured-car-3rd-series-ukrainian-polish-georgian-and-romanian-service
2 Likes
staff_Jim January 26, 2021, 5:55pm #2 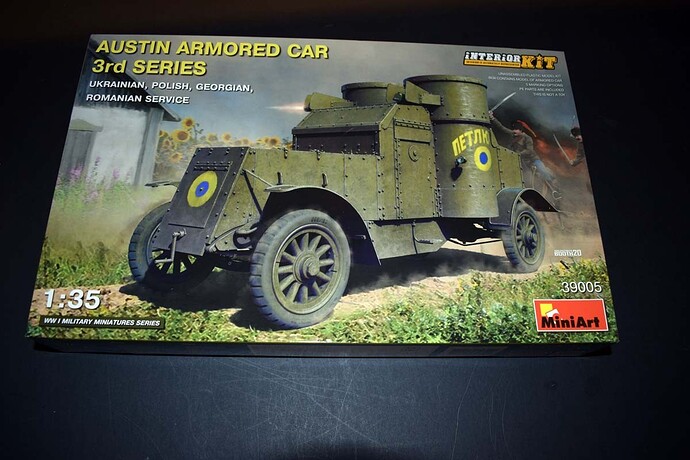 Darren, Very nice review of this kit. I’m building this one for the Armorama’s Minart Campaign. Thanks much for a great review.

Thank you Darren for the excellent review. This does indeed sound like a very comprehensive kit. I tried to order one from SprueBrothers but they ran out the day I went there. I intend to build the car in Polish service for the Miniart Campaign. I am now on the waiting list for when they come back in stock, I hope it’s soon. I’m looking forward to starting this kit!

I’m also still waiting on one, the 1918 Western Front version, on backorder from Michigan Toy Soldier. It’s been well over a month since I ordered it (before the New Year).