A new figure from The Bodi depicts Aussie infantry from WW2. 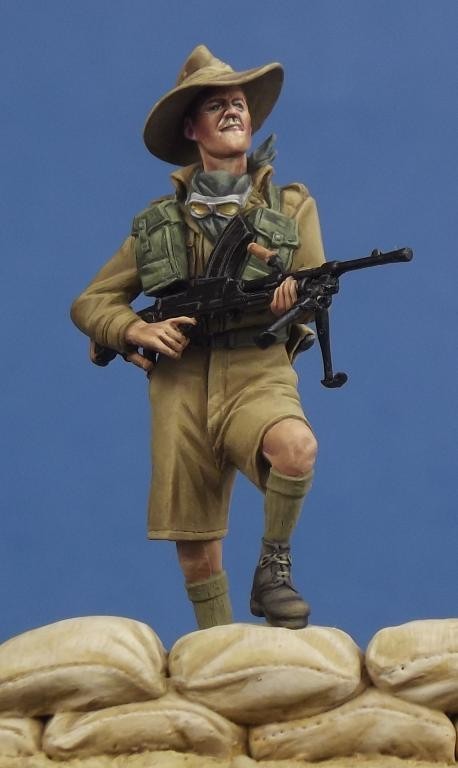 This is partial text from the full article (usually with photos) at https://armorama.com/news/australian-infantryman-2-ww-ii-tobruk-1941
bigsplashbear October 18, 2022, 11:25pm #2

Well this is better than the first attempt.
The slouch hat now has the correct bash and pugaree. However, Aussie infantry troops usually wore helmets into battle in North Africa. See photo from Australia War Memorial NX15705 CORPORAL JOHN EDMONDSON, (IN FRONT) FOLLOWED BY J. DEERING AND DOUG FOSTER OF THE 2/17TH ... | Australian War Memorial

Not sure why the sculptor has included a short machete. That would have had use in the New Guinea and Pacific campaign, rather than North Africa. 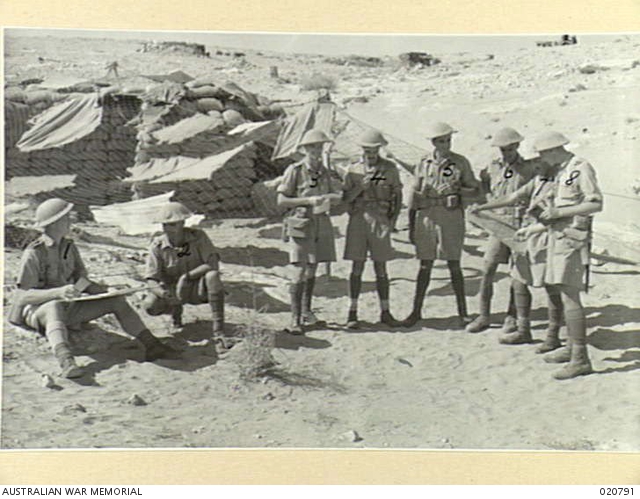 The Commanding Officer and Company Commanders of the 2/17th Infantry...

Well, I’m sure I’m in danger of sounding like a broken record here, but I’m really not happy about this; there was a method of carrying Bren gun magazines in special pouches on a yoke - as depicted - but I’m pretty sure there was a connecting/securing strap as well. This is not shown. It really has to be, as one cannot charge into action with 2 x unsecured pouches with what? 4 x fully loaded magazines thrashing around one’s neck? I haven’t access to my assorted sources on British webbing right now but I’m sure this is wrong.

Now, talking of charging into action; well, if one was a large, strong, burly chap – such as indeed some Aussies are – then fine, for about a hundred yards. Without the use of a sling for his Bren he’d falter pretty soon, no matter how motivated he might be. The Bren is a ferociously heavy beast – I know – I’ve carried one (or at least its L4 7.62mm version), and whilst I fully admit to being small and weedy, believe me, it’s a deadly burden. So, the sling is absent and really shouldn’t be.

I am not convinced at the angle of the pistol holster affixed to the belt. Talking of the belt, there are no back brasses (as we used to call them) ie no buckles on tabs – designed to take the cross straps.

The shorts, assuming they are meant to be the issue Khaki Drill (KD) shorts, would normally have a field dressing pocket over the right thigh. The top garment, if it’s not a KD shirt, and is meant to be a Battledress blouse - which is perfectly feasible - really has the seam on the back over emphasised, although that might be the painted finish.

I note that the boots and stockings – which are normally really “hose tops” over socks, are lacking puttees; now, it may well be that in the heat of combat this particular soldier has deigned not to abide by dress regulations, which is fair enough – given a certain – how shall I put it? An Aussie predilection for doing their own thing(!), but the method of tying his laces is also suspect. The normal way was to wind the bootlace around the top of the boot and then to tuck it in, several times underneath the wound portion. No big floppy bows as shown. The reason? Big floppy bows catch on just about anything at boot level and will snag, or become undone. Hence also, the requirement for puttees and hose tops.

Boots of the period did not, I am fairly sure, have loops affixed to the rear; that said I appreciate that Commonwealth manufacturers may have produced to a slightly differing criterion. Also, I am equally sure that the toecap would be a defined section.

I agree with the earlier poster that the knife/machete is unlikely in the Western Desert.

I have to say, after so much damning, that I like the pose, and especially the expression of grim determination coupled with a hint of battlefield triumphalism on the face. In a later period, I’m sure this would be portrayed as “Get some!”

But really, come on Bodi, there’s more than enough reference material out there; I’m sure you can do better.

Brian- I think this might be strap you are talking about- fastened behind the pouches when they were worn around the neck. 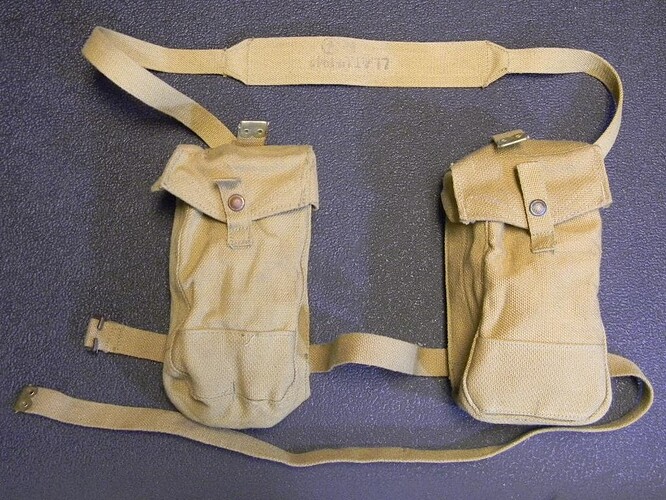 Yup - that’ll be the badger!

This is what I mean though - all this stuff is out there - it’s readily available enough on the www, let alone the more specialist publications, and they’re not that hard to find. Admittedly, to the uninitiated, ’37 pat webbing is a bit of a ‘mare, and perhaps it’s only because I’ve worn and used it that I get so vexed, but c’mon!

I don’t think it is grumpiness, it is just that with just a wee bit of research the company could have got it right… On the other hand, there are so many modelers out there not interested in accuracy, the artistic impression is all that matters.

Hmm, great subject, really weird sculpting, I am sorry to say. The feet and legs below the knee are seriously undersized/out of proportion to the rest of the bodi.

I agree with you here Brian- plenty of sources for webbing and infantry equipment be it British or Russian or American.

I do get what @Maki is saying though too, not everyone wants to delve deep into the subject- just to get some paint on it. I rather enjoy both the painting and researching things like web gear.

I do too - re Maki - but I probably am getting grumpy a tad! And of course, just because I’ve been in the military and think I know stuff, it doesn’t follow that everyone else has (obviously!) I mean, there I am criticizing bootlaces for Pete’s sake, how would one know this unless you’d sort of been there. Perhaps I need to be a bit more merciful. Perhaps.

You are right to point out stuff thats not correct. Its up to modelers to decide how accurate they want their models to be. I would even point out the green blanco on the equipment. More than questionable for a Tobruk setting. The holster is at a wrong angle. I know because I have carried it.