That’s awfully nice of you! If you actually get your book back… maybe just scan it and post the info here for everyone to use? It seems to be available on Amazon in different forms and used on eBay. I still have a bit of birthday money on hand.
My main concern was procuring existing or frankensteining appropriate figures. Just like the monkey and doberman pincer I would like to feature in the dio. Maybe this will serve a lesson to all…
Having an idea and actually building that idea are two very different things.

Doesn’t Hornet do heads in Aussie Bush hats? Or perhaps Ultracast, Warriors, or somebody else makes the hats separately. Anyways, you could use them with some of these figures 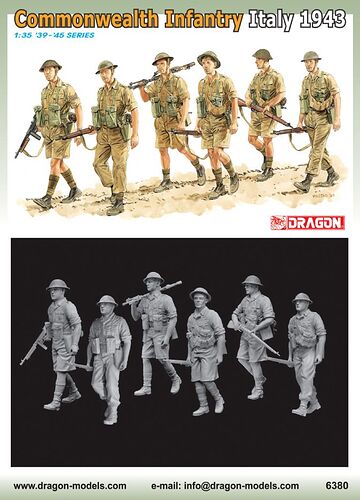 I would love to see some 1/35 far-east ANZAC troops in styrene. Oh, and Chindits too.

What about AC Models? His sets are expensive and usually sells them in large groups but I seem to remember him making a set of ANZAC figs

Chaps, as promised/threatened, here is the extract from the book “Quartered Safe Out Here” - which I would thoroughly recommend to just about everyone; even if you’re not interested in the Burma campaign, the author writes from very real experience and his description of combat and the campaign are, in my opinion, rivetting.

Anyway, I had to cut it down a bit as he waxes lyrical over some items of kit such as his beloved rifle, however, I hope, although a bit long , that it is of some interest:

" The uniform was dark green; even underpants, vests, and socks had gone into the big dye vat at Ranchi; watch straps had to be green or khaki. You had two shirts, two pairs of trousers, puttees (a better protection than anklets against leeches and other crawlies), and boots – British made if you were lucky, rather than the clumsier Indian pattern; late we sometimes wore Jap jungle boots, with their thick crepe soles. A few – Parker, for one – dispensed with socks and filled their boots with tallow, claiming that it prevented blisters. It was also messy, and it stank. I tried it – once.

Fourteenth Army’s distinguishing feature was the bush-hat, that magnificent Australian headgear with the rakish broad brim which shielded against rain and sun and was ideal for scooping water out of wells. In some ways it was a freak, in the steel-helmeted twentieth century, and it may have cost some lives under shell fire, but we wouldn’t have swapped it. It looked good, it felt good; if you’d been able to boil water in it you wouldn’t have needed a hotel. Everyone carried a razor-blade tucked into the band, in case you were captured, in which case you might, presumably, cut your bonds, or decapitate your jailer by stages, or if the worst came to the worst and you were interrogated by Marshal Tojo in person, present a smart and soldierly appearance.

Equipment consisted of the standard web belt; cross-braces; pouches worn brassiere fashion; small pack containing tow mess tins, pialla (enamelled mug), knife, fork, and spoon, housewife with needle and thread, water purification pills, mepacrine (to ward off malaria, which it didn’t), and any personal effects you felt like carrying, plus your rations; a pint water-bottle; entrenching tool, a steel mattock head with a detachable handle; and a log-line, a five-yard coil of thin rope. The last three items hung from the belt behind. A small trouser pocket contained a field dressing, but everyone scrounged a spare one because the gauze made a splendid sweat-rag-cum-neckerchief.

Weaponry was equally simple. There were a few tommy guns (but none of the hated Stens, the plumber’s nightmare) in the company, but the standard arm was the most beautiful firearm ever invented, the famous short See-Enfield, either of the old pattern with the flat backsight and long sword bayonet, of the Mark IV with the pig-sticker, a nine -inch spike with no cutting edge.

We carried fifty round apiece, in a canvas bandolier draped over the buttocks.

Apart from the bayonet, the other essential sidearm was the kukri, the curved short sword of the Gurkha, slung behind the right hip. Mine cost me ten rupees, and some swine pinched it near Rangoon. The alternative was the dah, a long broad-bladed machete.

In one pouch you carried two armed 36 grenades (Mills bombs); there was another type of grenade, the plastic 77, which was a smoke bomb. It also sprayed phosphorus about and was used in clearing bunkers. In the other pouch were two Bren gun magazines, holding between 25 and 30 rounds, for the section’s light machine gun; rifle and Bren ammunition being identical.

Any other weapons were a matter of personal choice. Most of the section carried long-bladed flick-knives, bought in Indian bazaars. The only other personal items were the rubberised ground-sheet, folded inside the top of the small pack, behind the right shoulder, a blanket, a canvas water chaggle.

We were not bearded; that was a Chindit fashion.

So there we were, nine or ten men with a thousand rounds of .303 and twenty grenades among us, and if my list has been a long one, it still describes one of the most lightly armed and least encumbered foot soldiers since the introduction of firearms in war. It was gear designed for fast, easy movement by the lightest of light infantry – and I wonder why it has gone out of fashion."

Awfully nice of you. Thanks!

a log-line, a five-yard coil of thin rope

Is this the equivalent of a toggle rope? Six feet of rope, one end with a loop, the other end with a wooden toggle, so multiple sets can be joined together, or a single one can be formed into a belt, short loop etc

I don’t think so; not least due to the disparity in length. A toggle-rope is also quite chunky so I don’t think 15 feet of it would fit anywhere handy and certainly not in the small pack. I envisage it as being akin to washing-line thickness or perhaps a little chunkier but not approaching toggle-rope dimensions. Perhaps just carrying cord proved its use in the field so they carried them, viz assisting in the construction of a bivouac (with the groundsheet), helping the non-swimmers when transiting a river, securing bundles of firewood when allowed to light fires, or used as alert cords (by pulling) when on night sentry-duty.

Of course the original log lines were something to do with measuring speed on a ship (I think) and were knotted about their length which I also understand gave rise to the term knots for nautical speed but I might just be woffling here - my memory isn’t all it should be these days.

Thinking about, a 15’ line of toggle-rope dimensions probabaly would be perfectly portable so perhaps that is indeed what it was. 'More than happy to learn if anyone else has ideas.

Hi Brian
Those latter uses would probably be covered by 550 Paracord.
The toggle rope is tied/woven into something that looks a bit like a hangmans noose & typically hangs off your webbing, rather than stowed. Ends up only about a foot & half long or so. 15 ft would involve more folds.

re your Knots explanation, fathoms is similar, but downward. I won’t mention links & chains, though 7.92 figures in those too.

Mal, I do indeed happen to know what the toggle rope is - we used them to carry a bloody great log we had to carry during a punishing log-race way back when. Something I’ll never forget - probably the most physcially demanding thing I’ve ever done in the Army.

I just doubt that these were what the author meant by “log-lines”; I vaguely recall he mentions use of them again in the book but I’m not sure if I’m ready to plough through it all again, excellent read though it is.

Hi Brian
Figured you would be familiar, the explanation was for those unfamiliar.
Back in the 90’s while I was Airsofting, I made a bunch (6) of toggle rope sets as part of ones kit.
Wore one while attending a ‘buddy’ weekend with a local unit & got asked what the wooden thing was - at that time the toggle wasn’t being issued with the ‘toggle’ rope.

Mal - sure - the more information exchanged on this site the better!

Agreed. Off to work now