I am planning on doing both Chieftain Mk.10 and FV432 from Takom in urban camouflage. Where the colours in the 1980´s standardized, e.g. RAL or BS? I have he colour set by Ammo of MIG but am not satisfied. In Tankograd British Special 9001, the brown looks more like Olive Dab or RAL Gelboliv. Where the colours purchased through the military or from local sources?

Way back when I did mine while actually stationed in Berlin, I used three different rattle cans of primer - white, grey, and red brown. They were perfect. I don’t recall the brand name, but I’ll bet you could find them.

Hi HH, The colour tones changed about 1986 and for the Stillbrews, the grey went a bit more blue tinged grey opposed to the earlier light grey tone, and the brown was more red brown opposed to the more earlier earthy brown. If you have the tankograd book you can see it better there on the Stillbrew around i think pages 20 to 26, page 25, callsign 13 shows it well. Andreas @AKirchhoff is the guy to ask as he is pretty much a font of all knowledge regarding Berlin brigade and may be able to help more as he did the book.

I basically eye balled the colors from the tankograd book

I forgot to mention, HH- Thanks for properly calling it the Berlin Infantry Brigade. Over the past decades people have called it the Berlin Brigade. That term is reserved strictly for the US forces there.
Jedenfalls-
The top photo is one I took while stationed there. It was one of many, but the others have disappeared into different boxes or albums and may never be seen again. Although the grey is darker in the photo than it actually was, it is clearly darker than the photo taken at Bovington (?) I know the grey was never that light when I was there at least. I’m always suspect of museum colors anyway. 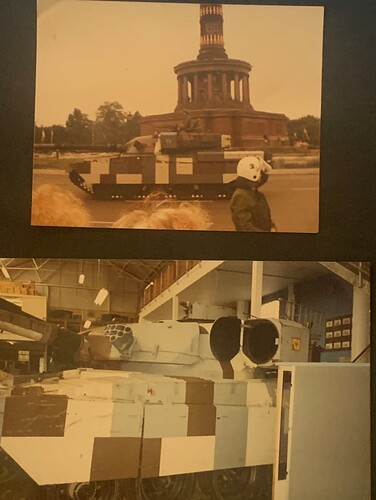 The cool thing about the scheme, whatever the shades of colors used, is that it really worked.
Even in my photo, which is not the best example, it really is disruptive.

Definitely don’t trust that Bovi pic with that grey, especially on a Stillbrew.
What year were you there Rob ? That will will give a better idea about the Mks out there then. They replaced the Mk9s about 88 with Stillbrew as the 14/20 trained up on our last Mk10s then took them as we got Chally 1s.
HH, if you check page 17 on the bottom image, that gives a good idea of the colour grey and how much lighter it is than the Stillbrew ones a bit further on over on page 25.

I took those photos around '85 or '86. I don’t think I had purchased my Minolta Maxxum prior to that. And yeah, it’s not a good photo considering the camera used, but I used to use a lot of asa 1000 film to get those good telephoto “spy” photos. Apparently that’s what was in it that day. Of note though is how the guide horns almost had a chrome appearance. I heard a guy get dinged at a contest for that once…

Found this video:
https://www.youtube.com/watch?v=JoLdXy29db0
of the Berlin Brigade on parade back in 1988.

The springboard hand salute by the guy in front of the band in the beginning is priceless. I haven’t seen one like that since my days as a Drill Sergeant.

I never actually had to march in one of those parades, but I remember the taps in the jump boots, the cardboard blousing hoops with pennies taped along the bottom, and depending on when you were there - the white bootlaces. I’ll bet those Ruscists didn’t want to tangle with the Berlin Brigade.

Wow that’s so funny about the uniform stuff Robert. When I went from Germany to Fort Benning in November 87, I met two guys who were previously stationed in Berlin and had those metal things on their jump boots. And my 1SGT in Germany, along with a few other guys had those cardboard hoops with the pennies as well. But they used them with highly starched BDUs. Always got a kick out of that!
Interesting how those 113s and M60A3s(or A1s?) are in the dark olive drab and the hummer’s are in a dark green as far as I can tell. Like the shields on the M113 TC position too.