Breakdown on the trail

I wanted to show a side of the war in S.E. Asia that gets kinda lost in the mix.
I started with the Buddha Temple Ruins from Danger Close Dioramics , and added the base and ground work to show the setting . The truck is a Trumpeter offering that kinda stalled in the build process a while back and now it just needs to be weathered to fit the scene.
At the same time I will tone and adjust the dirt road. 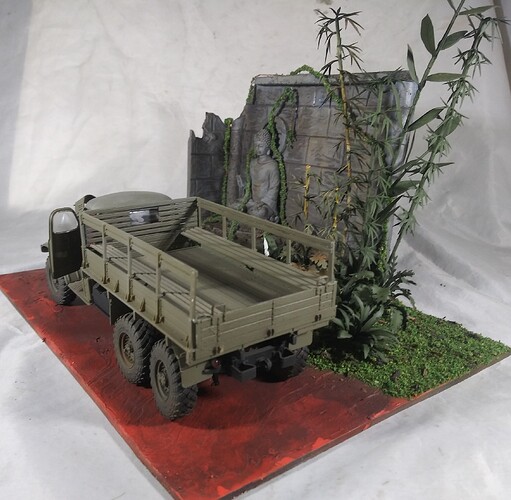 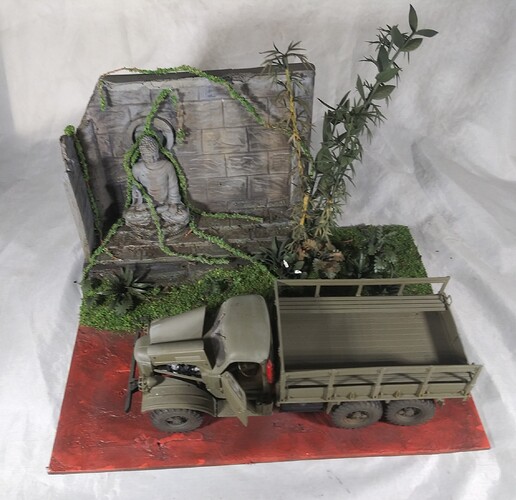 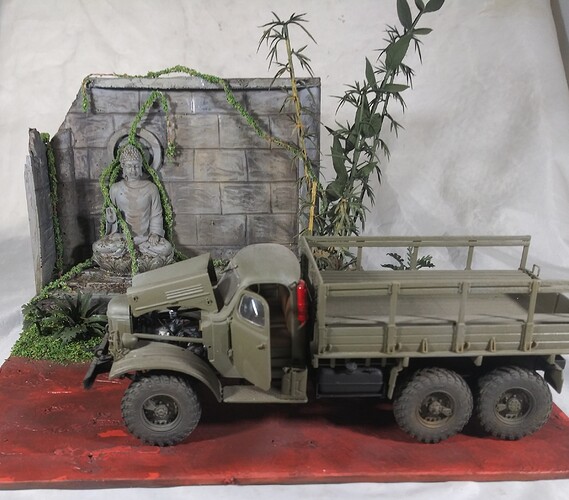 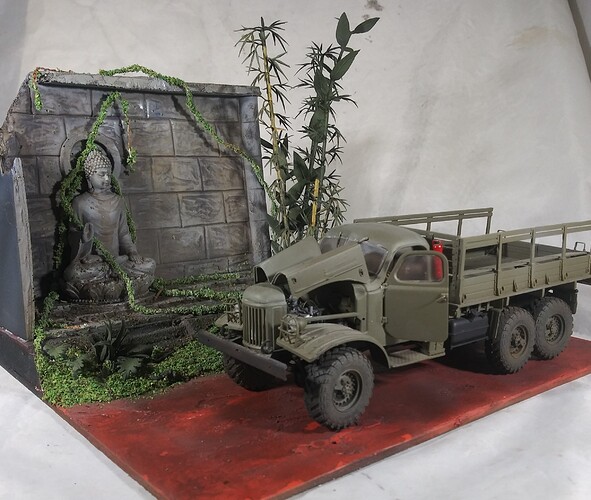 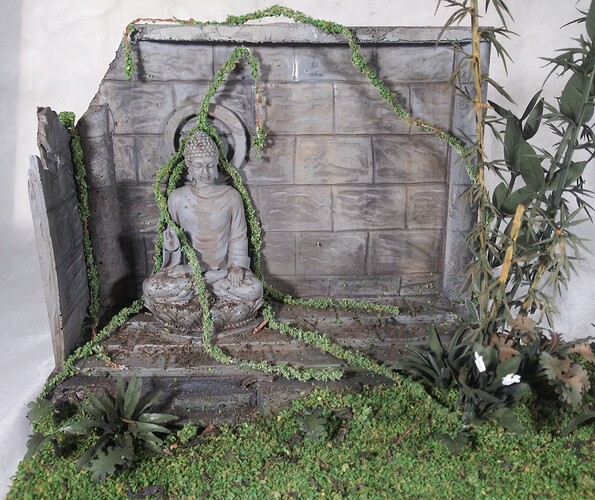 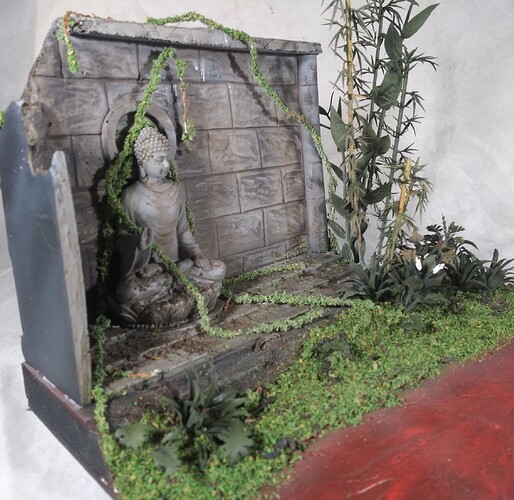 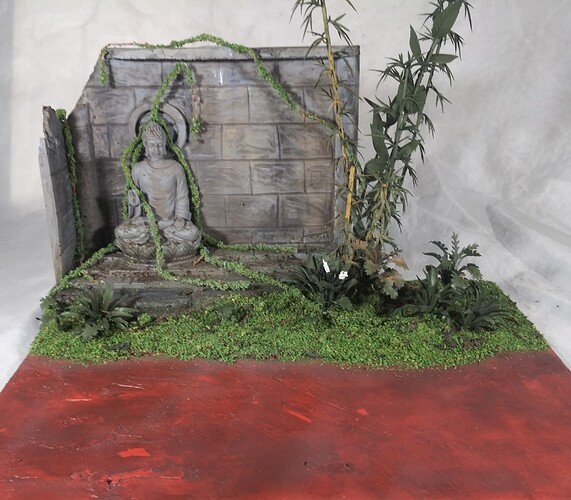 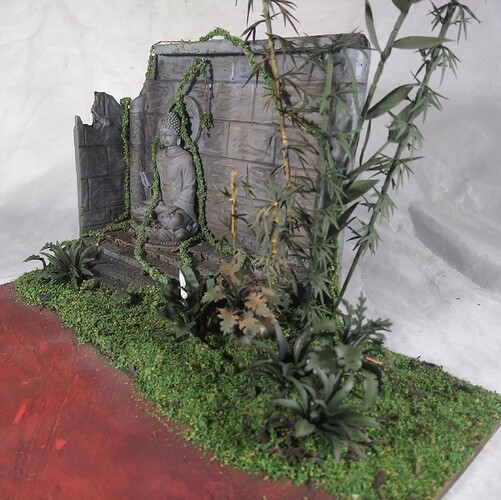 I think I know what the fault is.
The rear axle seems to be broken or the whole axle has come loose, the rearmost wheel is slightly turned inwards, as if trying to steer the truck into a left curve.

Good catch. I really need to get the truck sorted out .

Photos shows things one doesn’t see with the Mk I i-Ball.
Can’t explain why, maybe it tricks the brain into not thinking about a 3D-object so the brain can see the actual details. Some artists/designers turn their work/designs upside down when reviewing to prevent the brain from interpreting and actually see the details.

One of my very few pet peeves is misaligned wheels, road wheels on a tank that look like the teeth on a teenager before the braces, trucks cocking a leg like a dog doing his “business”.

Some ruts in the “road” surface and maybe flatten the tyre pattern slightly where the tyre meets the ground. Even an unloaded truck has enough weight to make a small flat spot on the tyre.

The very first NVA truck I ever saw was just like that, but with a canvas tarp in the rear. He was driving thru a series of switch backs coming down the south east side of a mountain pretty close to LZ Ross (less than a mile out). I was sleeping on a big chopper pad on Ross, and the place I chose to sleep was not good. Shortly after midnight I was blown to bits by two 175mm guns! I thought I was dead! Then about 5:30 in the morning I wake up to a bunch of 105’s firing at the truck. Those Marines must have fired fifty odd rounds of HE, and never once connected with the target. By now I can actually make out the driver’s face. I certainly imagine he filled his shorts several times on his road trip. Funny thing was that the truck was painted a greenish grey color. I sort of imagine he resigned his position after he got to where he was headed. Time frame was right at the first or second of May 1968 right at the mouth of the Que Son Valley.
gary

@Gary_Totty1 . That is a incredible account. Its amazing that they new made contact with the truck. Thank you for sharing your experience

That was the start of a major operation deep into the valley (was nic-named “Death Valley”). Nobody had every gone in there in force, and I went with two battalions of the 196th, a CAV troop and a 105 arty unit besides us. Nobody (including the Colonel) knew exactly where we were headed in there, but radio Hanoi told us right where we were going to the correct grid square on a new map that was not even issued yet. That map was delivered to us the next day. So much for leakage! I was just like everybody else and scared to death. The Colonel sent the XO to another battery to spend the night; while he and the Sargent Major spent the next two nights with us (we call that respect). The CAV troop did a 180 when we got there and went back east to the Hau Duc A.O. (not a very nice place to visit). The LZ was called O Conner, and somebody changed the name to Lurch a couple days later. (why?) Between to mortars and a few rockets we were shooting in three hours, and it became business as usual.
The Que Son Valley is often referred to as the place you go to meet your maker, and young kids become grown men. No fat boys out there as everything is a hump. I never dreamed I’d spend the next ten months out there, but I did. It was home

While out there we split up and went to an un-named mountain top (later known as Melon) to work with a MACV Heavy Team that was about fifty feet from Laos. A most interesting place to say the least. We lost that mountain top due to the lack of warm bodies. Close to 70% WIA and KIA. Got off that place with out a scratch, but maybe a half dozen rat bites. The 196th later took that place over after we all cleared out, and named it Melon. They never had a good time there either. As bad as it sounds the place was one of the most beautiful spots on the planet. There were tigers and a leopard every now and then. Funny thing about that place is that I can’t remember flying in to it. Randy Owen said I was the first boot to touch the ground, but you could prove it by me. A few CMH’s awarded out there, and silver stars were like something in the sundry pack.
gary