Following my earlier ‘Shadowing the Bear’ diorama,
here is another one, featuring HMS Revenge breaking
through the Arctic Ice.
Both this and the Soviet Victor III Class submarine are
included in Dragon’s 1/700-scale ‘Modern Sea Power’
kit (ref. 7007). 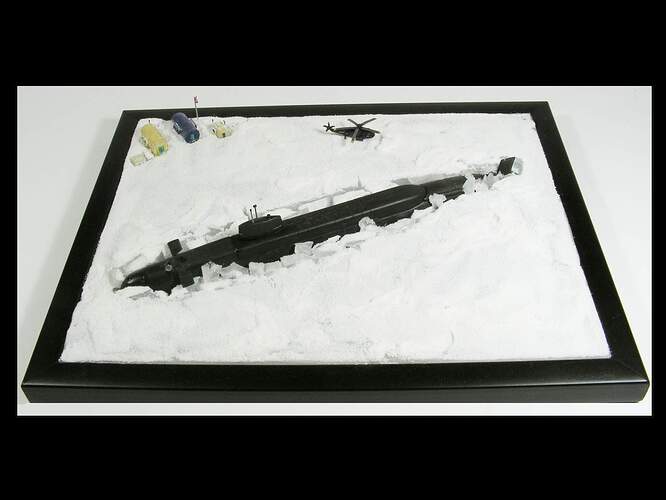 That’s a gem of a scene Paul! What did you make the huts and the flag out of?

…now why to I feel like it needs more zebras…

Thanks for the compliments.
The prefabricated buildings in the background (based on photos of an Arctic scientific research station) were made from sections of a felt-tip marker pen, with scratch-built details added for the windows and doors. The flag was simply a rectangle cut from a Rizla cigarette paper (perfect for this scale), with the design drawn on using red and blue ballpoint pens, and attached to a pole made from a cut-down sewing needle.

Yes, vaguely reminiscent of the film ‘Ice Station Zebra’, but much later.

How did you make the ice? It looks quite realistic.

Many thanks.
This is my method for recreating the Arctic ice:

I hope that helps.

Yes, Paul, that helps a lot. Thanks! Now I just need a submarine.

If you are looking for something in 1/700 scale, I can recommend the Dragon set, ‘Modern Sea Power’ (ref. 7007). As mentioned earlier, the set includes two submarines: HMS Revenge & Soviet Victor III Class (both with the option of full-hull or waterline); and two each of the Sea Sprite and Lynx helicopters. Actually, I used neither of these in this scene; the helicopter here is a Royal Navy Sea King.

Thanks. Yes, I’d be looking for something in 1/700 scale, but I’m not sure exactly what. Maybe a Los Angeles-class. Who knows. Wouldn’t want to replicate your scene exactly. 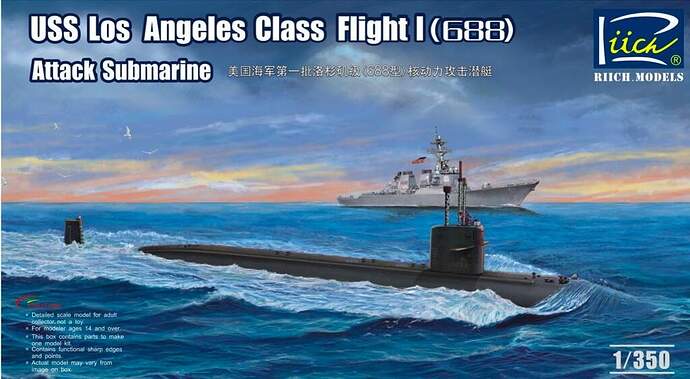 Many thanks … much appreciated!

Probably would not want to use an early 688 class for an artic ice scene. The sail planes don’t go vertical and they would bend or break off if they were forced through the ice. Pretty sure early 688’s didn’t/don’t go “under the ice”. Can’t tell you how I know this, cuz, you know….reasons. The later version (688i) has bow planes which would work. Definitely use something with bow planes

Thanks for that information. I guess that is knowledge from experience.

So, jimb, forget my idea of the Los Angeles sub.

I did spend quite a bit of my enlistment under water onboard USS Baton Rouge (SSN689) back in the eighties. We were quite shocked at many of the details narrated in”The Hunt for Red October” at the time. Wikipedia will tell you things I won’t. 637 class went up there and newer boats probably do.