Thanks. Should be quite easy to paint, red bottom and otherwise single color hull. I’ll double check that before painting, but that’s my understanding. Turret top is grille for ventilation, so turret interior needs to be painted.

I started ICM’s 1/350 Grosser Kurfurst a few years ago. Except for the water base, lower hull, and failed torpedo nets, I hadn’t completed anything else. Unhappy with my torpedo nets, the kit has languished on my shelf for quite some time. Yesterday I mounted all of the metal barrels and applied some very light gray paint as I want my build to reflect what we see in pictures of the period.

1665×677 204 KB
One of the most attractive aspects of WWI German Capital ships are the turrets of the main battery. I’ve replaced some plastic parts with metal rod. 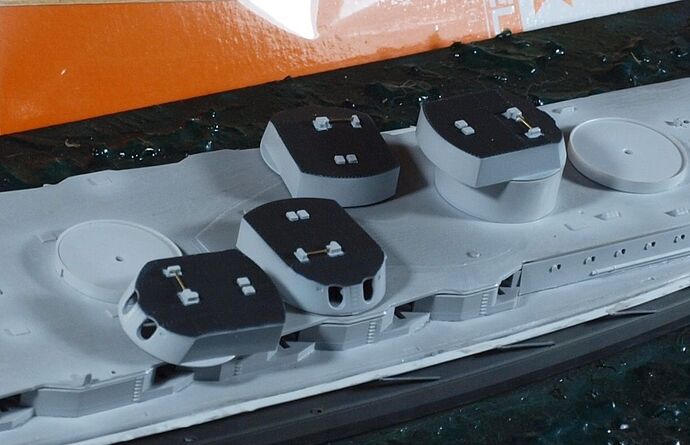 Nice paint work. I am building the Kronprinz at this time and have started on adding the torpedo nets.

The black turret tops do really set those ships off. What colors do you use for the lower and upper hull?

So my Derfflinger has been sitting on the bench for a couple (or more) years. I’m wondering what I should do about dusting it off. Suggestions?

Nice paint work. I am building the Kronprinz at this time and have started on adding the torpedo nets.

Thank you, Mark! It’ll be great to see how yours goes.

The black turret tops do really set those ships off. What colors do you use for the lower and upper hull?

I mix my own colors from Tamiya paints.
Here is a link to a color guide:
http://www.sms-navy.com/paint/sms_paint-overview.htm

Using jet black at this scale will look wrong. So, I lighten for scale. My turret tops are painted with Tamiya Panzer Gray.

I also deliberately paint light because weathering will darken.

Here is my entry into the campaign. 1/700 IJN Battlecruiser Hiei 1915 configuration. They kit is by Kajika release in 2017. 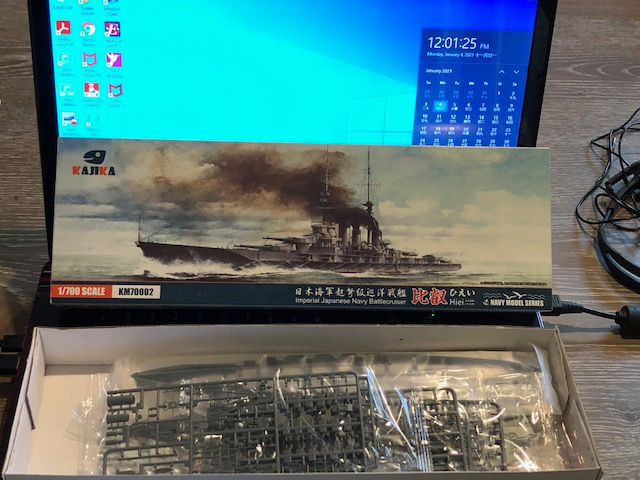 So I broke out the instructions for my kit (1/700 Flyhawk Derfflinger Gold Medal Edition) and am starting to reset. I now remember why I stopped on this build - my next step, whatever it is, involves new things, mostly involving PE.

That is fine, I love this ship!

A question for folks with more experience. I built the hull and added the torpedo net booms and anchors.

I think my next step is to build a water base which is kind of independent of the questions I have.

When building a kit like this to go from bottom-up or top down? I think doing the deck next is probably a good next step, but after I do that, I’m thinking maybe I don’t attach it just yet and finish the superstructure that gets glued onto it first.

I tend to go bottom up. Hull, Deck, superstructure. I do everything as sub-assemblies. I will try to get as much onto the subassemblies as possible and put all the super fragile stuff to the side.

After all the superstructure is glued down and in place then I put the fragile stuff on but in reverse, top to bottom. That way I am working away from it and down accidently knock something off. i.e a mid deck AA mount while gluing on radar etc. ( I hope that makes sense).

I always build my ships up and then out and build sub-assemblies which I installed when required. Build up and then out helps prevent knocking off previous install items. Don’t install any fragile items on the deck until the last, those always seem to the items that get knocked off or broken.

Hi folks, Here is my start photo for the build of SS Sirius for the Coal Burner group build. This kit has been released several times over the years as both the L’Occident and the Sirius. During my planning for this build I was considering whether to build it as the L’Occident, the Sirius, or an ACW blockade runner as it has many features of the early war ships. I’ve settled on the Sirius. The box shows the L’Occident. There is a 1/96 scale model of the Sirius in the National Maritime Museum of Ireland. I’m not sure if the owners, Saint George Steam Packet Company, had specific livery colors for their ships so I will use the museum model as a reference. 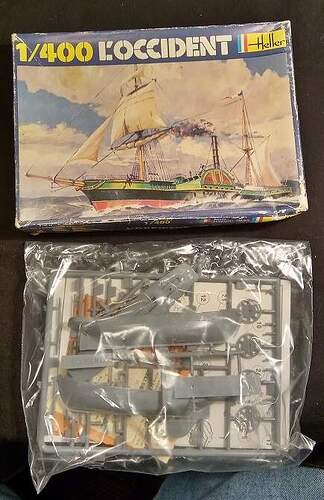 Overview of the ship:

SS Sirius was a wooden-hulled sidewheel steamship built in 1837 by Robert Menzies & Sons of Leith, Scotland for the London-Cork route operated by the Saint George Steam Packet Company. The next year, she opened transatlantic steam passenger service when she was chartered for two voyages by the British and American Steam Navigation Company. Sirius was the first ship to cross the Atlantic under steam power. She was commanded by an Irishman, Capt. Richard Roberts R.N. By arriving in New York a day ahead of the Great Western, she is usually listed as the first holder of the Blue Riband, although the term was not used until decades later.

Sirius was one of the first steamships built with a condenser that enabled her to use fresh water, avoiding the need to periodically shut down her boilers at sea for cleaning. Unfortunately, this also resulted in high coal consumption.

At the time Sirius was completed, two other companies were building steamships for proposed transatlantic passenger services. British and American’s British Queen fell behind when the firm building her engines went bankrupt. Construction on the rival Great Western continued without interruption and she was ready for her first voyage by April 1838. One of British and American’s directors suggested the company charter Sirius to beat Great Western. Overloaded with coal and with 45 passengers, Sirius left Cork, Ireland on 4 April and arrived in New York after a voyage of 18 days, 4 hours and 22 minutes (8.03) knots. The normal westbound passage by sailing packet was 40 days. When coal ran low, the crew were alleged by the newspapers to have been forced to burn cabin furniture, spare yards and one mast, inspiring the similar sequence in Jules Verne’s Around the World in Eighty Days. However, in reality the crew were able to manage and conserve the stocks of coal by burning four barrels of resin instead, and still had 15 tons of coal left on arrival in New York. Great Western departed Avonmouth four days after Sirius and still came within a day of overtaking her. Because Sirius was clearly too small for the Cork-New York crossing, she completed only one additional round trip before she was returned to her owners and, after a voyage to Saint Petersburg, resumed her regular St George company service, though on the Cork-Glasgow route.

In late 1840 Sirius was sent to Gibson’s Dry Dock at Hull for new boilers, but remained there over two years as the dry dock had to be specially lengthened.In the face of financial difficulties, the St George company was refinanced in 1844 and took the style City of Cork Steam Ship Company, with which Sirius continued her regular employment on the Irish Sea.

Sirius was wrecked in 1847. On 16 January, on a voyage to Cork from Glasgow via Dublin with cargo and passengers, she struck rocks in dense fog in Ballycotton Bay, Ireland. Despite being refloated, she was found to be leaking badly and, in steaming for the shore, was wrecked on Smith’s Rocks, half a mile from Ballycotton. The only lifeboat launched was heavily overloaded; swamped by heavy seas, the twelve passengers and two crew were drowned. Most of the 91 on board were rescued by rope passed to the shore, though twenty lives in all were lost. In response to the loss of Sirius, the need for a lighthouse between Old Head Kinsale and Hook Head on Ireland’s southern coast was recognised. Ballycotton Lighthouse, on Ballycotton Island, was constructed over the following years and lit in 1851.

That is too cool!

Hi guys,
Finally getting started on the Sirius. I laid out he parts for the photo. Not a large parts count so maybe I can finish it in the time remaining for the group build. The hull halves have wood grain above the water line as well as the deck so I’m hoping to accentuate this if I can. The spars have folded sails molded on so that simplifies things for me. 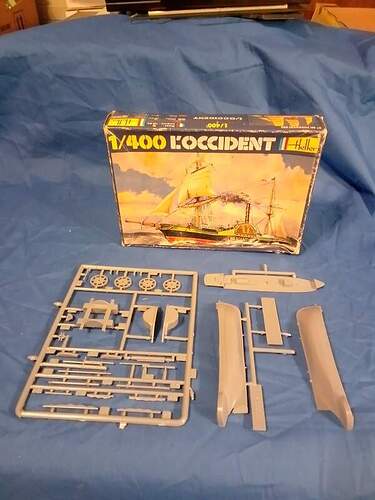 All I’ve done so far is glue the two hull sides together. I’m typing this while the glue sets.

Here’s a photo from the Ireland Maritime Museum website of the model of the Sirius. I’ll be using this photo for reference for painting and rigging. 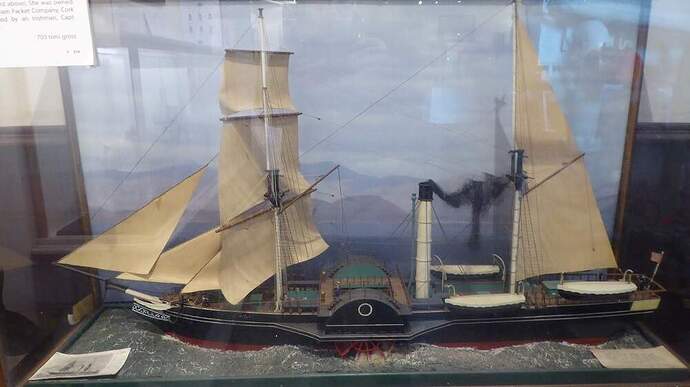 It’s been quiet in the group for a while. Everyone doing okay?

That reminds me I need to get started on my entry.

I have printed out the instructions for Derfflinger and started plotting, but have not taken a knife to plastic on it for my restart.

Hi folks,
Hope you all are making better progress than I am. I’m slowly working on the Sirius. I’m painting a little as I go so it’s taking me some time. As I’m gathering materials for the build I came across an issue for me that I have no experience with. It involves pe railings. I’ve little experience with them All I’ve ever done so far are horizontal runs and bends. For this build I have to run railings vertically over the curved top of the paddle wheels. Does anyone have any experience or recommendations on how to do this?
Thanks in advance for your help.
John