Can anyone identify this turret? 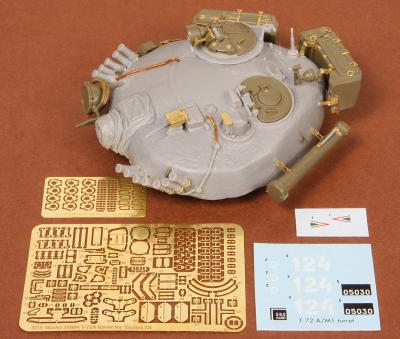 Described as ‘early’. Exactly what model of T-72 is this supposed to be for? It says M1/A, but if the Tamiya kit is also M1, then what are the differences?

The Tamiya kit is of a rare version. When Tamiya studied a subject, they studied an East German T-72, which was billed as an M1, but was a hybrid. Specifically it has an -M1 hull but an -M turret. So the Tamiya kit, OOTB, only accurately depicts an East German tank (how I built mine). If you want a more accurate model, switch out the hull to make an earlier M, or get this turret to make an actual M1.

What are the differences between an M and M1 turret?

Thankfully, the Tamiya T-72 I built years ago, I decided to put the GDR logo on it,.

IIRC the biggest difference is that the M1 turret had thicker armor, so the front-facing portion of the turret is thicker, more pronounced, with some shape differences. If you look at the Miniarm turret closely, you can see some of those shape differences. There may be some detail differences as well, but that is the big one.

I’m just looking at some old Armorama discussions and they seem to consider the Tamiya turret inaccurate even as an M turret. Which is disappointing, looks like I have a T-72M1 hull with an unusable turret in my collection.

If that’s true, I could replace it but I simply can’t remember the paint ratio I used for the hull.

The resin turret depicts the uparmored T-72M1 or T-72A turret, which had composite armor, and had a distinctive, slab-fronted look. The Tamiya kit has a turret that is intended to be a basic T-72M turret, which retained the conventional cast steel armor casting of the base-model T-72, but replaced the stereoscopic rangefinder with a laser system. Tamiya’s turret shape has been criticized as being a bit off. More to the point, the hull has the 17mm thick applique armor plate welded to the glacis, a feature normally seen on the T-72M1 or T-72A. Since Tamiya molded it in place, backdating the hull is a humongous chore (Verlinden offered a resin upper hull which has this backdate). This early turret/late hull combo was seen on a very small batch built for East Germany, and a preserved vehicle was used by Tamiya’s researchers.

To my eye the kit turret looks to be just a poorly executed M1 turret as it has the characteristic undercuts at the lower edge .

Not the best way to do it, I know, but I just compared the T-72M/Hybrid that I built by Tamiya, to the T-72A in ‘War Thunder’, where the game allows you to pan around the vehicle in 3D.

Is the Tamiya turret a botched M turret, and that is sometimes why it looks like an M, other times an M1?

I’d really like to see side-by-side comparisons of the M/M1 turrets.

Sorry, but the Tamiya kit representing a rare type is one of those modelling myths that just won’t go away. The Tamiya turret doesn’t accurately represent any T-72 turret type: If it was an M1 it should be far thicker at the front; if it was an M then the turret faces should be far more sloped.

Thanks for the short explanation. Buy new turrets or use the Tamiya lower hulls as basis for conversions

Only problem now… which damn paint color is that hull

Amusing Hobby is going to be releasing a T-72M1 soon with some great options for markings.