Was the interior surfaces of canopy frames typically painted the same color as the cockpit interior, the fuselage interior, fuselage exterior, or an entirely different color?

Hi Biggles, it often depends on the era but generally, it would be painted the cockpit interior color. I think I have a “but” example photo, so give me a minute to look for it.

That said, WW2 US aircraft: cockpits were painted a cockpit color. In multi-crew aircraft, i.e., B-17, the gunner areas were left bare metal, while areas for the navigator or /radioman would be painted, usually the same color as the cockpit.

This is a USN Fury: 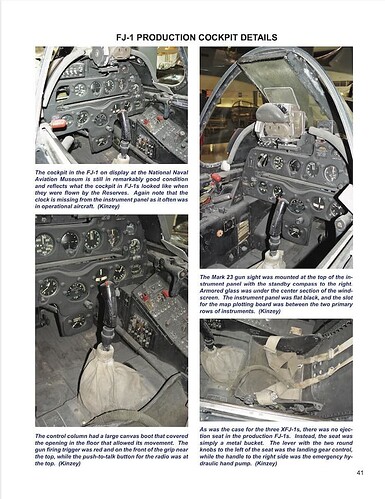 CAF’s Fifi canopy framing is unpainted or painted dull aluminum. But Enola Gay was restored, IIRC, with the cockpit untouched, and its framing is a ‘cockpit green.’

While researching my F-84, I found a posting from the mid- late-50s from the F-84 TM that presented the current color standards, verses the new FS standards. Colors changed, as did what was/was not pianted.