after following this forum for a long time silently I finally got around to create an account, primarily because I am seeking help with some questions that have been bugging me for too long:
Being inspired by Miniarts new offering with their GIs in rain gear I wanted to create a diorama in the rainy final days of the Second World War with some allied soldiers and a small armored car. However I’m not a big fan of the American light armor of the War, M8s, M20s, M2s, M3s and the slew of Jeeps with improvised armor. However I do like the range of British armored cars and as I could not find any Allied Army that used British Armor und US made uniforms I was quickly faced with the question of that kind of rain gear was issued to Commonwealth Units in the ETO. With Britain being the kind of country it is I found surprisingly little information in the subject wich is why I turned to you guys.

Thanks in advance to anybody helping me out with researching this niche subject!

Here’s an example of Canadian issue rain wear. There’s a full length coat and a cape/poncho/ground sheet thing. They’re kind of the right shape but not really, especially the cape as there’s no hood.

For most soldiers the only waterproofing equipment available was either the groundsheet/raincape, or the gas cape; the latter obviously being part of the anti-gas attack equipment. Due to the perception that the gas threat had receded - approximately mid-war - it was authorised to be worn as protection against the rain, however, it was not an especially robust piece of equipment.

The groundsheet/raincape was a more substantial piece of kit being basically made of rubberised cotton; that it could keep the rain out, was laudable, unfortunately such material also tends to keep other moistures - eg perspiration - in, so one’s uniform becomes soggy quite quickly depending on the exertion undertaken. The same applies to any other impermeable material; post war ponchos made of nylon perpetuated the same drawbacks.

I’ve just filched these images off the www: 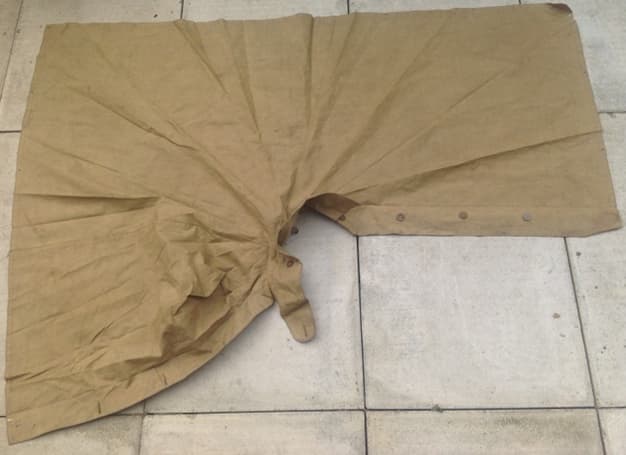 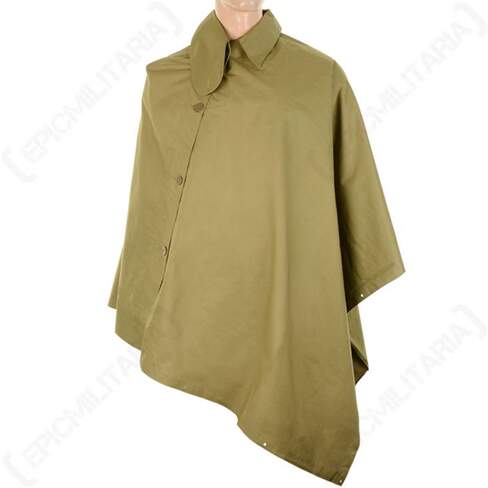 And the Gas Cape: 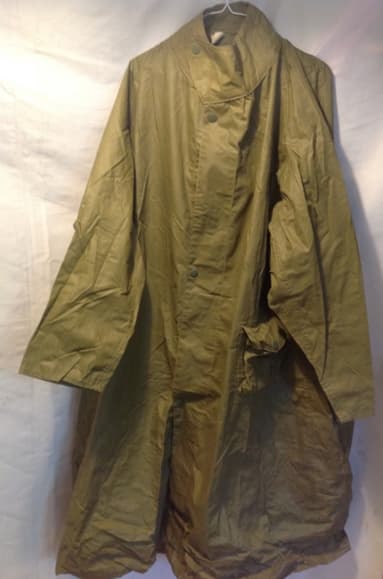 This was (obviously) designed to be worn over equipment so had a sort of baggy pouch at the rear to encompass the Small Pack from the soldier’s personal equipment. It had a slight glossy sheen due to the linseed oil applied as a protection against liquid chemical agents which also made it sticky to the touch. Some were issued in camouflage colours of green and brown. 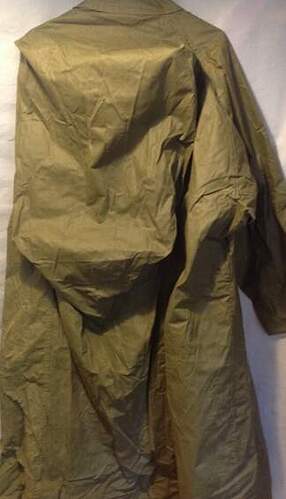 The “pouch” at the rear can be seen here. The cape was fitted with various press-stud fittings to ensure a tight fit when actually used in its anti-gas role. Gauntlets, respirator and overboots were also part of the overall protective ensemble, but of course you state that you’re planning for a diorama late war so you can discount these – I mention them just for completeness.

There were, as far as I know, two other weather-protective garments and that was the private purchase pattern Trench Coat for officers, (which could reflect any number of variations) and a plainer (ie, no epaulettes, yoke or other fittings etc) issued to those soldiers who may be exposed to the elements for a considerable time eg RMP undertaking traffic control, and this was made in a khaki rubberised fabric and known as “Coat 1A”
.
Motor cyclists had their own weatherproof raincoats but I have not included these details.

I KNEW you’d have the answer!

No no. Brian had an answer, I just had a website with some pictures. In this particular case however, fate has it that Brian’s answer and my pics actually line up!

Don that’s very gracious of you - I suspect our Send buttons were hit at roughly the same time - I’d certainly missed your input when I was still typing.