I am considering to build a kit of M3 Stuart Honey of Academy.
I know that the kit has some unaccuracies. I am trying to replace the suspensions with self produced ones (that could be useful for the old kit of Tamiya too that I have in my stash).
I have read that the kit of Academy has other unaccuracies, particularly the size of the turret. Does anyone know more on this? Where could I find good drawings on the web to decide if/how to correct or eventually rebuild the turret?
Are there other problems to resolve? I’ve seen too triangular holes in the wheels, I’ll try to round them with some thick paint or liquid putty.
Any help is welcome.

The main issues are the incorrect interior (this is for a later version of the vehicle), lack of some internal hatch detail, The poorly represented vision blocks on the cupola and no internal detail, and of course, the suspension. Button it up and you overcome the first issues.

If you can find the old AFV Suspension set, it will save some heartache and fix the biggest problem: 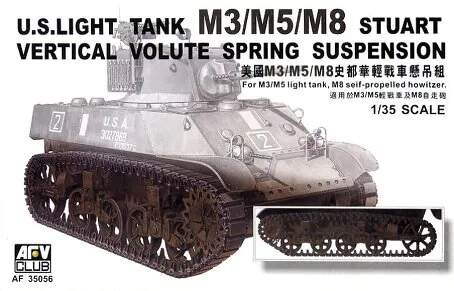 Note the tracks are not included in the suspension set.

You may even find a cheap second hand AFV Club Stuart to use as a donor.

In regard the turret measurements, there are differing views, but those who say it is out, speak of only very minor discrepancies, which are not visible to the naked eye.

Hi,
I’ve already made new 3D suspensions and the kit has two sets of tracks, so it don’t seem a problem.
Eventually, the pieces of the interior would be good to be employed on an M5? I have a kit of AFV whose hull has nicely moulded inside walls, but no inside parts.
I’m happy that the size of the turret is not so off. Is this the same for the turret of the old Tamiya kit, the horseshoe version? I have one and I’m thinking to use the spare tracks of Academy and AFV and the new printed suspension to make it acceptable

The old Tamiya M3 35042 kit is way off dimensionally. Don’t bother with it. 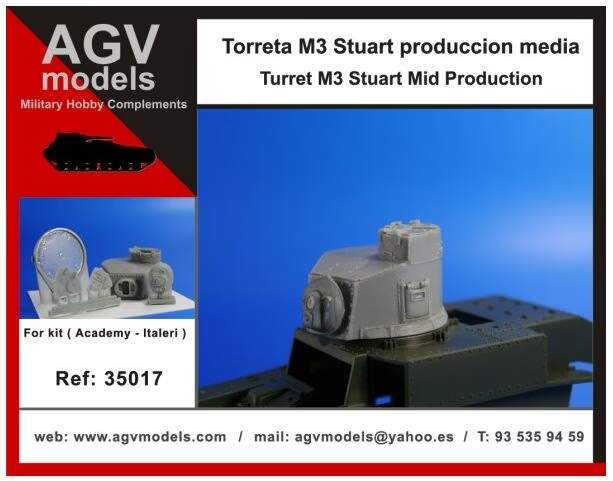 Way off… both the hull and the turret?

Hi,
I’ve compared the kits. It seems that the old hull of Tamiya matches well the Academy, but I have found that the turret of Tamiya is 2 mm narrower. The types of turret are different, so I am not sure that the comparison is fair.

I built the new Tamiya kit a few years back on the old site and Roy Chow dropped some links that might be useful and AL mentioned a Facebook group that might help if you do Facebook.

Interesting, thank you.
I’ve googled a bit and I was confirmed that the Tamiya turret is way too small, while the one of Academy is fairly right.
If I want to use all my kits, I could make a turretless recce tank from the Academy one, correcting the inside, and use the Academy turret on the old Tamiya one.
Some parts of the inside of Academy, as the turret basket and ammo cases, could be moved on an M-5. Spare wheels from the AFV M-5 , that has a double set, could be used for the Academy that has uncorrect ones. I hope that it won’t be too difficult to arrange the pins.