The latest off my ‘bench’ (i.e. the kitchen table) is the excellent Tamiya Panzer III, along with an interesting set of Masterbox figures. Except for the addition of the Tamiya PE screens, the panzer was built OOB. I did add the scratch-built storage rack and the stowage of course. The gas cans are from a Bronco set, and the stowage is from Value Gear. The canteens and mess kits were donated by a friend and fellow club member. I used the kit supplied decals, which went on very well. The Masterbox figure set really piqued my interest, particularly the fellow on the Donkey. He was built OOB, and the fit was terrific, no putty was needed. I just added the reins and the bedroll. The crewmen were intended to be used with a Panzer II, so a little modification was needed to fit them into the turret hatches. I also replaced their heads with ones from Hornet, though the kit supplied ones were quite well detailed. 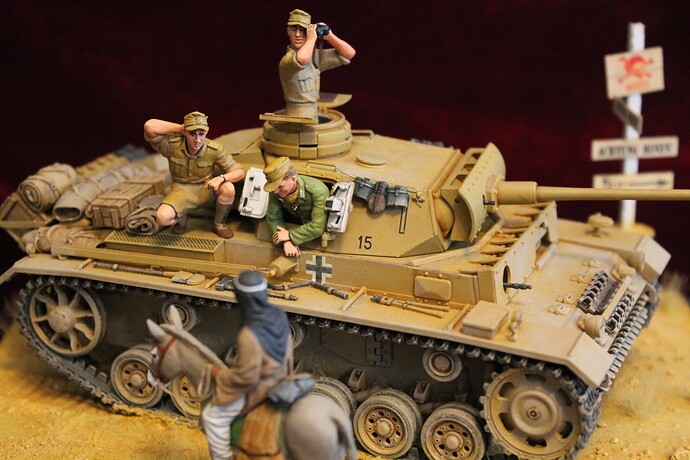 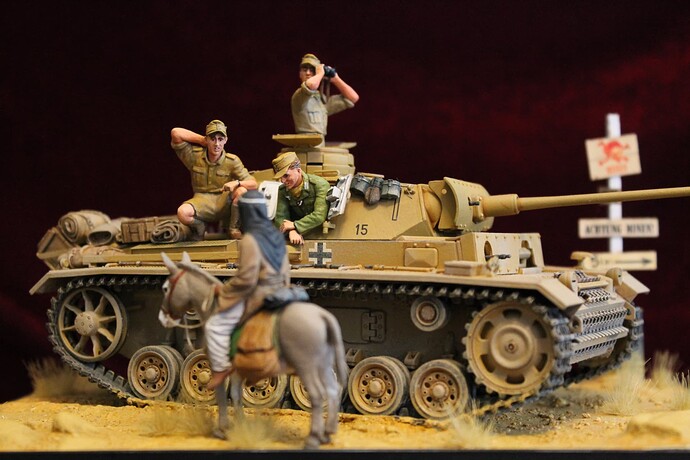 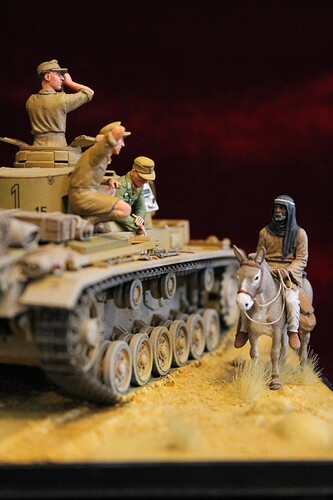 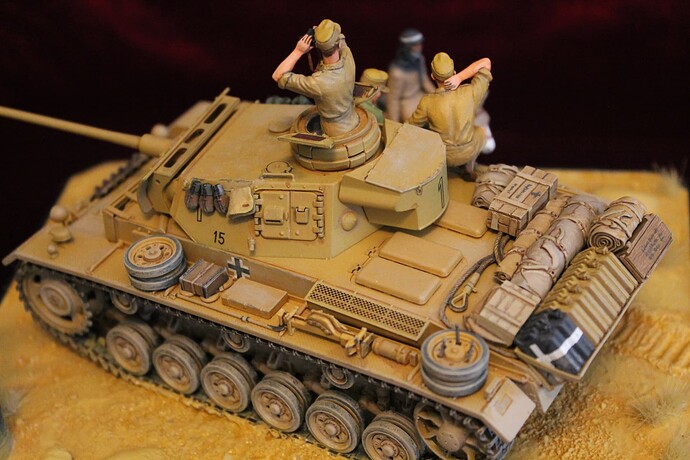 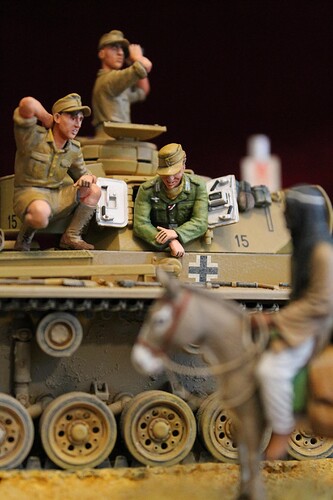 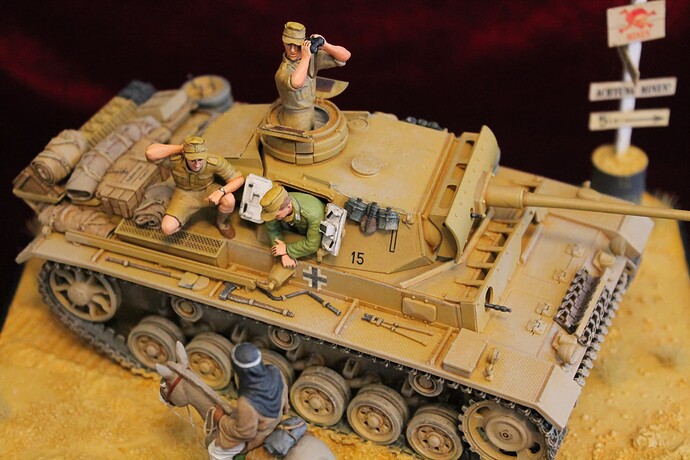 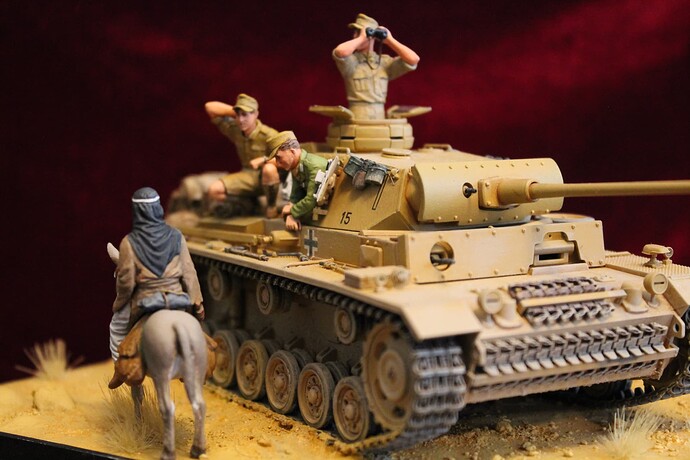 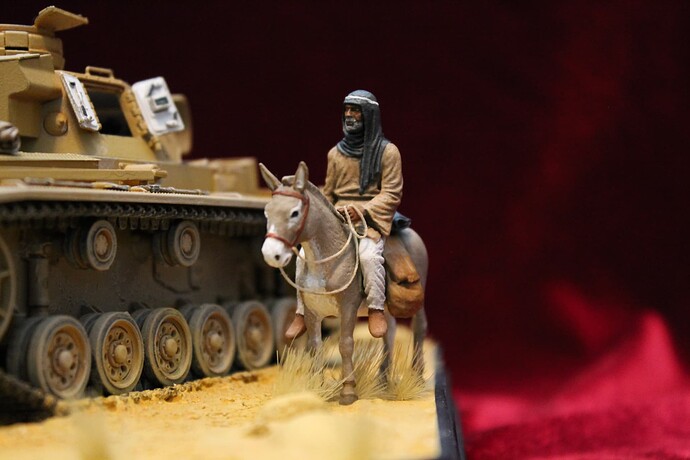 The signs came from Duplicata Productions, and the barrel was from a Tamiya set. The ground work was made from Durham’s Water Putty, with rocks from my backyard. The model was painted with Testors’ Model Master from a rattle can, and weathered with various paints and pigments. The figures were painted with acrylics. Thanks for looking, all questions or comments are welcomed.

Nice!
I like the stern Arab face and the “innocent” youngster kneeling’s face too.
If I had to make one comment, it would be that the tank looks too clean and pristine.

Thanks, much appreciated. The Arab’s face was well molded and just needed painting to bring it out. I like using Hornet’s heads because of their varied and detailed facial expressions, and felt an innocent wide-eyed look best fit the scene. As to the Panzer, I’m not a fan of real heavy weathering. Most of the dirt is around the lower hull and suspension. There is some chipping and it is quite dusty, though it doesn’t show up too well in the pix.

Very nicely done. I’ve got to get hot on painting figures to add more life to my builds…

A kitchen table?! Al, I’ve seen your work up close and in person, and it is extraordinary to say the least. I have always pictured you with a big workbench surrounded with the latest and greatest tools, paints, and equipment. To think that you produce your master works at a kitchen table humbles me, sir. This is just another example of your skill and care, an excellent model with stunning detail.

Thank you, Rick. I’ve always liked to add at least one figure for human interest and to give a sense of scale. But I find that I’m doing more and more multiple figures, vignettes, and small dioramas lately.

Wow. Thanks for the lavish praise, Matt. Yep, the kitchen table, luckily I have an understanding wife. I do have a large assortment of tools & gadgets, not to mention paints. I just pull out what I need and have to pack it all away whenever we have company.

I’ve got a real small home and always intended to turn my son’s room into a ‘man cave’, but time and circumstances have so far prevented it. Looking forward to seeing you at Armorcon.

Nice little story, there. Engaging. IMHO, That Panzer is too clean. Period photos show them as covered in desert dust, and with a lot of wear and tear. That’s the fun part for me…

Thanks, the Masterbox set does provide a ready made vignette in a box. As far as dirt and grime, the problem is with my photography. The tank is a lot dustier than it appears in the pix. And while I agree that some tanks do look all beat to hell, others don’t. It all comes down to a matter of taste in the end.

Outstanding work! May I ask what color of Testors Model Master spray paint you used? I might have to try it out

Thank you, The paint is Testors # 195506, and is called ‘Flat Afrika Mustard’ (FS30266). Lamentably, Testors has gone belly up, so you might have trouble finding it.

Beautifully built, presented and photographed - when my eyes keep on doing circuits & back-tracks I know it’s a gem. Like some others I thought it too clean (a dearth of earth?) but an easy explanation might be it’s just been offloaded dockside and this is their first drive out of town, first contact with a local etc. Maybe amending the title to “First Desert Encounter” would keep us dustier types in our boxes

Thanks, Tim. I confined the most heavy accumulation of dirt & grime to the lower hull and suspension, with a light coating of dust on the upper surfaces. Unfortunately that doesn’t show up well in the pix. I feel there are a lot of factors involved in deciding how much weathering should be done. The type of terrain, weather conditions, and the period when the action takes place for example. City, desert, Summer, Winter, rainy, dry, peacetime, or wartime. It can go from none at all, to quite a lot. I know in a lot of circles it’s become ‘fashionable’ to do a lot of extremely heavy weathering, but I believe it can also be overdone. And I know quite a few modelers who firmly believe a model should not be weathered at all. It’s all up to the individual in the end to decide what looks right.

Lovely piece of work here Albert- the way the figures are interacting with each other is particularly well observed and the faces are painted accordingly. You also have the focus resting nicely on the tank and the eye is naturally drawn over it to the figures posed toward the right side. The equipment on the tank is arranged and finished nicely too, giving it plenty of interest on the rear especially. I have to mention the donkey too though- it is simply ace and really well painted- bravo!

Yes, the donkey is very well done. I find that animals are difficult to render accurately. They require a deft touch and much finesse to look realistic. Thanks for posting!

Thank you, Karl. Much appreciated. I didn’t start out with a plan or an idea for the scene. I had started working on the tank and was looking for a figure, or figures, to go along with it. Lately I’ve been liking adding a civilian figure to a scene for a bit of color and interest. When I saw the Masterbox set, I was hooked. 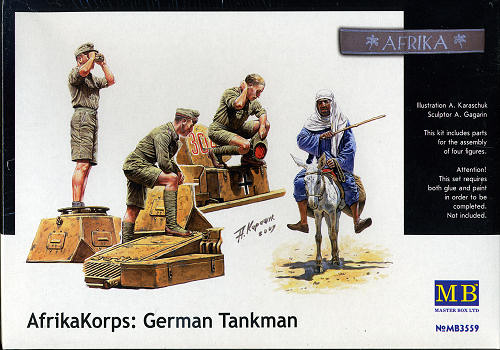 After I got them, I started playing around with their arrangement until I got one that looked good to me. I think the head is a focal point of interest on a figure. So, I like to replace them with ones from Hornet (I’m not a shill, just a fan). I was lucky enough to find one set that had the sort of expressions I wanted. Originally, I was going to have the fellow in the cupola peering through his binoculars, like in the box art. I just happened to try it turned slightly to the right, and found it worked much better that way. It was all kind of serendipitous really.

Thanks, John. I was real happy with how the Donkey came out. I use a lot of acrylic craft paints. There are several brands, and between them they have a vast range of colors. I was lucky enough to have one called ‘Mushroom’ by a company named FolkArt that was perfect.