Why this particular vehicle? I have one in storage and an IDF upgrade is available from Accurate Armour. Also easier to build than a Merkava or Magach. Ironically I saw a picture of one used by the Lebanese military but not the IDF.

Based on the air-recognition panel, the .30 cal, the uniforms, gear and the surroundings, I would say this one was shot in Lebanon in '82. 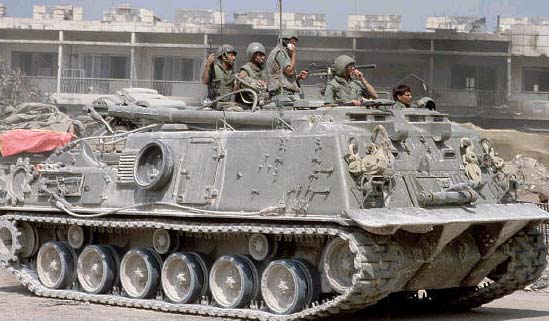 Here’s the corresponding caption from the Gettyimage website: " Israeli soldiers in an armoured vehicle pass destroyed houses on the streets of the Lebanese port city of Sidon during the Israeli army invasion named “Operation Peace for the Galilee” in Sidon, Lebanon, in June 1982. (Photo by Bryn Colton/Getty Images)"

Well, the Israelis did attack with a large armored force. Why would they leave their recovery vehicles behind? Between typical mechanical breakdowns and combat damage/losses, the ARVs will be needed.

I assumed they did, but was surprised I didn’t see any pictures in my Concord book.

kind of a rule that when you move an entire troop into the gambit; you take the Track Sargent and he crew with you. normally they’ll stay behind and wait for the call
gary

True not many pictures at all in my references if any. Mine are old though…

1 Concord book is hardly the the end all be all on the subject.