I remember reading that after WWs, in the USSR there followed the “Greatcoat Summer” because there were nothing besides military uniforms available to wear at the time. So I wondered about France after Waterloo and wondered if that was the case for the French populace in 1815 as well. I can imagine discharged French soldiers in splendid uniforms walking past more plainly dressed occupying soldiers from other countries.

I thought I’d read that the British adopted the Guards Bear caps after 1815 and Waterloo. Were they not originally based on the high French hats? 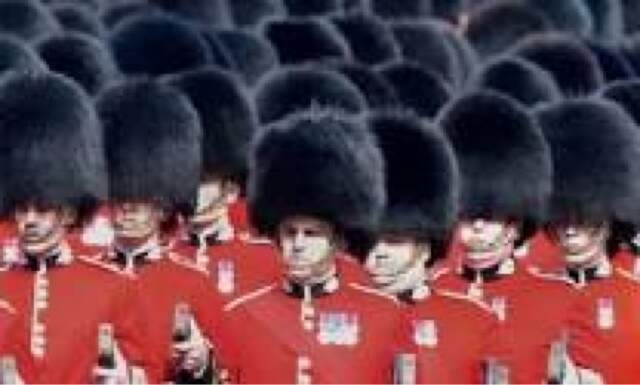 Yes, the Guards adopted them under the mistaken impression they had defeated the Grenadiers of the Imperial Guard. In fact the British Guards Brigade was attacked by the Chasseurs of the Guard, but they still wore bearskin caps. In fact there was previous for the wearing of bearskin caps in the British Army. Line Grenadier companies in British regiments adopted bearskin caps in North America, both during the French/Indian Wars of the 1750’s and the War of Independence. They replaced the normal cloth mitre caps originally worn by grenadiers, which marked them out as elite companies rather than the “hatmen” of the centre companies. Around this time light companies or skirmishers also came into being.

You are almost certainly correct, because released soldiers frequently didn’t have any other clothes than their old uniforms. There were no “demob suits” for old soldiers in those days and the prospects for the demobilised soldiers of all the nations involved were bleak, even assuming they were sound in wind and limb. The sight of limbless uniformed beggars was common after the Napoleonic Wars, not just in France, but in the UK also and probably the other nations too. On the other hand, parts of the uniform would probably be sold for cash, so it’s not impossible that even civilians would wear bits of uniform.

You are almost certainly correct, because released soldiers frequently didn’t have any other clothes than their old uniforms.

I can’t be sure, but I suspect while the officers would have bought their own uniforms (and all their other kit) your average enlisted peasant would not be able to afford, say, a Hussar outfit and it would be provided by the Regiment (or a very rich commanding officer who regarded the unit as his private army). Veterans who were discharged by reason of mutilation seem to have retained their uniform coats as an aid to their (licensed) begging. However, other items normally worn in barracks for fatigues might have been a sort of discharge bonus. I believe that at least in the French army soldiers joined savings clubs, something similar existed in the Roman Empire. I suspect a discharged soldier would be wearing overalls, waistcoat or stable jacket, greatcoat or cloak, and a bonnet de police or bicorne. I once did a Napoleonic cavalryman in stable dress mucking out… Historex actually have parts available in their spares range to enable the construction of such figures.