Hopefully this year the pandemic will be defeated finally.

My latest project is a Fw 190 A-7 with “Doppelreiter”.
At the end of 1943, the Graf Zeppelin research institute was commissioned to look for an alternative to the usual way of attaching additional tanks to wings. One solution that was implemented and also tested was the so-called “Doppelreiter”.
These were two tanks, each with a capacity of 270 liters, which were attached to the top of the wings. The tanks could be assembled in just under 10 minutes. Completely filled or empty, the “Doppelreiter” even improved flight behavior so that they did not have to be thrown off during the aerial combat.
Jagdgruppe 10, commissioned with the flight tests, criticized the flight characteristics when the tanks were half full. The trials were completed in September 1944, but there was no series production.
The Fw 190 A-7 used for testing was withdrawn from the regular series.

The kit of the 190 comes from Dragon. A veteran that requires quite a bit of rework. You have to fill and sand the areas of the engine cowling and the transitions between the fuselage and the wing roots.

Enamel paints from Humbrol were used for varnishing.

The figures are from ICM and they are great. They were painted with Revell paints. 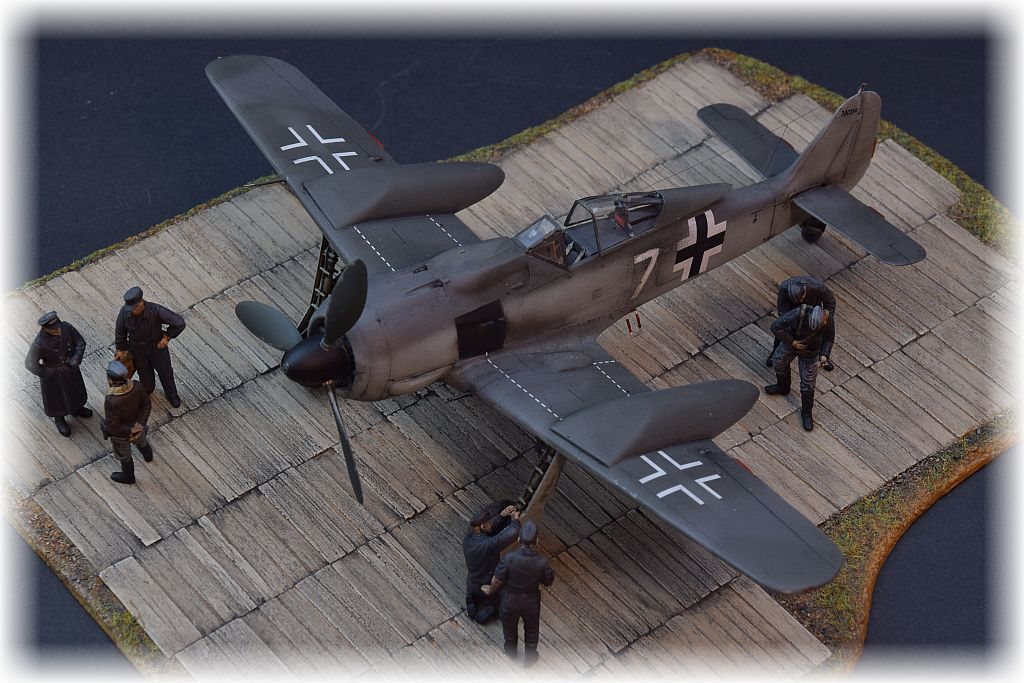 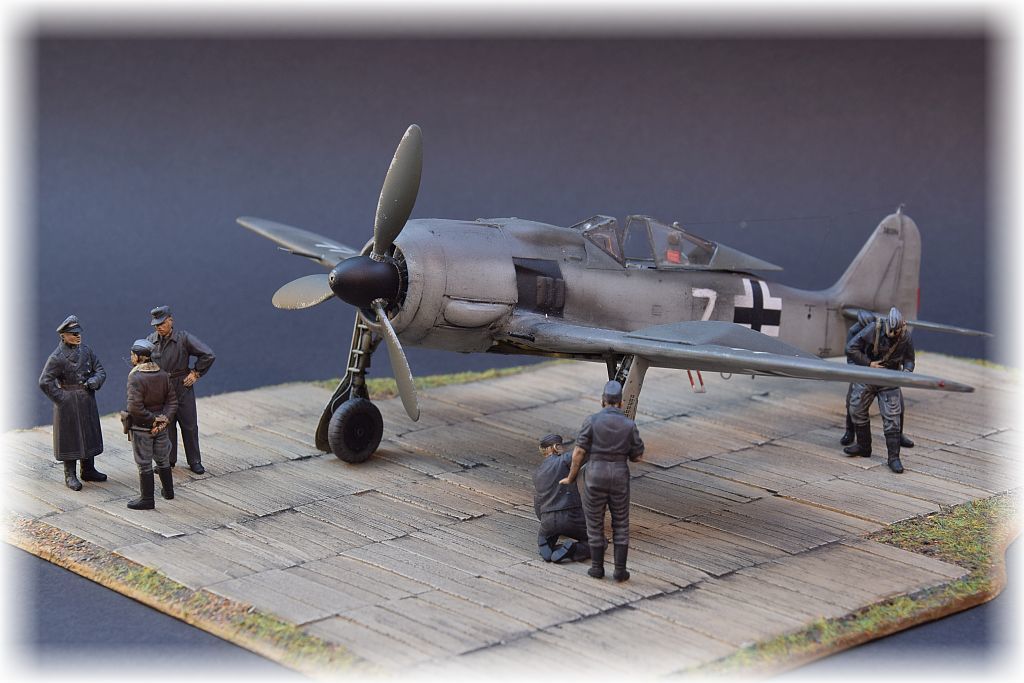 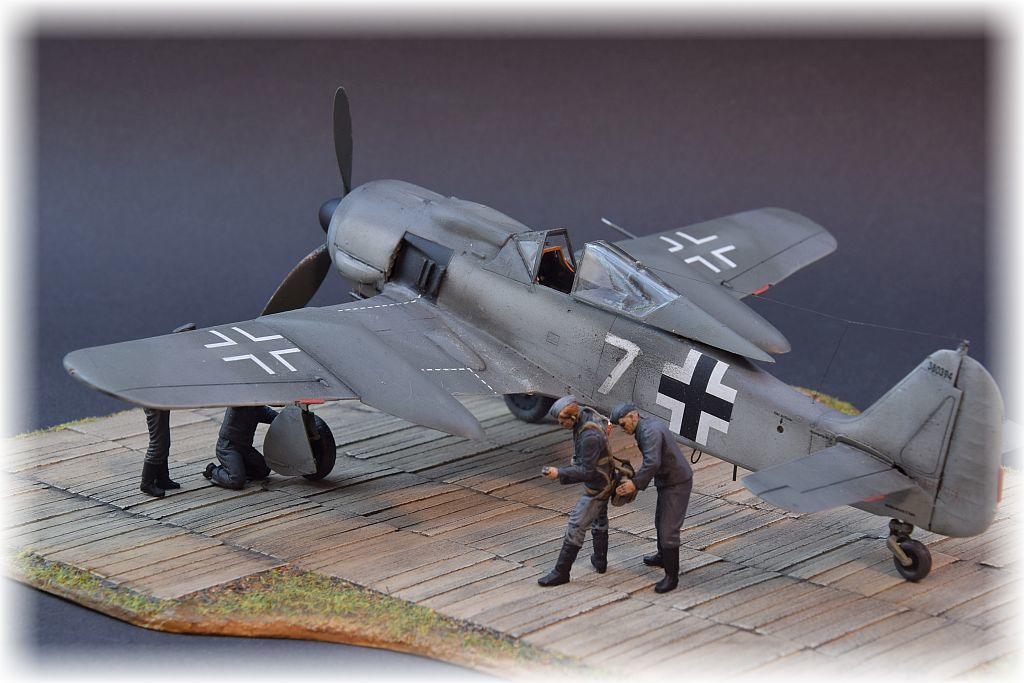 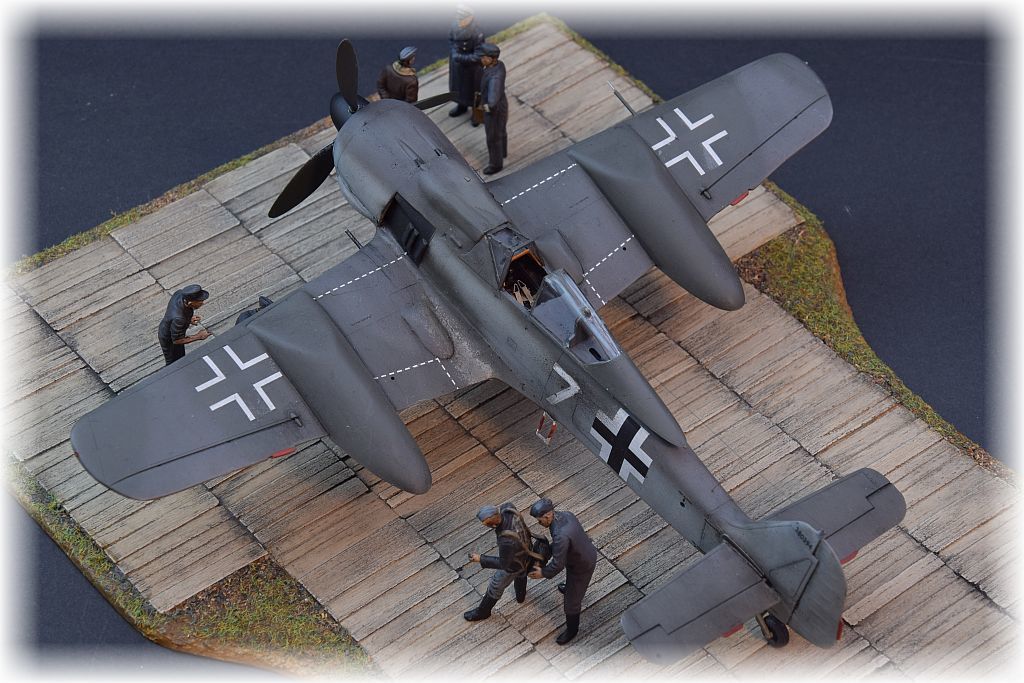 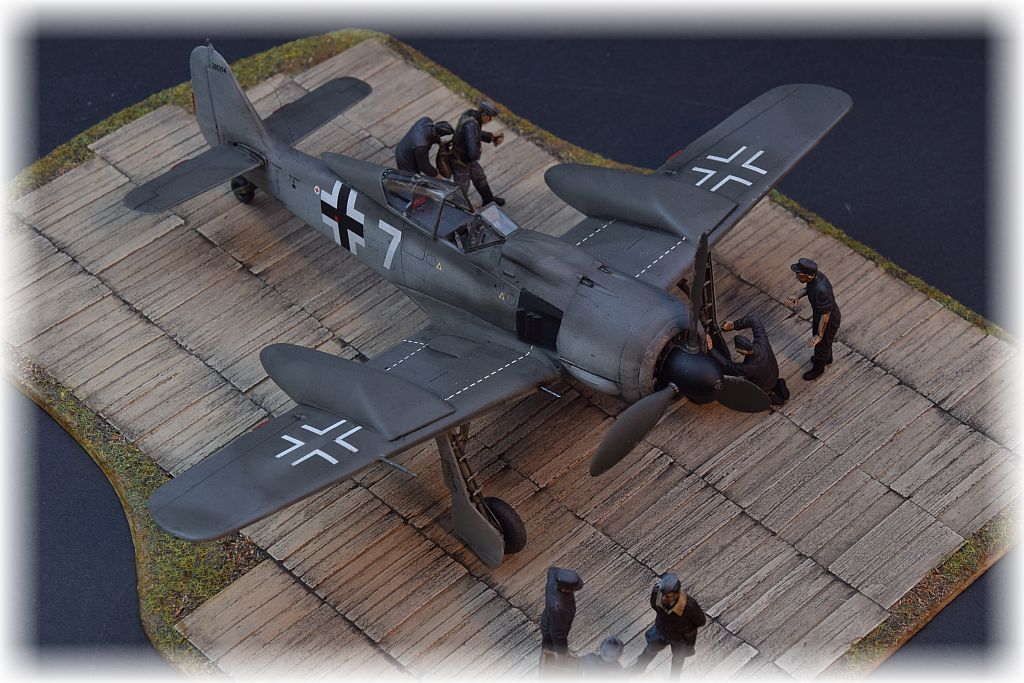 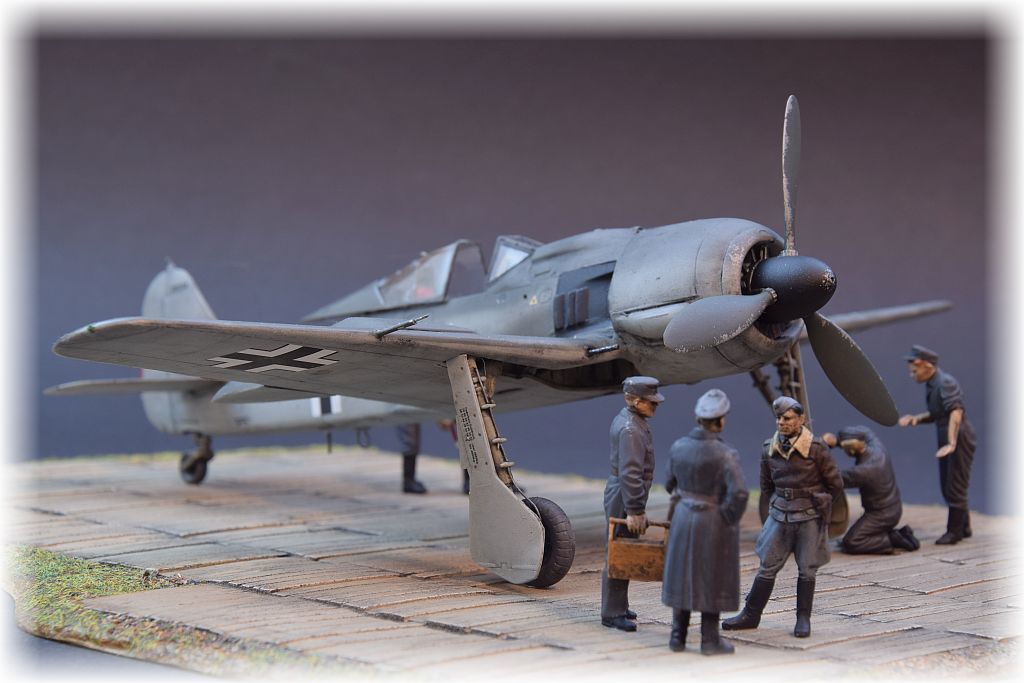 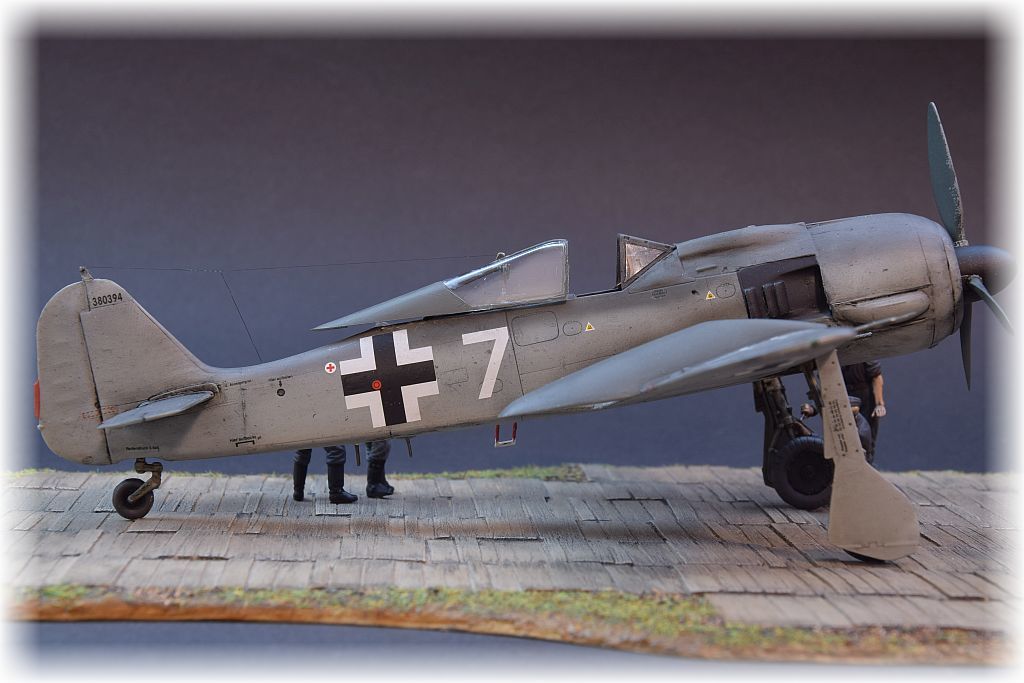 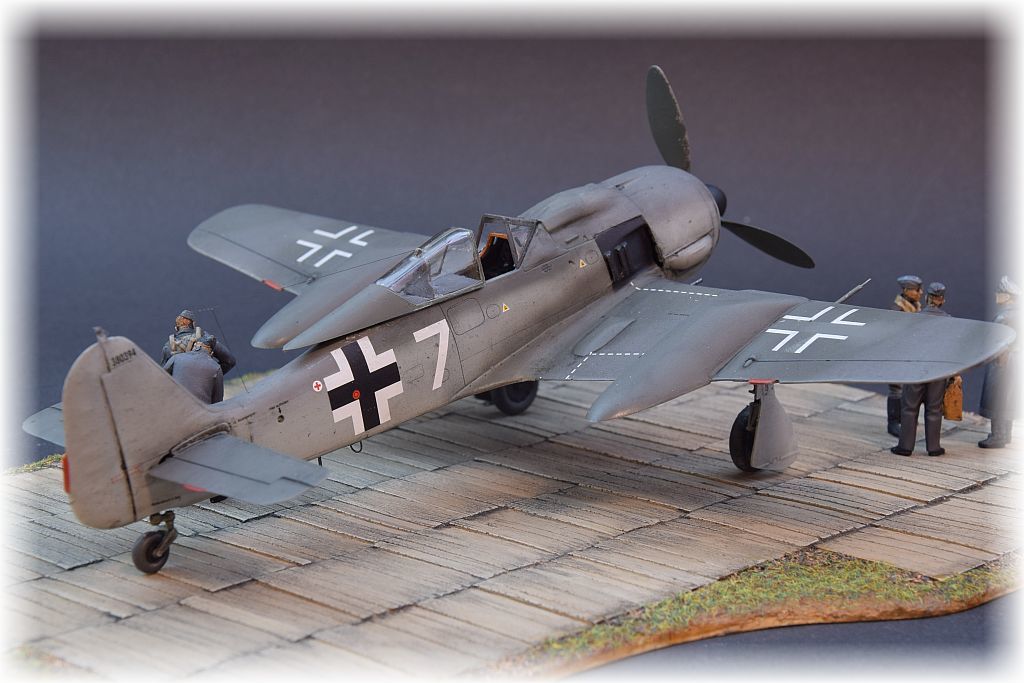 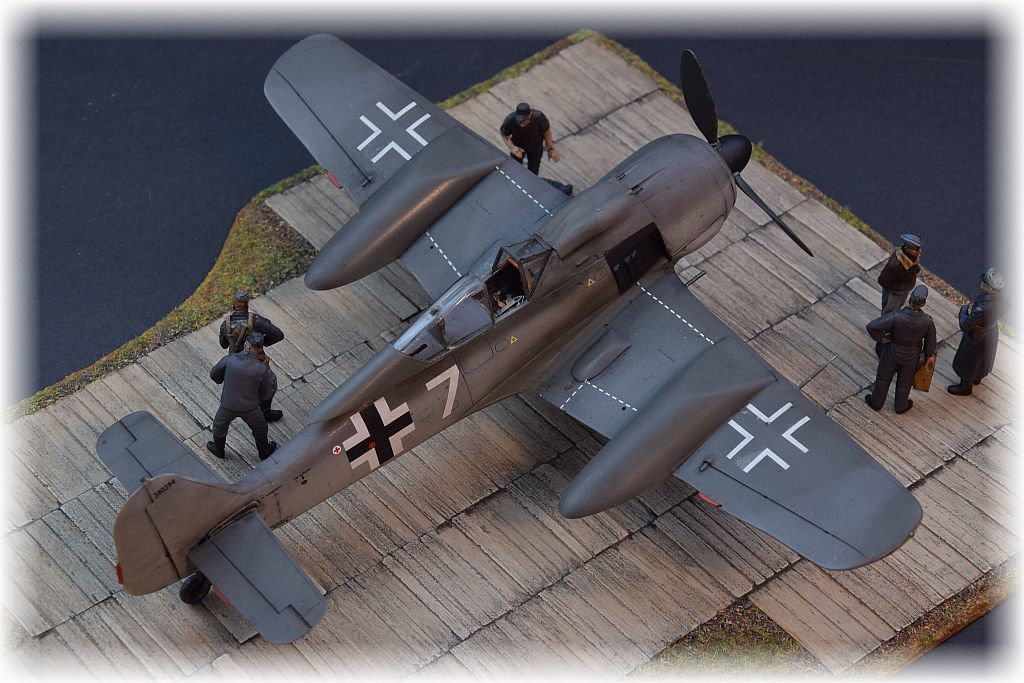 Thanks for your comments, mates!!

@BigZimmo I somehow missed this one when you posted it in January! As always, a beautiful model with an interesting story. I often toy with the idea of adding figures to my builds but I would stick to a pilot and possibly a mechanic, I would never consider doing seven of them

Hi Magnus!!
I always think it’s nice to place a model in a small scene. The 190 with the “Doppelreiter” (Double Riders) was an experimental aircraft, so it made sense to me to place a some “people” around.
But everyone as he likes. That’s the beauty of our hobby. Everything is possible, nothing is neccesary!!

But when I think about your great model work, I can imagine a complete diorama a la Magnus very well!!!

Completely filled or empty, the “Doppelreiter” even improved flight behavior so that they did not have to be thrown off during the aerial combat.
Jagdgruppe 10, commissioned with the flight tests, criticized the flight characteristics when the tanks were half full.

I think, when the tanks were half full, the fuel would (probably) slosh back and forth in flight. Maybe that could explain the reason for the critical flight behavior.
This was not the case with completely filled or empty tanks.
I can’t tell now if the fuel was stored into cells inside the “Doppelreiter”…

I get what you’re saying but it just seems like an odd observation.

If the tank was full, it would soon be ‘half full’ - or what would be the point of having an extra fuel tank?
So basically, it only really improved flight characteristics at take-off, after that it was a liability until it ran dry…

You are absolutely correct.

They simply wanted to find a way to increase range without impairing flight characteristics. And of course they also wanted to save raw materials. A dropped conventional auxiliary tank always meant the possible loss of material and fuel. Certainly more important for the German side than for the Allied side.
However. It was just an experiment that was discarded.
One of many curious projects in that times, which I think are very interesting for us model builders.