Hi all - just finished these two up just in time for the year end . I built them side by side as they have several colors in common. They are both nice kits but the Dora being an earlier release had some minor fit issues typical to kits meant to be built opened up rather than buttoned up . Both were built OOB with the exception of Eduard resin wheels for the A4 . To be honest the kit wheels are nearly as good.
I had some problems with the decals - Eduard packs these with a waxed paper sheet over them, presumably for protection. The problem is some of the wax transfers to the decals leaving a mottled effect that acts as a resist for the decal solvent. They need to rethink this packaging method.
Some years ago I built a couple of their 1/48 WW I kits - other than those these Fw’s are the only complete Eduard kits I have done - They were very enjoyable, so much so that I immediately pulled a couple out of the stash ( Bf 109 G6 weekend ready for pre shade as I type this ) and also ordered their new Wildcat.
So here they are - hope you like them and all comments welcome. 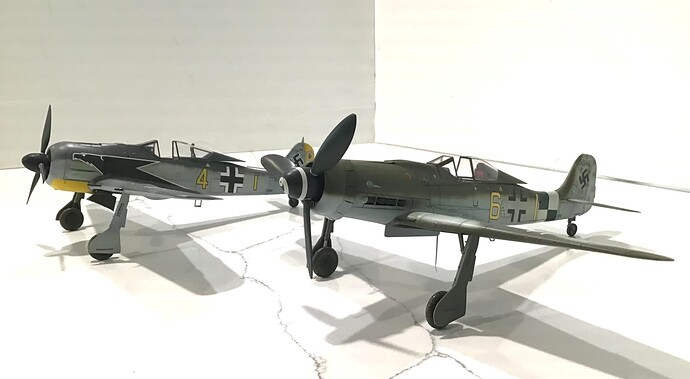 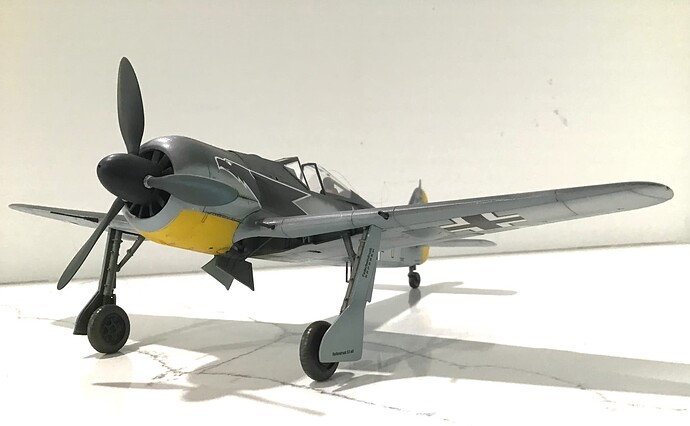 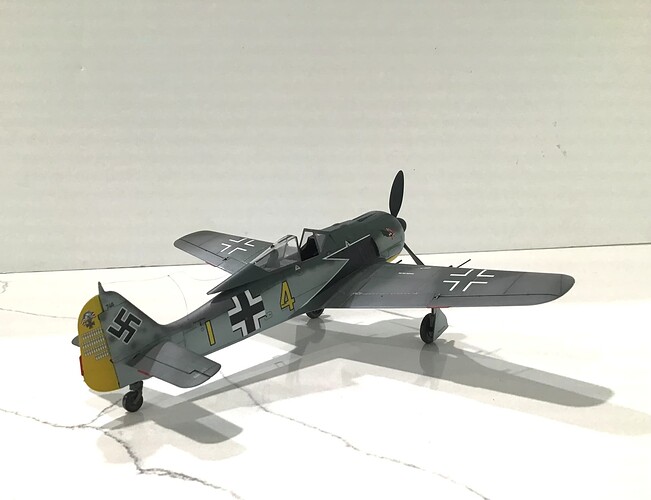 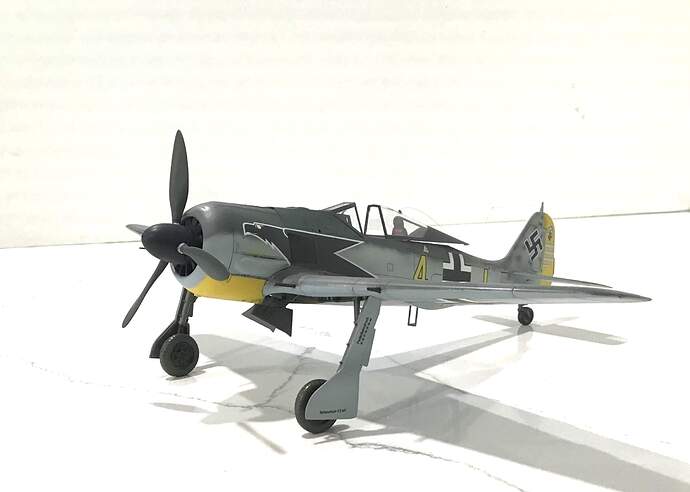 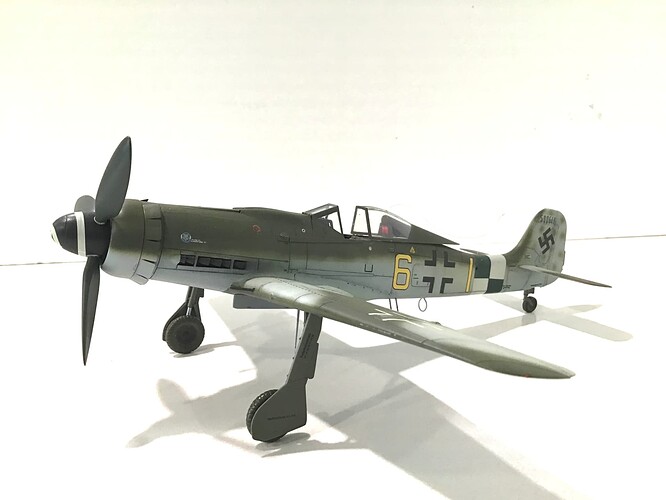 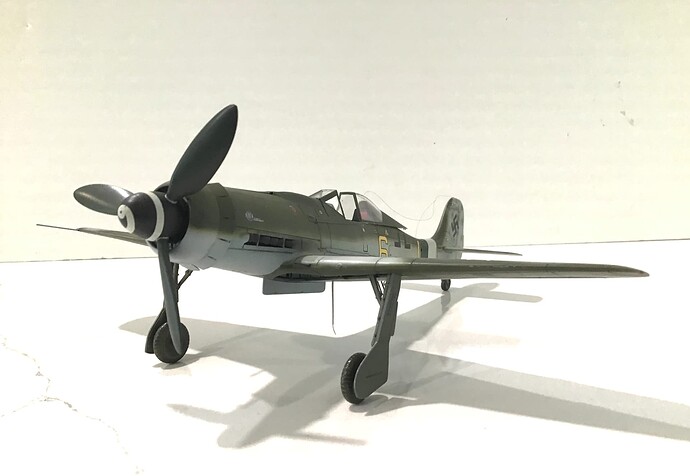 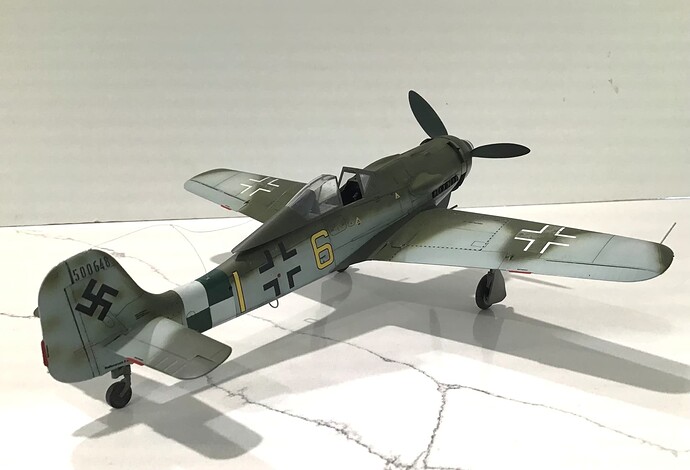 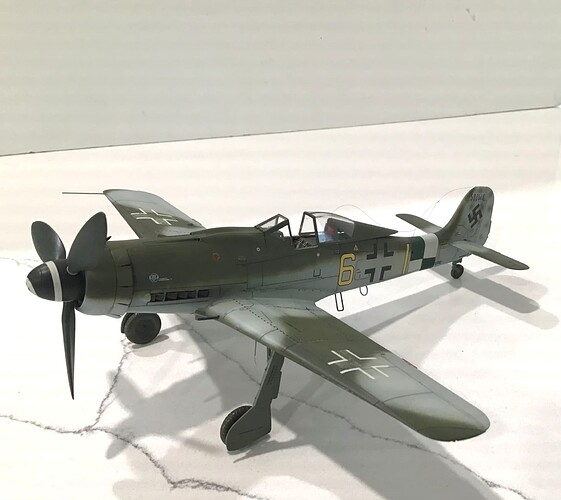 Nice job-I need to do a duel build one day.

Man, you put a lot of hours into these projects whao!!! I bow to your skill and consideration to the hobby.

Thanks for the kind words gents.
HG - coming from a guy with your skills I am flattered .

I always think the 190 is an elegant fighter and youve captured that really well.

Richard very nice work. I especially like the camo pattern on the Dora, the wings specifically. The colors are RLM 83 and 76? Is the 76 early or late? i would say early as it is closer to blue grey than sky.
Great work, I need to do a Dora. Happy New Year all.

Hi Joe - Thanks for looking in - mostly see your work on the automotive side of things these days .
I’m not all that knowledgeable where the Luftwaffe is concerned. The colors on the Dora are RLM 76 for lower fuselage/ upper wing and RLM 81 on upper fuselage, upper wing and for some reason the forward half of the wing on the underside . The rear half of the wing and flaps are natural metal.The instructions say they have a theory on why this was done but they do not say what that theory is . I can understand the bare metal from a lack of supply standpoint as this was 1945 but I am clueless about the use of a dark upper surface color on half the underside of the wing - I even posted a request for explanation here on Kitmaker but got no response.
Maybe you have some insight on this ?
Regarding the RLM 76 ( grey /blue ) it is my understanding that this is the later underside color, the earlier one being RLM 65 Helleblau ( light blue)
but I may be wrong about that .
Here is a shot of the color guide for the underside.
I would take a picture of the model but the antenna wires are too fragile to turn it over … 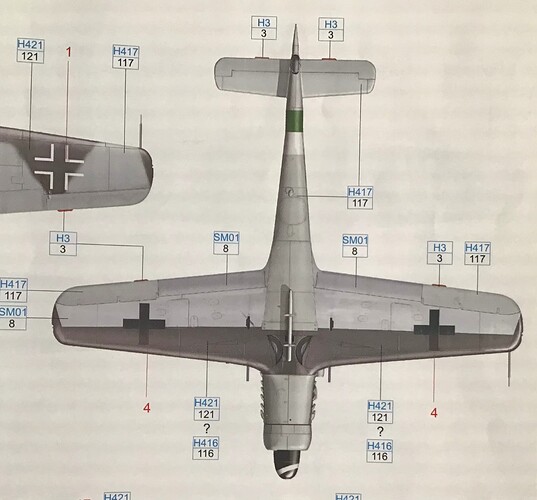 image1920×1785 142 KB
The Eduard Dora kit is nice and recently re released - just be aware of the fit issues with the panels that are meant to be open if you close them up.
Happy New Year - maybe I’ll see you at MosquitoCon in April-
Cheers- Richard
2 Likes