Lots of photos for reference at this link in the drop down menu on the right side of the page. Most are B&W, but there are a few color ones as well.

Angel what do you mean by gun mask?

The armored protection of the gun: 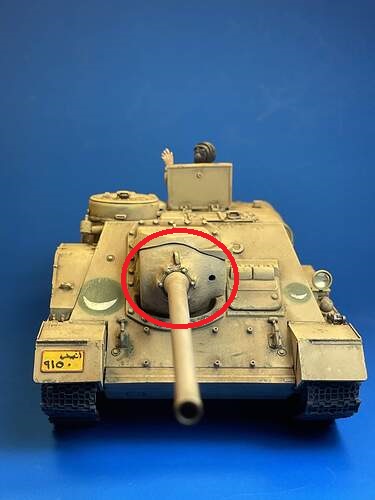 The Soviet one has rounder edges on the part, where the coaxial MG opening is, while the Czech one is bit more rectangular.
Your vehicle has the Czech gun mask,

Re the uniforms: it would seem that the Denison smocks were worn over what were known as Khaki Drill (KD) uniform. Steel helmets painted sand, DZ patches applied as per the norm. Certainly, this is how a figure is represented in the Osprey Vanguard book “British Infantry Equipments 1908-80” (which also includes details of the ’44 Pat webbing mentioned). The same image is shown on the front cover: 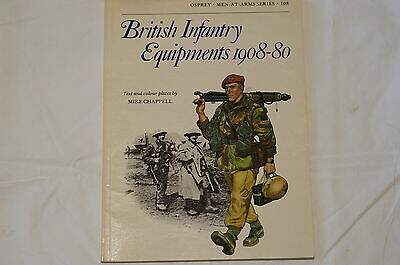 However, I note that from the photos referred to in the link to the Para Data site that several figures look like they’re wearing the Overall Green (OG) tropical trousers, or possible the Khaki Battledress trousers. I think if I was undertaking a diorama, I’d go for them all in the same kit; it might be simpler(!)

The webbing shouldn’t be too difficult to replicate. The ammo pouches are practically the same, the belt will just about, in 1:35 look similar. You’ll have to add a waterbottle or modify a US pattern. The complicated double straps on the rear will probably not have to be modelled in their entirety as if you depict the pack, the straps will not all be seen. I haven’t been able to find a one-stop-shop type site to cover it all but this video might help.

The pack should be easy enough to convert from a 37 one I would’ve thought; Milliput could be your friend here. A sleeping bag or cape/groundsheet was normally added beneath; easy enough from Milliput.

The webbing itself had a bluey-green tinge to it although this would soon fade. I was issued this in 1982 whilst in Belize. I must just add feel free to Google away to find whatever you need - this little extract is not as finite as it should be and I’ve worn the stuff (!)

As I’m sure you’re aware weapons were still those of the WW2 era: Lee-Enfield, Bren, and Sten – though the latter was the jazzed up version with wooden furniture.

Wow Brian, thanks for the wealth of information here about the uniforms! I will have to check the figures I have and see what , if any modifications have to be made. I’ve looked at the photos of this battle over and over including film, some of them in color and yes some appear to be wearing the overall green and I did notice a black and white picture taken inside an airplane where they appear to be wearing sand ( khaki) colored trousers. But it could just be the lighting from the camera. I will be putting a few Paras on maroon berets as I have seen in some pics, even during combat. There’s a famous picture of a company commander I believe walking off the drop zone with his beret in- forgot his name.

The figure on the cover of that osprey book is just what I’m looking for btw.

Richard, glad to be of some help; whilst Googling “Paras - Op MUSKETEER” I came up with quite a few images including these: 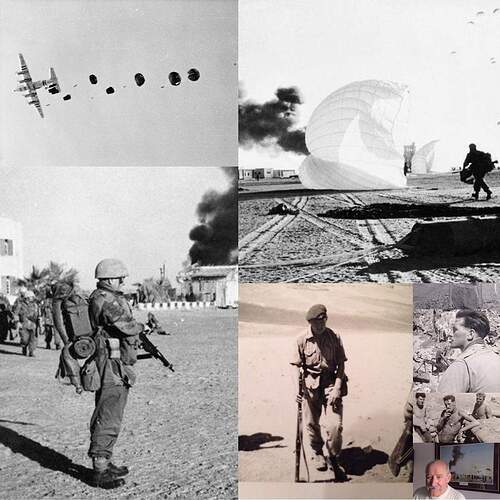 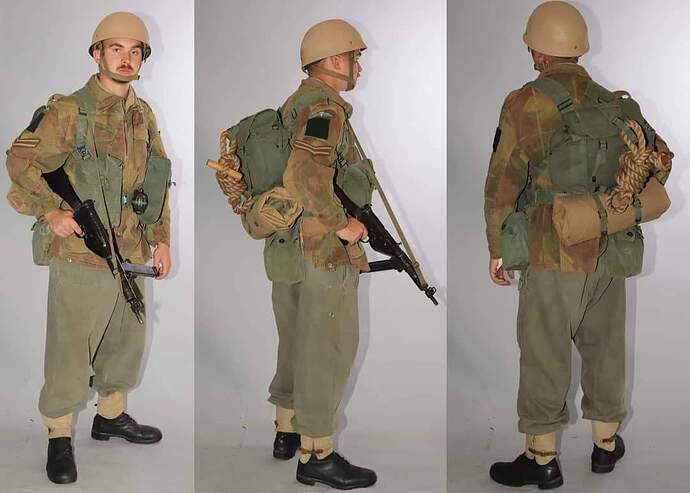 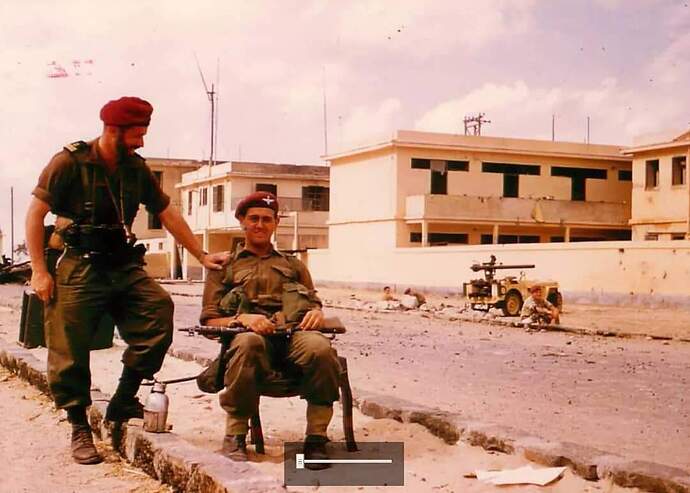 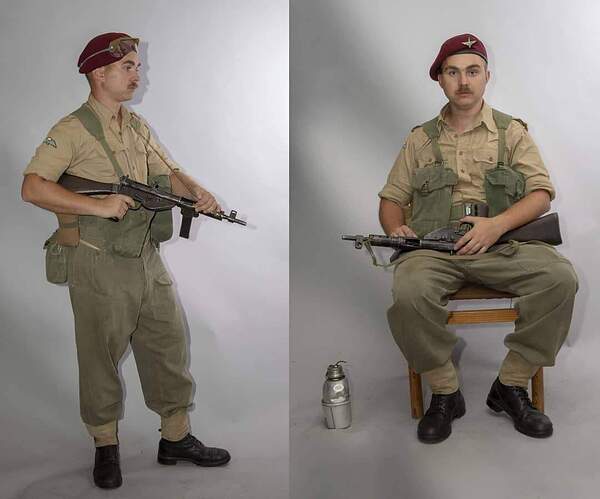 which might help a bit more; note that the Paras (and other users of the 44 Pat) used the rifle securing strap (a short press-studded affair to secure the rilfe when slung and marching) to fix a field dressing in place on the right hip.

Brian thanks again for your help. Many of these pictures are the ones I’ve been looking at for a while but the color plates are a huge help. I have to look at the figures I have to see what they’re wearing, most if not all the resin or plastic figures out there are of WW2 Paras but I’ll see if I can modify them. I wasn’t looking for 100% accuracy; close enough is good enough.

The picture of the Jeep in the background shows the 106mm RR in black ( parkerized?? ) finish. I’m sure I’ve seen film with the RR painted sand as well as the steering wheel. I’m looking to add more interest to the scene by using different colors; might seem trivial but these are the details I’m looking for. I’ll try to post pics of the Jeep in progress today.

Richard, I take your point; I don’t think the Paras will need that many mods - different backpacks, a new waterbottle, perhaps a few details on the equipment but once you get going - I’d suggest a sort of mini-production line (or at least that’s how I try and adapt mine) might be beneficial - it shouldn’t be too much of a problem. I think the paint job will be crucial and tell the story. The sand-painted helmets/Red berets will tell the story nicely, together with perhaps the KD or OG trousers (I’d probably be inclined not to mix 'n match; I suspect at say, sub-unit level the boys would all be wearing the same. The beauty perhaps of using WW2 figures is that if the ammo pouches are moulded on it doesn’t matter as they’re the same height as 44 pat. Small packs - as discussed should be an easy enough fix. Waterbottles also as discussed, weaponry the same - job done!

I think the Jury will remain out on this one; see also - again from Para Data:

I remember seeing one as a kid at an Army display somewhere, probably Tidworth Tattoo in the early 60s, and am pretty sure it was that sort of dull greyish black finish. However, we all know that if soldiers feel something could compromise them concealment-wise, then they have a habit of painting it. The only possilble impact on any such idea will be from the Chain of Command who will either commend the boys for their tactical acumen, or refuse it in the interests of looking “smart”.

I’m probably muddying the waters here (as usual) but for instance, 1 PARA at Suez might have their M40s overpainted sand (or even green), whereas one of the other battalions might go with the Parkerised finish. What I feel is unlikely is any mix 'n match, as mentioned before re clothing. That said, happy enough to be corrected.

Any idea if the jeep would be a M38 type or an older Willys WWII era type?

Are you sure the Jeeps aren’t French? All the photos I recall of Suez show the British troops using Austin Champs. It was their big show, including the recoilless rifle carriers. BTW the trousers are the old OD Lightweight trousers I think. I had a pair when I was in the cadets!

The Jeeps were legacy issues from WW2 I believe; by the time the M38/M38A1 came on the scene we’d gone down the route of developing the Austin Champ (which was also fitted with the M40). I believe the Champ was available for the Suez op but am less sure if it was fitted with the M40 in time for Musketeer. It may all have come down to airportability/transportation/droppable criteria. Regrettably there was an awful lot of skillfade by the time Suez came around; all the skills and experience of combined ops including amphibious ops developed in WW2 seemed to have evaporated.

I’m almost positive the Paras used them in Op Musketeer. The French had them too but they were a little different I think in that they had a slot cut out of the wind shield to account for the M40. They are mentioned in the Osprey book I have briefly; I think one was credited with destroying an SU-100, the rest were taken out by British and French air and artillery strikes. Not 100% sure about this because I stopped my research about a year ago for this project to do others. Also, I remember seeing video of them being off loaded at a port, and Austin Champs waiting to be loaded back onto ships for transport elsewhere at the end of the operation. I will try to confirm this info when I get a chance.

Correct, the M38s were not used in the Suez

Lt Col. Paul Crook is in the photo (having just landed on the drop zone ) at Gamil airfield with his beret on. Also there is another picture of Paras uncrating a Jeep that was part of the heavy drop. It’s a WW2 Willys in sand color. There are a few more pics with the Jeep’s, some with the RR mounted, some without. There’s one hidden behind dome Paras with just the travel lock showing in front of the dash board on the passenger side.

Just thought of something, if there’s anyone who can dig up photos that no one has seen yet , who better than Frenchy??

Speaking of the Paras personal kit, I looked at the collection of figures I have for the project and they all have the older ww2 packs (‘37 pattern?) water bottles so I will have to modify them or find replacements. Anyone know who makes the ‘44 pattern gear in either resin or plastic ? I have figures from Imperial Gallery, Black dog, Verlinden , Ultra cast and Warriors and I think a Tamiya set that came with two mini motorcycles.