This twenty-four year old DML T-34-85 was the second oldest of my vintage collection of kits on the Shelf of Shame. Finally, after a long time this T-34 goes to the display shelf! Very happy it’s completed 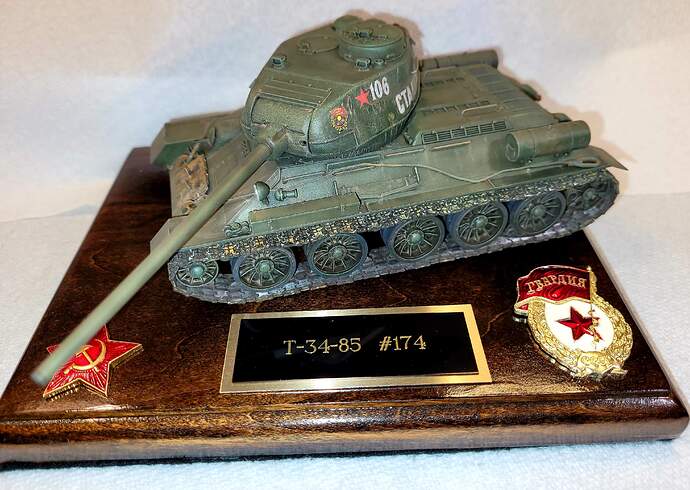 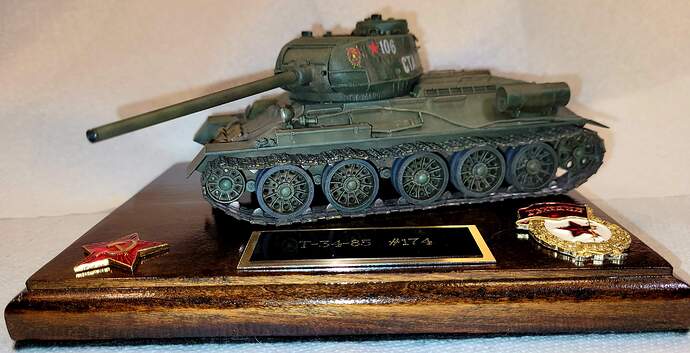 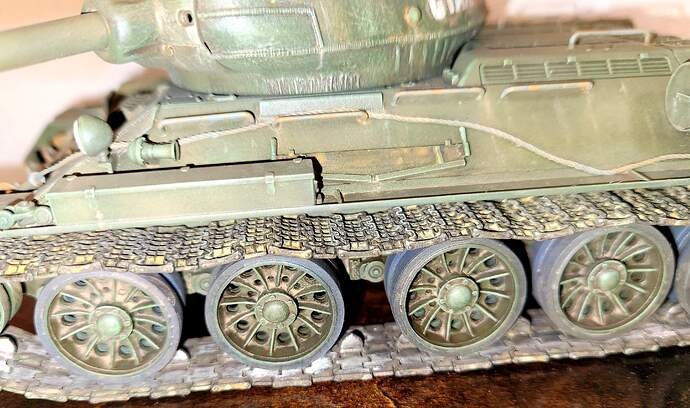 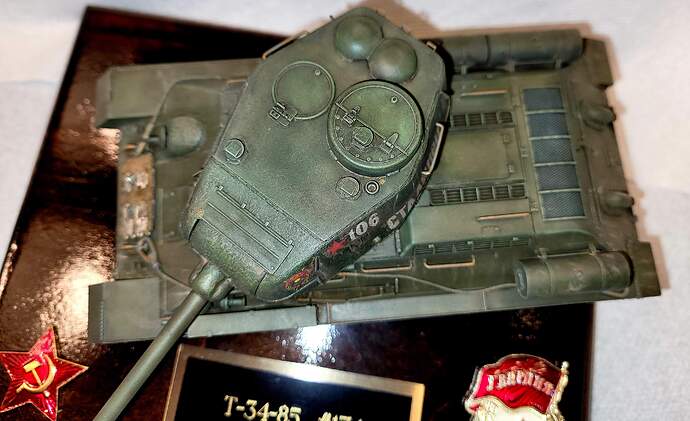 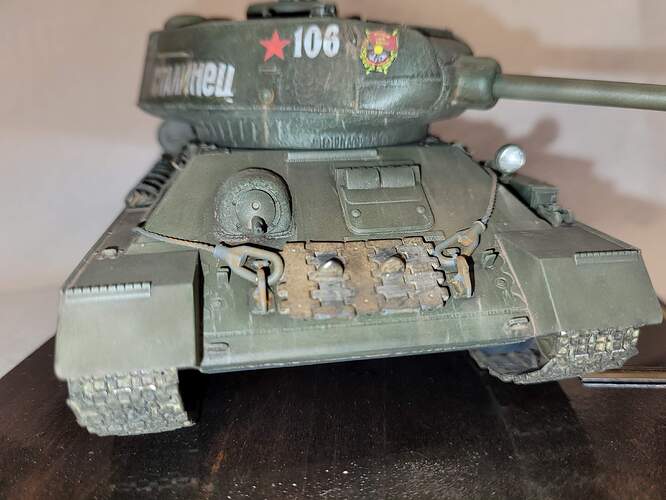 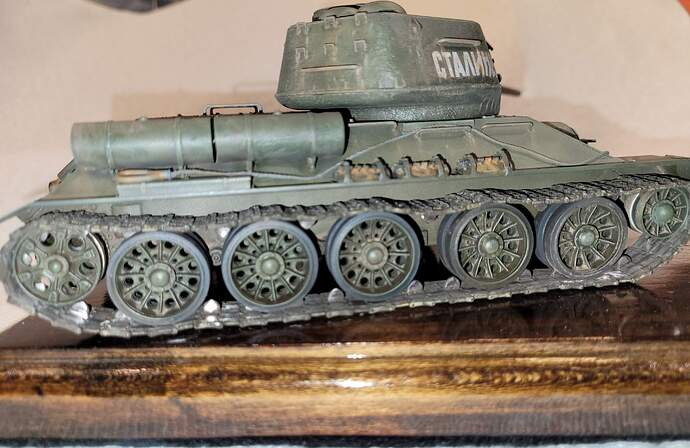 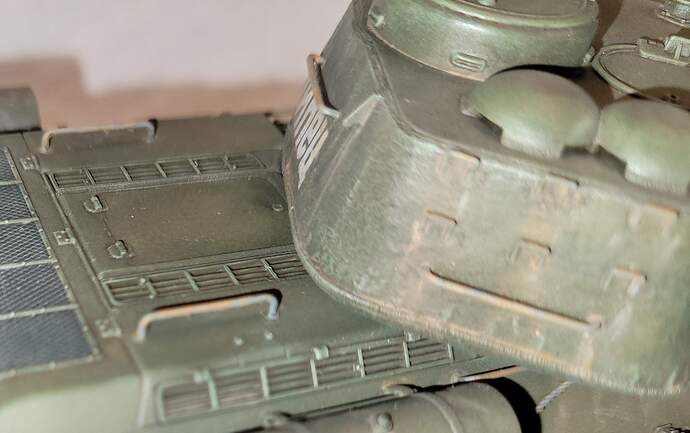 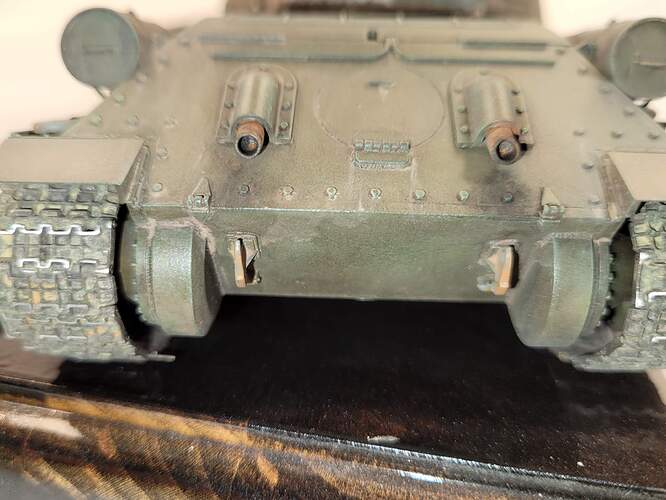 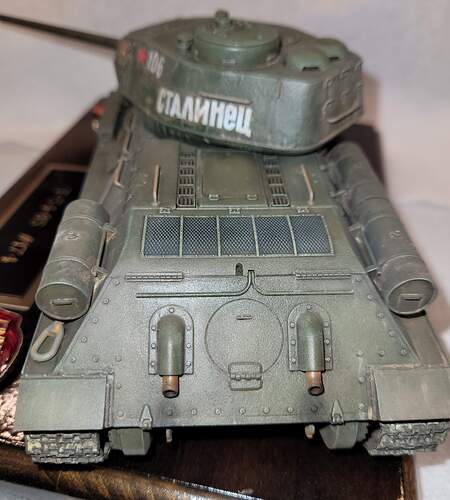 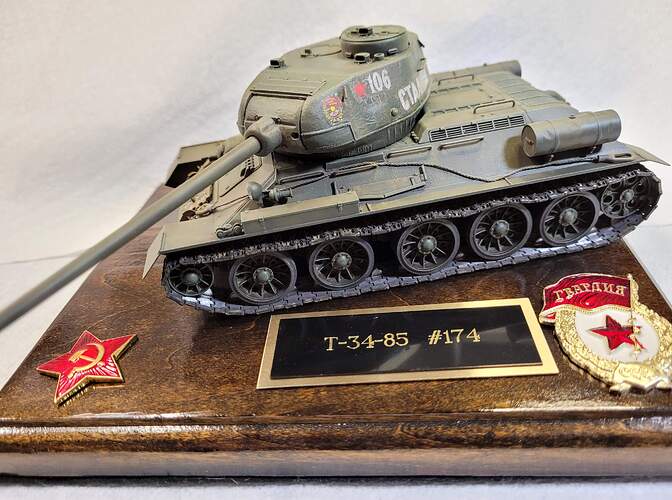 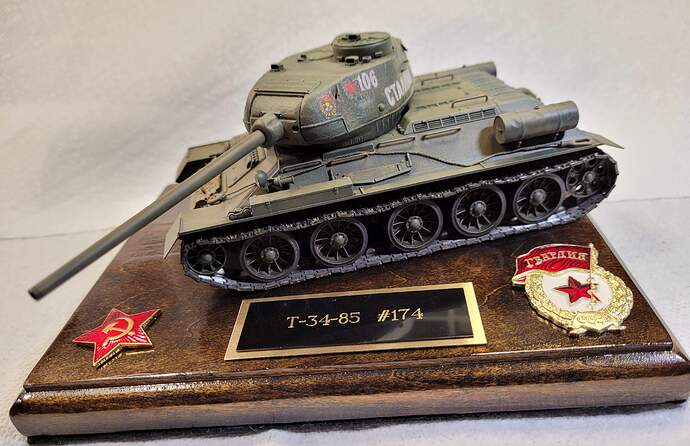 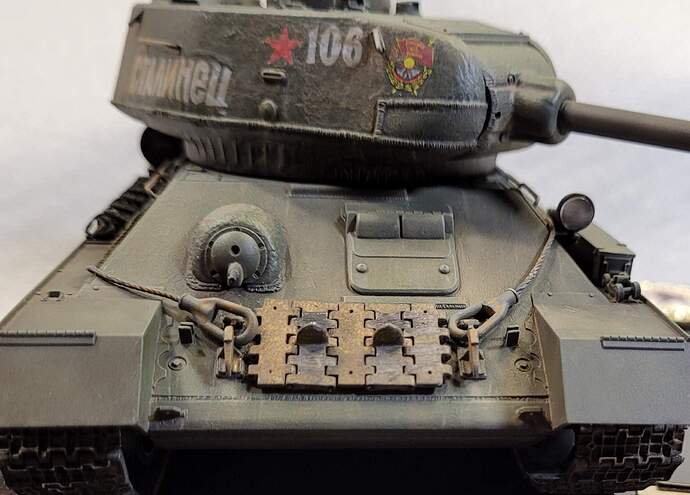 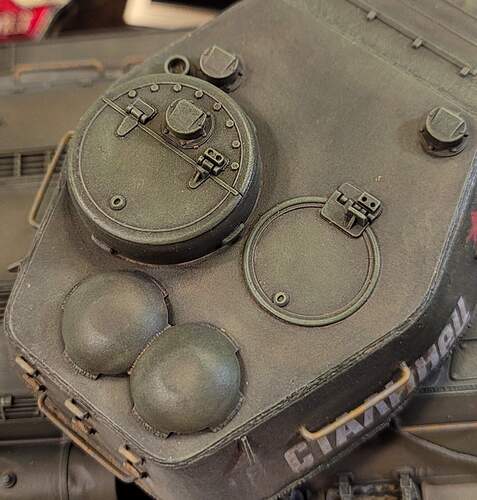 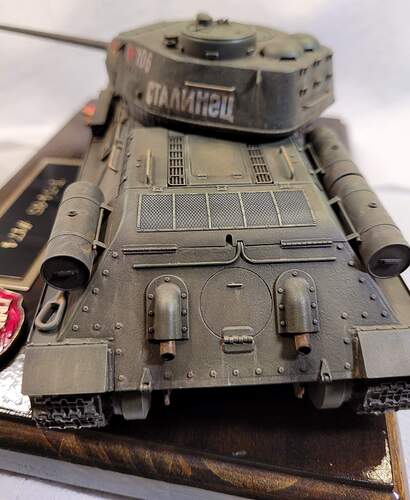 Briefly, the project started with great enthusiasm 1997 just after the kit released. Planned as an Out of The Box build, it hit an iceberg almost immediately. Between each spoke of spider wheels a badly distorted sink mark appeared. The ~120 sink marks proved impossible for me to fix to a satisfactory standard. A friend offered to trade wheels but his DML kit had exactly the same issue.

Shelved until 1999 when I learned Chesapeake Model Designs made a set of T-34-85 resin spider wheels. The model went back on the bench and the new wheels fit after drilling for larger DML suspension arms. Since the model wasn’t an OOB anymore the hull received extra details and a set of Fruil tracks. My interest shifted to the car hobby and model went back on the shelf.

In 2012 when I returned to the hobby briefly, pulled the old T-34-85 off the shelf as an easy project to complete

The build went without a hitch. Previously, I’d always force cured painted models under a very warm lamp. This allowed applying harsh lighter fluid washes directly to the paint very quickly. Out of practice, I got the light too close, five minutes later the top of the hull sagged then poured into the lower hull, literally like liquid plastic. The turret under the same light remained unharmed.

Many swear words were said at a high volume as I pitched the hull in the trash minus turret, wheels & tracks. Model went back on the shelf. I picked up a new kit for the hull but lost interest again.

In late 2019, the new hull was completed without detailing. After painting in late 2020, I noticed seams on all three fuel tanks

Back to the shelf

Early 2021, the seams were patched with Mr Surfacer & repainted. Of course, the decals disappeared at some point over the last twenty some years. I foolishly picked a sheet of Peddinghaus decals due markings choice despite all the warnings about the decal film. Easily the very worst decal film I’ve worked with on a model. Thick and nearly impervious to SolvaSet. I gave up after a dozen applications of SolvaSet. Micro-Set & Micro-Sol completely a joke facing something like depleted uranium armored decal film.

One last hurdle, was four wheels sheered off of the model on the left side attaching the track. The whole suspension arm just snapped. In all likelihood, I’d overstressed them fitting the resin wheels. Four wheels reattached and one promptly snapped flush at the axle

After the model was attached to the base, I discovered two sets of original DML T-34-85 in a small box with a couple of spare parts.

This gif sums up the build experience:)

Bravo on finishing it. Did you get replacement wheels or remove all those sink marks?

I tried to fix the sink marks and failed. Too hard to do so many on a curved surface.

A friend offered to swap wheels but his first production run kit likeine had the same wheel sink mark issue. I’ve seen kits produced later that didn’t have the issue.

Later, I found a set of Chesapeake Model Designs T-34-85 wheels for Tamiya’s old T-34-85 that could be adapted.

Well done Wade, another one finished… And after 2r years that has held pretty well to my eye. Lovely finishing on it. Looks great on the display base as well.

Excellent job! Sounds like this one gave you a run for your money but you triumphed in the end.

I appreciate everyone taking time to look and comment.

@Johnnych01 John, thank you. This one didn’t seem to want to cross the finish line.

. That 27 year old Pz IV J is going to get wrapped soon to prove the new title is for real…wink.

I found one of the sink marked road wheels. My photo my not do the sink mark justice. Used a filter to help make the picture resemble the part more accurately under normal light. 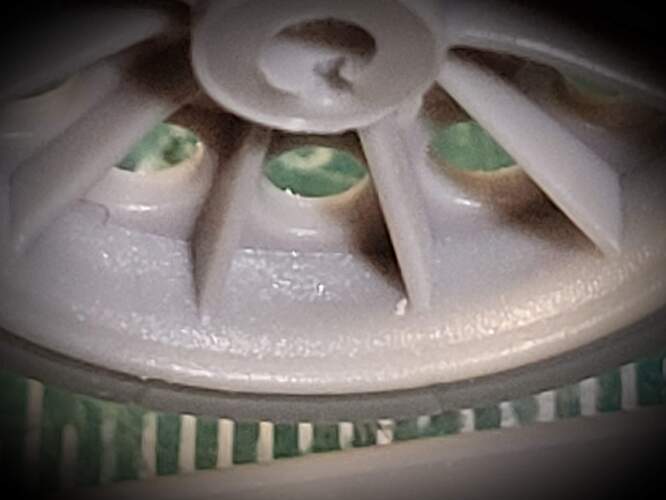 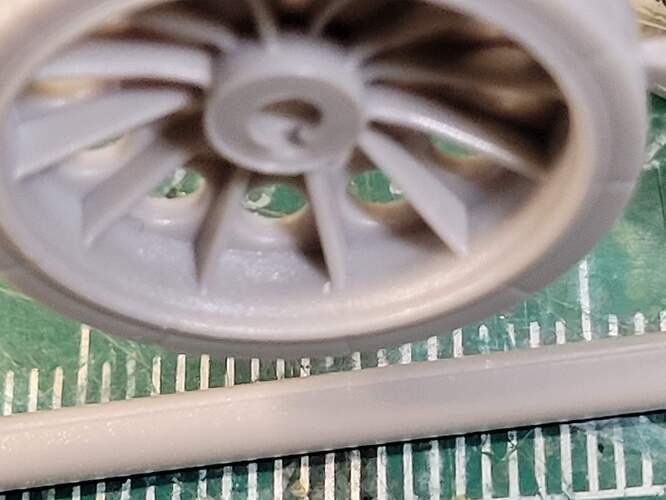 As Emperor, your orb will be a bottle of Tamiya Extra Thin Quick Setting, and you scepter shall be a feather duster…

Matt, Tamiya Extra Thin Quick Settings shall be the Official Imperial liquid cement, all other LC’s will have to have a tax stamp or be subject to seizure! 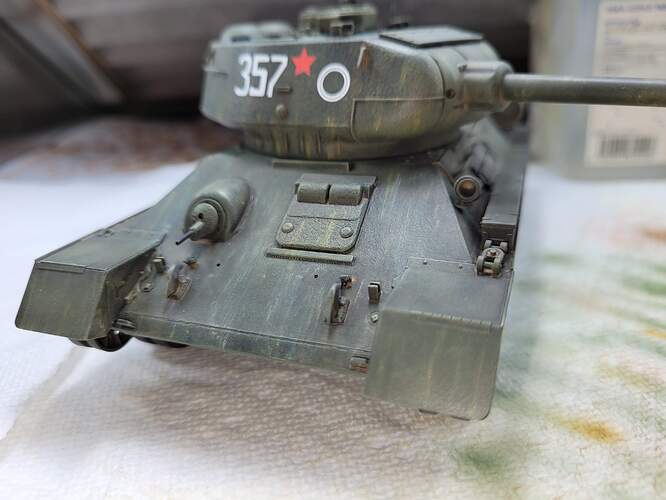 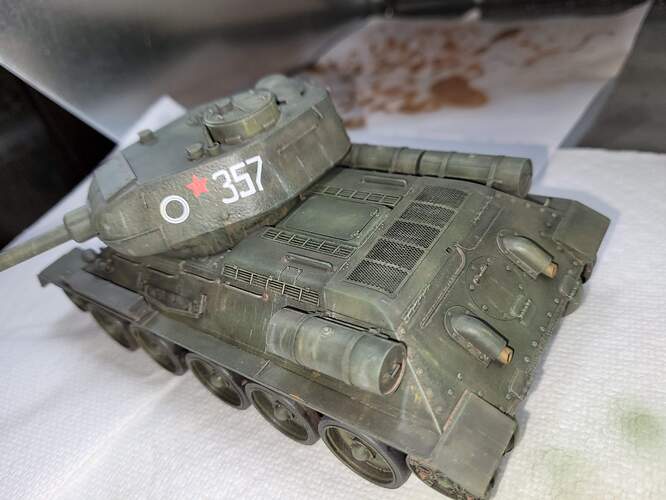 is this the same as the dragon north vietnamwar army tank that they made during the mid 1990’s? 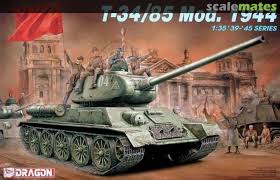 Scalemates says the NVA T-34/85M Dragon | No. 3318 wad a rebox of #6066 with unknown changes if any. I think the decal sheet is different not sure if anything else changed.

Congrats on finishing a shelfqueen! This reminds me that I have a 50% finished T-34/85 with bedspring armor by Dragon lying around in my stash for several years now. I really ought to finish it hehe

James, definitely pull that bad boy off the shelf and finish! I always enjoy seeing another shelf queen completed.