I am building Tristars flak panzer IA, I like the kit but the painting instructions are super vague. I know panzer were generally ivory inside in the time period these existed but what adds to my confusion is the following.

Any help would be appreciated!

The interior of open-compartment vehicles like the flak panzers was generally the same as the exterior. Now, if the vehicle was originally gray and was later repainted in Dunkelgelb sometimes the interior was left gray. In the case of a vehicle where the driver’s position was partially exposed the ivory color would usually be left in the areas not visible from above. You see this in troop carriers like the SdKfz 251 where the driver’s spot is in ivory but the passenger area right behind him is painted whatever the exterior color is. It’s also harder to paint that area since you would have to cover gauge faces, the radio gear, and other stuff that shouldn’t be painted.

So, if it was me I would paint inside where the driver is ivory, and the rest of the ‘interior’ behind that is open to the sky I would paint gray.

Thanks the make sense. The flak panzer is somewhat more complex in that there is a narrow slit between the back deck the flak 38 was mounted on and the forward part housing the transmission and such. Am I to assume that only the parts exposed in the slit would be gray?

This picture shows the narrow slit 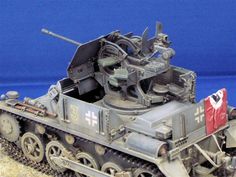 If I was doing it, I probably would do this:

Leave the area up under the horizontal panel just in front of the gunshield in ivory and everything forward of that as well. This will be the ‘interior’.

If the gun was removed, everything at the level and above of the deck it was mounted on I would paint in my exterior color, so the panels with the Balkenkreuz for sure, likely the side panels with the viewports, and the vertical piece going across the front as all of those are potentially visible by someone on the ground if looking from a rear quarter.

The dark space down in the hole is what I would leave ivory as the driver will appreciate it. I know it might seem like the panel in front of his face should be exterior since it could be seen from behind, but it would be blocked by the gun as well as being shaded by the surrounding panels so keeping it light for the sake of the driver won’t affect detection.

If it makes any sense, what I try to do is imagine myself looking at a kit as if I was the same scale, and try to imagine where I could reach with a brush or sprayer standing at various locations and on different items (ladders, the hull, scaffold, etc). I also do the same when imagining it at a distance, and what would be visible to an enemy observer, stuff like that. Using figures I estimated a man at that size could swing a sprayer any direction at a 30mm/1.25 inch radius. Think about what he could really reach. I just recently did that when my wife bought me Trumpeter’s SdKfz 7/2 with the SdAnh 52 trailer. I sat there for about 15 minutes looking at the trailer paint guide and planned out all the places I would stand and how I would move my sprayer if I was doing it in real life. I just move the figure around and plan. Then when I paint, I load up some very thin paint and come in close and try to mimic the movements I planned but at 1/35 scale. You have to thin the paint down and lower the pressure to avoid flooding the surface when you bring in the airbrush close like that. Takes a few passes to build up the color but that is actually a plus in my opinion as it gives the secondary camo colors (generally red-brown and green for me as I only build WWII German armor) kind of an ‘in the field application’ look that reminds me of many of the photos I’ve seen. And it avoids those weird artist renderings where a stripe goes unbroken from one side to another across a large tank. Unless it was a factory paint job where they had proper equipment and scaffolding to provide access to all parts of the vehicle, no guy out in the Ardennes is carefully scrambling across a Tiger II hull and turret to maintain a seamless Olivgrun stripe so everything lines up perfect when the gun is locked.

Fantastic thanks for the detailed reply. That makes sense to me. I was thinking everything the hole should be ivory too except for the panel with the view ports about the horizontal gun deck. I just wasn’t sure about the floor and walls in the hole. What you describe makes sense

I concur, only thing I would add is that it was normal practice to paint the inside of the hatches the same as the external colour, so they wouldn’t stand out when open. In fact they still would, as naturally being inside they wouldn’t fade from UV or dust and grime.

Was this also true of the vision ports since they wouldnt open fully like a hatch, and when open the part that was in the vehicle tends to point down.

Not the visor ports; as you say they basically face downward when open anyway and if a Russian with a mine can see that visor interior he likely sees the tank anyway.

Yes. There may be some exceptions but usually tankers would do so as they often ran with hatches open for ventilation.

And of course a large ivory rectangle on the side of your turret ends up being a problem.

I have one picture that shows the inside top of the front hull extension (the part just forward of the gun shield) painted grey and just by eyeball that would be just about as far back as the gearshift lever. I would tend to do the interior gray although not much or it will be seen.

I’ve painted the interior base but a couple more questions cropped up. Would these anti slip plates be elfenbein or left in a bare steel color? I am leaning towards bare steel. 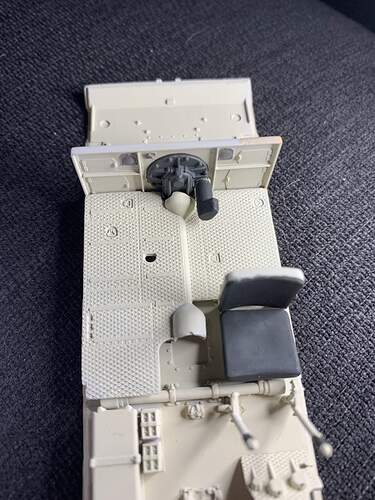 Second I am wondering what these three parts are and what color they should be. I think the two smaller ones are batteries so maybe black? The other I have no idea 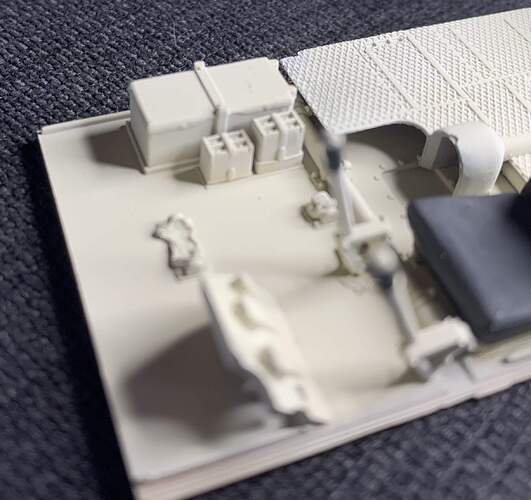 On the restored Ausf A gun tank in Munster the floor is worn elfenbein. The large box would be the battery cover in the gun tank but on the Flakpanzer I ausf A there was a seat for the loader in that position and I have no idea if the battery was still there.

From Wikipedia is appears the radio batteries shouldn’t be there. “To save space the radio was dismounted and hand signals used to communicate”

No radio → no radio batteries being there. It also makes mention that ammo was stored under the drivers seat and behind the loader. So I imagine the radio batteries should be exchanged for a seat