Can anybody confirm/deny the correctness of this track for the other vehicles listed on the box? The one that concerns me most is that they list it as being T-54 Model 1949 track. However, the track shown on the box is quite clearly the “narrow RMSh”-style track, which from the Kinnear/Sewell book, appears to be correct for a T-54 Model 1947, while the T-54 Model 1949 was the first to carry the wider 580mm OMSh track. So I’m thinking that if I want to go with aftermarket track for my T-44M and T-54-1, I need to get the Friul T-44 track, while if I want aftermarket track for the T-54-2, I should be going with ye olde original T-54/55/62 ATL-01 track from Friul.

Anybody know for certain? Have to say that, after picking up the Kindle versions of the Kinnear/Sewell books on the T-54 and T-55, I’m very pleased with both - great source of info, illustrations from manuals, and photos. I went through both constantly asking myself “Will they cover X?” and for almost everything on my list, they did. The only stuff that seemed to be missing was AT-T and derivatives.

FWIW, I think you’ve got it right about the evolution/transition of the track types.

It’s been a while since I cracked the books on the T-44/T-44M and initial production T-54s, but IIRC, the track change on the T-44 actually came with the introduction of the T-54 whereas the T-44 was updated with the newer, short pitch tracks and sprockets as part of the T-44M program. So, the emphasis on the track is really with the introduction of the T-54, and the T-44M track is an upgrade byproduct.

As far as I recall, there were no new manufactured T-44M only ever original manufactured T-44 that were upgraded to the T-44M standard (which was somewhat variable in detail over the years).

My impression was that with the T-44M the track upgrade was an attempt to improve its automotive performance to equal the newer T-54, and the exact type of T-55/55 track that was installed on a T-44M depended on when that upgrade took place. In the very end, a number of T-44 hulls were actually cut apart and rebuilt with the entire T-54/55 suspension from the torsion bars on up, to include engines and transmissions to create a turretless tank recovery version (which was nearly identical the the same vehicle based on the T-54/55 hull, differing only in some very hard to ID details).

Also, as with many (most?) T-44/54/55 tanks in Soviet service, as the vehicles aged during their service, high-wear parts like tracks, road wheels and drive sprockets were continually replaced with the latest available versions in their supply chain.

(Which is, of course, a digression from your initial question. However, I still believe you’re correct in your interpretation, and the track and wheel changes / upgrades made later doesn’t effect that.)

For a “plane Jane” T-44, the aftermarket tracks would be one of the waffle track sets probably marketed for the T-34. FWIW, I used Spade Ace T-34 tracks on my own T-44 build.

Yes, I’ve got a set of Friul T-34 tracks set aside for my “vanilla” T-44. The story of T-54 tracks, at least as far as I can make it out from the Kinnear/Sewell books, has the very first T-54 prototype, in 1945, having T-34 tracks with the roller sprocket, same as the T-34. This was followed by the Model 1946/7, which looks from the photos in the book to have 500mm RMSh-like tracks, with the ends of the track going between the sprocket teeth, then the tracks introduced on the T-54-2 in 1949 were essentially the same, but extended at the ends to 580mm, which closed the inter-link gaps and turned them into guide holes for the sprocket teeth, to reduce the likelihood of tracks being thrown.

There were also, it seems, several idler changes during the T-54/55 lifespan, mainly making them wider to reduce the likelihood of thrown tracks. The sprockets did change from 13 tooth to 14 tooth at some point, but I’m not to clear on whether that happened when the RMSh tracks were introduced in the 70s, and whether it was applied to older vehicles during refits (the fit of RMSh tracks on a lot of vehicles seems to be a bit rough, which would be explained by sticking with the old sprockets).

I have to admit I’m a little puzzled as to why the T-44M ended up with the tracks that it did - the T-44M upgrade happened in the early 60s, and the dimensions of the tracks suggest it should have been able to take OMSh track. The track from the T-54-1 was ancient history at that time - the only thing I can think of is that a lot of older T-54s got upgraded to OMSh track at the same time, and the T-44Ms were seen as a way to use up surplus stock of the older track.

Out of curiosity, have you been able to find a reliable way to burnish Spade Ace track? Maybe it’s just because most of the sets I’ve got are rather old - from 2012 or 2013 - but I found that some of the sets I’d built just didn’t react to any track burnishing fluid, and I ended up either using heavy dark washes on the bare metal, or priming and using a track color paint, although in the latter case it was less to do with the track metal not reacting, and more to do with the fact that I was building Maus tracks, and a set of those would need about lots of burnishing fluid

The actual result is somewhat variable from one set of tracks to the next even within the brand lines. However, it generally turns the tracks a dull, brownish black in all cases.

BTW, I can’t seem to notice any real difference between their “Super Blue” and their “Perma Blue” and have used both with the same general results.

It MAY help to pre-wash the track sets in a strong detergent like Simple Green before trying to chemically color them.

FWIW, here’s a shot of my T-44 tracks initially colored with Super Blue. I consider the chemical coloring to just be the first step in weathering tracks, though. 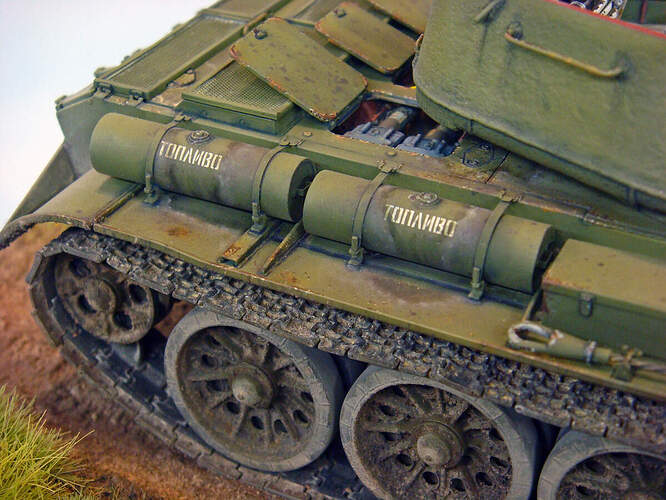