A Sturmpanzer IV of Stu.Pz.Abt. 216 pauses it’s advance as Combat Engineers with a Goliath remote-controlled demolition vehicle is deployed to clear mines and barbed wire in it’s path, Italy, 1944. 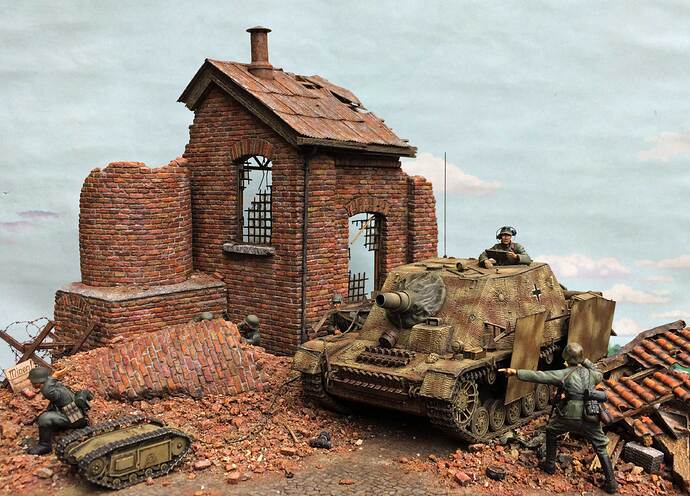 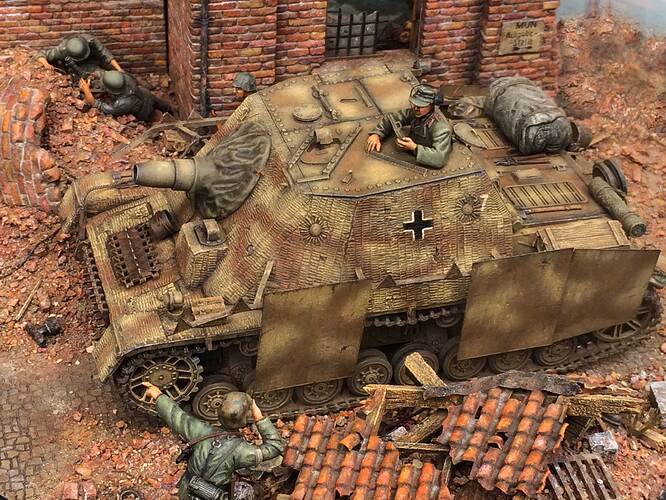 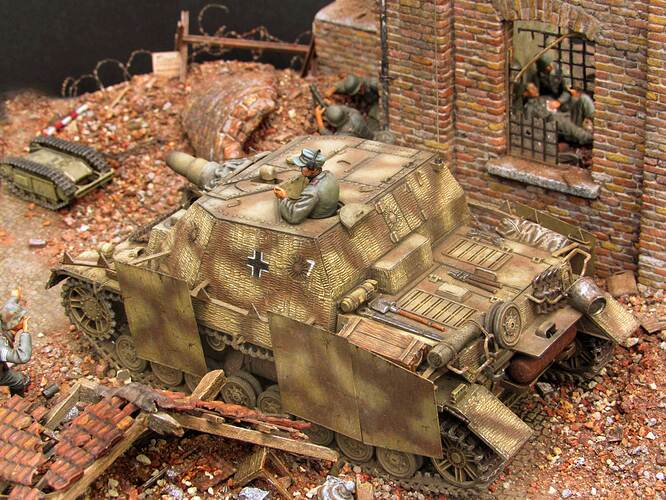 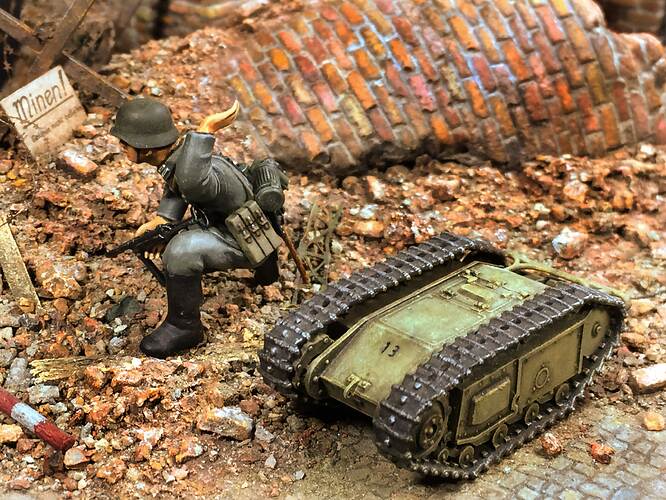 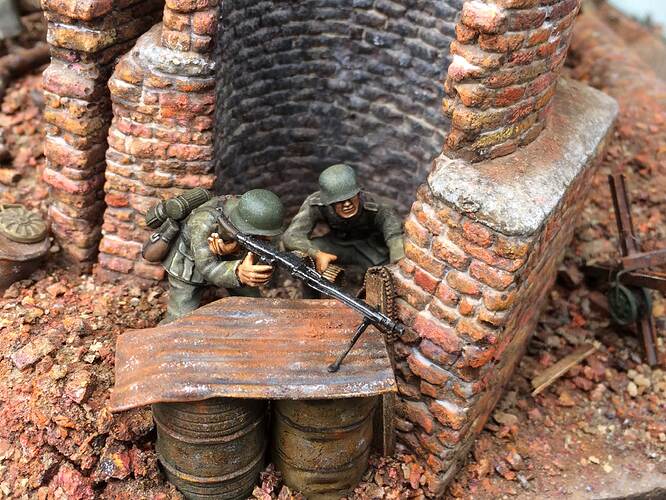 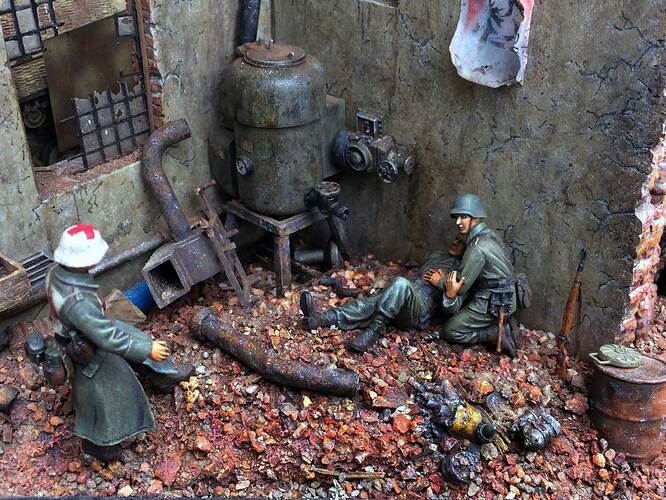 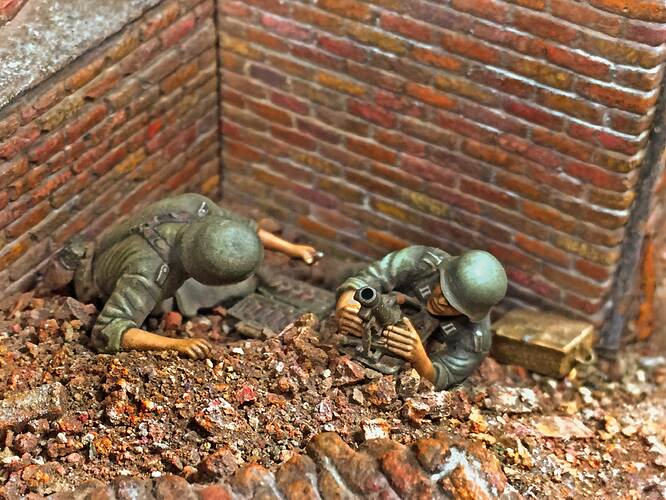 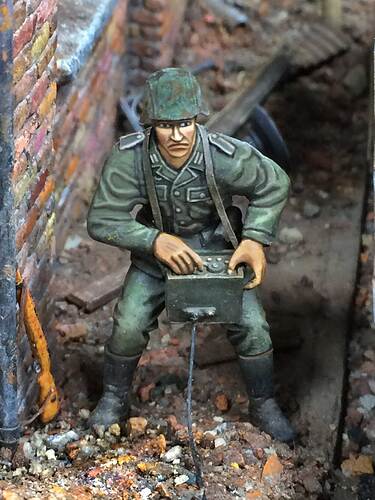 So much to see . How long did this take ? What aftermarket did you use?

Nothing really fancy here, in fact, a collection of dinosaurs. The Stupa is the Late Paleolithic age Tamiya kit, pretty much OOB, with the addition of Green Putty Zimmerit, a paper towel mantlet cover and scratch-built skirts. The factory ruin is a Verlinden piece, with bass wood framing and Evergreen corrugated sheet roof panels. Roof vent is a model RR bit. The Goliath is the old Esci kit, spruced-up with scratch guide teeth. Figures are a mixed bag of Tamiya and Dragon. Bit of PE window frames, Verlinden barbed wire and more model RR factory bits. The guy next to the Goliath is a recent addition, hence his absence in the proceeding photo.

Being partial disabled, including the ever-so-fun Carpel Tunnel syndrome, I build at a glacial pace, Several years transpire in the process, more off than on, plus countless hours tweaking things.

Heartwarming to see those ancient Tamiya machine gunners painted with such attention.

Really nice! So much going on everywhere…

Fantastic scene you’ve got there @paska. As @Mousemuffins mentioned it is great to see some older products painted and put together with such attention to detail. The uniform and skin painting on your figures is first class and the positioning creates a dynamic scene. Good to see some old Verlinden stuff these days too. I’m sure painting all those bricks probably drove you mad but the brilliant and numerous well observed red shades are a real credit to your dedication.

Really like this and second the views on the old figures. The painting really “pops” and reminds me a lot of Francois Verlindens work as featured in MM back in the '70s. We all aspired to that standard then!

No doubt, it is an extremely intuitive and superb done dio! All hours you spent are coming through the photos, congratulations for all efforts.

However I have to tell you how much nervous (?) or frightened I became when saw the very first bird-view pic as the almost all-red was exploding in my eyes. The similar shades (rust-orange, the camo on the vehicles etc…) just increased this feeleing. The other colors (the uniforms) could not balance out the impression.
If you wanted to excite the viewer ahowing the craziness of a war, than you DID got it!

However I have to tell you how much nervous (?) or frightened I became when saw the very first bird-view pic as the almost all-red was exploding in my eyes.

Thanks for pointing that out. This is more a product of my ham-fisted photo editing than my use of Cadmium Red, although I did use quite a bit. I went back and edited the third and fourth photos after looking at them again and you’re right. I ratcheted back the saturation and contrast, and hopefully they aren’t as garish as before. Given that the building was entirely brick, I struggled to find a way to add a complimentary color to the scene. This lead to a frenzy of color modulation of the bricks without any noticeable difference in the overall color balance. While there is a lot of red in this piece, it is actually rather drab in person. In my vain attempt to liven it up a bit, I stepped on the Photoshop contrast and saturation a bit too much.

I trend towards high contrast painting, perhaps too much so. As Hohenstaufen pointed out, the painting really “pops”, this is my intent, so I guess mission accomplished! I blame my old boss from when I used to build architectural models. He asserted that high contrast “caught the clients eye”, and thus was a good thing. While everything is under-painted in standard acrylic model paints, the top coats, dry brushing and washes are almost always done in oils, specifically for their high color saturation. I also “road map” everything, outlining everything with a .15 mm Pigma Micron pen in either black or sepia. Maybe I’m a bit too heavy handed with it all, I don’t know…I have a fair number of trophies that say I must be doing something right.

Thanks for viewing and everyone’s feedback.

Awesome piece of modelling, my friend

. The Brumbar is my favourite WW2 combat vehicle and you did a Great job on it

Reminds me of one of Shep Paines diorama sheets in the old Monogram kits. Good job.

An excellent work of art, a lively scene which certainly convey the rigours of war. A diorama that can serve as an inspiration.
Thank you for sharing yohr work