This falls in the murky area between VE-Day and the Cold War. Anybody know what the markings were for the M26s assigned to 1st Inf. during occupation duty in the late 40s? From what I glean they had 123 M26s assigned at Regt. level and the Div. tank Batt. Specificly interested in the bmper codes. I’m trying to come up with something different than the usual WW2 “field test” tanks and Korea.

Here’s a line of Pershings from the occupation period in Germany. But I really can’t make sense of the bumper codes for the higher unit, only that it’s from a tank company. 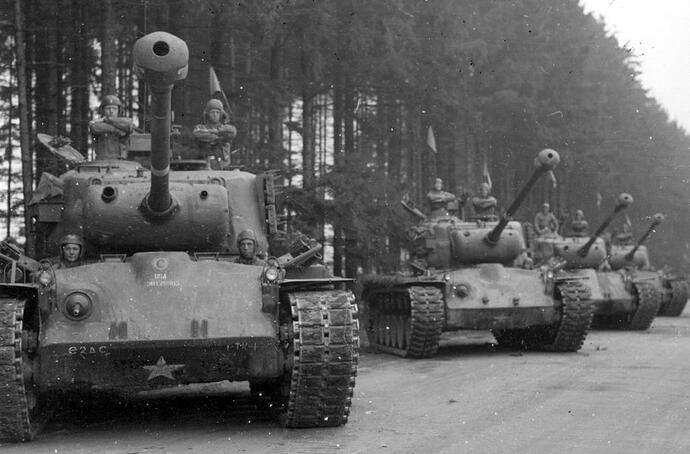 Great shot. As near as I can tell … TK 1 = Tank 1. Under the mg, looks like a C with lightning bolt … Constabulary. 2= 2nd Brigade or Regt. Triangle = Armored. C= Company. ??? Also looks like Constabulary’s C and lightning bolt above the s/n. I know the constabulary had M8 Greyhounds and M24s. Didnt think they had M26s.

What’s with the “I Dream of Jeanie” crossed arms on the crews?

Stumbled across this pic. Exercise Rainbow, FTX-50. Germany, 1950. Possibly 2nd Constabulary Brigade in the Hanau area. Only marking I can make out for sure is “HV TK 21” . Looks like something under the mg cover. Also might be something censored out between the driver’s hatches. 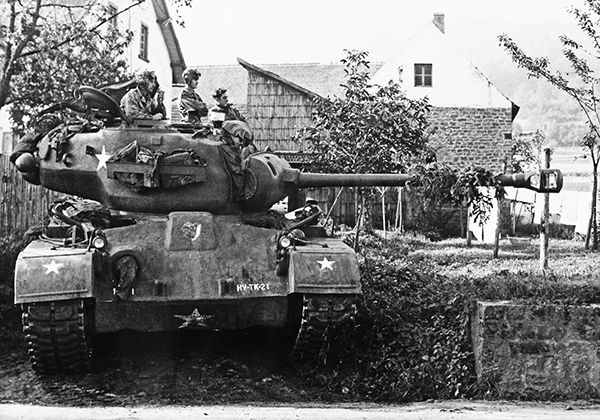 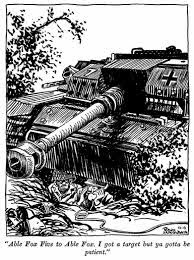 My eyes aren’t what they used to be so I had to go looking for a larger version of that image.
Here it is, in case someone else need their letters bigger than tiny … 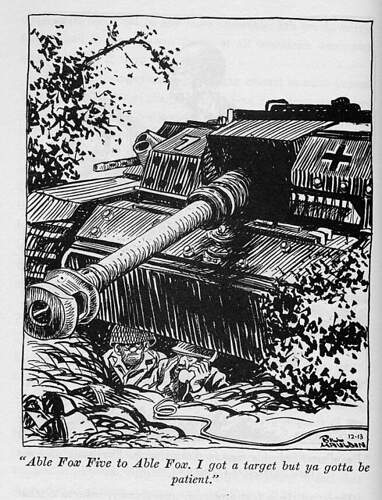 Thanks, Robin. I’m better with glue, paint, and plastic than cyber stuff …

Here’s another M26, crossing the Rhine on a pontoon bridge near Oppenheim, Germany, 20th March 1949.The bridge was built by the 1st Engineer Combat Battalion, United States Army Corps of Engineers, during a joint Franco-American excercise codenamed ‘Operation Essayons’ : 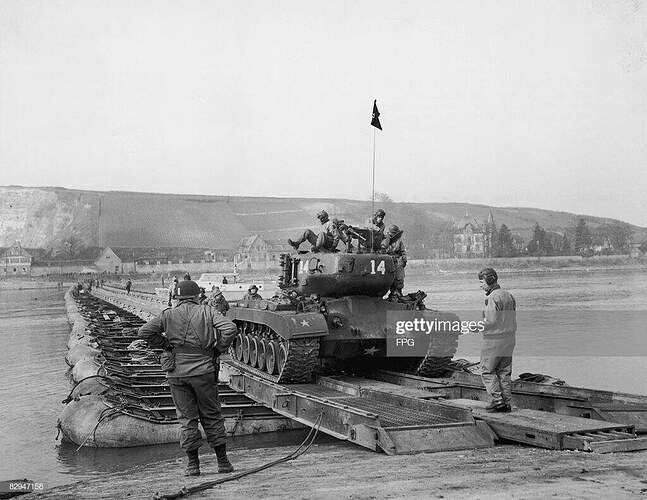 Guy with his back to the M2 looks like he has a 1st Inf. patch. (shape and dark color … OD with red 1) 1st ID was deployed to Germany as a fire brigade, to back up the Constabulary units, and had tank units at Regt(?) and Div. level. Also, nobody working that bridge has PFDs. OSHA is gonna have a cow!

I did river crossings in the 80s, didn’t have PFDs, in fact, it took me a minute to figure out what you meant.
Ken

1st ID was deployed to Germany as a fire brigade, to back up the Constabulary units, and had tank units at Regt(?) and Div. level.

Each Inf Regt had a tank company, and there was also a tank battalion, 63rd, attached to the division.

Military doesnt have OSHA either. (OSHA inspector at a place I worked said OSHA stands for “Oh shite, him again!”)

Military doesnt have OSHA either.

No they don’t.
Ken

Nowadays they have the infamous “safety brief” before anything and everything. Who needs OSHA when every leader has to do a risk assessment on every activity. That is in between all the online training classes for awareness, justice, assault, equity, etc.

A nice lady at the 1st Infantry’s museum was able to find a couple photos of M26s assigned to the 63d Heavy Tank Batt.,1st Inf. Div. when they were THE U.S. combat force in Germany. One shows the 1st ID emblem and “Armor” triangle loud and proud on the front. Left bumper code is obscured by the bow .30’s dust cover. Other side is the usual Co lettr and tank #. Second shows the bumper codes and small stars on the fenders. “14” , crossing the pontoon bridge in 49 would be about the right time frame. Put the puzzle pieces togethr … 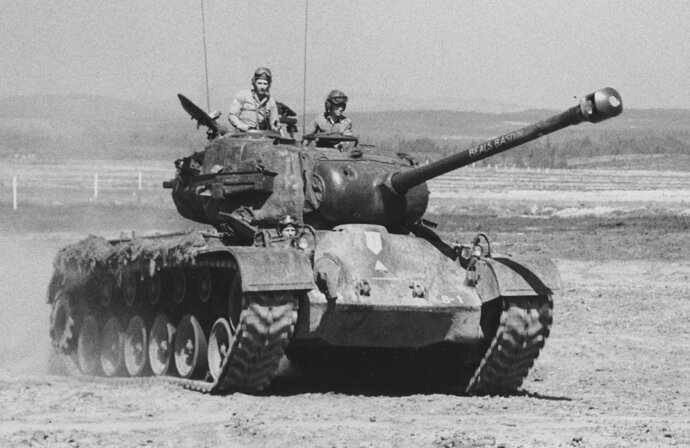 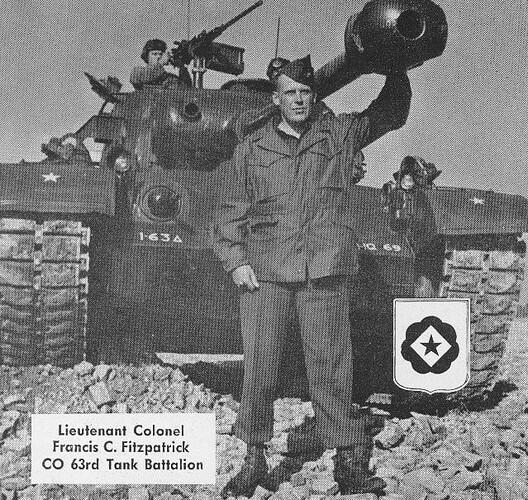 Not sure how these will come out , but … again, courtesy of Audra Kantor, 1st Inf. Museum. 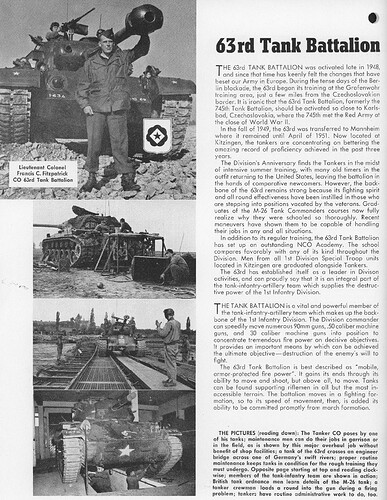 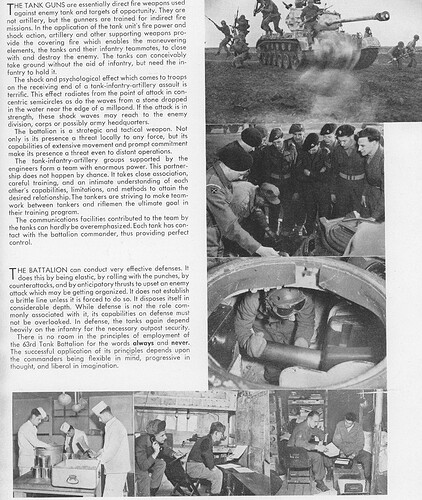