Hey all, thinking of taking my first dive into rotary wing and have eye in an apache, was wondering how the hasegawa ones build up

Hasegawa’s 1/48 Apaches are considered the best on the market. Good luck with them and show which one you choose here.

I built one back in 2010. Still have it on display, kit went together well and I enjoyed the whole thing. Here’s a link to the archived build, photo bucket logo annoyance included!

Thanks! I’ll check it out! I’ve wanted an Apache for a while. Love the look of it!

If its the same kit,dont know if its new tooled,but I remember building that kit back in the early 80’s should be fun.

That couldn’t be the same kit. Sure you’re not thinking about another?

That is the Monogram kit came out in 86. Hasegawa first started boxing the Apache in 2001.

Interesting enough the about 80% of a Eduard interior PE for the Hase kit will work on the Monogram. A club member was working on one yesterday and that’s what he used as he couldn’t find the Monogram PE from Eduard.

That one was first released in 2001. It’s had a few runs since as I recall for that boxing.

I haven’t found any kits of the AH-64E Guardian with the ice cream scoop exhausts in a long while. I Can only find the Taiwan version without the scoops.

Could be,I did just check Scalemates,I know I handpainted it before I bought an airbrush,which would put it in the 80’s,but obviously the Hasegawa didnt come out till later,so im just confused.

Well anyway,looking forward to it.

Yep, that was a limited run kit in 2015 and went fast. BAM models has a 3D printed set.

I don’t recall any other options off hand.

Nice to see Arnaud is looking at Helicopter after market now. Maybe we could convince him to do an update for the HIMARS? 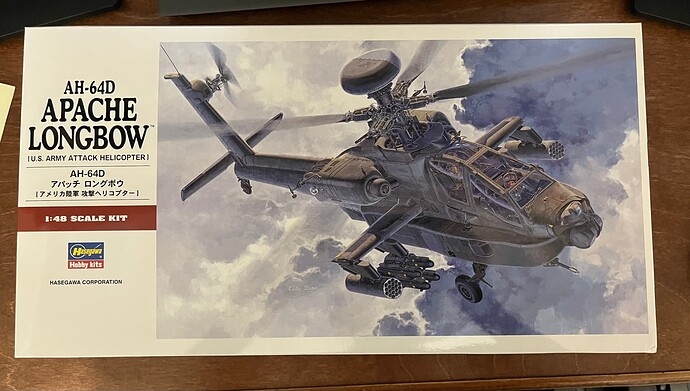 Haven’t had a chance to look at the contents yet other than the fueslage (not sure that’s correct for a helo). Man is this thing big in 1/48!

fueslage (not sure that’s correct for a helo)

I don’t recall any other term for it.

I built it back in 2002. I used the Aires cockpit which really dressed it up. I had painted it in helo drab and was decaling it when my ex-wife and I got into one of our many arguments. She then grabbed it and smashed it against a table, shattering it. Thank god she’s outta my life.