Is part C8 supposed to be cut off? The “loop” shows later on in the instructions. Error or?

Any expert on the M60 that can guide me? Thanks! 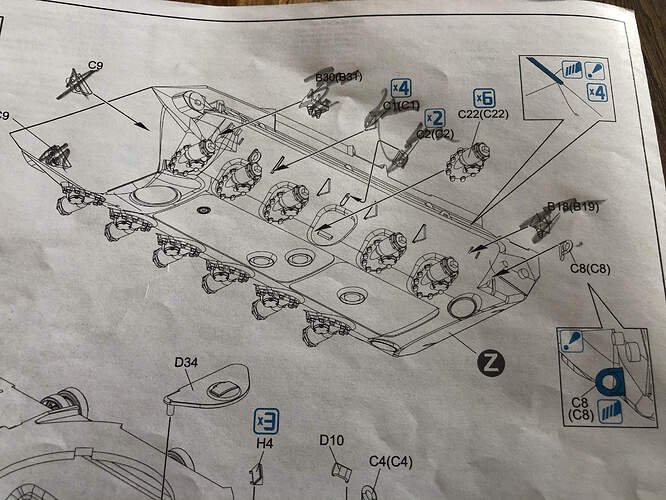 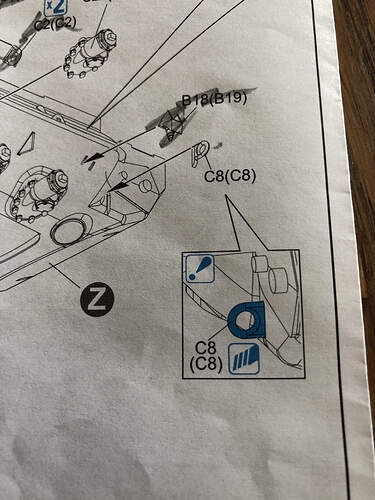 I thought the same thing,but no looking at photos Idid not cut it off and it looks fine.It,s there for tie down to transport 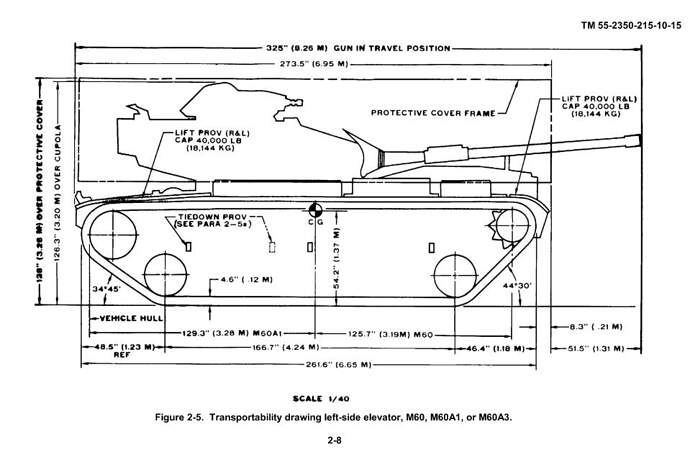 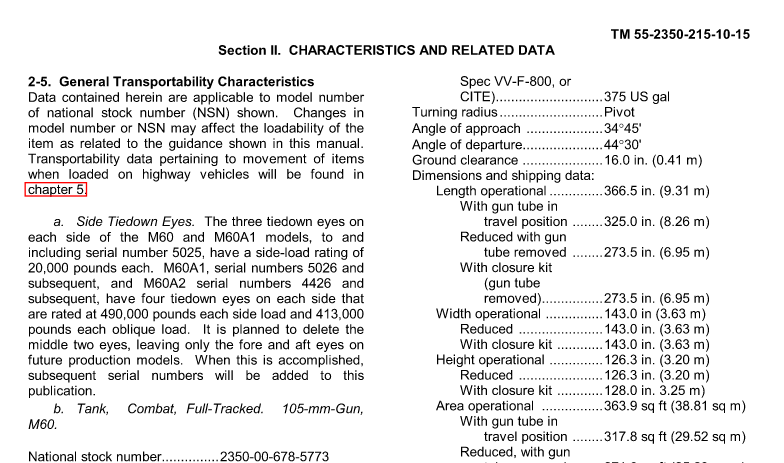 This pdf could provide some clues, see page 7 and 8:
https://www.google.com/url?sa=t&rct=j&q=&esrc=s&source=web&cd=&ved=2ahUKEwj9s8fR8MbwAhVQxosKHZqcAwsQFjAOegQIFBAD&url=http%3A%2F%2Fwww.com-central.net%2Fdownloads%2Fafv%2FM60_spotters_guide.pdf&usg=AOvVaw0Rg6Gspi8EWXObUb0X2f8v

With parts C2 on the hull sides I think that C8 should also be present.
C2 makes it a first or second generation hull (as defined in the pdf in the link above).
First and second generation have different positions for the track return rollers.

I have heard that one version did not use that tie down loop (so it would then be cut off) but all the ones I have seen have it. So I would just leave it as is.
Ken

I am not an M60 expert, I only reported what I found 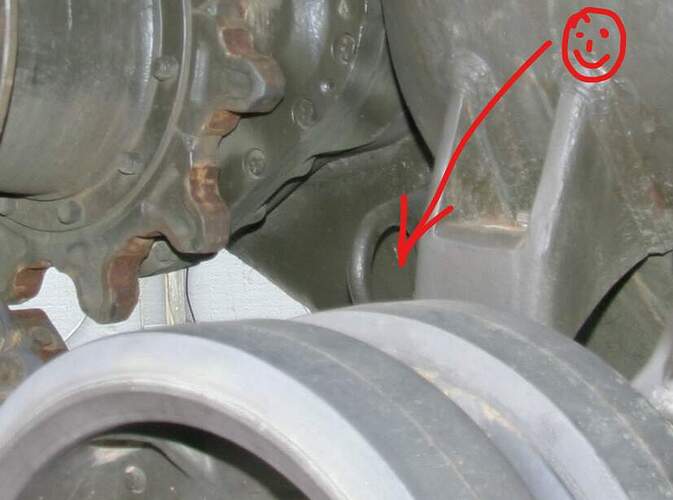 I´ll keep it! The Dragon M60 seems to be a first generation hull based on the pdf you sent.

In connection with the Yom Kippur War in the U.S.A., production of the M60A1 in the Chrysler Tank Arsenal had to be restarted. The U.S. Army had their war stocks of M60A1 depleted, due to the heavy IDF tank losses, as these tanks had been delivered to Israel! All later M60A1s were produced as M60A1 RISE and M60A1 RISE (passive) including the planned improvements.

If you want to know exactly what improvements are involved, google provides excellent assistance! The MBTs manufactured from 1974/1975 only had two 2 lashing eyes! Good to see on all M60A2s, all of which have been built on new hulls. These are significantly larger and are located above the second and last road wheels!

Concerning the perfect Dragon models an other helpful tip! The idler wheels are situated too far back! It requires some surgery! The main gun barrel is too narrow and not long enough! But Aber comes to the rescue Aber 35L282. The roadwheels are to small! Elephant Corporation comes to your rescue!

35156 Aluminium wheels for M60/Magach 6 family, type 1, complete set with 14 vheels - Detailed wheels. The 3D model was created according to the real wheel.

The hatches have no pads or handles on the inside!

My future approach for building an M60 plain will be the TAKOM 60A1. It’s an early machine! The AFV Club is a very good model, but it’s a later build, after 1974/75 M60A1!
For the turret I’ll use the DEF models M60 Patton conversion set. It’s the best one! For a former project I had used the Legend M60 turret, but wasn’t impressed with it! Legend is quite often a mixed bag!

The information given to you wasn’t to enjoy building the DRAGON kit. But all these fault can be corrected.

In my unit,1/37th armor, we did have A2’s with the 4 thick lashing points. Considering when the A2’s were built, it may have crossed the 2/4 lashing point boundary

thanks for your answer!

As I see, you were stationed in Katterbach, close to Ansbach. Former GE Air Force Fliegerhorst in WW II.

Let’s come back to the lashing eyes! As you pointed out, the 1-37 Armor Battalion’s M60A2 had two of the large lashing eyes on each side of the lower hull.

if you need pictures of a slick M60 let me know, as I have four or five parked a little south of me.
gary

If you have the time/opportunity to take pictures then post them here for all to enjoy.
Maybe it could be turned into a photo feature

next time I’m down that way (often) I’ll do that. They also have the Ontos that Academy measured up. so if you want a T165; I can do that one as well. Myself; I’ll be after M4a3-76 pics, and two 155 howitzers. Will be soon as it’s finally quit raining everyday!
gary

Won’t say no to the Ontos, if your able to.

somewhere in a canvas bag, I have a flash drive with about fifty to sixty pics of that Ontos. Can’t find the bag, so I’ll shoot them again. Down side is that I shot them with my S5 Pro camera, and you can seriously blow them up.

Down in that park, they have an 8" towed howitzer (I think it’s the WWII version). An M1 howitzer (155mm) and an M1918. Two or three M60 tanks, and a couple M41’s. Two really nice M4a3 76mm tanks that look to be Korean war era. An M42 that’s needing some major sheet metal repairs, but it seems to be complete. There’s also a Huey and a couple trucks, plus an M1a1 tank. Lastly there is a really nice 75mm pack howitzer in U.S. finish. You’d have thought they’d have an M48 tank, but they don’t. I may have spied one in Columbus though (could also be an M60). What is interesting is there was a bunch of M114 recon tracks down there (target practice I guess), but none have showed up at the park. Forgot! They also have an M110a2 right beside the Ontos!!

I’ll try to get down there one day in the next week or so. Still first priority is the OV-1 Mohawk parked in front of a junk shop! Then an F5e at a Legion post. Their District Commander has told me it’s mine to climb on and photograph all I want to (be surprised what two beers will get you). I’ve even found a real and complete Sky Sweeper about forty minutes west of me! That one wants me to hunt up a Revell/Renwall kit!!

What I’ll probably do is copy them to a CD or DVD and send them to you (If that’s OK). I’ve almost never been able to post pictures and get them usable.
gary

However and whenever works for me.

Our BN started picking up the A2’s from December '75-February '76. Besides also having both numbers of tie down loops, we also had 3 styles of gun tubes. I believe we partnered with the 303rd Panzerbattalion.Prior to the M60 to M60A2 swap, I was the gunner on a slick M60, and our platoon had 2 M60A1’s.One was for the platoon leader, the other for the platoon sgt.

You truly are a Dino tanker!