So… grabbed the Aber set for the Greyhound I’m working on.

The instructions make reference to a bending tool (see photo). 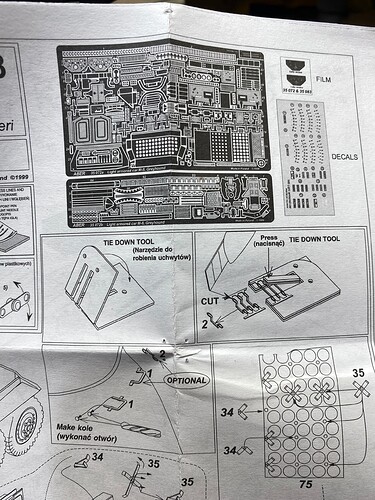 Is this something that should have come with the set? Given the assembly instructions it looks like it should, but I can find no evidence of it nor reference to one anywhere on the net.

Anyone familiar with this thing? It would be quite useful with this build.

Given the assembly instructions it looks like it should

I agree and looks handy but I don’t know the scoop on the tool.

I would not count on such amenities … the set includes a plate, decal and a movie with “counters”…
https://www.mojehobby.pl/products/Samochod-pancerny-M20-TAM-ITA.html

Oh I know Piotr. It’s sitting in front of my as we speak. That’s why I was confused because I never saw mention of it before I opened the package.

Too bad because good lord there are a lot of handles for this thing.

Trumpeter/Master Tools has a jig set that might work for you but then I would was wire for the better 3D effect then pe but that’s just me.

I know shipping can up north make it not worth it just giving options to research.

Nobody’s gonna’ like this because it’s really expensive, but it has many more options and it’s always ready for a good time. Worth having in the toolbox. 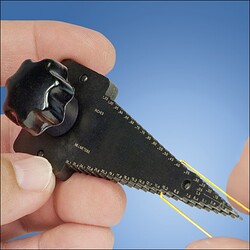 Make Perfect Grab Irons for Your Train, Aircraft, Truck and Military ModelsIf you've ever tried to make your own grab irons by eyeballing and bending wire into shape with a plier, you already know that it's almost impossible to make any two exactly...

Nobody’s gonna’ like this because it’s really expensive, but it has many more options and it’s always ready for a good time. Worth having in the toolbox

That’s actually not a bad idea. I think I have some stuff that’s thin enough 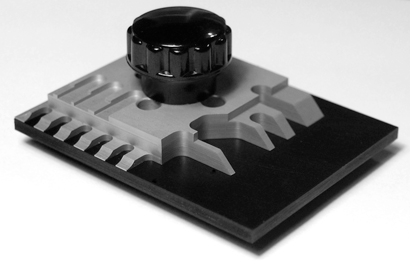 Swivel the top around so the ‘fingers’ are facing the side. Cut a length of wire, slip it under the long ‘finger’, and bend both the ends up to make a U shape. Place some double sided tape along the edge of the base and fix a length of styrene the thickness you want the leg height to be for the bend. Slip the arm of wire under the finger until the belly of the tiedown is flush with the styrene strip, then bend upward. Repeat for the other arm. Trim off the excess on the tie down feet. (I drill a hole in a styrene strip that is as thick as I want the foot length to be, then poke the foot through and trim of what sticks out the other end of the hole). Then all wire tie downs will be the same length at the top, same height off the deck and same ‘shoe’ size…

If you need skinnier at the top, secure a piece of smaller styrene profile under the finger, but remember the edges will round off after a couple of bends.

I’d offer up this simple technique for making these footman loops from scratch. 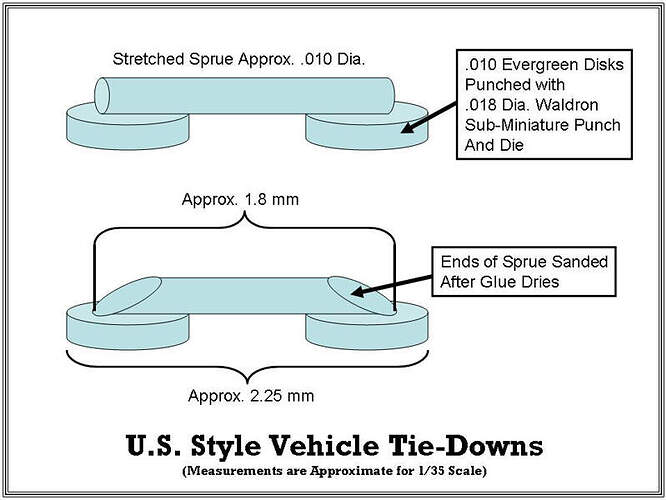 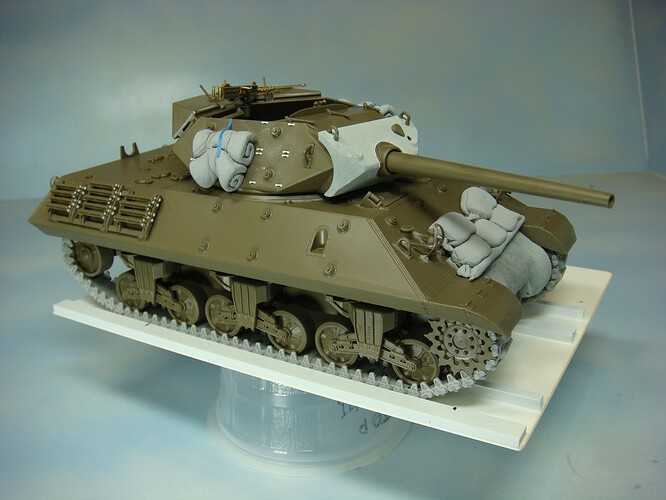 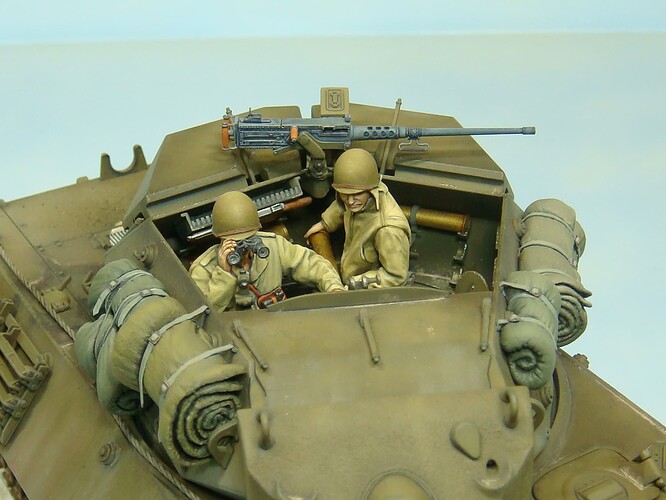 These are really easy to make. Bang out a pile of the styrene “rivets” (disks), glue them on and add the pieces of .010 styrene rod. They have the major advantage of being pretty durable, durable enough that threading straps through them doesn’t just pop them off like most PE footman loops.

Take a piece of etch fret. Drill a hole the size of your discs so it is centred just inside the edge of the fret. Drill a second hole just inside the edge and so the outer points of both holes is the distance you want your discs to be apart e.g 2.25mm as per Michael’s diagram. Score a line from outside the hole through the centres of the holes and one through the centre of the second hole.

Every tie down foot is now exactly the same distance apart and exactly in line with where you want it. Just add your wire/stretched sprue over them.

For laying out and replacing molded on footman loop details, I trim most of the detail off using an X-acto knife. I then use a center punch made from a heavy compass needle held in a pin-vise to mark the end of each of the molded-on footman loops. I make the marks by pressing the needle deep enough into the plastic that when I sand away the rest of the detail, the small divots from the center-punch still remain. I then glue the punched disks over these little “locator holes.”

When I first started using this technique to make the footman loops, I would go through a tedious and precise measuring and layout process. However, simply pressing in locating marks using the original molded-on detail as a guide makes the entire job very quick and easy. For laying out the locations for footman loops to hold tools in place, I dry fit and hold the tool in place and then use the punch to mark out the locations to either side by eye. 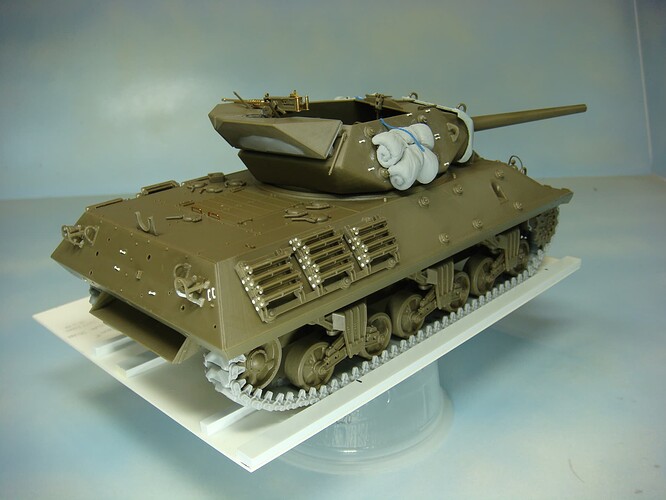 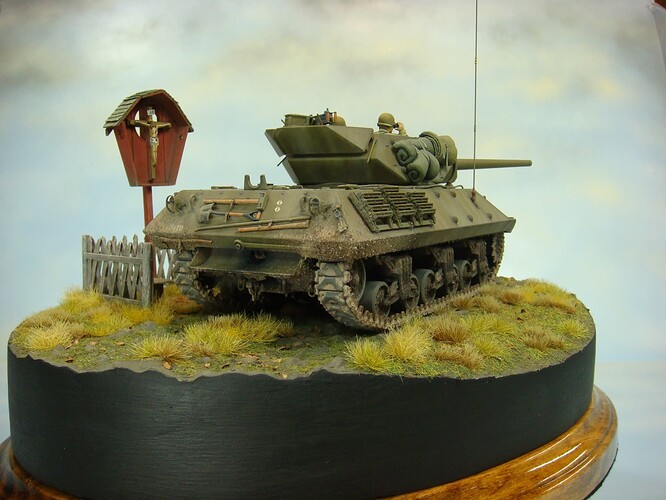 Of course, if there’re no pre-existing molded-on footman loop details, then a more conventional layout process has to be followed.

Hi, if you look on the upper right hand corner of the large PE fret, you’ll find the bending tool Aber shows in their destructions.

Christ I am absolutely blind. I must have looked at that fret a thousand times and just stared right through it.

Too bad because good lord there are a lot of handles for this thing.

And I’ll bet there was not a single one on the real vehicle made from flat strip like the PE parts will make.

If the companies would delete the parts that are worse in PE than they are in plastic the sets would have about 60% of the parts they do now and be far less crowded. Unfortunately it appears that many modelers feel ripped off unless every single copper atom on the original sheet ends up as a part, with no wastage for frames of gaps between parts.

. . .
When I first started using this technique to make the footman loops, I would go through a tedious and precise measuring and layout process.
. . .

I have found over the years that I can align things better and space them more regularly by eye than by measurement. Making some sort of gage or template, for example to locate parts the same distance apart or from tan edge - even if only approximating the real dimension - gives better results than measuring each location with the inevitable location-to-location tolerance and error. It looks better if everything is the same.

I’ve also found that “workable” footman loops are a waste of time and oversize. I made a tool that squishes 0.010 round stock in two places and offsets the section between. (The result looks sorta like a wrapped Brach’s candy . . .). I just cut through the squished parts and glue these “bon-bons” to the kit. If empty they look fine after weathering. If there are straps, I cut them and glue them down on either side. You can’t tell they don’t thread through, and far less aggravating

And here’s the way I make those thingees:

Having taken measurements from the molding that is to be replaced, I find a length of suitably thin copper wire and hammer its end flat, so it would pass through the loop after filing it to the correct width. This wire is then taped to a hard surface, like glass or a metal straightedge. Again using the kit’s molding for comparison, stretched sprue of fitting diameter is placed across the wire’s end at right angles. Taking my elbow tweezers, I turn them so that their shanks can be used to press down on the sprue right next to the template’s sides. With any samples that turn out asymmetrical, the sprue is turned around so the “correctly pressing” tweezer shank can be applied to the faulty side. 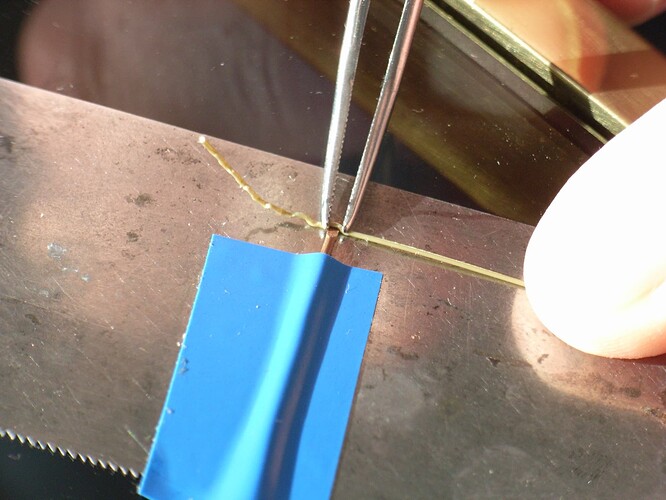 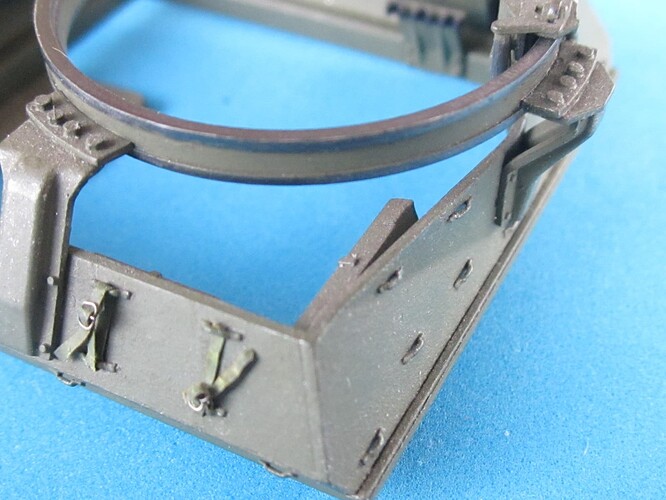