Hi Guys,
I am hoping to make the following two Tiger I early’s
Reichstag 323
Totenkopf 933 @ Kursk.

I have the below kits & not sure if any can make or be mixed & matched to make, I would be doing interiors on both
Cyber Hobby CH 9142 Early LSSAH Kursk
Dragon DR 6252 Initial Production
Academy AC 1348 Early Interior Version
RFM RM 5003 S.PZ ABT 503 Early Interior Version.
Also what would need to be added / removed to make the two aforementioned vehicles??
Thanks in advance.
Mike

Tiger1.Info - Kits This site has lots of outstanding information on those model kits.

Thanks Wade, I did check David’s site, but as Reichstag 323 is a hybrid and I am not sure if any of the other kits accurately represent Totenkopfs 933, that’s why I posted the question say what kits I had already & wondered if any of them or combination of them would accurately be used to make the two tanks from what I have already or if I need to invest in another Tiger. Lol
Cheers
Mike

Hopefully @DByrden will see the thread and maybe comment.

Lol Yeah my thoughts to Wade so

that David does see my question.

Wondering if anyone else has any insights or advice re the original question asked??
Cheers
Mike

Tiger “933” was built early in the “Early” period. You can see that immediately, because it has open episcope holes for the driver.

So the best base kits would be Dragon’s #6950 or Rye Field’s #5003. You have the latter, it seems. The Academy kit #1348 is of a lower quality, indeed I don’t expect its parts to be interchangeable with the other two manufacturers. In any case it’s a later version Tiger.

So, your interior should come from #5003. When you compare it to Academy’s interior you may be shocked at how much better it is.

Tiger #933 had spare tracks on its front hull. In this case they were held by a single metal pole, of round cross-section, welded underneath the overhanging tow points. I don’t know if any of these kits have that exact pole, but it’s easy to make.

Tiger #933 had open visor holes for the driver, as mentioned. Its hull MG had the adjacent hinged bolts for the waterproof cover. Academy’s kit does a particularly bad rendition of these.

Tiger #933 had “standard” equal-length side skirts, which the two mentioned kits do provide.

Tiger #933 had full S-mine gear and the crew typically had all five launchers installed.

Tiger #933 was built with turret smoke launchers but the system was cut off prior to Kursk. So there would be a trace of a weld line on the turret sides, and two small tabs of metal on the turret roof.

Tiger #933 had a HL210 engine. Both of your interior kits do address that type.

Tiger #933 had welded frames on the hull wall where the rear mudflaps attach. Again, your chosen kits do have this.

Tiger #933 had “mirrored” rear grilles on the engine deck - the left and right were mirror images of each other. I don’t recall which kits have this, you should check.

Tiger #933 did not have “legs” on the sides of the engine hatch. If a kit has these, it’s easy enough to cut them off.

Tiger #933 had the “rounded” hub on its sprocket wheels. This is the type on Bovington’s “131” and your kits probably all provide it.

Tiger #933 had no periscope on the turret roof.

Tiger #933 had no track holders on the turret sides.

Tiger #933 had the first kind of Feifel filters (separate drums). Photos show it with the complete system installed.

Tiger #933 had the original kind of engine deck, with the engine hatch latch near the center, and no small “triangle” panel at the back. 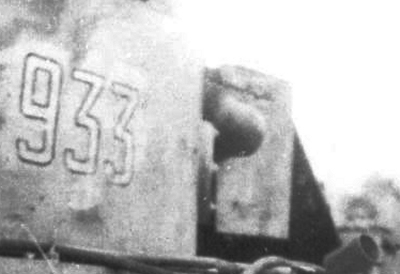 Now, we run into trouble. Tiger #933 had the “wide” turret bin, with a single metal support strip on each side as well as top and bottom supports.See the photo. This kind of bin is not provided in any of the kits on your list. Dragon’s #6950 has it, and you can get it from aftermarket too. Tamiya and Rye Field have an almost identical bin in their “Africa” kits, but they made their parts too narrow, so much so that you would notice it.

Anyway, the positioning of this “wide” bin in Totenkopf Tigers is explained on my page about the “wide” Tiger turret bin.

The rear end of the track cable on the side of Tiger #933 was not splayed out as you see in most Early Tigers. The clips were positioned such that the cable ends were close together and high up. See this photo. There are other Tigers from this time with similar layouts, with small variations.

Tiger #933 didn’t have a starter handle stored at the bottom of the rear wall. It’s easy enough to omit it from a kit and fill the holes.

Tiger #933 had the old-type gun cleaning rod that breaks into five parts, not six. That means the holders on the hull roof are farther apart than usual (I make it 105cm) and the left side holders are shorter, holding only two pieces of rod.

Tiger #933 had the rectangular plate stored on the roof behind the driver’s hatch.

Tiger #933 had the “standard” extended vertical edges on its hull front, not the earlier slanted ones.

Tiger #933 had holders for a shovel on the glacis plate, but the shovel is missing in all known photos.

And finally, a big problem. Tiger #933 had the “thick wide” gun mantlet. This is not in any of the kits you listed.

I designed Dragon’s kit #6950 to build exactly this kind of Tiger - it has the mantlet, the gun cleaning rods, the track cable, the open visor holes, and the turret bin. In fact we only need to give it decals.

An outstanding reply, David. Thank you for so generously sharing your encyclopedic knowledge of the Tiger I. Gentlemen like you are what keep this hobby great.

Wow & double wow!! Thank you so very much for not only all the things that I would need to build Tiger 933 from Totenkopf, but also at least 2 new to me pictures of 933, I am now leaning very much to getting the Dragon kit you mentioned & trying to fit the RFM interior into it!!

Also on a side note, would any of the other Tigers I have build into Reichstag 323 or would I be better off getting the RFM Micheal Wittman Early Tiger with interior to build that from??

Once again thank you so very much for you in-depth answers & taking the time to reply to my questions.
Thanks
Mike

Yes, those “wide bin” Tigers from the start of 1943 have been ignored by model manufacturers until now. Sometimes you get decals for one of them, but the kit doesn’t actually build it correctly. So Dragon’s #6950 fills that gap in Tiger history.

Most of those Tigers survived the summer and fought at Kursk. So Dragon can release the same kit again with new decals!

As for Tiger 323, if I recall, it’s a pretty standard Early Tiger and several kits would be suitable. I will post a detailed description of it in the next couple of days. Poke me if I forget.

I have the decal sheet so that is fine, now to look for the kit!! I will keep checking in & if I haven’t spotted your update in a few days, then I will send a gentle prodding message

Once again many thanks for your time & sharing your well researched & hard earned experience & information.
Regards
Mike

I asked the same questions regarding the Reichstag Tiger 323 a couple of weeks ago…maybe a bit longer. I didn’t get much back in way of responses as to which kit would be best. After reading over the TigerInfo site I settled on the Rye Field Model Tiger I Witmann full interior (RFM5025). This seems to be the best starting point for 323.

Bookmarking on a PC/Mac/Smartphone, probably varies a little bit but goes something like this: 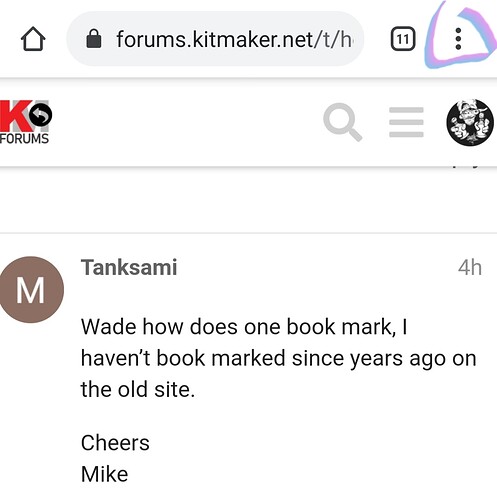 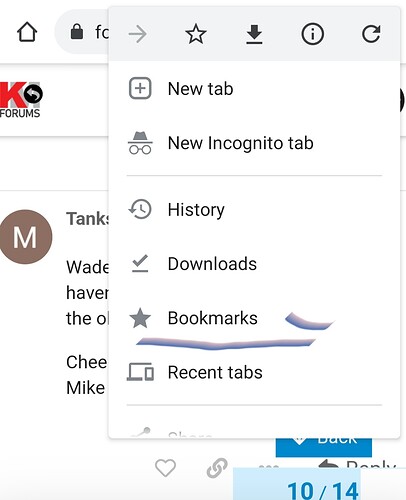 Click on tab go to bookmarks and scroll to the link. 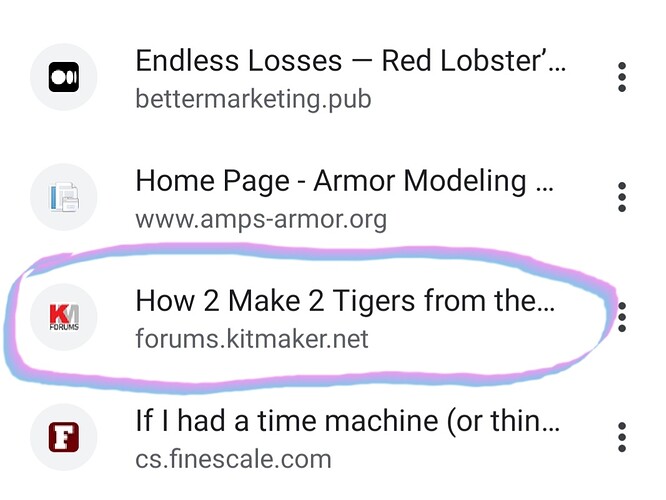 Hey Wade,
Thank you for that I have clicked on the little book marked option in the thread so hopefully I have done it correct??

And so to Tiger “323”. This tank had a hull very similar, perhaps identical to “933” when it was built. But by the time it reached Berlin it had a lot of damage.
Its turret may have been a later version, or it may have been the original turret upgraded with track holders.

It had holes for the driver’s epiiscope, sealed up but still visible.

It had “standard” side skirts.

It had the smoke launcher system, and it was cut off, leaving a line of weld on each turret side and tabs on the roof.

Both of its front mudflaps were missing. The exposed edges were thinned underneath, implying that originally there were no mudflaps but continuous armour instead. This is a feature of about the first 50 Tigers.

It had a thin bar for holding spare tracks at the front, welded at each end to the side armour edge, not immediately below the towing lugs but about 6cm below.

It had holders for spare tracks on the turret, but almost all of the parts were knocked off its left side.

It had the S-mine system, but the launchers were missing and the arms were broken off the rear wall.

It had standard exhausts with shields, still installed.

It carried a 20-ton rated jack, not its original 15-ton jack.

It has a standard “thickened” mantlet.

It had no loader’s periscope.

The rear end of the track cable on the side of Tiger “323” was not splayed out as you see in most Early Tigers. The clips were positioned such that the cable ends were close together and high up.

It didn’t have a starter shaft stored on the bottom rear wall.

Wow once again I offer many & grateful thanks for your sharing of your in-depth advice & analysis. Just a question if Tiger # 323 was more than likely one of the original first batch of 50 Tigers, would it’s hull be an initial hull or some of the first “Early Hull’s”??

Also just one more question please?? Is there much difference between Totenkopfs Tiger #933 vs # 913 as it wasn’t until I got home & added those couple of pictures you posted that I noticed most of the photos I have are actually #913 not #933 as I first thought??

Once again many many grateful thanks for your time & advice re these questions.
Regards
Mike

I’m not sure what you mean by “initial hull”. We define “initial” Tigers by their two pistol ports. 323’s hull is from later than that.

913 is practically the same as 933 but it has the “flat” mantlet which is much easier for you to obtain.

Sorry David my knowledge on Tigers isn’t great I wasn’t sure if 323’s hull being one of the first 50 off would use the same lower hull as say dragons initial Tiger 3n1, or just a normally early hull like on the dragon kit you were advising me on.
Many Thanks
Mike