How much to weather?

I am at the stage of weathering the interior of my T-54-3, I want to glue the hull together this weekend so I can give it a good while to set while I start my next build. However before doing the gluing together I want to add a bit of weathering to the interior. The tank has been in the stage shown in the photos for around a week as I am procrastinating weathering as I don’t want to ruin what I’ve done. For this reason I am reaching out for advice on how to weather. I haven’t done much weathering before so looking for advice.

I’m think of adding some mud/dirt to the textured part of the floor in the middle, some light chips on raised surfaces that would be walked on a lot and maybe on the shell ready rack where shells would be slid in and out and banged around. I am also looking for advice on how to weather the engine. How much grime to add, what color, etc. I am curious how dirty tank engines are actually allowed to get. 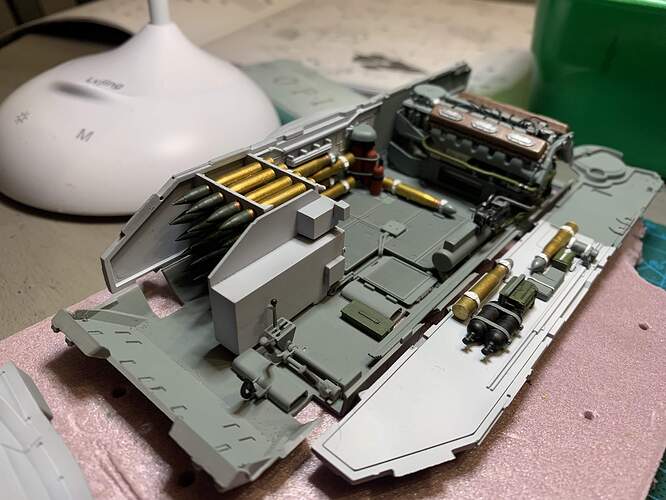 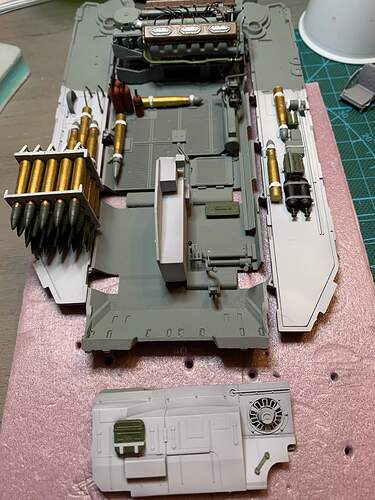 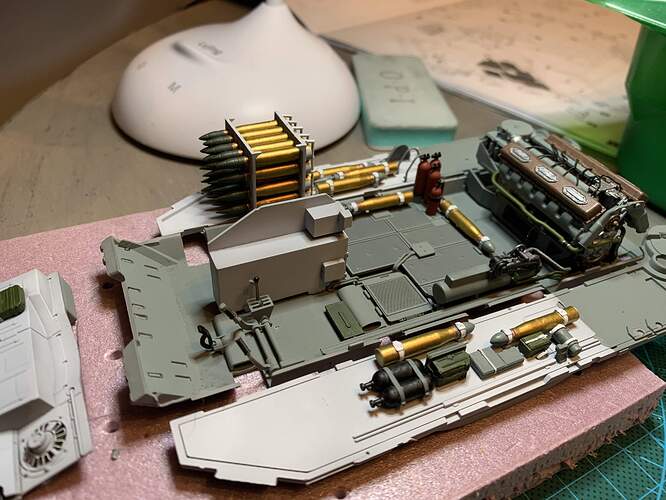 I am working on T 54 1 with interior.
I have reproduced small chips around ammo rack, on the flor, around driver position and some light mud deposits on the flor.
From my point of view since I am marine engineer those engines should be clean without any major leak of fuel and lube oil apart from spils caused by maintenance such as filter replacement etc.

Thanks for the info. Should I do any weather to the engine at all then? I was a little worried it looked to new but also figured they were kept very tidy as a stationary tank is a dead tank.

Would love your input as a marine engineer on if any weathering should be done to the engine or if paint chips, grime, oil/fuel spills, and rust are cleaned up as soon as they occur.

I was following your T-54-1 interior for inspiration I liked the way you finished it. If you don’t mind me asking what colours did you use for the mud and chips?

Regarding engine you should make raw umber or black wash, if you want to make fuel injection pipes make sure that fuel pipe for each cylinder is same lenght, also you can ad some lube oil/fuel oil stain and some chipping on the areas where some maintenance work might have been carried out such as cylinder head, filter casing etc.
For interior weathering I used Abt 502 earth tone oil and black oil

I always give the interior a light wash of a brown/black color just to show dirt in grooves and corners. Generally, interiors are kept pretty clean so everything works. Also, these vehicles are the home for the crews for an extended period of time.

Sounds good. Yeah I didn’t want to go to heavy. I didn’t imagine they were filthy.

Any idea how much if any chipping should be done? I imagine a bit might occur due to spent shell casings hitting the floor and people walking around with boots that may have picked up gravel

Minimal chipping. The paints used are pretty tough and last a while.

Awesome thanks for the help. Will probably just do grime/mud wash on the grooved floor in the grooves, very light chipping on the raised surfaces and some grime on the engine

The engine will show a little bit of wear, but are usually cleaned quite thoroughly when not on a field exercise. In field use, they tend to get a bit dusty in there.

So maybe use some pigments to get a dusty effect? I am going to portray one used in the Hungarian uprising so it will be in field conditions.

Maybe some black soot and brown dust? I am not sure how much black to use though. I know they vent out the side and no real exhaust fumes should be present

Maybe some fuel spills and dust in the engine bay?

No soot in there. I am not familiar with the T-54 engine compartment, but you would likely have some spillage and accumulated grime around oil filler locations for the engine, transmission, differential, etc.

The only spot for diesel soot would be around the exhaust on the left fender.

Thanks everyone, I’ll probably give it a try tomorrow

Added some overall grime to the floor of the hull. Think it looks okay. Curious what others think? 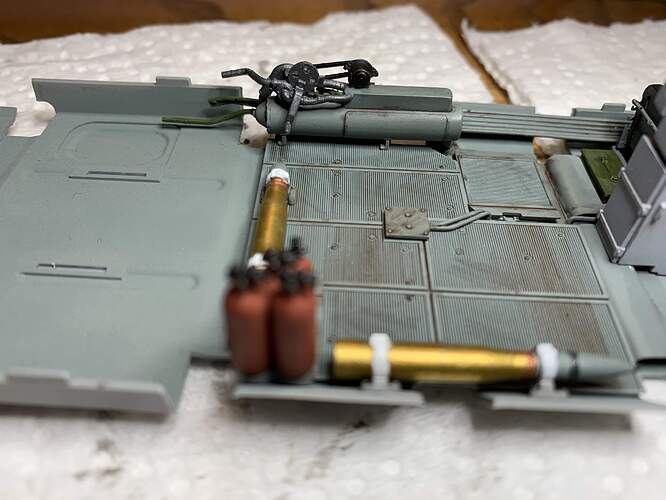 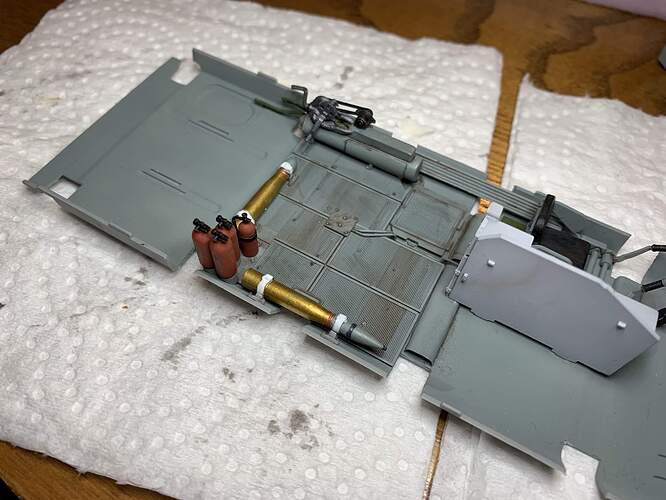 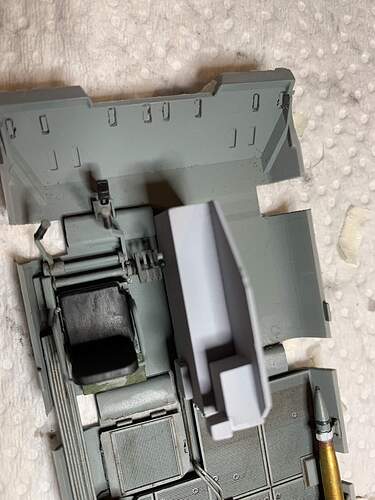 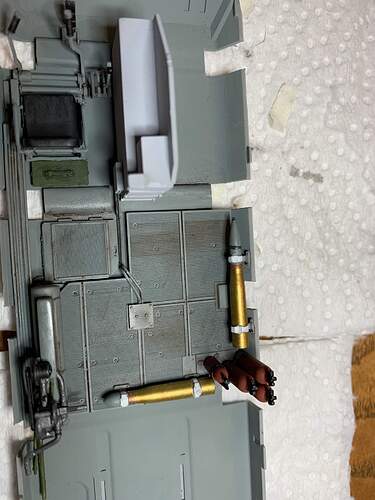 That looks great to me! Personally I would add a dust wash or some pigments to the chair and add a small bit of chipping.

You read my mind! Next steps are chips on the high points and some weathering to the chair!

Debating what color to use for the chips. No idea what color Russian tanks were under the paint. Was thinking a dark greyish color to simulate bare steel

I dont think that the russin tanks were primed so I think your safe going with a dark greyish color. Maybe like gun metal with some dark grey in it?

Oils are much nicer to work with then I thought they might be. Very forgiving

You’re on the right track there with that wash, it looks good

Here I’ve done all the grime for the interior. Added a bit more grime to the floor. Then did pin washes around the raised details in the hull walls, and fire wall, dirtied the fan a bit, and then added a pin wash to the raised engine details, and added grime. Next up some light chipping to the hull floor, and pigments on the chair and engine. 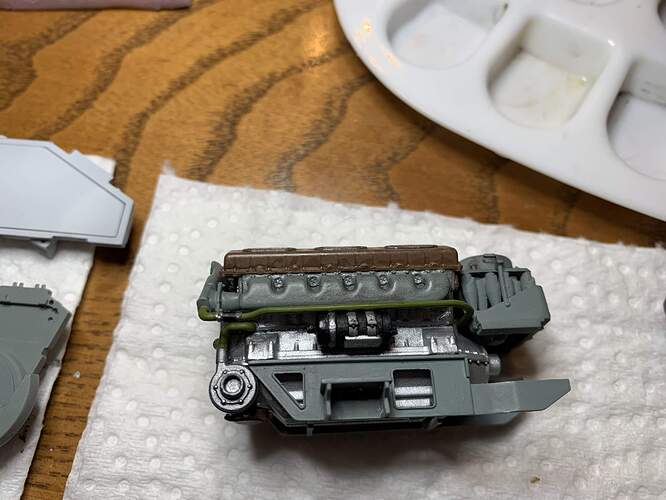 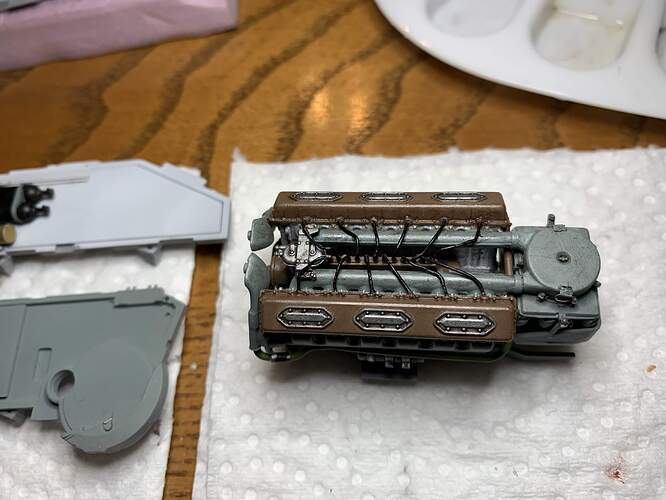 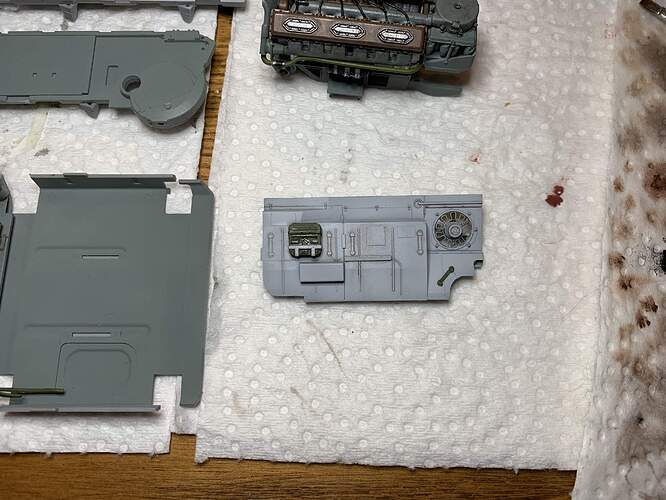 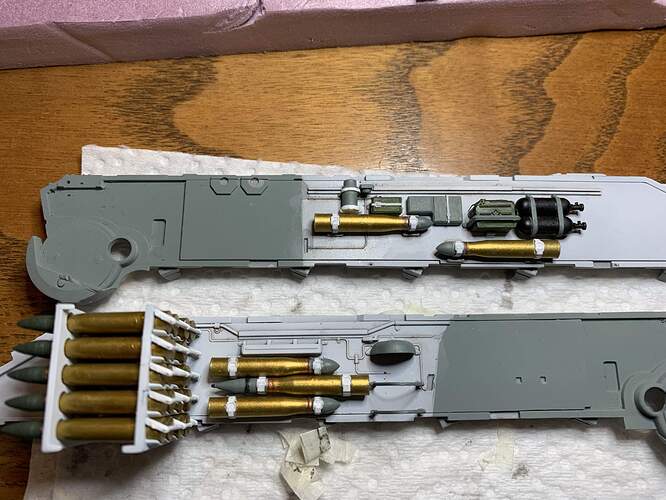 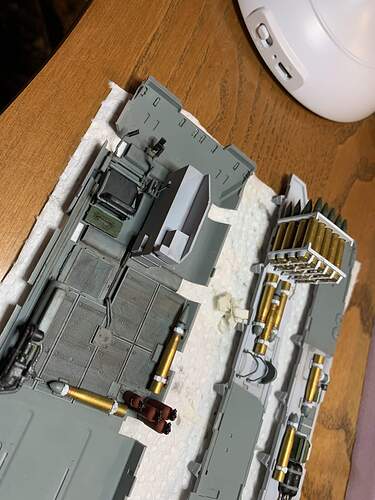 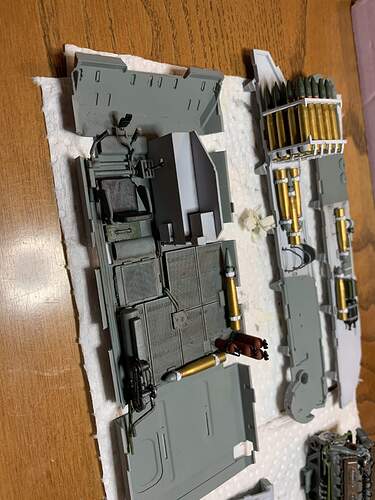