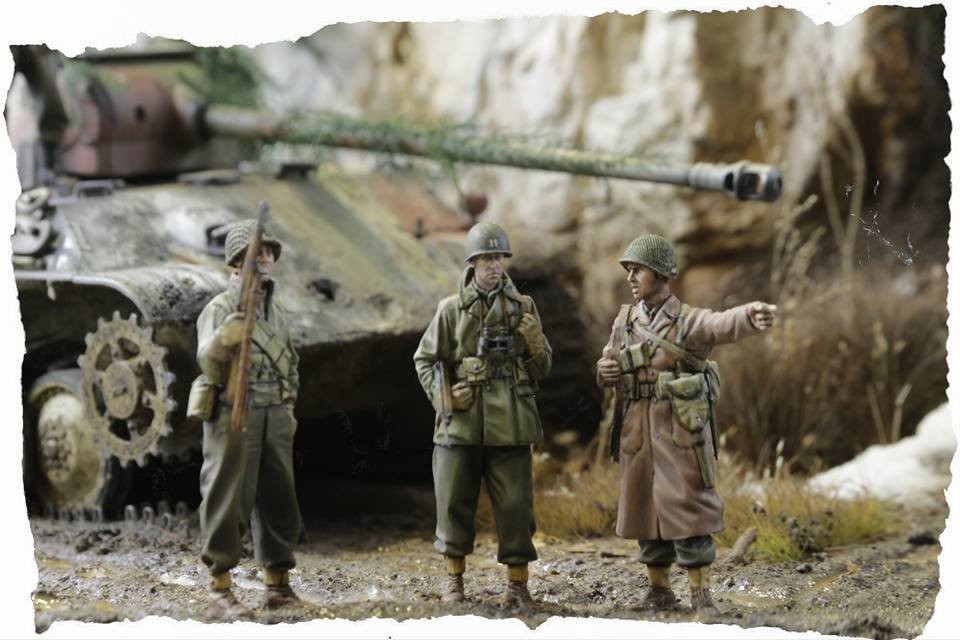 This is partial text from the full article (usually with photos) at https://armorama.com/news/hurtgen-forest-inspirations-by-riccardo-casati
1 Like
Chris_Bryan July 12, 2021, 9:34pm #2

The composition is amazing
Is that a m4 with a m18 turret?
Also what was the process for the exposed clay/ dirt cliff

Outstanding !!!
I too was surprised to see a M18 turret on a Sherman. Artistic license??
Please, tell us about how you, made your pine trees. They look top notch !
Thanks for sharing!
See, Americans also point. It’s not just a German thing

Here is the straight dope on it .
Copied from online source .
The M36 tank destroyer , formally 90 mm Gun Motor Carriage, M36, was an American tank destroyer used during World War II. The M36 combined the hull of the M10 tank destroyer, which used the M4 Sherman’s reliable chassis and drivetrain combined with sloped armor, and a massive new turret mounting the 90 mm gun M3. Conceived in 1943, the M36 first served in combat in Europe in October 1944, where it partially replaced the M10 tank destroyer. It also saw use in the Korean War, where it was able to defeat any of the Soviet tanks used in that conflict. Some were supplied to South Korea as part of the Military Assistance Program and served for years, as did re-engined examples found in Yugoslavia, which operated into the 1990s. Two remained in service with the Republic of China Army at least until 2001.[citation

Hi. Based on references I have, the muzzle brake and the collar behind it on the M36B2 as shown were not a feature on the WWII versions. They were featured on Korea War fielded M36s.

Nice diorama, the figures especially, are very well done. The American TD is (as noted above) an M36B1, a pretty rare vehicle, but they were deployed in the ETO from late '44 on. I agree w/PFanning, have never seen a photo of a WWII M36 with a muzzle brake.

The gun barrel shown with the single baffle muzzle brake and the bore evacuator dates from the 1950’s–correct for an M36B1 as supplied as foreign aid to Pakistan, but not for World War Two. Likewise, the roof armor package offered by Academy is a postwar type supplied on military assistance M36B2 tank destroyers, like those used by the French in Indochina in the early 50’s. Roof armor seen on US wartime tank destroyers was improvised, and varied from unit to unit. It was welded together from thin plate, with rectangular peep holes.