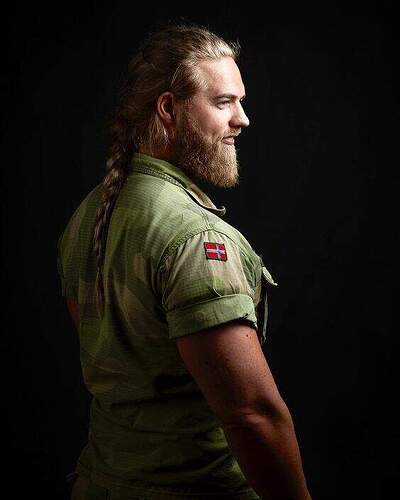 but I suppose, it is a very long standing tradition 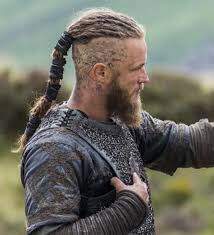 No ones going to argue with the Vikings

I was invited to take one of my bikes to a Family Day at RAF Benson yesterday. I noticed that quite a lot of the servicemen, ORs and officers were wearing beards. I understand that has recently been allowed, in the RAF at least if not the army (the navy have always been allowed to grow them). Female servicewomen seemed to able to wear their hair any way they wanted, the old short styles seem to have gone. One of the fire crew was wearing long pigtails.

Yes, thats a new policy within RAF, well not new, been out for about 18 months maybe a tad longer and they are meant to be of the correct length and style etc. Pig/pony tails (for the ladies) have only just recently come in, but it should only be one (pony) and not 2. Female hair styles are a bit more relaxed but still have guidelines. And this is all dependant on Operational requirements as they are dictated. But its pretty much normal form within RAF units, It was a novelty to start with and loads did it, now its only a hardcore lot who do it, most couldnt be bothered with it after a while.
Army is no change and no facial hair other than what was allowed before, or with a med exemption. Pioneer Sgts within an Inf Bn are still allowed to have a beard and when on Ops beards can and in some areas encouraged to be grown.

Sadly John, as I understand it, the Army’s regulations are about to change too. More recently I espied a Royal Artillery SNCO in my local supermarket with beard and Rastafarian hairstyle, all contained in some sort of headdress/bag-like thing. Very military - NOT. And this type of thing has been going on for some years now; headdress seems completely optional, hands in pockets, smoking as you go, the soldiers around my neck of the woods are, quite frankly (by any standard) a disgrace. Of course, there are those who will say that it doesn’t all matter; look at the Israelis for example - they’re pretty casual but they fight well enough, and so on; however, I always thought British soldiers were - and could be a little bit better than that.

'Just glad really that I had my time when I did and it was still an Army, not some all inclusive social-experimental nightmare.

It was a Tri service proposal regarding beards, but it was vetoed by the Army Field Sgt Maj. There are still a lot of variables regarding facial hair and religion and Med issues and restrictions which has a knock on affect with head dress so it is all a bit of a minefield to be honest. Me, I just prefer shaving lol

This kind of thing just burns my ass. When you join the Army, you don’t have the right to wear your head and facial hair any way you want, no matter what religion or gender you are. You should have thought of that before you joined. The Army however has the right to say these are the standards and you will comply with them. It embarrasses my soul when I see a soldier looking like a rag-bag. A soldier should have a distinct, distinguished, strack appearance, in or out of uniform and carry himself accordingly. He should take pride in himself and in the Army, and be good to go at all times.

Me, I just prefer shaving lol

Took 15 yrs but I was finally able to not shave and stick with it. Been five yrs cured, much to the wife’s disappointment.

Cannot break the long hair training, number 4 guard every 6-8 weeks. Some things just stick with you.

I’m a #2 guard every 4 weeks and I shave every morning. Can’t help it. It’s also a hell of a lot easier to take care of! One thing I developed as an Infantry Sergeant is what my children have labeled as a “resting mean face” and my grandchildren call “grumpy face” and I can’t control that that’s just my face. I try to smile more but I blame years of dealing with enlisted men and Second Lieutenants…

It goes beyond discipline… which of course can effect group moral and effectiveness.
In limits an individual’s function.
Imagine that soldier mentioned by BootsDMS with dreadlocks in a bag… now imagine him trying to wear a helmet or gas mask? How about over the ear headphone type ear protection or communication headphones?

OSHA has regs on helmets. Labor unions have made exceptions. The end result is dangerous
I have seen this all too often in NYC among construction workers

I would get it cut more frequently but it’s a compromise, the wife wants the hair longer and not to cut it. I have 20 yr old wahl clippers. I give on hair and keep the beard. It’s the small things I do for the relationship that helps.

Sadly, all unnecessary, due to a succession of “Right On” Generals with their trendy ideas and an all too willingness to abandon traditions and standards; for instance those great historical positions of Quartermaster General, Adjutant General, Master General of the Ordnance, all gone, culled in the pursuit of progressiveness, to be replaced by a bland list of “Directors”. No longer an Army worthy of the name (not least given its current size), just another civvy firm, which may well be found out or at least lacking. The trouble is, such a discovery, will, in all probability, cost lives.

Armies exist, essentially, to kill people and break things. A maxim which increasinglyseems to be losing traction:

Genetics told me the barbershop was an unnecessary event. I bought clippers during the lockdown. Drag it over my noggin until it’s even.

On a related note, the British Army starting offering breast enhancement procedures to its female troops several years ago to improve morale. Not sure whose, theirs or the males.

THE British Army has paid for a handful of female soldiers to have breast enlargements to make them happier, the Ministry of Defence said on Thursday.

Are you sure this is limited to female troops? Could be considered discrimination.
Also… size limitations. If there aren’t any be prepared for a slew of individuals not fit for duty and good luck fitting them into uniforms.

To be honest this seems to be a trend amongst uniformed organisations. Regular wear in the army around here are combat fatigues for everything except a parade through town on Remembrance Sunday. The civilian police uniform has degraded to the effect that it’s hard to tell a policeman from a security guard nowadays, except the security guards tend to be smarter as they are mainly ex-soldiers. The old “Bobby’s Helmet” is only worn on special occasions, usually it’s some nondescript cap and pullovers or shirt sleeves with the stab vest and loads of ironmongery.

I just don’t understand it these days. When I was into indentured slavery we had little choice about the way we looked. When I was stateside I took pride in the way I looked. Often shaved twice a day. Spit shined boots was the proper mode of dress, but almost never broke starch. Guard inspections were a very important thing for me and rarely if ever placed less than second place. I had reasons, but also had pride in the way I looked and dressed.

I went over seas with all new clothing and three pairs of boots. Within six months the leather ones were trashed, and the jungle boots were a beat up grey. Clothes rotted off us, but that wasn’t our fault. Still shaved everyday, and got hair cuts when we could get one. I’d like to say I was in fear of the First Shirt, but not really so. He took it to heart that his kids were stinking and covered in mud, but he always let you know he was proud of you. A trip to the rear saw clean clothes, and we always got fresh clean ones. They simply burnt what we came in. The Batallion officers would rag us about the way we looked, but never around Top or the SGT. Major! The Colonel and his XO knew, and as long as you shaved and got a hair cut; you was OK with them. Now if I had the choice, you can bet your life I’m gonna shave and get a hair cut everytime. Besides having a beard and a gas mask just dosn’t work well.
gary

we had no women within 40 kilometers of my base camp, but if we did and they made that offer the morale would have shot thru the roof!
gary

Well,concerning facial hair and even head hair for that matter. When I was deployed to Desert Shield/Storm we had at one point, reps from the folks that built the gas masks we were issued visit us in our cantonment area. They did a field test on the proper fit for every trooper in our Regt. in Saudi Arabia. It was found even one hair hanging down the forehead and stuck under the masks’ seal would compromise the seal, rendering the wearer vulnerable to the effects of whatever agent was being protected against. ONE hair. So…no beards. At all! Case closed.
J