If I haven’t mentioned it yet, the bulk of the P/E on this build comes from Voyagers aftermarket set which is specific to Mengs G1 Jagdpanther, Voyagers PE35955 Set: 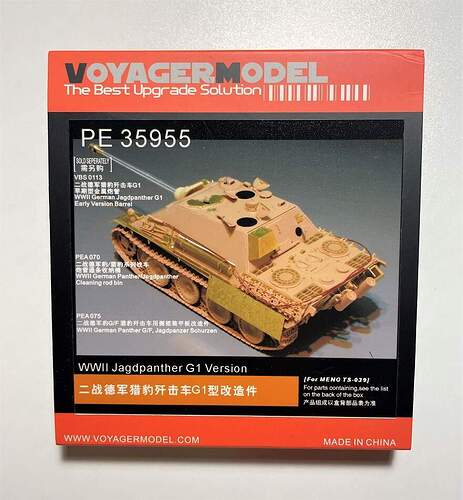 I have almost exclusively only worked with Voyager P/E, mostly due to the fact the first P/E set I brought was Voyager, and it just worked for me so I’ve never had a need to look elsewhere.

However, I had some fun with their front fenders on this kit, and couldn’t really get them to work as planned. The P/E part has a series of teeth like items that should all fold over to help create the fender. I didn’t have any pictures, but below is my sketch of what the Voyager part looks like flat: 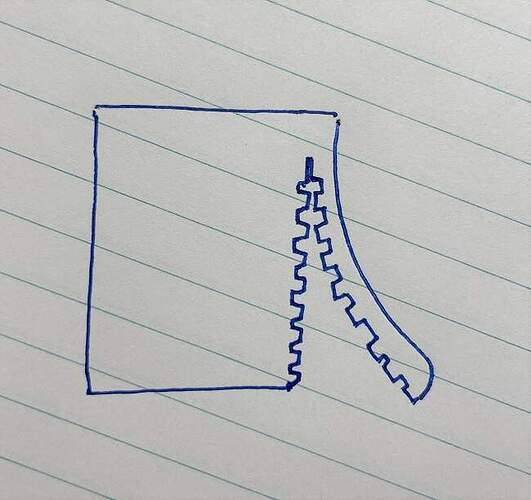 It wasn’t working for me, so I ended up chopping off almost 3/4 of the teeth, all marked in red in this sketch were removed entirely: 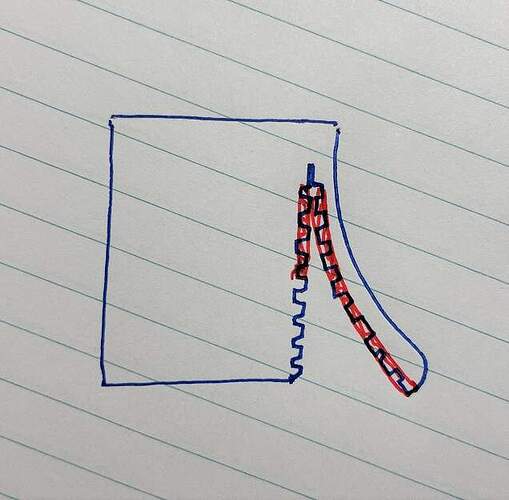 Things were a lot easier once modified. You do end up with some gaps however, but nothing a bit of putty hasn’t fixed, the fender is plenty strong enough modified. End result: 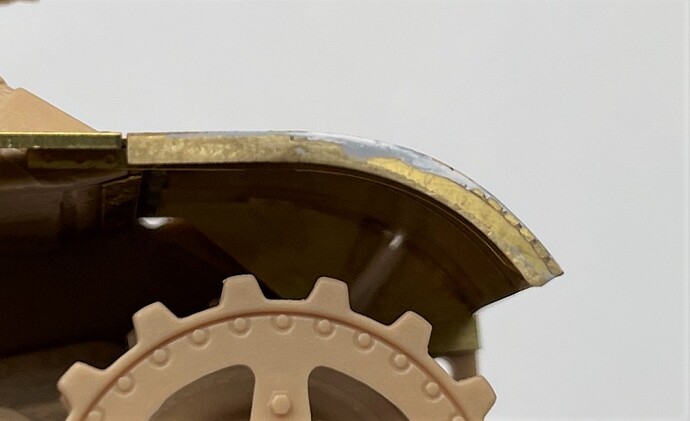 A minor thing really, otherwise the Voyager upgrade rates a solid 10 so far. And hey… maybe its just me that has had trouble with the fenders

Update as to where I’m at now I have those pesky guards out of the way… this is an older photo that went MIA, some alterations to the jack. Mostly as per Voyagers guidance, but I also replaced the two grab handles with some copper wire: 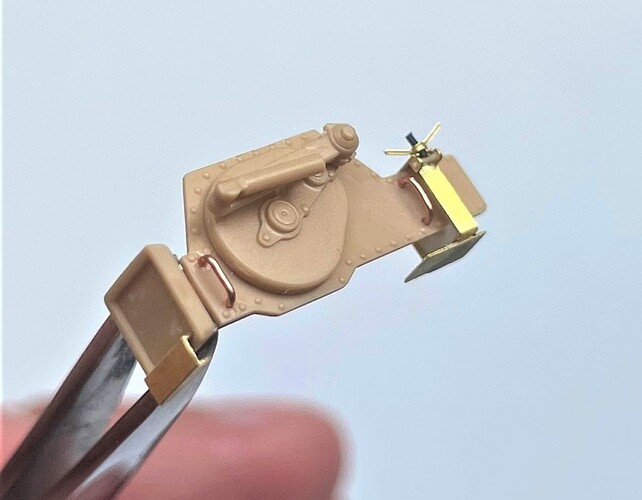 One guard fitted, as well as the base for the Notek light, and some copper wire for the Notek / Conduit. The white putty was needed to fill some gaps. For this I diluted Tamiya White Putty with some lacquer thinner, and painted on with a brush, excess was then removed with a swab dipped in lacquer thinner: 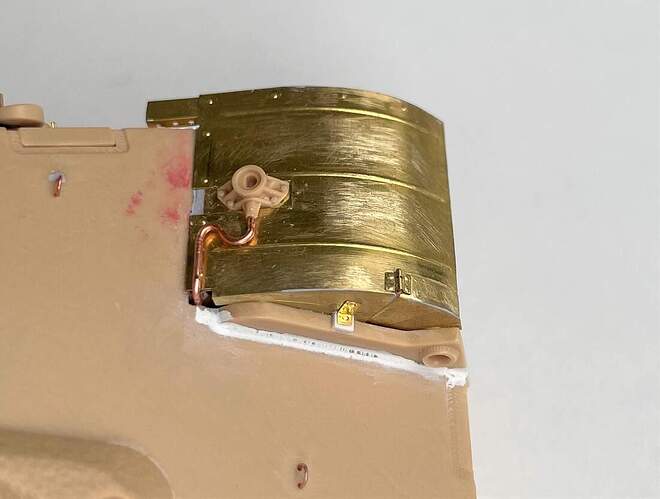 Second guard on, and MG fitted (its an Aber one if I recall correctly). More diluted putty needed around some gaps… I suspect the diluted putty might have covered over some of the nicely moulded weld beads, I guess I will find out when the primer goes on: 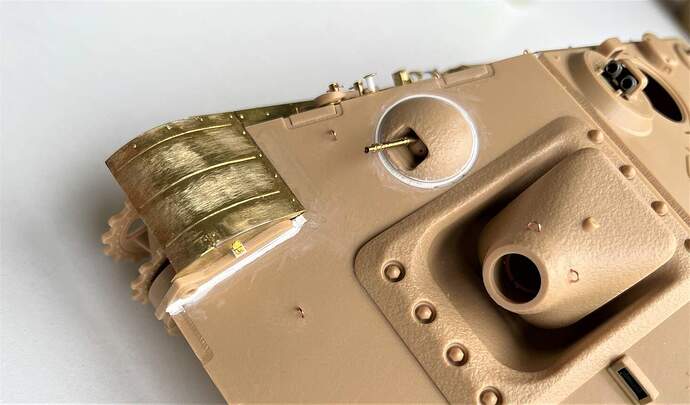 More of the same, I also have mounted the Schurzen mounting brackets down the right side of the vehicle: 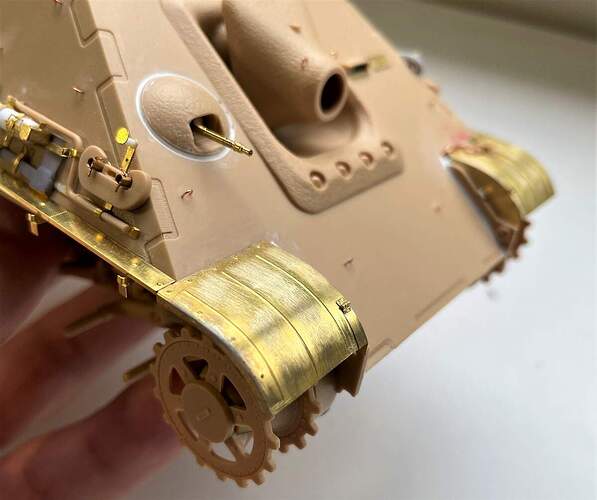 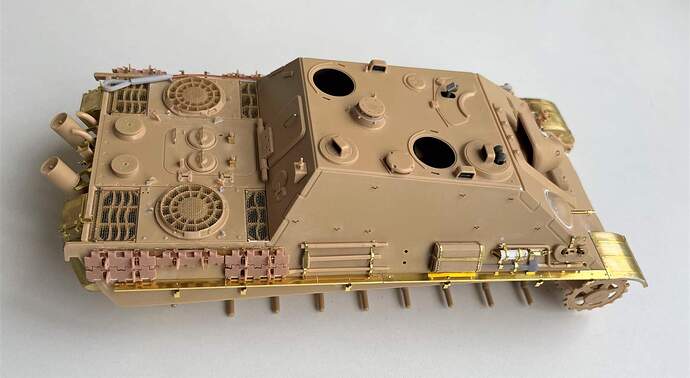 Left side overview, tow cable mounted, that comes from Eureka. For some reason the left front guard sticks out a bit too wide, and pushes out the schurzen rail too far away from the hull. That means the photoetch doesn’t sit into the groove that I have running down the hull… so… now I have to now fill in the groove, well at least half of it anyway… hence the white mess below 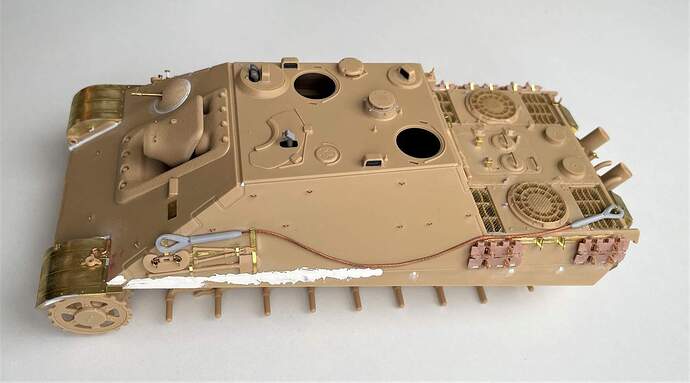 Nice work on the PE!

Todays Episode is brought to you by the word ‘Hatches’ 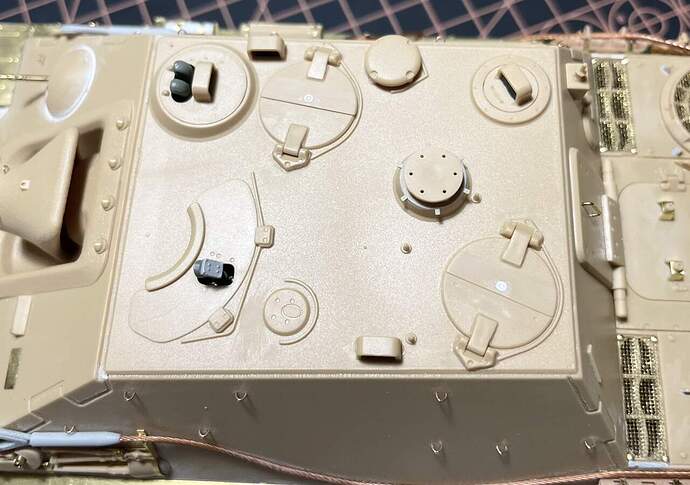 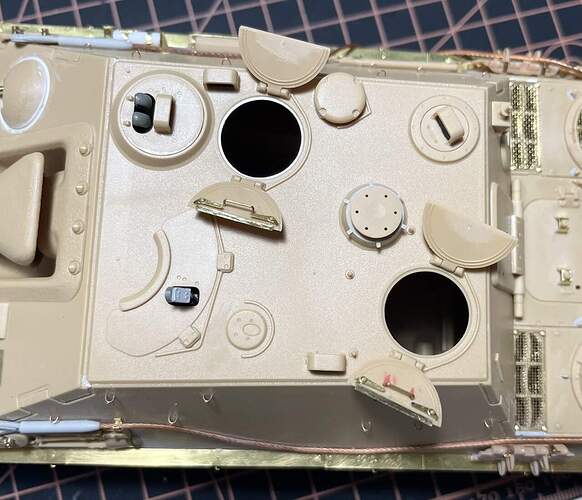 There was a bit of ambiguity between the Meng Instructions and Voyager instructions around the hatch inners, so my interpretation is loosely based on this photo: 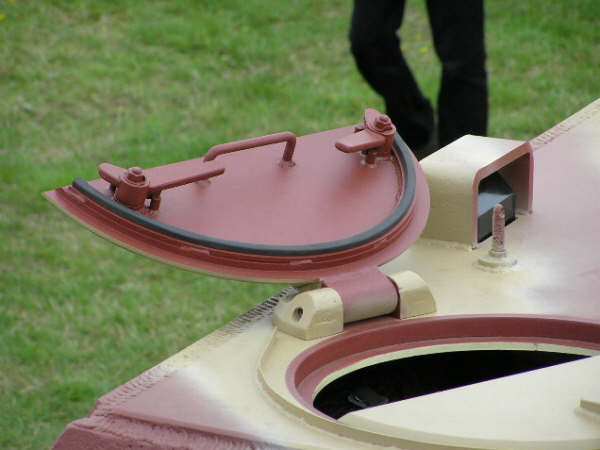 All tow cables and side skirt rails now in place. All the ‘heavy lifting’ is close to done as they say, just a few bits to add here and there…… then perhaps some figures and stowage?

Found a few figures that hopefully will work. A very nice set from Royal Models, as below. I plan to use the two fuller figured lads. Hopefully they are close to period correct…. my knowledge / research on figures is very lacking…… 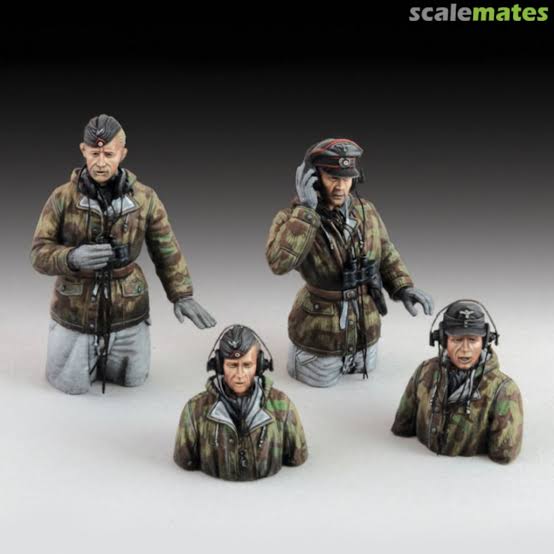 Test fitting one of the gentleman. Seems to stand very tall out of the hull??? Hopefully realistically??? 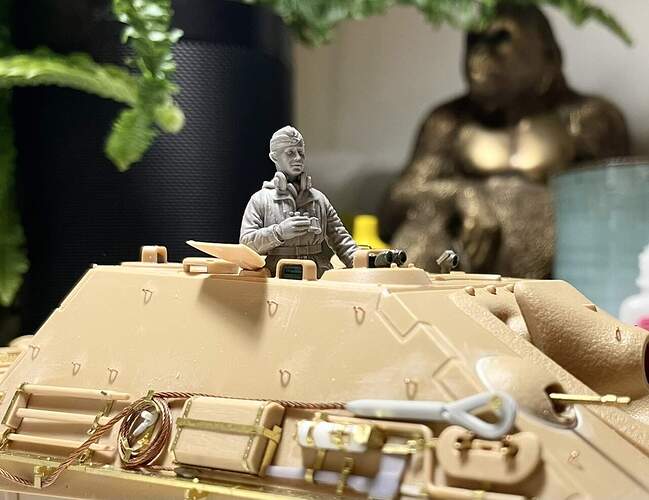 Touching up some seams, and adding some chords. These Royal Model figures are fantastically sculpted.

. Still got a couple of wires to add for one of the throat microphones, and some bands for the headphones. 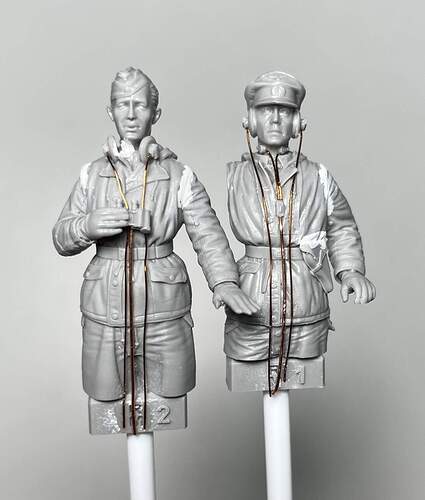 Those figures look very good. I like the mock up one with him in the hatch.Very nice

Great figures but are dressed for the cold.

But, a man standing in the rear hatch would be very unlikely to wear a headset. See here;

Headsets in the Jagdpanther

I must retract what I said there.

I’m still researching the Jagdpanther, and somebody just sent me an internal photo… the loader was on the intercom as well!

Thanks @DByrden, interesting observations, I was a bit worried about the intercom - or lack thereof - but fortunately things appear to have swung back in my favour… this time (gotta take the wins when I can).

Things are moving at a glacial pace at the moment. Wasn’t sure how to connect the headsets band, so drilled some 0.4mm holes, and inserted some stretched sprue ‘pins’ leaving them pretty long. 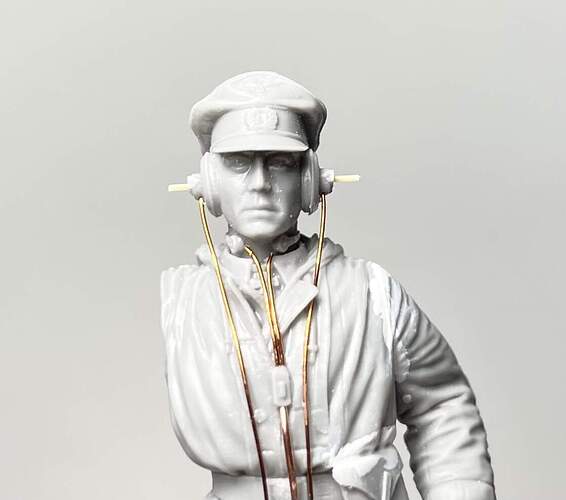 Then slipped the band over the ‘pins’ and fixed with superglue. After glue sets, clipped the pins down to near flush. Job done. 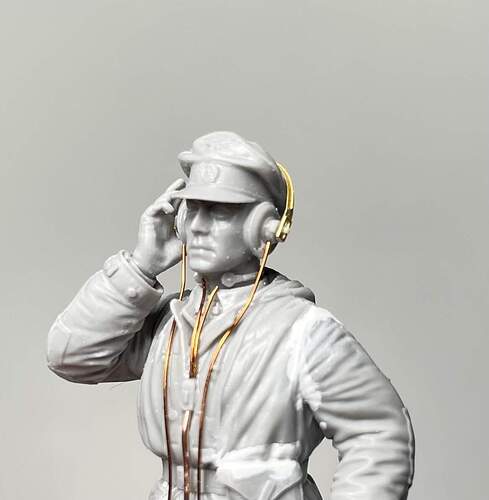 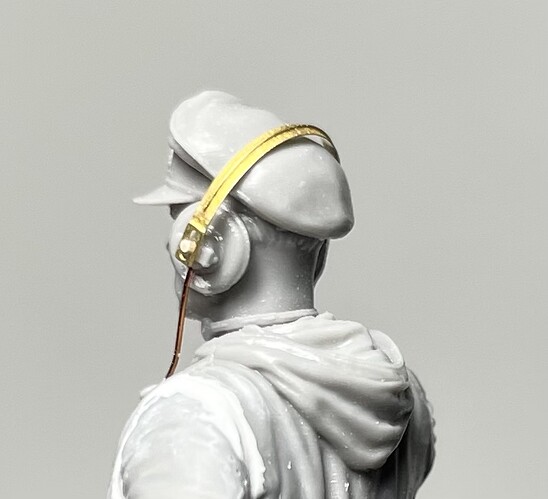 Nice job and the wiring looks very good. Adds a lot to it

I thought the headphone wires joined together sooner than that?

Yes, I would definitely agree with that, probably in reality join up somewhere between belt level and the throat mic junction box, that being based on this image amongst a few others I have seen: 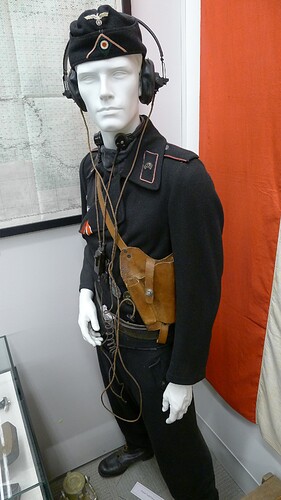 That guy is looking seriously peeky, needs to see a doctor I reckon.

Cool kitty in a raw state, looking forward to painting and weathering.