Just curious, how many started/unfinished kits do you have?

I was reading a post about “when to bail on a kit” and noticed that several people stated they had put kits on the shelves for years. Being curious and maybe wanting to justify myself, I was wondering how many started/unfinished kits do you have and how long have they been in that condition?
God bless You All,
Joe

Far more than I like to remind myself of.

At last count around 30, with some going back 20+ years. I’m slowly whittling away at that number.

I’ve currently got one on “long term hold” that’s really just sitting there because I got distracted with a bunch of the group builds on here.

I make a point of not letting things languish because I have the attention span of a goldfish and suffer acutely from “ooo shiny”.

I have only a few that have been shelved for the time being, the old ICM Pz II flammpanzer and an Italeri Opel Blitz. Both have been superceded by new and better releases. I have a Zvezda Mercedes 4500S truck that is on hiatus as I was having issues with fitting the cab properly and getting the engine wired up. It was just above my skill level at the time but I will be going back to it as I was doing quite well with it until then. So, that is three kits.

And that is before any summer builds I decide to add.

I try and keep it to around 4, no matter the progress or age. I have to force myself to do this to keep my Magpie “Shiny New Thing” condition under control or I end up overwhelmed with unfinished kits, open boxes, keeping track of what kit needs exactly what paint etc.

Right now I have 2 shelf queens who have been sitting almost a year. 1 in the paint shop and 1 under active construction.

Trumpeter IS3M - got bogged down with metal tracks

Panda Abrams - went off at tangent

BGS MOWAG - within a gnat’s whisker of completion

What is wrong with me?! I do think it’s in the nature of the hobby; it is so stimulating it makes it so easy to go hurtling off on a tangent, and one can be easily thrown by what new kit may suddenly appear. Also, I find even the site sometimes distracts and sows the seeds of yet another distraction. This great hobby of ours!

None lol. 3 kits WIP to be completed within 3 weeks to a month max.

3 kits WIP to be completed within 3 weeks to a month max.

I would say maybe 10-20 I don’t really keep track of those that well.

I currently have 7 in various stages of building.

I’m trying to get all but the half built done before I crack into anything new. It stresses me out having a ton of half built kits around

Wow! I guess I’m doing OK then! I’ve only got two underway at the moment. I’ve got the Miniart Ball Tank that is ready for painting and the Trumpy NBC Stryker about halfway through building. 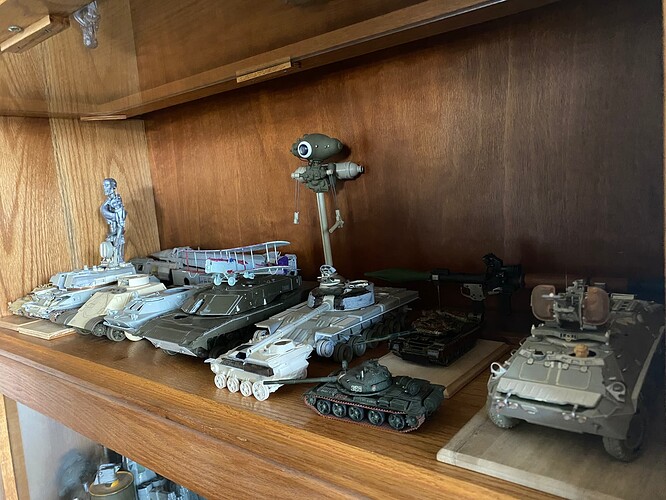 Two, a Dragon M4A2 and a Tamiya Cromwell. Life got in the way of both so a return to finish at some point is the plan.

Two; one under construction, one ready for paint. I usually only have the one I am working on. I don’t like to have unfinished business hanging around.

2 kits.
M2A3 Bradley Tamiya/Legend stand-by for a few months (complexity of the built and need inspiration)

Work in progress for Stryker M1127 RV Trumpeter with slat armor.
Strangely I am more motivated for this one while the built is more complicated.
Like heavyarty, I usually try to do one kit after the other.

Oh dear - how long do we have?

Far, far too many - maybe a few dozen at any one time. But the mojo comes and goes, so I don’t force it. Besides, don’t kits mature with age? Or is that just wine and whisky?..

Most of my unfinished builds are fairly recent and in the paint queue, and to some extent the past over 2 weeks of constant rain and associated humidity make doing those difficult. There are some which I need to get back to.

I do have some long term shelf queens though: