Carlos, the British Army’s main effort during the Cold War was focussed on British Army of the Rhine so nearly all soft-skinned vehicles there were left hand drive. One would find the occasional vehicle still in right hand drive, and of course, when deploying on exercise (in reinforcement-based scenarios) UK-based units (with right hand drive) vehicles would be seen.

Thanks guys. I was worried I would have to cut up the one in my stash to correct that.
How about the ones deployed to Saudi in 1990 for the 1991 Gulf War? Were they like much of the US stock taken from war reserves in Germany and left hand drive or UK right hand drive stock?

I would say both, depending what unit it’s coming from and where they were based out of

If, for whatever reason you wished to utilise this one as a Brit version: 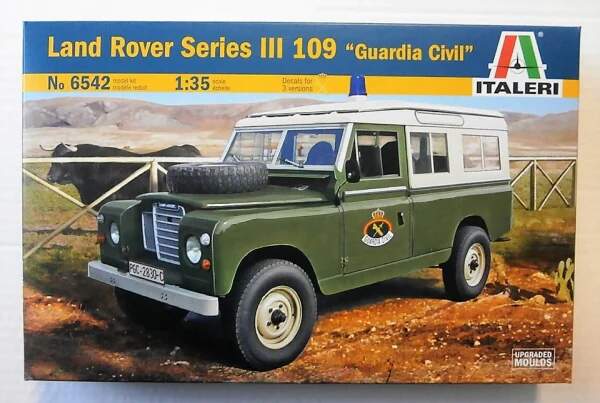 it comes with both left and right hand drive consoles.

Hence the upgraded molds in the lower corner. I built the Testors Italeri release long ago, and have another Revell Germany one in my stash. Of course both are the older original molds with only left hand drive. Looking on Scalemates, I see that they changed to offer both left and right hand drive options.

I had the original release from Italeri and that had both LHD & RHD dashboards. Remember that the kit wheels are wrong, they should be 5 stud. AA and a few others make them.

The upgraded moulds on the Gaurdia Civile refers to the hardtop.

Jason, not to argue for the sake of it by after a rummage amongst my (half-built) Italeri original, I see no evidence of an alternate dashboard/console.

I agree about the wheels; a shame. I have tried carving the wheel-nuts off and relocating them, with mixed success.

Thanks for that info on the bolt count.

As far as the debate on drive side options goes, just check Scalemates and the instruction sheet scans on there for the kits.

Accurate Armour do a nice set of replacement wheels and yes newer kits have L/R dash options .
Years ago I converted one and made resin replicas