Background- The kit was purchased in the early 1990’s for like $13 at one of those mall toy stores like K·B Toys that have all but disappeared. I was delighted with the purchase as several friends had bought the same Tamiya
kit #35156 for like $35 at the local hobby shop.

The kit was finally build, painted and weathered in early 2003 after a four year break from the hobby. A friend provided the “Loreli’s Gem” decals from a DML M1A1HA kit.

Contest travels & tight rubber band tracks took their toll on the model. Basically the suspension imploded one day at a contest with commander side drive sprocket snapping. I guess the sudden release of tension on just one side caused both idlers to split and shear of the shared plastic axle. In anycase half of one idler was lost.

Eventually replacement parts and tracks were located but I lost focus on repairing the model. I was active about two years before taking another extended break.

So finally after waiting patiently in a copy paper box for eighteen years and enduring several moves, the old M1A1 spent the last two weeks on and off the hobby desk.

Half dozen or so loose broken parts were reattached or replaced. Road wheels that sheared off of their axle spindles were super glued back. Replaced missing barrel on MG 240. Rear sprocket was repaired. Idlers repaired and glued flush as the axle had disintegrated. New rubber band tracks painted and weathered. The new rubber bands are loose and tacked in place so as not to over tension the very very fragile idlers.

A new base was used as my base finishing improved over the years. The original name plate “Loreli’s Gem” was retained.

The antennas have lost their tension over the years but I’ve decided to leave them well enough alone.

Thank you for looking. 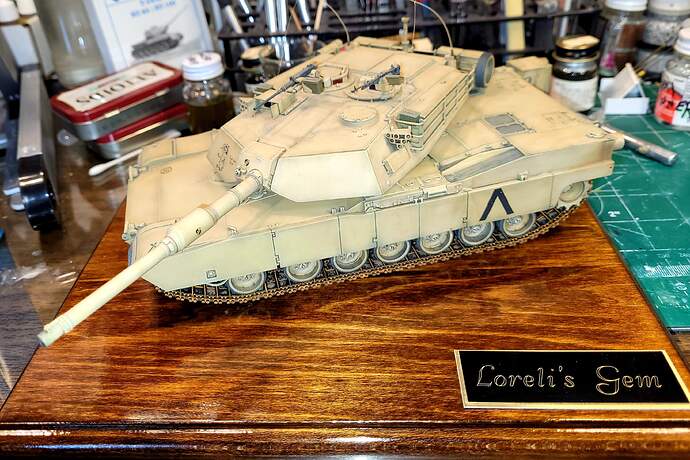 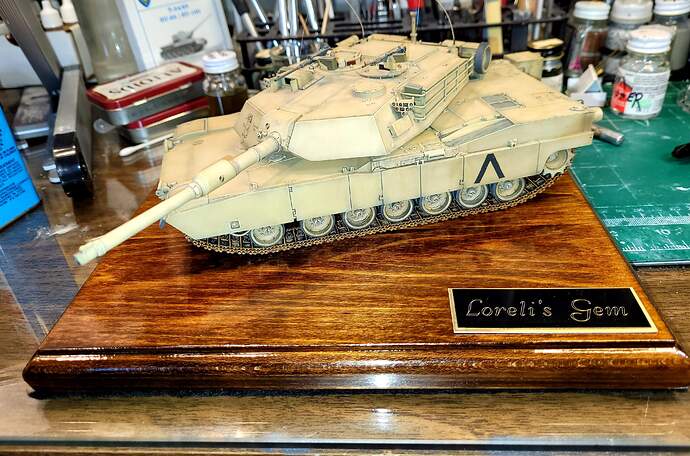 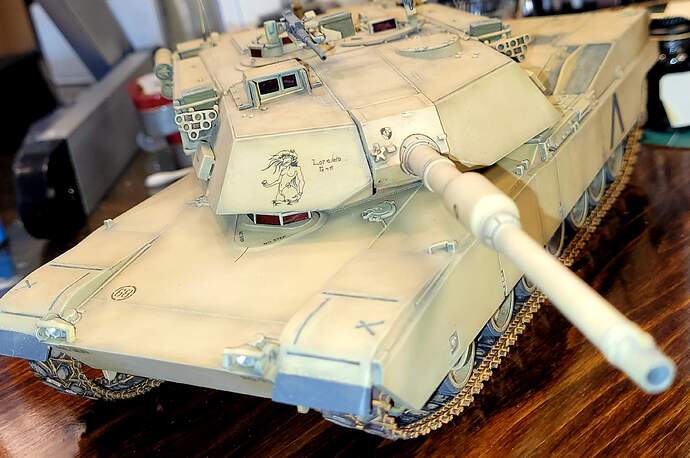 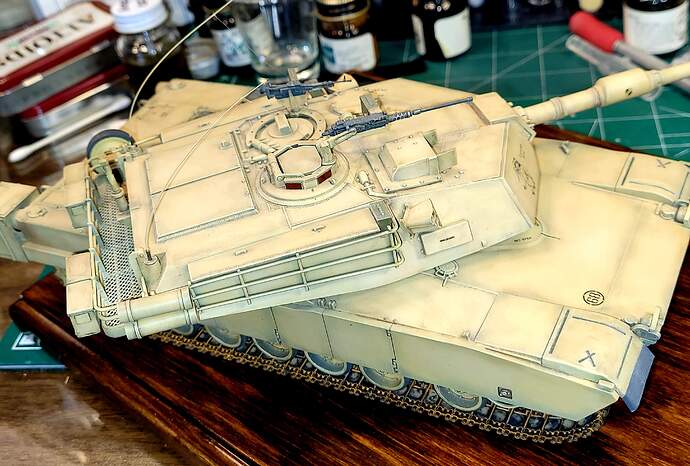 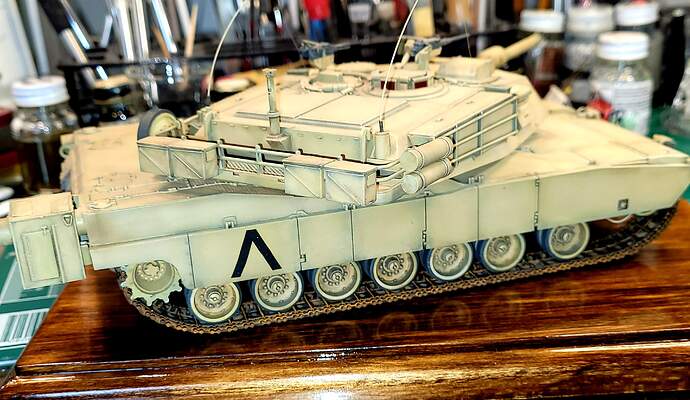 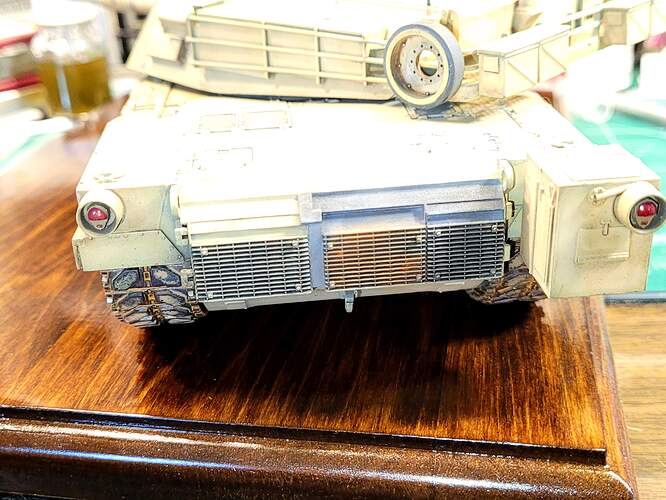 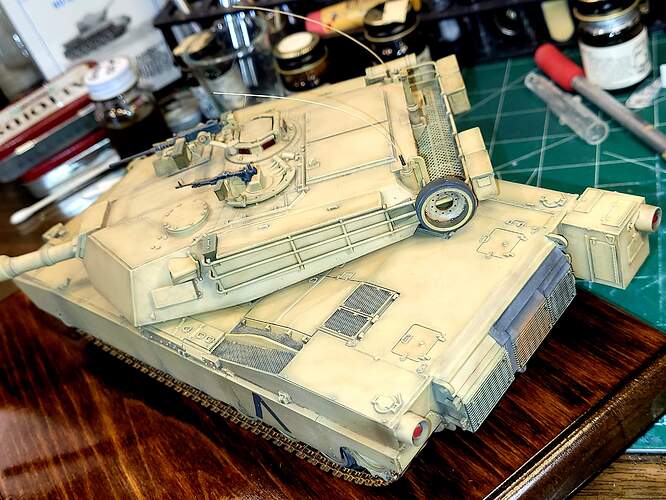 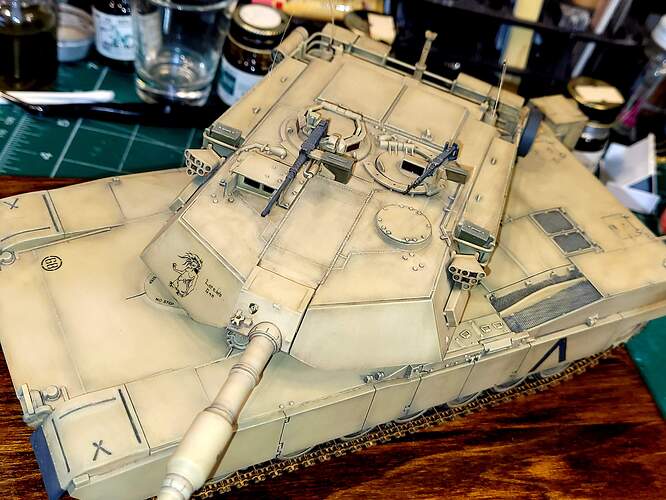 Back I the day, my super secret tech was to used 35mm film stock for the anti-laser glass. 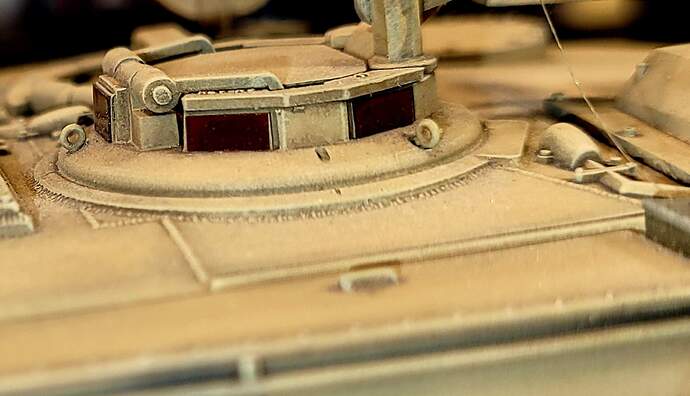 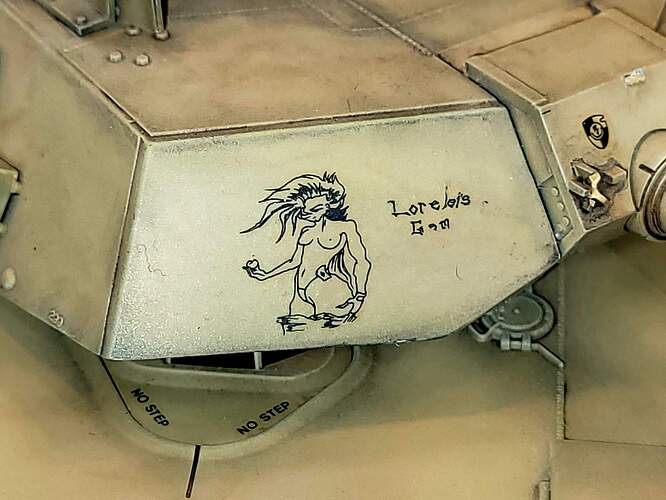 Built this one back in the day as well. Can’t tell it was busted up by looking. Great repair job.

Really great build, even better as a recovery/rebuild!
One small thing, in ODS the optics did not have the red anti-laser coating. May be too late to change that though. Still looks good!
Ken

Good rebuild. A couple things still missing/off though. The coax MG barrel cover to the right of the main barrel is missing. Also, the antennas should be dark green, not sand.

Great job on the rebuild. I love the finish

Thank you all, I appreciate the comments and suggestions.

The coaxial MG cover maybe one of the long gone parts. I’ll see what can be rounded up for a co-axial MG cover.

I will touch up the antennas with dark green as that’s an easy fix.

What would be the correct look for ODS M1A1 optics? Suggestions on how to model that?

I’m reluctant to try fixing the red tint optics error on this one but would like to know for future builds. Thae red tint will remain a legacy goof up.

Looks very nice!
I agree with DV, I cant even tell it was ever broken from the photos.

What would be the correct look for ODS M1A1 optics? Suggestions on how to model that?

The best option would be to paint over them with Tamiya Smoke. But you could just leave them as you say, a legacy goof up. I have plenty of those.
Ken

For an 18 year old recovery that’s a sweet build Wade. I really like the pre-shading. Nice overall weathering.

Will probably have a small update for it with a spare MG cover from Ezra, (@Panzer_modeler) and tweaking the antennas colors.

First thank you very much to Ezra @Panzer_modeler for providing a MG barrel sleeve.

Likewise, thank you to Gino @HeavyArty for pointing out the antennas should be dark green. They are now dark green.

I didn’t come up with a suitable method to address the optic glass color but again thank you to Ken @tankerken for the suggestions. 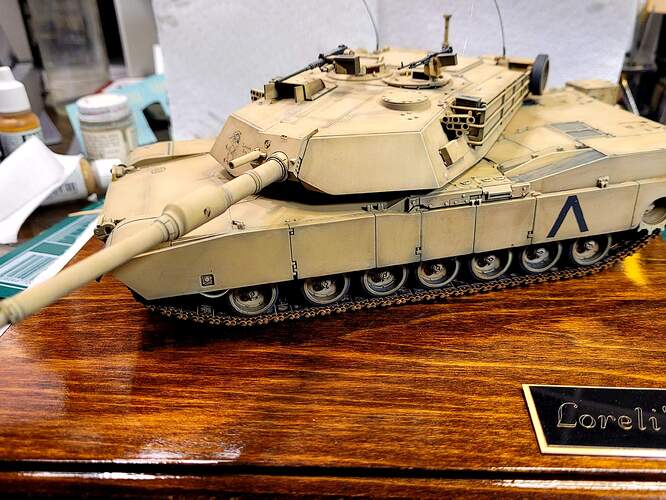 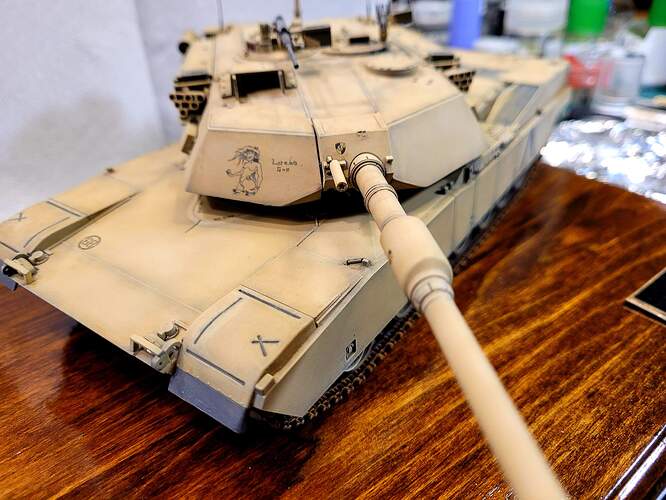 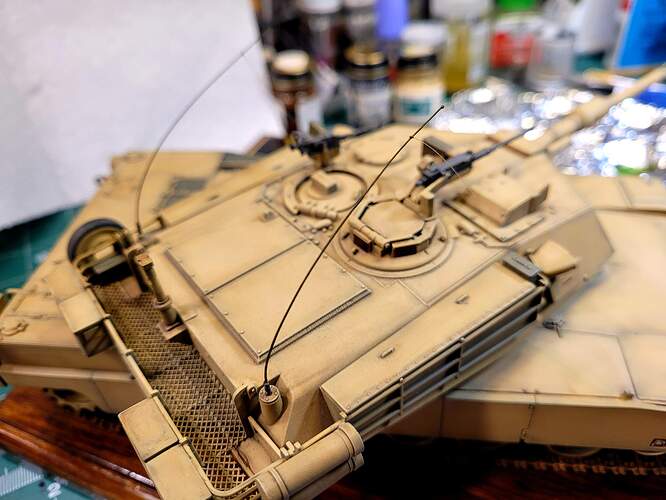 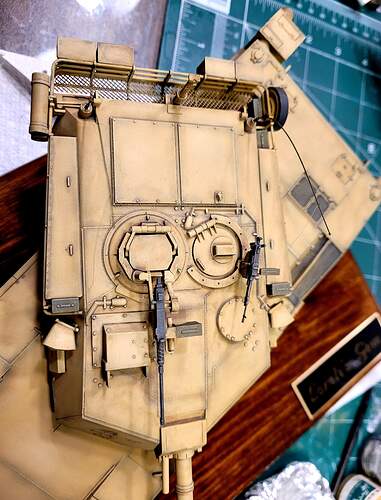 Really nice job. The mechanics can be proud of what they did

You had to go and point that out, didn’t you 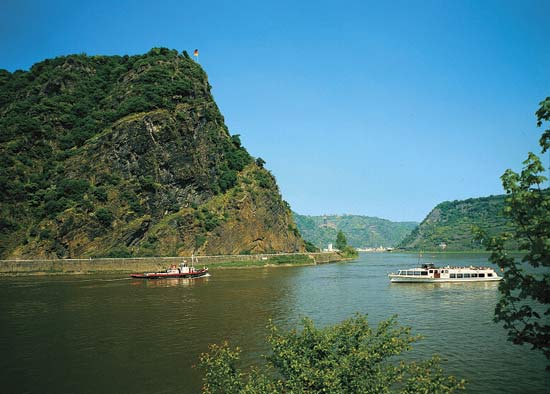 Lorelei, German legend of a beautiful maiden who threw herself into the Rhine River in despair over a faithless lover and was transformed into a siren who lured fishermen to destruction. The myth is associated with a large rock named Lorelei, which...

That’s such a nice legend

Not necessarily. It is more likely to be named after the TC’s girlfriend (Loreli = pronounced Lor-L-Eye) or the last name of the TC (Lo-Rel-E).

Not necessarily. It is more likely to be named after the TC’s girlfriend (Loreli = pronounced Lor-L-Eye) or the last name of the TC (Lo-Rel-E). 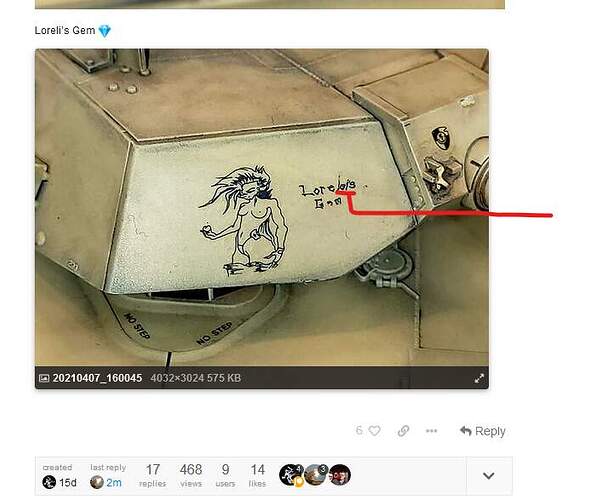 Oops. I misspelled it, but still contend it is probably named after a girlfriend or the TC’s last name. Based on what I know of soldiers, I doubt it is named after a German legend about a maiden and a big rock. We may never know though.