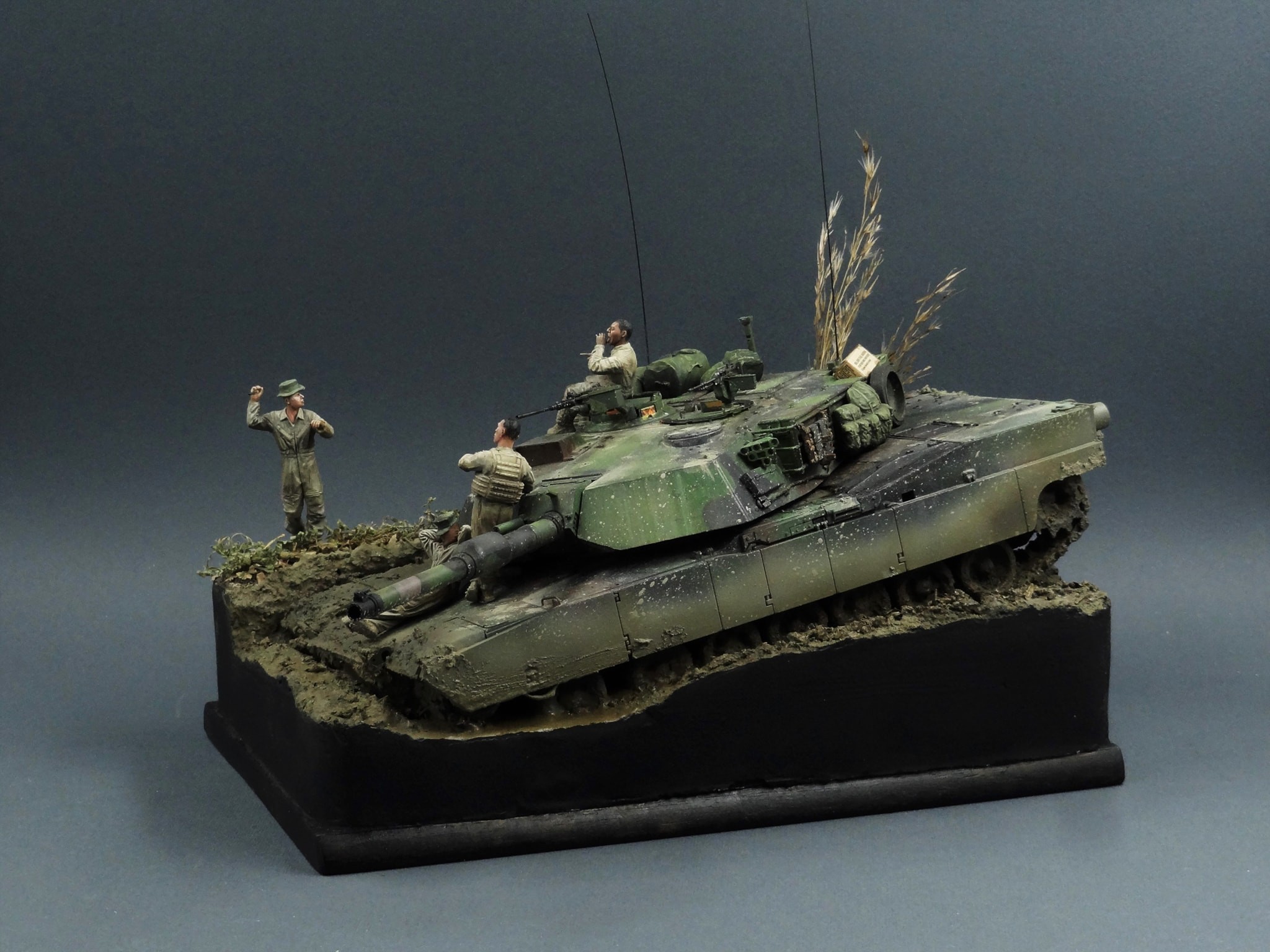 This is partial text from the full article (usually with photos) at https://armorama.com/news/m1a1-abrams-diorama-inspirations-by-shi-zheng
1 Like
HeavyArty September 17, 2021, 8:53pm #2

It looks good and he did a really nice job overall. A couple issues though. First, it is an early M1A1 with the cover on the primary sight box having a sloping rear (looks like the Tamiya ODS kit) but the gear, especially MRE boxes and sleeping bag stuff sacks (from newer Tamiya US Modern Accessory set, 2000s), are more modern. Also, it is a US Army tank (IDed by the smoke grenade launchers), but the crewman laying on the front slope is wearing a USMC 8-point hat and the leaning guy is wearing a modern USMC body armor vest. Lastly, what is the guy standing on the bank throwing?

It looks like he used this crew set (with some switched heads/hats), which is totally wrong for this tank. 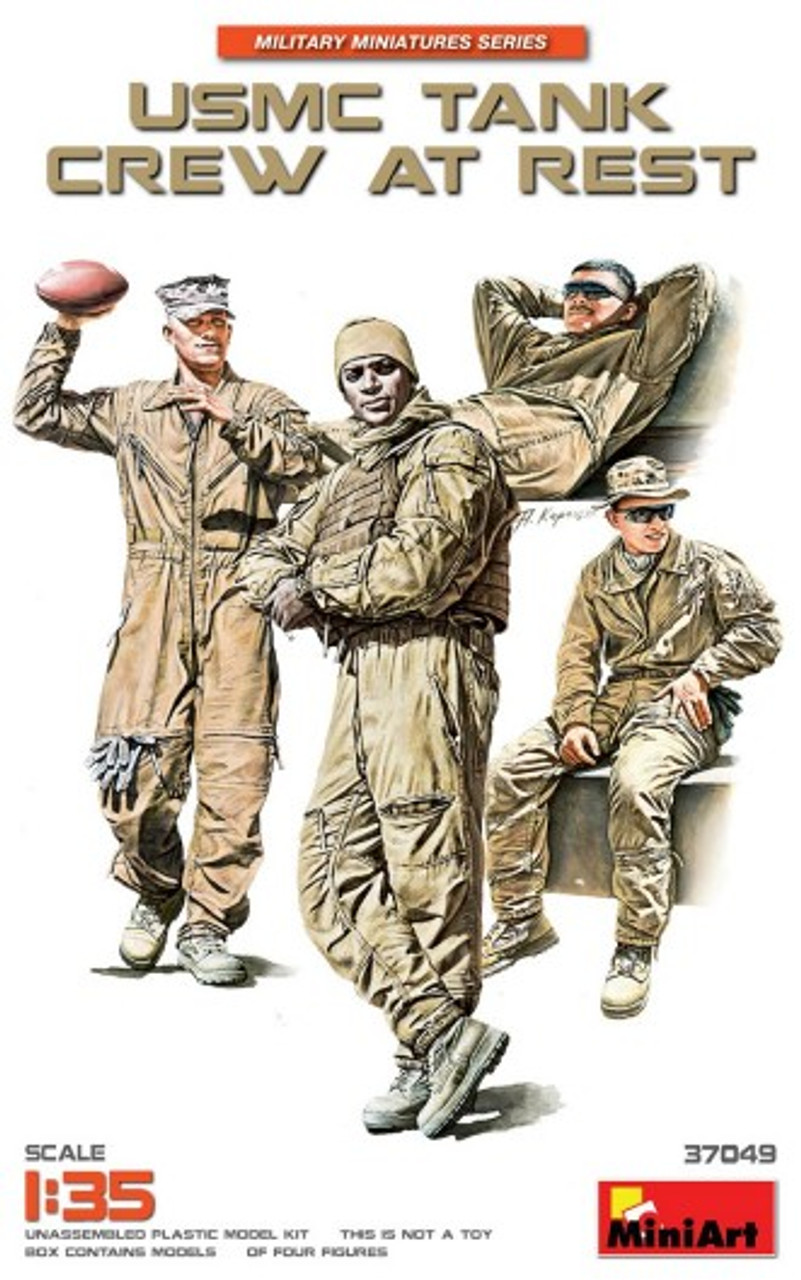 I was actually in a very similar situation in Ft Riley Kansas.

The hatches wouldn’t be closed.

Regardless, mah bruthas are stuck in some serious ground work!

Also, could be my buddy, “Space”… back in the day when he was at Fort Benning!

Reminds me of getting stuck on a spider trail at Hohenfels back in the day. Company CO jumped track while we had to deal with the recovery. 2 M88’s a couple days later and we were out. Wish I had a camera that day, it was a mess.

If you want something to be 110% accurate then HeavyArty is probably right, but this is how I do my building and scenering as well, so I think it is fantastic! Love the mud on the tracks, tank dug itself into the mud, crew just waiting for help… great!

I think it came great. Nice job on the tank, figures and terrain. Except for the issues Gino pointed out, very well done.
Mike I didn’t know Fort Benning had a tank school. I thought the armor school was at Fort Knox. Interesting

Mike I didn’t know Fort Benning had a tank school. I thought the armor school was at Fort Knox.

Oh really ? Wow didn’t know that. Any reason why ?

Not 100% sure why. Looks like BRAC was in the mix.
https://www.benning.army.mil/armor/earmor/content/issues/2013/JUL_SEP/ArmorSchoolMoves.html

Yes I remember whenever BRAC would come up ; those of us in the Guard/Reserve would get a little nervous. Many times over the years they wanted to close or move the unit I was in.
I see they moved the armor center to the Harmony church area of Benning. I went through basic and AIT there, lots of fond memories there lol.

It’s all good. I just recall going to Knox for 2 weeks for tank school in the late 90’s.

16 weeks of those dudes screaming at us.

I was there for TC&Gunner school/NETT/MOS crossover training whatever the official name for it was. I spent my time focused on gunner skills as I wasn’t going to be TC anytime soon. Helped us score 2nd in the company at table 8 that year much to surprise of everyone else. My driving portion was ojt and ended when the Company Gunny or Sgt Maj caught us. He was not happy about that.

I did spend like 6 months at Ft Lost in the Woods for my first MOS school after 13 weeks at Basic and 4 weeks at MCT. After basic they don’t babysit you anymore.

It’s all good. I just recall going to Knox for 2 weeks for tank school in the late 90’s.

Was that 2 weeks just to learn how to open the hatches ?