Hello all
Does anyone know who makes a 105mm gun breach in 35th scale? Thanks in advance.

Other than bogarting one from a kit like this, no. 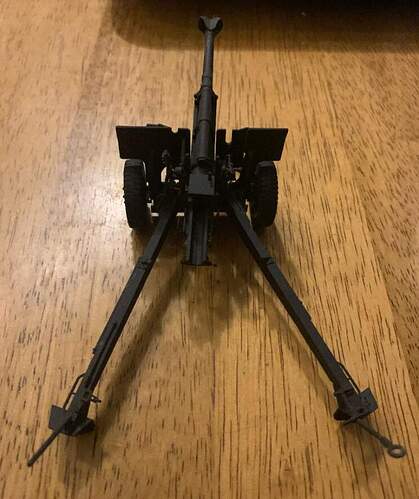 But it’s a basic cube shape with a hole drilled into, and then a side section taken out. I’d bet you could make one in about five minutes and save $15.00.

Yes I was thinking about that after looking at some pics online. Doesn’t look too hard . Thanks for the reply!

Robert, is that the same gun as the m2a1?? The barrel looks different from the tank gun.

Armoured Brigade Models in Canada made a rather excellent 105mm M4 turret which I think contained the rear end of the ordnance as well as other turret details. Unfortunately the company appears to have closed but you might find one second hand.

I have plans for mine though.

Thanks Robert I’ll try to hunt one down. Or I could scratch build one as 18B suggested, I’ll see what I can find

Did the 105mm armed M4s use the same ammo as the towed piece?

What does semi fixed mean ?

In a standard round, the projectile cannot be removed from the case, and there is a fixed amount of propellant behind the projectile.

With semi-fixed ammunition, the projectile is somewhat loosely fitted into the case, and the powder comes in increments held inside bags that are tie together. Prior to firing, the amount of powder needed is calculated, and unneeded bags are removed. They are still attached to those other however, and are left hanging outside of the case as the projo is replaced This way the gun chief can quickly verify that the round has had the proper number of powder charges removed before firing. I made some cool videos last year when I fired the M119 and the Trip Seven. I’ll see if I can’t post them here.

Oh ok yeah that would be great to see those vids. So semi fixed ammo is still used correct?
Sorry I know nothing about artillery lol. Thanks

I think this may actually work:


https://i.imgur.com/lHinjbr.mp4(image larger than 4096KB)
Some things to notice that substantiate things I’ve said many times over the years, and also shows that the casing does NOT automatically extract, but rather must be pulled out of the breech.
See this thread:

Notice the crew chief verifying the round. The excess charges are not hanging out (they sometimes get clipped off when reassembling the round) but you do see them handed to him a moment later. Notice also the loader says “Oh sh**, my gloves” because she knows she shouldn’t wear them when loading as they can get caught. At the last second you can see her shove the round in with her fist. After firing when she extracts the case, you see her flip it over the trail. She almost stood it upright, which they note in the video. It would have earned her another beer.

Yeah she was doing fine !

Is there supposed to be audio on this? It’s all silent. Otherwise, great video.
Ken.

Here’s another stupid question for those of us who were not in the artillery: if those powder bags get wet , do they still work ?

No, wet powder will not burn, or at least not burn fully, which can be dangerous. Always keep your powder dry.