Making sure seams are really gone

I’m building my first few aircraft since getting more serious about the hobby and boy has it been an exercise in frustration.

I finally got to the painting stage, and have three mustangs, all different variants of the accurate miniatures ones, lined up for paint.

I primed the first one tonight. And all was going well until I primed over where I have filled the fueslage seams. I had filled them with mr surfacer 500, sanded, and repeat until I was sure they were smooth, went to prime and ALL of the seams I filled popped out, some worse than others. Some look like a sunken line and some are still sharp.

How do you ensure the seam lines are gone before priming? I think this one might turn into a mess

but I would like to correct it on the next one

Also how can I salvage this? 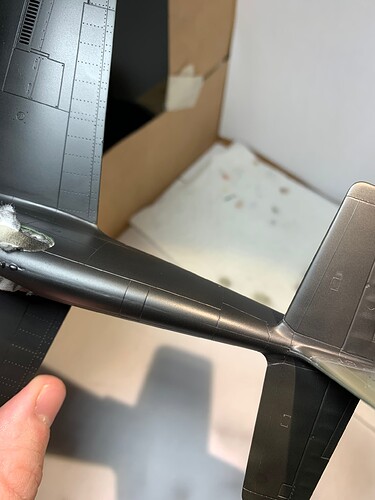 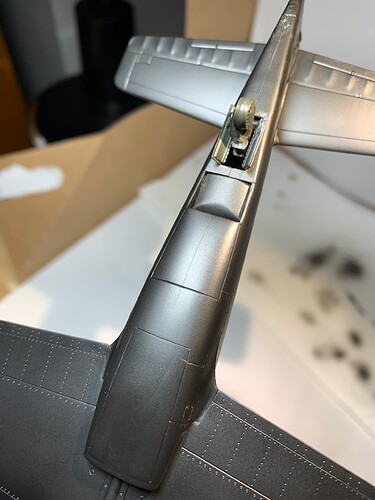 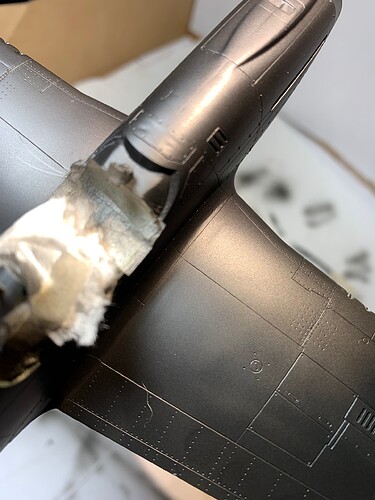 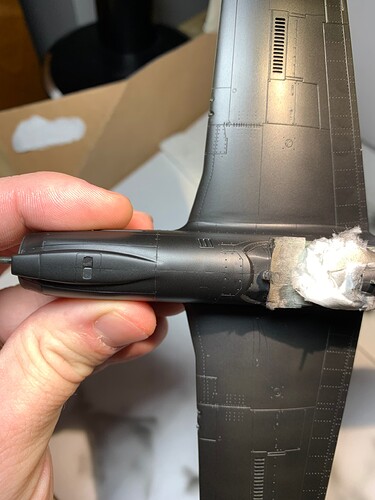 Stop using fillers, putty and all the other crap (pardon the language).

Once you have contaminated the joint with filler, putty, self levelling putty/paint it will be more difficult to salvage.

The advantages of this method are that you already have the filler material littering your workbench, no need to pay for putty (save up the cash for one more model), you are filling with the exact same material as the parts in the kit. The goo’ed up stretched sprue will be slightly softer since the bonds between the plastic molecules have been loosened and the material will not return to the tight and compressed state it had when it popped out of the molds.

My problem with all kinds of putties is that I have found it very nearly impossible to get rid of that sub hairline edge at the end of the putty. Plastic blends into plastic a whole lot easier.

You can save that plane with a lot of work but it will be frustrating.

.His method works on armor as well (2 piece gun barrels). I’ve used this (his) method for years. You need to let the plastic soften up, letting the plastic work against itself. And pay attention to how much glue you apply. If will take very, very little to get this to work. You would be surprised how little it takes. Pretty much letting the capillary affect take place within the joint/seam. Let dry completely…maybe 24 hours or more. That’s my 2 cents.

One issue with this kit is that there was a prominent step on the bottom of the fueslage join that required putty to even put. But the other joins I could have used stretched sprue

Bending the fuselage on both sides a little might have helped with the step and/or adding bracing to expand the short side.

Gluing on strips of thin styrene sheets (plasticard, evergreen et.c)
can assist with smoohting out steps

Getting it alinged from the beginning is vastly preferrable though …
Dryfit, dryfit, dryyfiiit and all your problems will go … sung like some Salvation Army song

Guess I have a lot to learn about aircraft modeling. The first four kits I’ve attempted are riddled with fit errors I’ve never experienced with armor.

And these are fairly decent kits, not matching Tamiya for fit but way better than others.

Want to guess why I stick with armour and vehicles?

The mustangs haven’t been too bad, just that annoying fueslage step.

The icm spitfire I tried making was a dumpster fire, nothing on that kit fit correctly

Yeah the old ICM kits are not known for good kit the newer ones are better but still not shake and bake like Tamiya.

Best thing with aircraft is start cheap and build up your skills as unlike armour some aircraft kits will fight you all the way. Even some new kits will test your patience, but at the same time if you want something off the wall then you have to go the limited run route and know you will need patience, filler and sanding. However with that said some fantastic results can be achieved.

That’s what I thought I did here, picked up each mustang for $20, if I can get the seam gone I think they will look okay.

Inspecting the two I haven’t primed yet I was probably a little light on filler, ive over filled the seam now and will sand it down smooth on all three before continuing

Use Robin’s method as he described above, get an empty clean glass paint jar with lid, important that you have the lid and the jar is glass, add a little amount of MEK, Tamiya or similar liquid cement/glue then add a small piece of sprue. Fit the lid and leave it overnight. Next day you should have liquid plastic, by varying the amount of glue to sprue ratio you get thicker or thinner consistency.

Filler is fine but if you have large temperature fluctuations (don’t know what the climate is like where you are) the plastic and the filler expand and contract at different rates which can lead to cracking. Plus as noted above nearly all fillers shrink slightly as they cure.

Good luck with your builds.

I’ll defiantly use that going forward. I think it’s too late on this build with primer down and filler already contaminating The joints

Agreed the good Reverend of Styrene , Pastor Robin speaks the truth.
Another option to add to that is sprue goo . Apply with a tooth pick or the stub of stretched sprue.

Lesson learned, very frustrated and on the cusp of binning all three planes and moving on

Great thread and great tips. @Robin_Nilsson: it would be great if there were a techniques category int he forum. It would make finding this again later a lot easier. I was looking for a post you did on separating parts from the sprue which I thought was quite handy and I couldn’t find it. (But it may have been in the old forum.

Don’t do that. There is other aspects to practice on those kits. It’s all lessons learned.

Before you bin them, I have another suggestion you might try and it won’t matter that you’ve already tried something: mixing superglue with metallic pigment (that just makes the glue visible). There is a video on ADSTube: My Preferred Method for Removing Seam Lines - YouTube.

I could give that a try, the seams lines are quite small, not large gaps so this might just do the trick.

What’s your preferred method for cleaning up the glue? I often avoid super glue cuz I usually make a mess and at least when I make a mess with putty I can wipe it up with IPA.