This is Monogram’s 1979 issue 1/48 AV-8A/GR.1 Harrier kit. Of the Harriers in 1/48 available at that time (Tamiya & Airfix), this was the best kit out there of the subject. It’s only shortfall compared to the other two is in ordnance included. This kit has been in my stash for nearly 40 years, being one of my “original stash kits”. So it is time to change that. 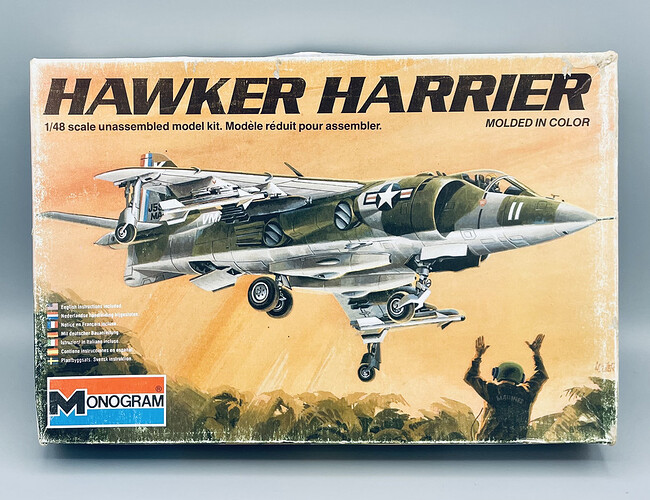 I’ll be using this decal set for markings options 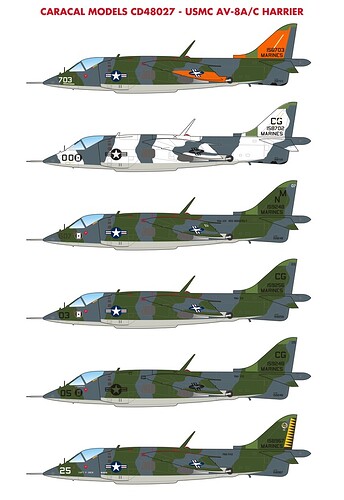 The cockpit has very fine raised details, and is pretty decent, considering it’s age. Back from when Monogram was setting the standard in 1/48 detail. 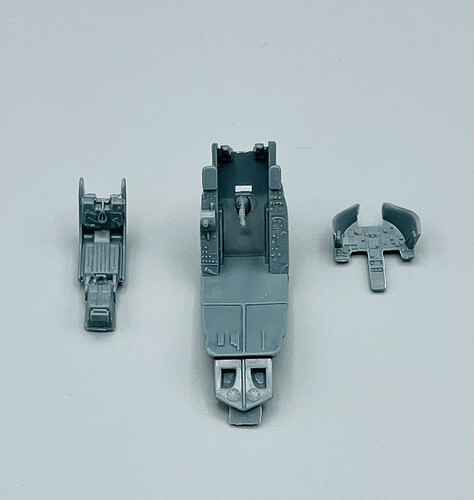 So far I have added the base colors using Humbrol enamels (go figure). Being that these were built in the UK, they were originally produced with BSC colors, which only changed when they were overhauled later in their service lives. 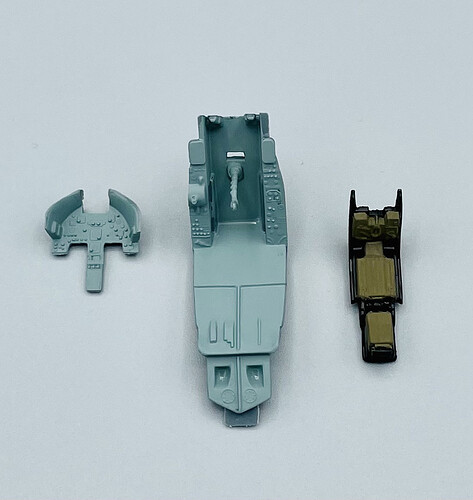 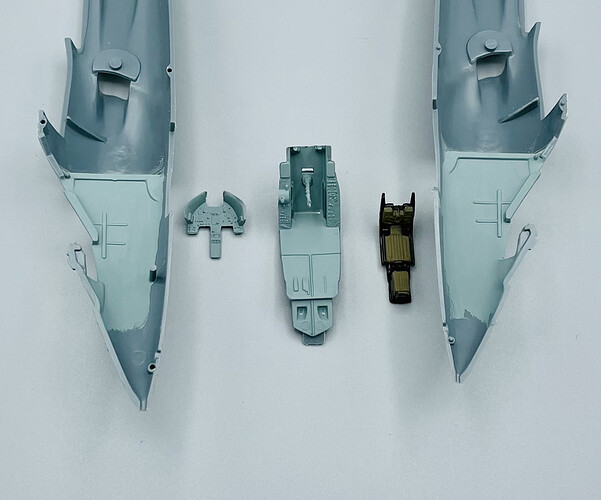 Aside from decals and ordnance, this will be an OOB build. The kit does not appear to need any major additions or replacement of details.

Nice start Carlos, will be nice watching this come together.

This will be a fun build! I really like old Monogram 1/48 kits just because of the cockpits.
If you need any 1/48 ordnance PM me and I’ll see what I can dig up and send you for free.

The kit does not appear to need any major additions or replacement of details.

The kit is not bad, I think a seat and probe are possible the only needed items. Royale Resin tires don’t hurt either. Look forward to seeing your progress, I have a few in the stash.

Johnny, Ezra, and Ryan, thanks for looking in and commenting.

Ezra, thank you for the kind offer, but I’m good on ordnance. I have several Hasegawa weapons sets, plus leftovers from multiple kits.

Ryan, yeah, I could add all sorts of AM stuff to the kit, but I’m gonna try to keep this as OOB as I can. But I will have to add the seat face curtain pull rings made from wire. Monogram missed that detail. 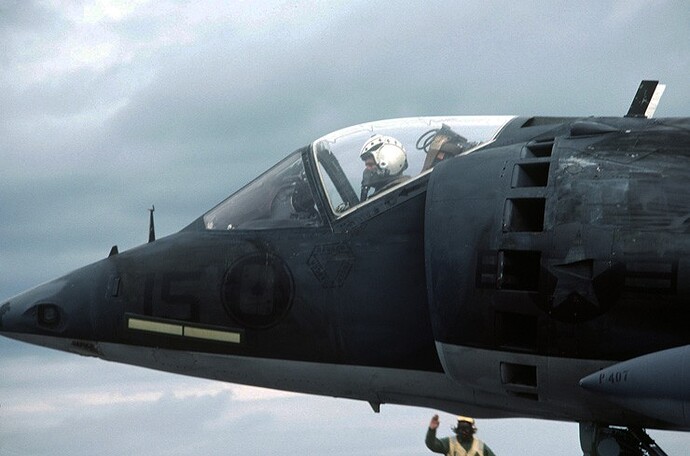 I could add all sorts of AM stuff to the kit, but I’m gonna try to keep this as OOB as I can.

I hear yeah. I only mentioned the few things that one can “see” easily. I think for a aircraft like this a pit replacement isn’t worth it.

I have you decided on the markings?

I have you decided on the markings?

I’m loving that winter camo scheme, I hope you go with that.

I would have to look for it but I had a pic for one option with 4 napalm bombs.

Can’t wait to see what you’ve got in store for us with this one.

@Klaus-Adler, nope, no winter scheme for this one. After looking thru my paints this morning, I’m leaning more towards the 70’s full color markings and RAF colors, as I already have those colors on hand. 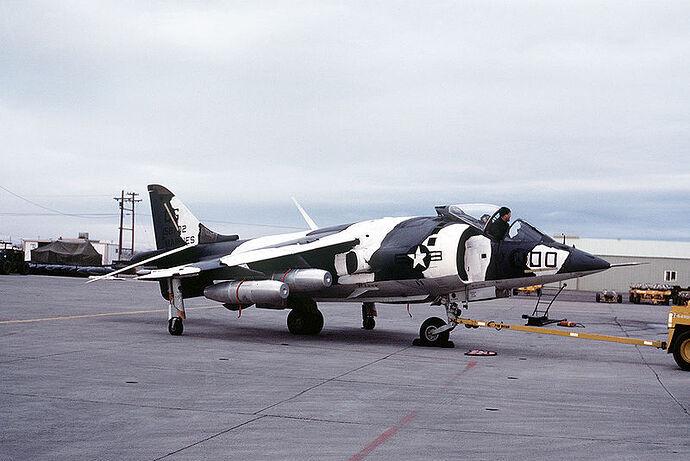 Nah, I’m actually thinking of some Rockeyes and drop tanks… 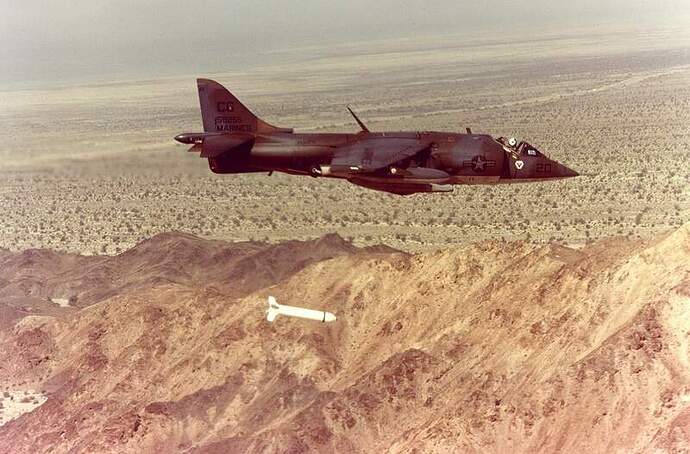 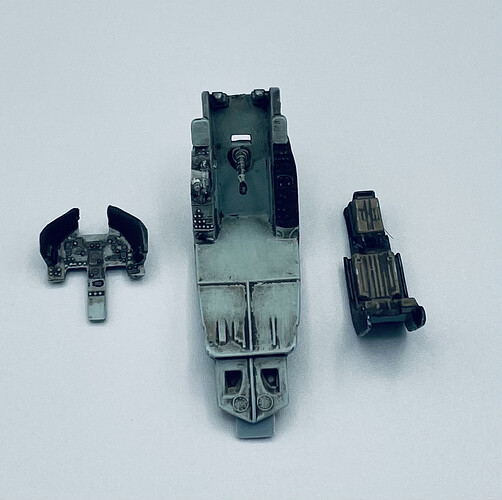 I have some instrument decals on the way for the IP.

Noice, what decals are you using for the IP? Asking for a friend who might do the same.

Thanks Ryan. I have some Airscale decals on order. They should be here in the next few days.

Finished up the ejection seat 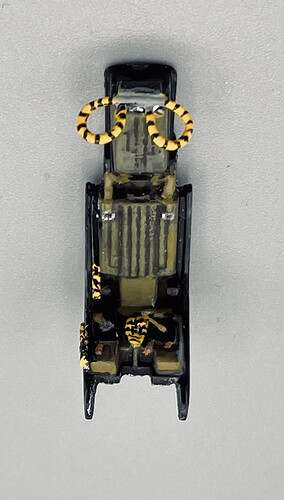 and I started adding the Airscale instrument decals to the panel 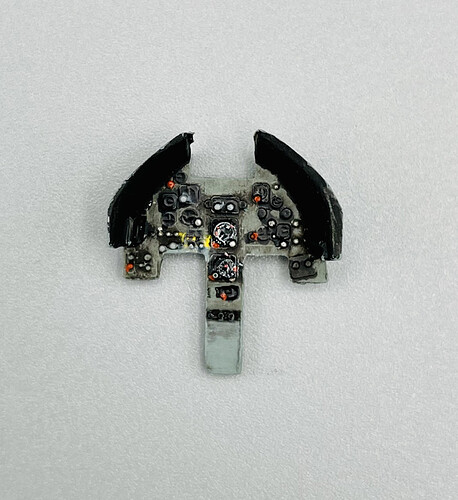 Thank you Joe. This one is not fighting me, so I’m happy.

Well yesterday I finally finished up paint and decal work in the cockpit. 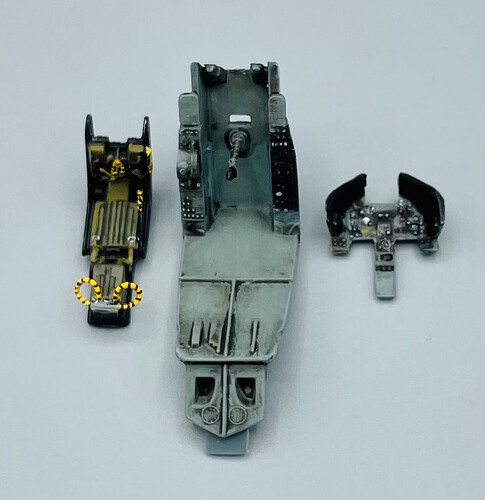 and for a little scale reference, the obligatory giant penny 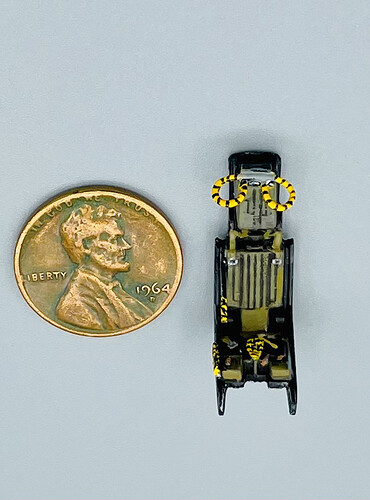 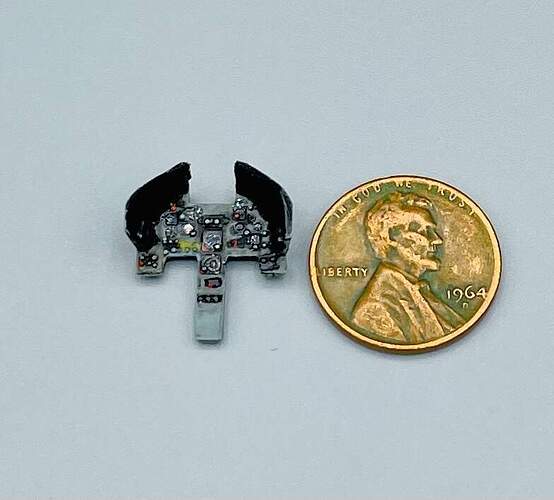 now I just have the wheel wells and intake area to deal with before I can get the fuselage closed up.

Looking good with what you’ve done so far Carlos. It really does lift the cockpit with the details like you have there.

Thank you Johnny. I just have the wheel wells and intake are to get painted up and installed, then I can get the fuselage closed up.