Motivated to do the AFV Club 251/9 by this photo

I’m kinda interested in doing one of these. Motivated by this photo:

I’m thinking this is the kit: 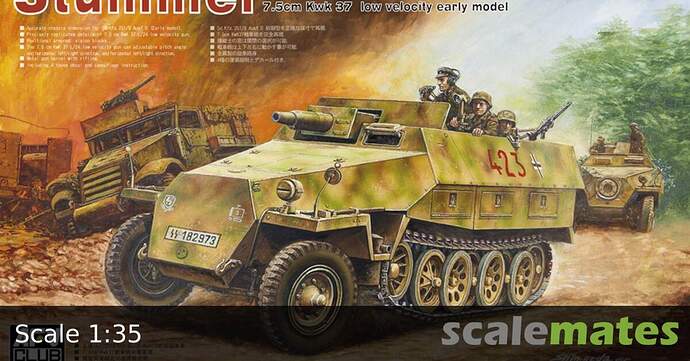 I hadn’t built much of AFV Club before. The Sd.Kfz. 251 was a quite a shock. I was used to Tamiya fit but this was much more primitive. I wasn’t prepared for how much work it would take just getting the holes and pins/tabs to fit. This was the basic “Stuka zu Fuss” kit. It seemed like all the holes were too small. But if you’re prepared for the work, it shouldn’t be bad.

FYI I think they had that kind of title in mind when they opted to have the minimum character rule. Be creative. I have faith in you guys!

I have not built this kit, but have done two AFV Club 251 variants and have been very satisfied with them. These are detailed models, with a good number of parts and some of them quite small so it takes a bit of work, but fitting was fine and the final result is worth the effort. 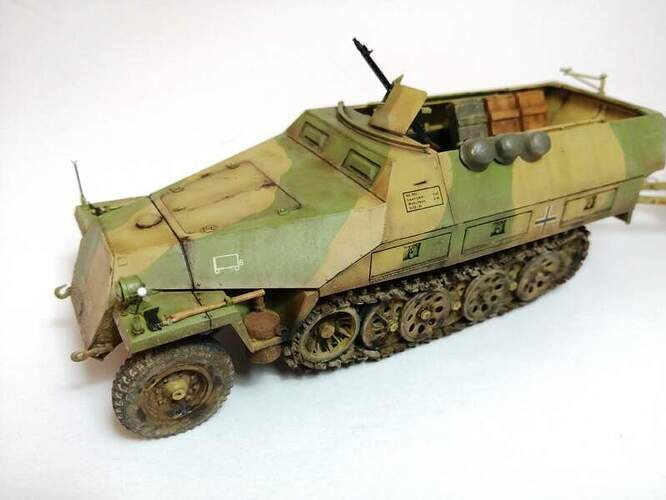 My remarks are tempered in that I was attempting to build 3 of these kits for campaigns (rocket artillery, engineering, and anti-aircraft) around the same time frame. I thought about the work required times 3 and got discouraged quickly. But, as you can see, they do build up beautifully in the end.

I built the Tamiya version and used the Verlinden aftermarket set to open up the engine etc - because, the Tamiya set is far superior to the AFV Club one in my opinion.

Can’t wait to see your actual project appear on the forum.
I’m going to build German WW II halftracks as well.
So it is always nice to look on how others are doing with it.
And to learn from others their work.

I’ve always found thr kit reviews on Perth Military Modeling to be very helpful and accurate. This might be of interest.

I’ve not built the kit. However 3 out of 6 AFV Club kits that passed through my collection over thr years and a large number of sink marks/sink holes to fill. So Perth’s comment about thr sink mark rings very true to my observations.

BTW FWIW Soap Box Comment - Eastern Front is a key modeling and history subject for me. Forty plus years of reading shows the Wehrmacht and SS are two sides of the same coin.

Basically no difference in their actions on the Eastern Front fighting a very dirty war in flagrant violation of the Geneva Convention against the USSR. Germany had signed the GC but the USSR hadn’t.

The dirty war of the Wehrmacht was quickly erased from the popular US public memory. The Cold War occurrence in the late 1940’s allowed revisionist history from several sources to recast the image of the Wehrmacht in many ways.

Of course NATO needed West Germany and that out weighed the need for historical accuracy in many ways.

For modeling I build mostly WW2 German AFV’s and had a similar dilemma and decided to avoid modeling SPECIFIC vehicles of the Wehrmacht or SS units and stick with hypothetical ones.

I have built two AFV Club 251 D versions and the 251/9 C version. Nice details. Some fit issues but they are easy to clean up. Just dry fit with patience. They turn out very nice.