I’ve recently started using the Mr Hobby Aqueous line of paints and totally dig them. However, since US distributors and shops are just now starting to get them, the line ups are incomplete. The retailers I can find that have them only have the lower numbered colors, mainly two digit colors like H52 (for example) and none of triple digit colors, like H331 (again, for example).
So here is my question: I need H331 Dark Seagrey, H330 Dark Green. Are any of the lower numbered colors close?

I don’t know about those colours, not had any experience working with the Mr Hobby line.
If it helps find equivalents, the Airfix Swordfish has Humbrol 123 Extra Dark Sea Grey and 224 Dark Slate Grey (a dark grey green colour) for the upper surfaces of the fuselage and upper wing, while the lower wing is painted in a lighter shade using 27 Dark Sea Grey and 31 Slate Grey.
Air Ministry guidelines stipulated that the lower wing of biplanes should be painted in lighter colours to counter the shadows from the upper wing. The Fleet Air Arm also had different camouflage colours to the RAF to better suit operations over water. So RAF greens and greys would never be seen on FAA aircraft. The upper colours are quite dark. The Extra Dark Sea Grey for instance, was still in use until the early 80’s on Sea Harriers and previously Phantoms and Buccaneers.
Humbrol are absolutely spot on for Fleet Air Arm and RAF colours so I would take those as gospel. If there are matched equivalents available in that line you should be ok.
I have an app called Hobby Colour Converter and I’ll have a quick look to see if there is anything in the Mr Hobby line matched to those.

According to the app,

Hum 123 is equivalent to Mr H 333 or Tam XF-54.
Hum 224 - no match although they do make their own acrylic version. Only equivalents listed are by Hataka and AK.
Hum 27 is saying H22 which seems to be a gloss? I can see in the Mr Hobby paint chart that they do have a Dark Sea Grey listed as H331 which might be better.
Hum 31 - no match and no acrylic version in their range. App claims Tam XF-25 is close, but having both in my paint box I can safely say is totally wrong!

I think you’re ok for the sea greys. It’s the slate greys that might be awkward to source.
Don’t know if anyone else can recommend anything or a paint mix using Mr Hobby?

Hope it’s helpful and not too confusing!
All the best with it and looking forward to seeing the build. Don’t see too many Stringbags.

The best wartime colour photo I have been able to find is this one. 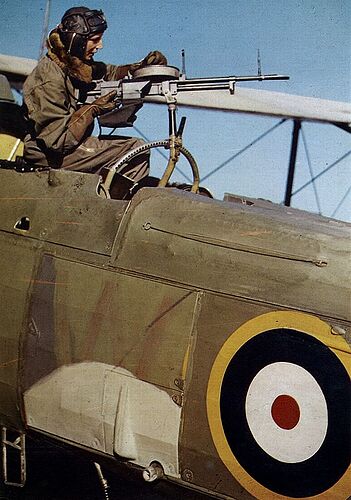 You can the Dark Slate Grey and a small patch of Extra Dark Sea Grey.
Might be possible to mix Slate Grey starting with Olive Drab till you get something close?