Well, I got the Russian stuff out of my system. For something to fight those T-34’s, some German. Tamiya Pz IV Ausf F. A nice relaxing build. I want to get to the figures, maybe this year. 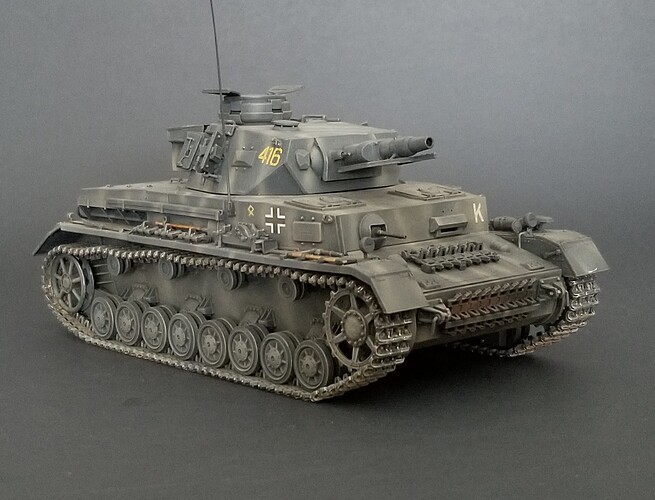 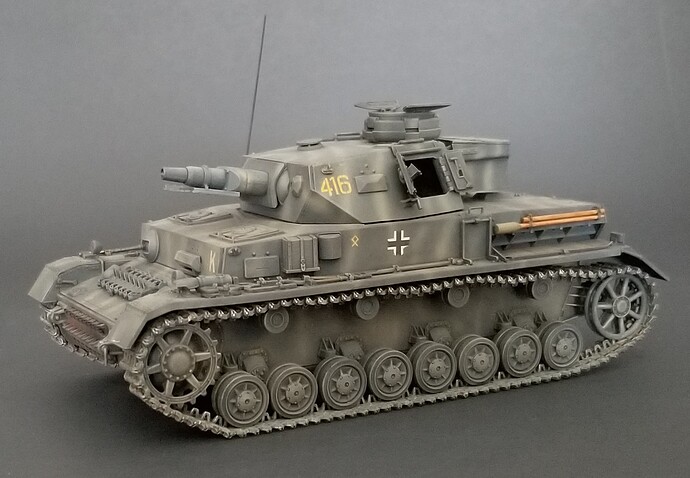 One of the guys in our model club passed away from Covid in late 2020. I was selling his stash for his wife. One of the kits was an old Tamiya Stug IV. I found it half built in the box, so couldn’t sell it. Decided to finish it in his honor. I added new pioneer tools from the Tamiya Pz IV set. Thanks again to guys on this site who bought stuff from me last winter. 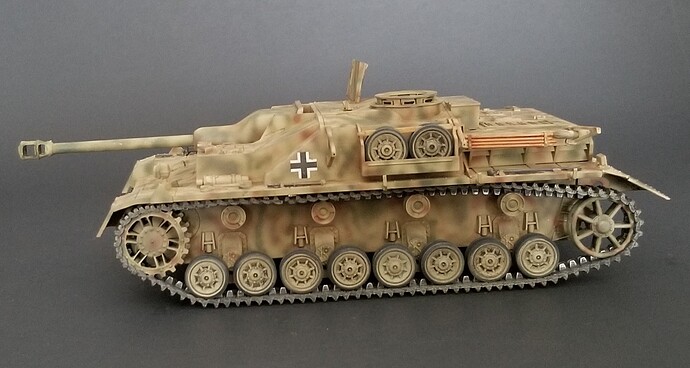 Next I wanted to shift to some US stuff. First up was a HobbyBoss T-26E1 Super Pershing. I added a RB Models barrel. 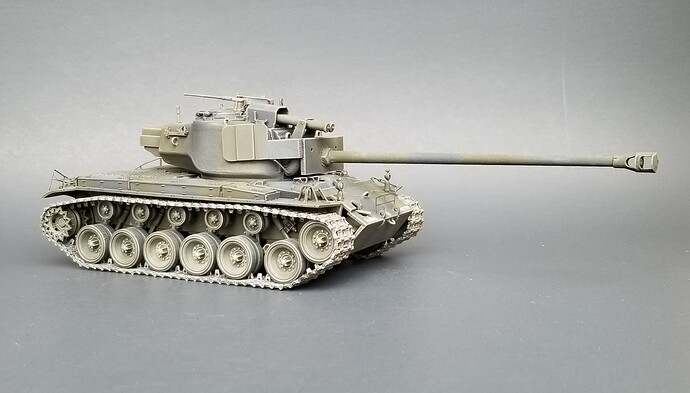 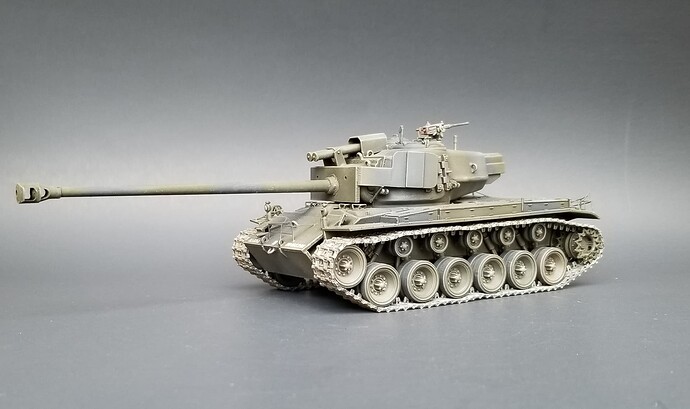 I’ve been waiting for a new M46 for a long time. Happy Takom came to the rescue. Nice kit. 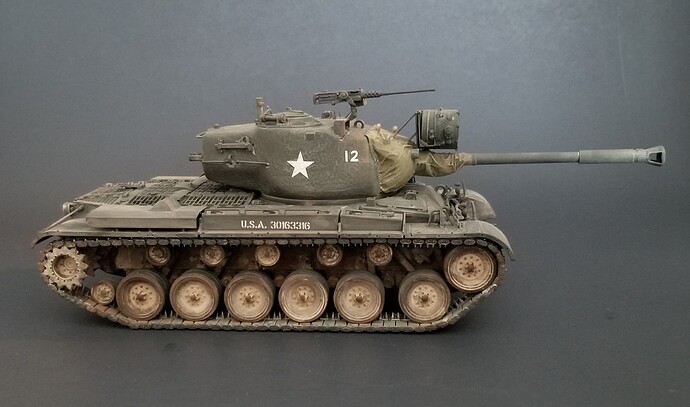 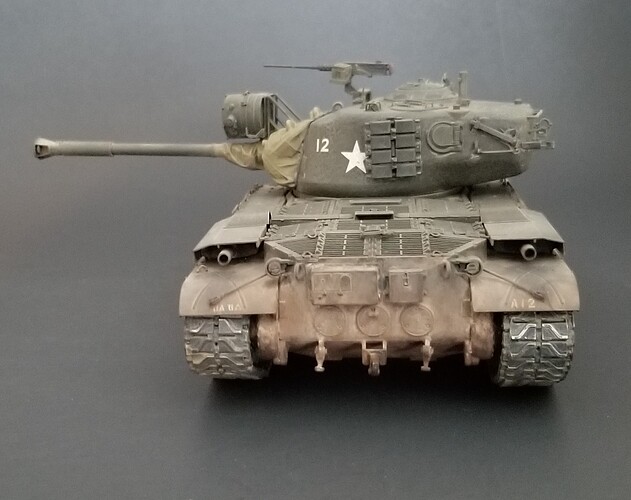 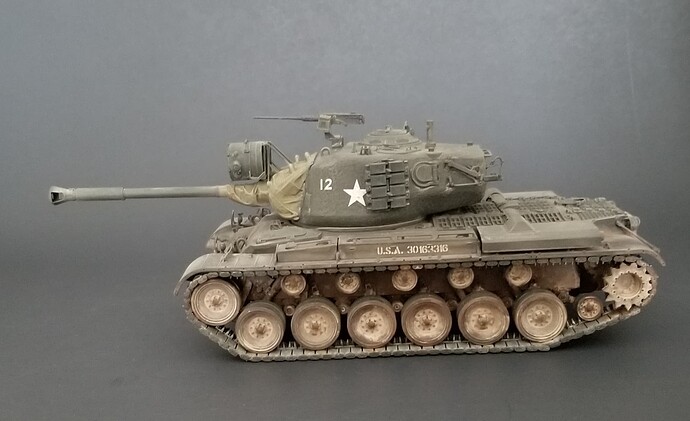 To continue the Patton family, I was going to do an M48, but wanted to get more info on the MG mount Next best thing was an M60A1. These were the US MBT when I was in the army and my favorite tank growing up. This is the Takom kit. A good blend of detail, but not so parts intensive as the AFV Club kit. I did steal the leftover searchlight from an AFV Club kit. I wanted to do a tank marked in 1-70 armor, the tank battalion of 4th Brigade, 4th Infantry in Germany,1979. I was in 2-20FA , our motor pool was next to theirs. I had to make my own decals for 1-70. I used AK Real colors for the MERDC camo. 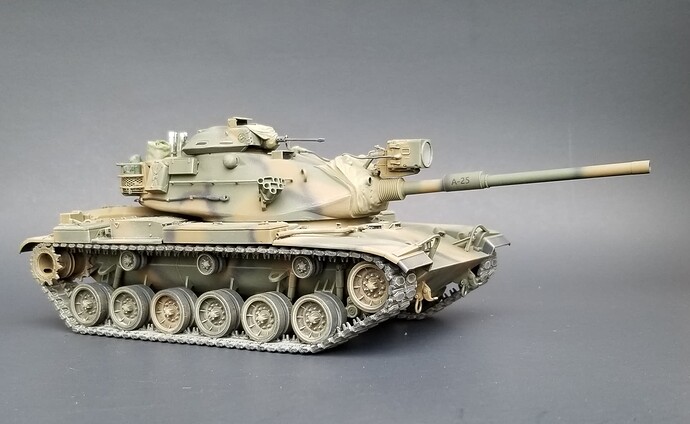 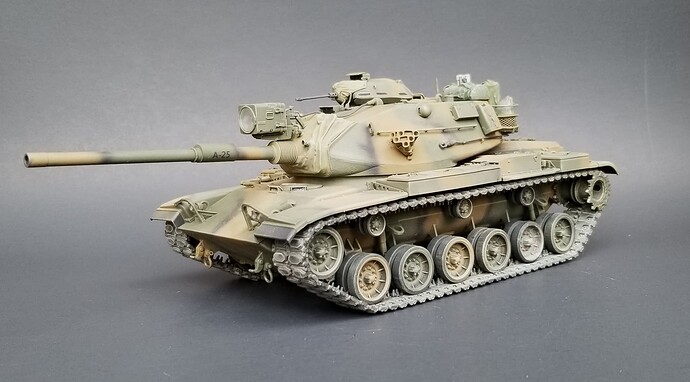 After, I wanted to see how the Meng M60’s built up. The Magach 6B Gal fit the bill. The kit was nice, but the kit tracks suck. The pins didn’t fit well and there wasn’t enough to do the whole run. If I did it over, I’d find some aftermarket tracks. 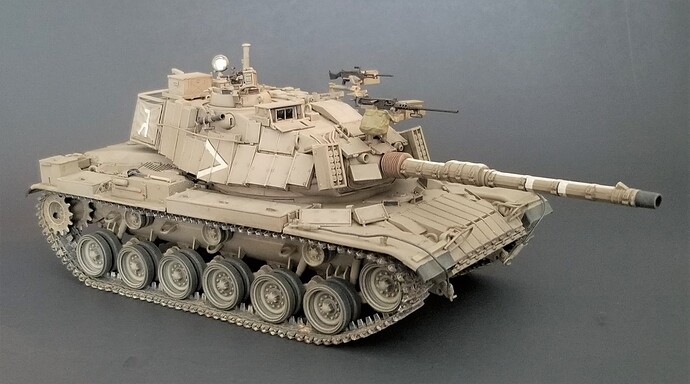 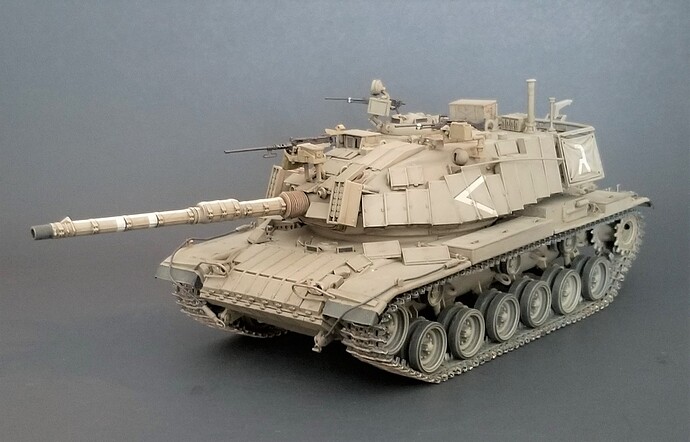 Several guys in our model club were doing some WWI stuff, so I kind of got the itch. First was the Takom MK 1 Female. I guess these were popular during the 100 year anniversary, but are getting hard to find. Kit is not bad, except for the Drivers cab. Mk I had a narrower cab than MK IV. Takom just used a Mk IV cab. Here’s the problem doing research, once I learn of a major error, I can’t un-see it until I fix it.

: Rebuilt the cab out of card. Actually, it’s fun and satisfying doing stuff like that, once your finished. I really dirtied this one up and plan to do a base, maybe crossing a trench. I really procrastinate about doing groundwork though. 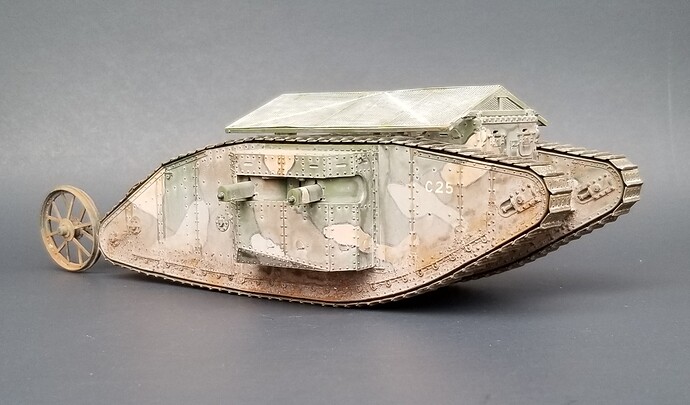 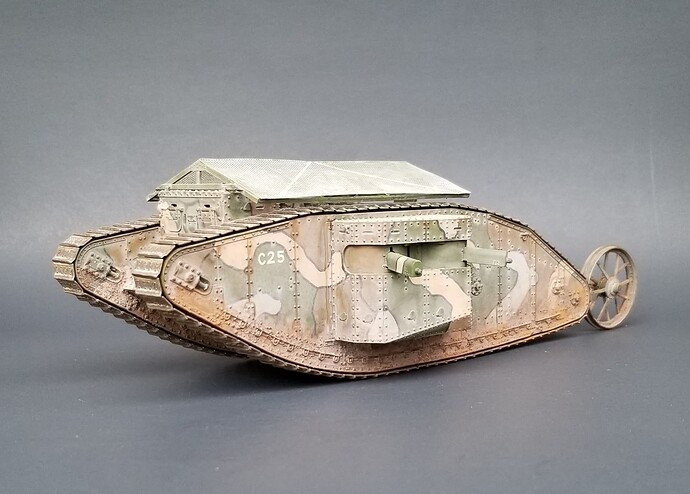 Gotta have a male to go with the female, right? Tamiya Mk IV Male. Added Aber barrel set. Could’ve done without the motorization. Wish they had an optional kit to drive down the price. It did come with the WWI figure set though. May have to do those walking with the Mk I. The tracks on both these kits were a breeze to assemble. 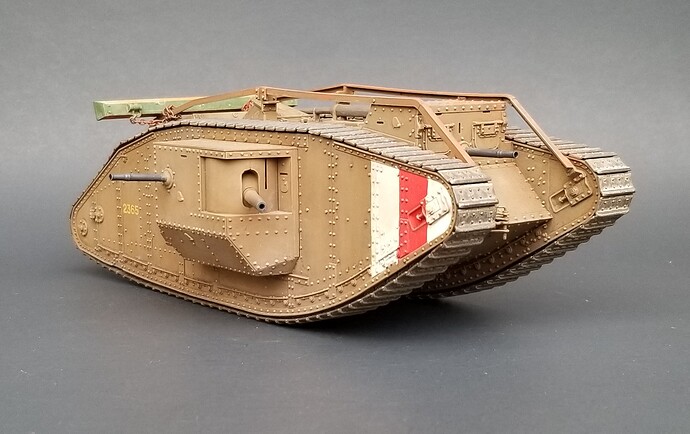 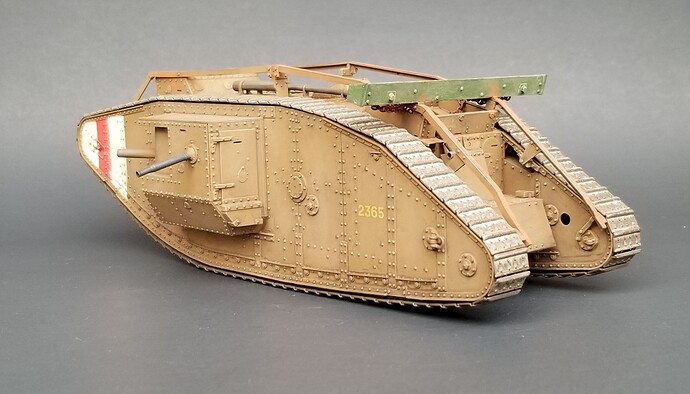 Continued on the British theme. The Takom Chieftain Mk 2. I like the look of the early Chieftain’s. I’ve built the Takom Mk 11 too, nice kits. 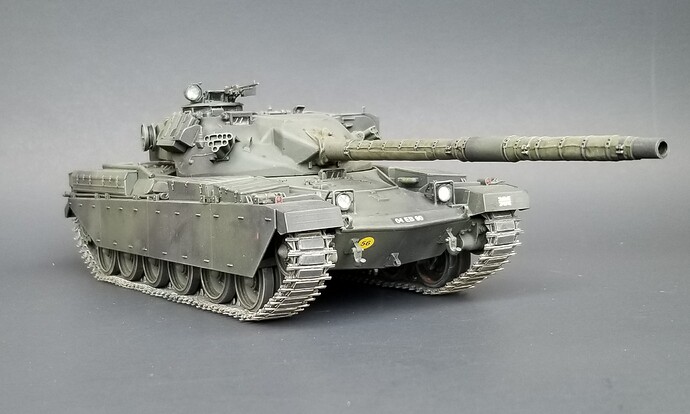 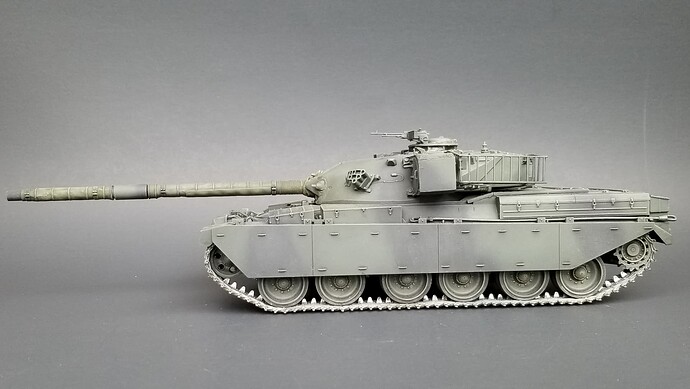 As a companion to the Chief, the Takom FV-432. Can’t believe it took so long for someone to kit this. No problems, but with a vehicle so long lived as this, harder to find reference for earlier versions. 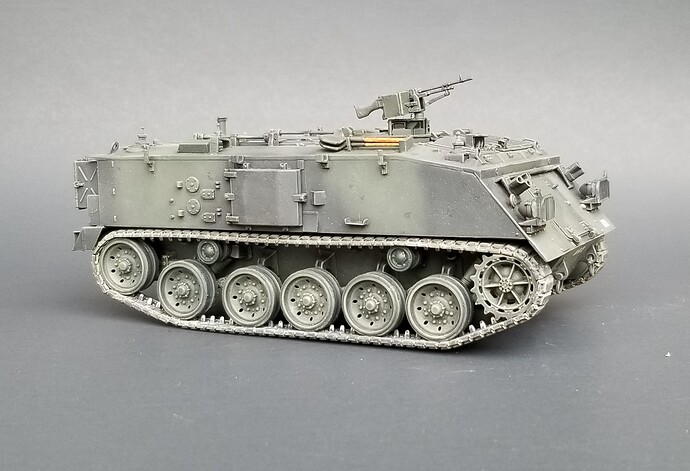 Then finally, while waiting for washes to dry and such, I fit in the Tamiya R-35. A sweet little kit, nice easy build. I do mean little. It’s tiny next to an S35, which isn’t a large tank. I guess I was thinking somewhat bigger because it’s called an Infantry tank. 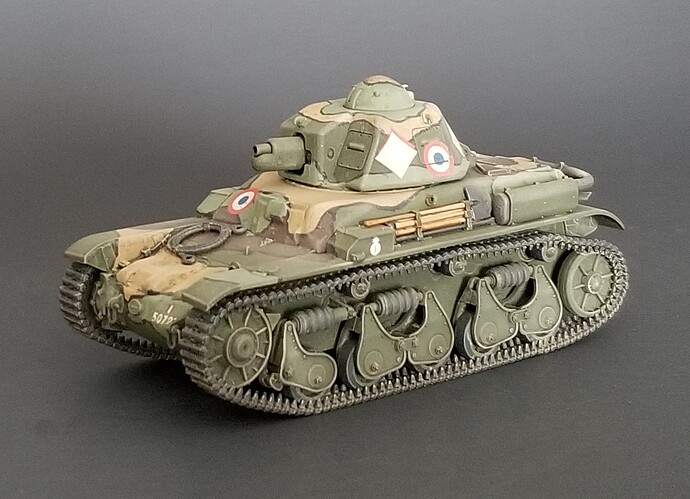 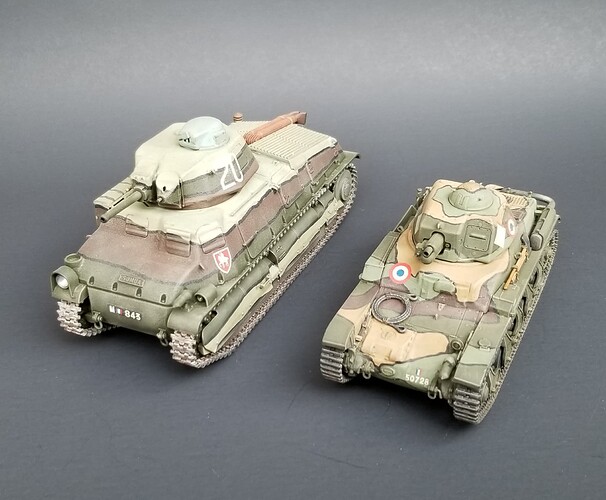 That’s an outstanding effort and result for 2021! Lots of diversity and all nicely done! A++

That’s fantastic work- I particularly like the Chieftain and the FV432.

Wow ! A lot of model for only one year.

I like the M60 particularly the wheels paint work.